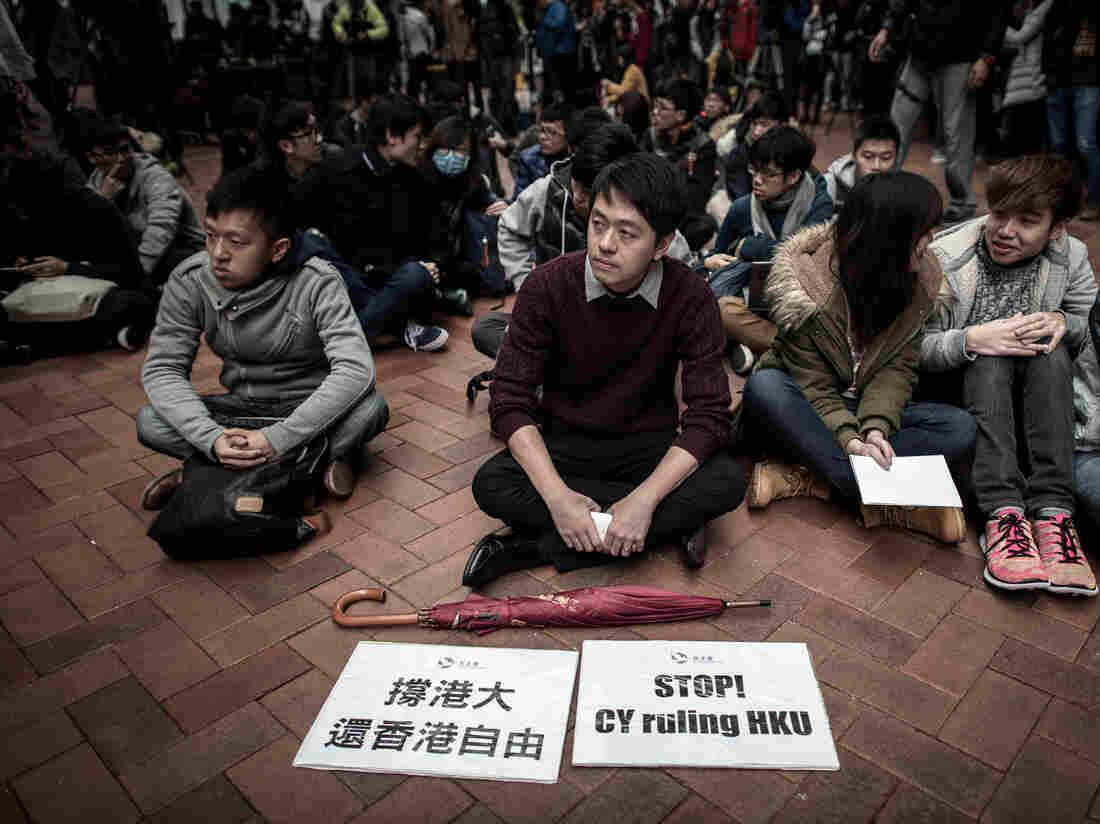 Students take part in a protest at the University of Hong Kong on Jan. 20. They protested after a pro-Beijing official was appointed to a senior role, amid growing worry over increasing political interference in academia. Philippe Lopez/AFP/Getty Images hide caption 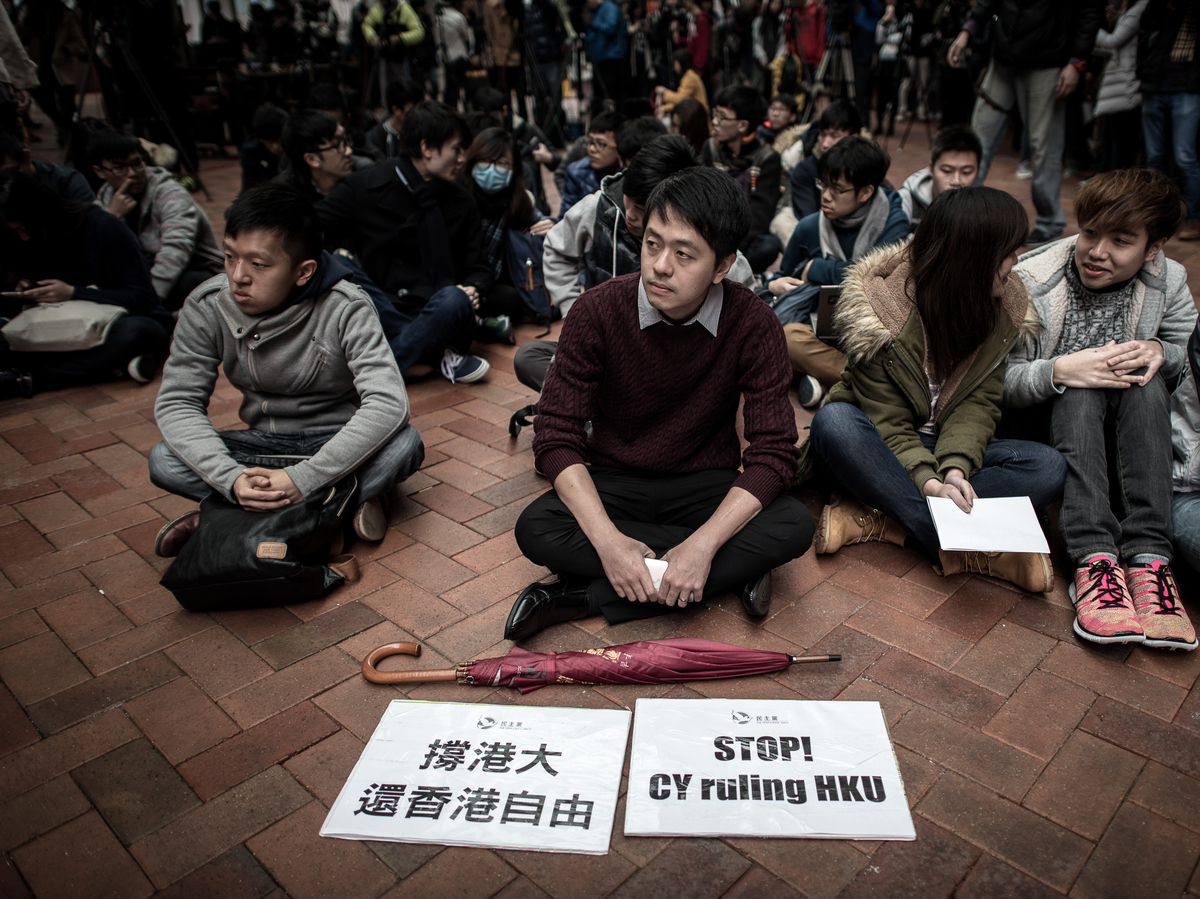 Students take part in a protest at the University of Hong Kong on Jan. 20. They protested after a pro-Beijing official was appointed to a senior role, amid growing worry over increasing political interference in academia.

Talking to some Hong Kong residents, you might think their territory was under siege. Their press is censoring itself. Its judiciary is required to be "patriotic." Even their mother tongue, Cantonese, is under assault, some believe, from Mandarin speakers to the north.

Now add academic freedom to that list, as pro-democracy and pro-Beijing camps have rushed to take sides in an ongoing battle over leadership of the territory's oldest institution of higher learning, the University of Hong Kong.

The dispute came to a climax on the night of Jan. 26, when students surrounded a meeting of the university's governing council. "Dialogue, dialogue," they shouted, jostling with police and demanding to speak to newly appointed council chairman Arthur Li. He refused.

"Mr. Arthur Li was protected by the police and sneaked away," says student leader Yvonne Leung. "So we could feel that he is not that sincere to have a talk with the students."

Leung opposes the appointment of Li, who is pro-Beijing, and led students in a one-week boycott of classes starting Jan. 20, to push for more democratic university governance. In 2014, she was a student leader in the Umbrella Movement, pro-democracy protests that occupied key streets in Hong Kong for nearly three months. 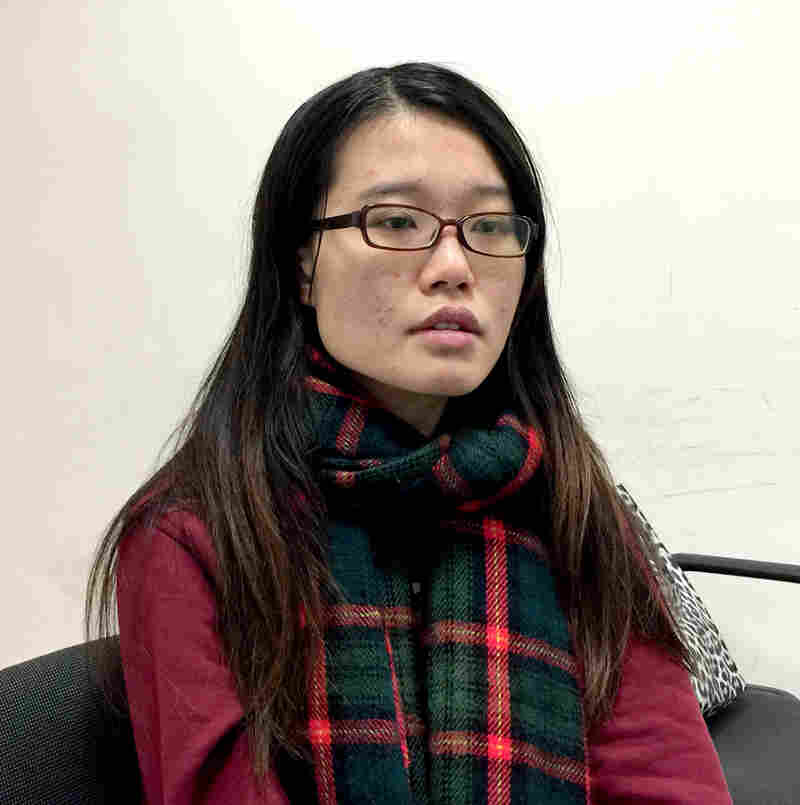 Yvonne Leung, the former head of the University of Hong Kong's student union, and a prominent figure during the 2014 pro-democracy Umbrella Movement, led students in a protest last month to call for a more democratic governance structure at the university. Anthony Kuhn/NPR hide caption

Li chastised the students and said they were acting irrationally. "Sadly, these small number of students are rather like someone who has taken drugs, who's been poisoned by drugs," he told reporters at a Jan. 28 news conference. "And they've been manipulated."

They were manipulated, Li alleged, by Hong Kong's liberal opposition parties, which want more democracy and less interference from Beijing. Li singled out Leung for criticism, pointing out that she was previously an intern with the leader of the opposition Civic Party.

In an interview at the student union, Leung points out that Li is a member of the Chinese People's Political Consultative Conference (CPPCC), the Communist-controlled government's top advisory body. "You can see the one who is politically controlled," she says. "It must be him and not the students."

Li, 70, is the British-educated heir of the founder of the Bank of East Asia, Hong Kong's third-largest bank. In addition to chairing the Hong Kong University governing council and sitting on the CPPCC, he also sits on Hong Kong's Cabinet. His critics accuse him of a high-handed management style, for which they have dubbed him "King Arthur."

Li is a political ally of Hong Kong's top leader, Chief Executive C. Y. Leung, who appointed Li to his job leading the university governing council. Leung, in turn, was selected by a pro-Beijing electoral college of Hong Kong elites.

As Hong Kong's chief executive, Leung serves as the ex officio chancellor of every university in the territory and has the power to appoint the members of governing councils that make university policy. The system is a vestige of British colonial rule.

Timothy O'Leary, a university governing council member and humanities professor, is pushing to change this arrangement. "At the very least, it leaves them open to the appearance of political interference," he says. "And even the appearance is bad, because that does cause people to begin to engage in self-censorship."

Critics howled political interference back in September, when Li helped block human rights scholar and law faculty head Johannes Chan from a top university management post because of Chan's ties to Benny Tai, a fellow law professor and a leader of the 2014 Umbrella Movement. Pro-Beijing newspapers in Hong Kong published a slew of articles declaring Chan a "mediocre scholar" who was unfit to lead.

O'Leary says the debate about university autonomy comes amid fears that Hong Kong's basic freedoms, including freedom of the press and judicial independence, are under threat.

"Those different kinds of freedom are all connected," he says. "If you lose one, you're going to lose them all. 'Academic freedom,' people will say, 'we haven't yet lost it, so what are you worried about?' The point is it's under threat."

Hong Kong citizens have successfully organized and resisted measures that Beijing and Hong Kong's government have tried to impose on them, O'Leary says. They were able to stop a draconian security law in 2003 and a 2012 school curriculum that some critics considered pro-Communist.

But the biggest protest of all, the Umbrella Movement, failed to win Hong Kong people the right to elect their own leaders or nominate political candidates. And that may be fueling pro-democracy activists' feeling of urgency now about the University of Hong Kong.

The school's governing council has said it will form a panel to discuss reforming its governance structure. The students want a clear timetable, but O'Leary urges them to give the panel time to work.

For now, the students and council chairman Li are deadlocked and have failed to agree on terms to meet with each other.

The audio version of this story says the students and council chairman Arthur Li refuse to meet each other. We should have said, as we do in the Web version, that they are deadlocked and have failed to agree on terms to meet with each other.