Accessibility links
In Iran, A Poet's 700-Year-Old Verses Still Set Hearts Aflame : Parallels The 14th century Persian poet Hafez remains venerated in Iran, even though he wrote of wine, romance and other topics not necessarily welcome in today's Islamic Republic. 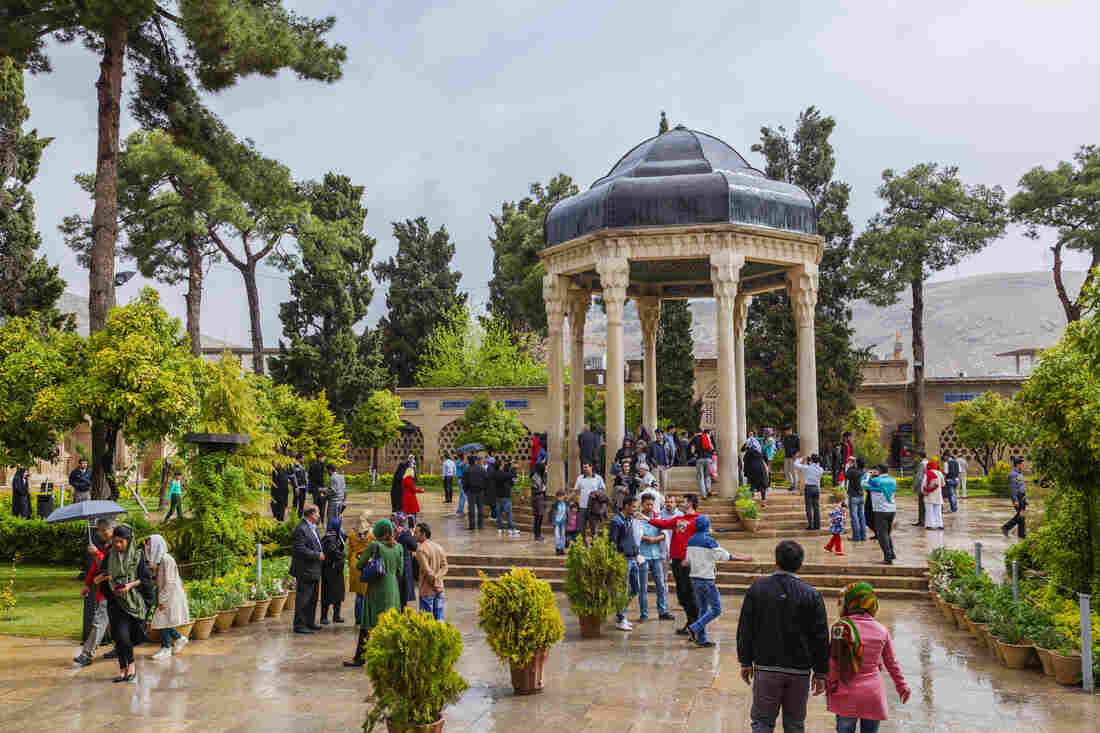 The power of the verses by 14th century Persian poet Hafez draws tourists to his tomb in Shiraz. JTB Photo/UIG via Getty Images hide caption 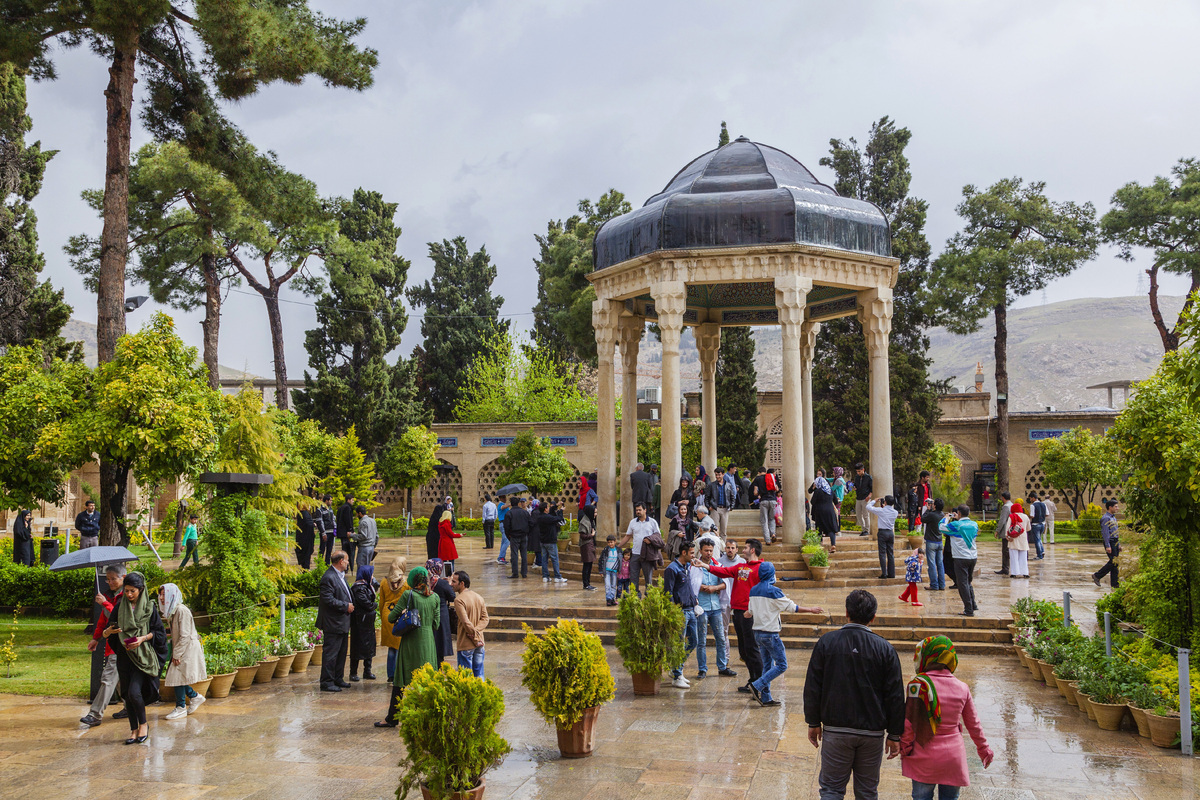 The power of the verses by 14th century Persian poet Hafez draws tourists to his tomb in Shiraz.

Just ahead of Valentine's Day, we visited the tomb of a poet who wrote often of love.

The 14th century Persian poet Hafez is buried in Shiraz, the city where he lived almost 700 years ago. He remains venerated in Iran, even though he wrote of romance and other topics that are not obviously embraced in the modern-day Islamic Republic.

One of his lines: "Oh Cup-bearer, set my glass afire with the light of wine!"

We reached the tomb of Hafez — the pen name for the man born Khwaja Shamsuddīn Muhammad Hafez e-Shirazi — at the end of the day. The setting sun still shone on the mountainsides just beyond a courtyard. The poet's tomb is at the center, beneath a roof held up by pillars.

People placed their hands on the carved stone. One was a woman wearing loose black clothes, a purple knitted cap and a Wilson-brand backpack. She kept her hands there, both of them, for what seemed like several minutes.

Afterward, we asked her what she was doing.

"It's really a thing of my heart," she said. "I think you have to connect with him to understand what happened with us, between us."

Firoozeh Mohammad-Zamani said that when her hands were on the tomb, she was having a conversation with Hafez. They talk a lot.

"I have to hear what he is telling me," she said.

And what did she hear? 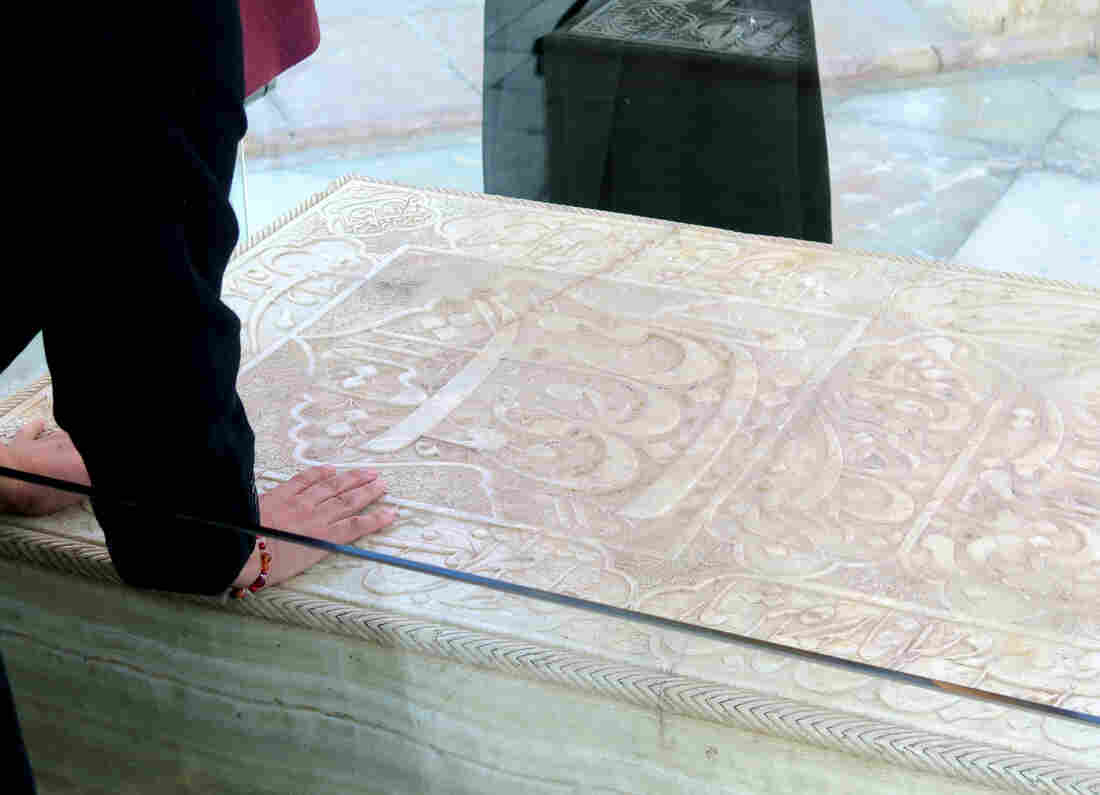 Firoozeh Mohammad-Zamani presses her hands on the stone tomb of Hafez. "Every time that I am coming here," she says, "something special happens to me." Steve Inskeep/NPR hide caption

When we first approached her, she paused a moment before answering our questions. She was waiting for Hafez to tell her if it was okay to let us into the conversation.

Fortunately for us, the poet agreed.

"Every time that I am coming here, something special happens to me," she said. "This time, it's you."

Mohammad-Zamani said she's traveled to Hafez's tomb many times from her home, hundreds of miles away. She gestured toward a poem inscribed in stone nearby.

"This one is so special for me, so deep, the deepest one," she said. "It takes care of me. The poem is coming to my head, and I can understand in this way I have to do this now."

The poet is advising her what to do in her life.

Mohammad-Zamani told us she's not a typical Iranian. She is a golfer — a former member of the national golf team — and a golf instructor.

But in taking advice from the writings of Hafez, she is utterly representative of her country. Many Iranians turn for advice to the writings of this beloved poet, opening his books at random and taking wisdom from whatever line they see.

In a second courtyard toward the back of the tomb complex, we found two friends, women in their 20s, sitting on a wall. One wore gray, the other deep red. They'd draped themselves in headscarves and loose cloaks in an Iranian style that manages to be elegant even while meeting the rules for modesty. 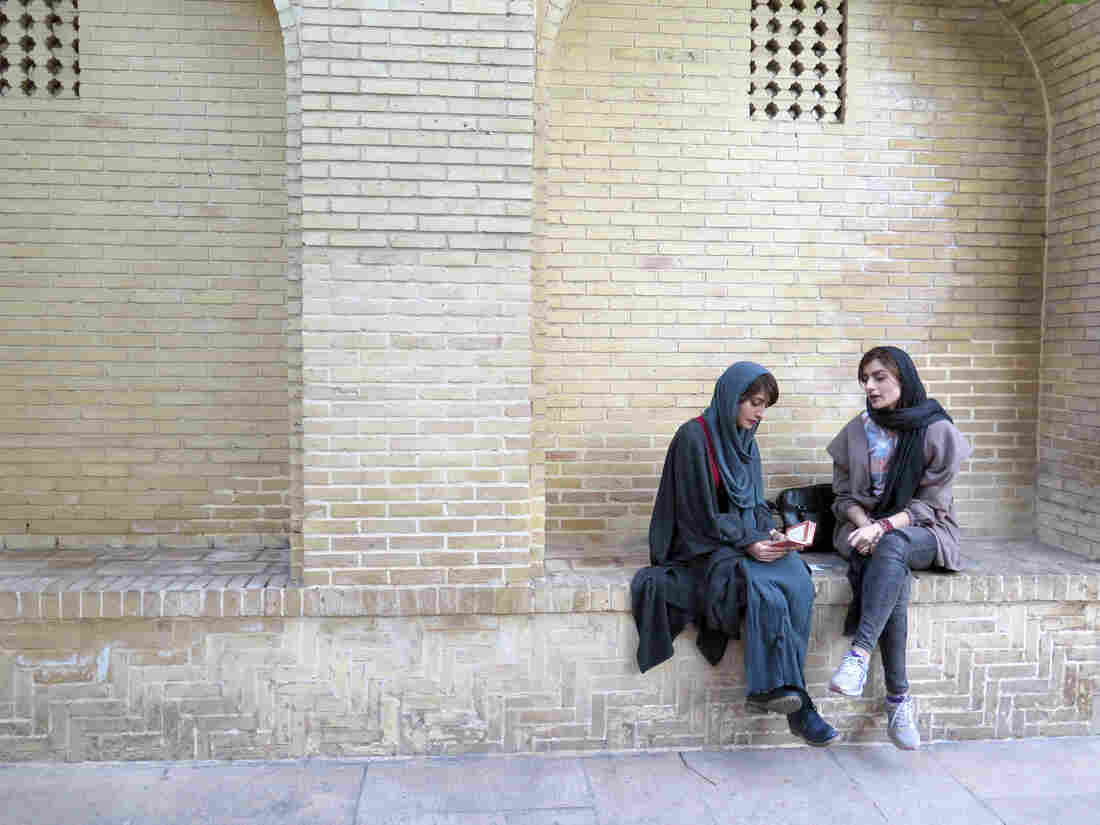 Shaghayagheh Aghazadeh, left, and Atikeh Karimi enjoy some quiet moments at the tomb of Hafez, where they seek clues to the future through the poet's words. Steve Inskeep/NPR hide caption

One of the women, Atikeh Karimi, had just opened a book of Hafez, pulling the covers apart just so, and reciting the top right-hand verse. The words brought tears to the other young woman's eyes.

Her friend had posed a question to Hafez. They didn't say exactly what the question was. That's part of the ritual; you ask in private. But they said it was a romantic query — not a surprising subject, given that Hafez once wrote:

"It seemed that love was an easy thing

But my feet have fallen on difficult ways."

In the gift shop at the tomb, shelves hold decorative volumes of poetry by Hafez. NPR producer Emily Ochsenschlager bought one for her fiance. And on the shelf, we noticed a detail that suggests the poet's immense role in Iranian life. You can buy a two-book set: One book is the writings of Hafez; the other is the Quran.

Iranian clerics have had to reconcile themselves to the poet's influence, despite his talk of love and alcohol.

"Lay not reproach at the drunkard's door," he wrote. "Where is the wine?"

No ruler of this nation could ever be entirely comfortable with the verse that reads:

"The Sultan's crown, with priceless jewels set
Encircles fear of death and constant dread
It is a head-dress much desired — and yet
[Are you sure it's] worth the danger to the head?"

If you want help telling your fortune, you can find it on your way out of the tomb of Hafez.

We met a man standing at the entrance, holding a handful of cards bearing the poet's words. On the papers stood a colorful little bird named Sarah. She is trained to pick out a paper that will answer questions about your future. 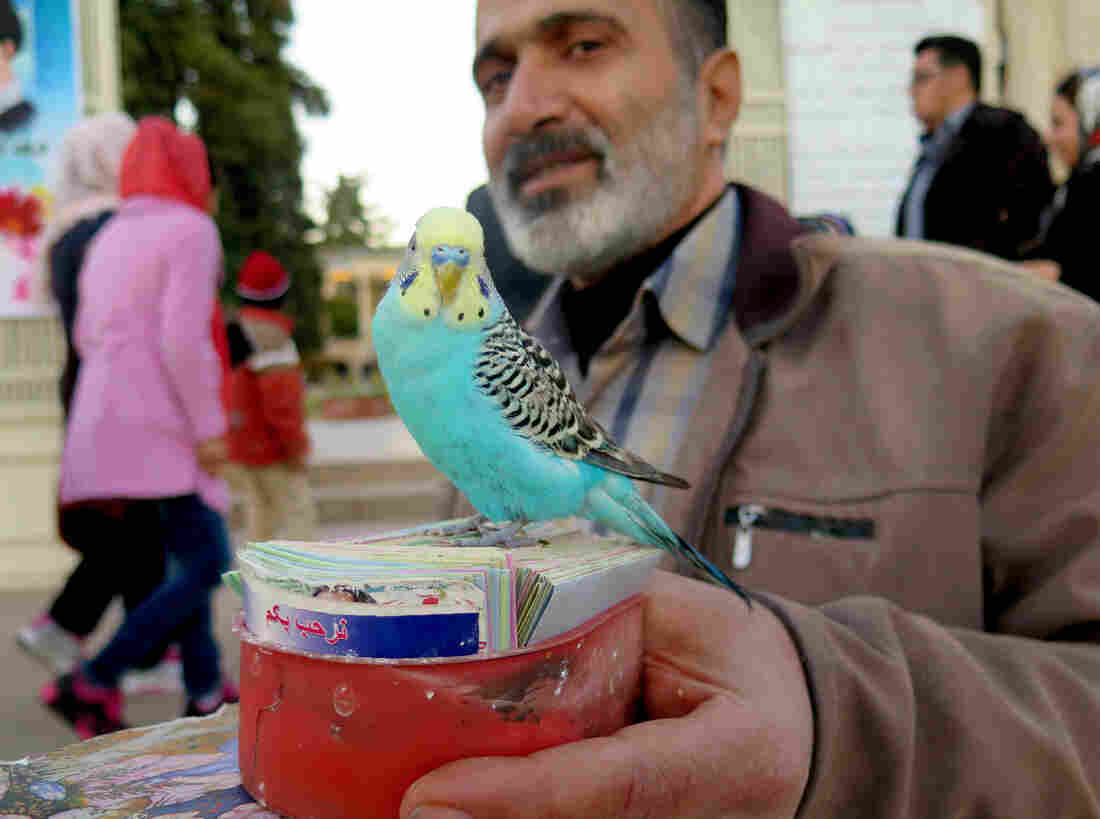 Medhi Salimian uses the words of Hafez — and the help of his bird, Sarah — to tell fortunes. Steve Inskeep/NPR hide caption 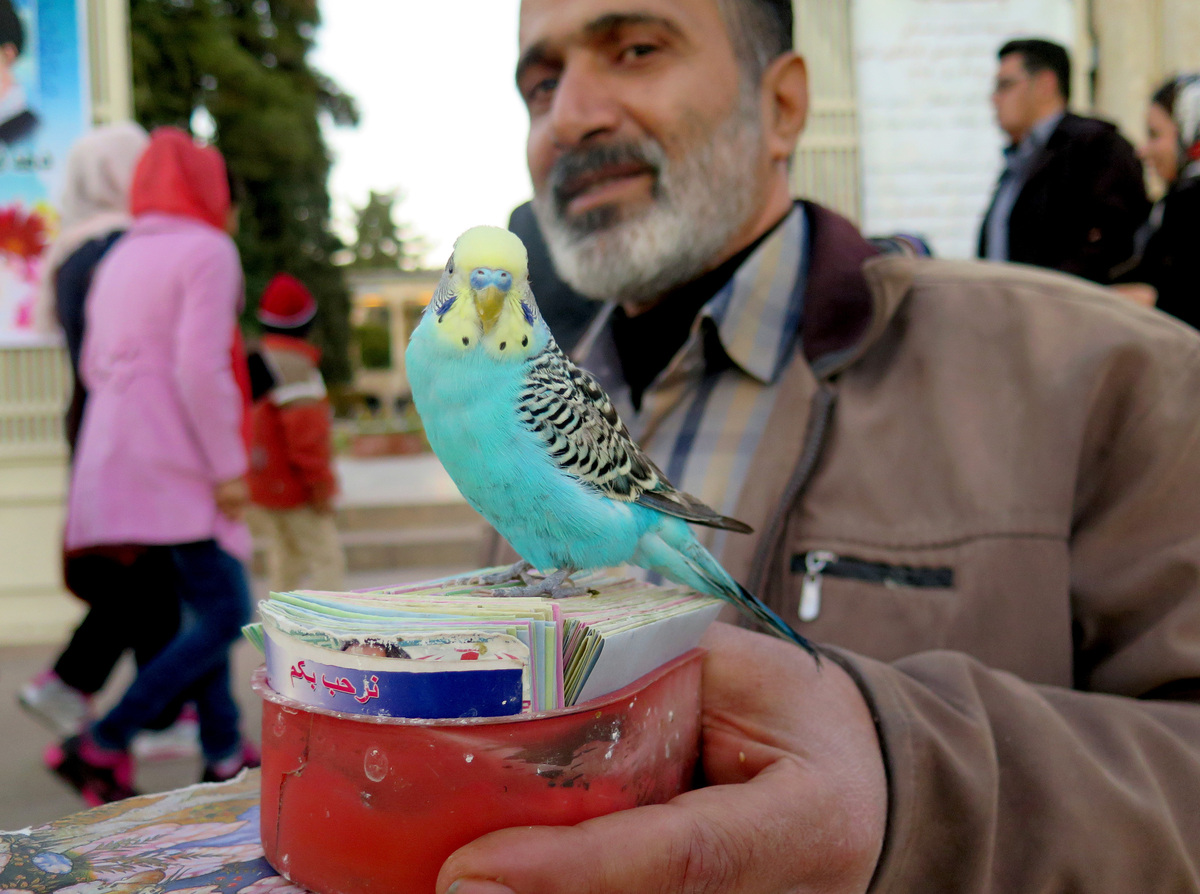 Medhi Salimian uses the words of Hafez — and the help of his bird, Sarah — to tell fortunes.

The bird pecked a paper in the box. The man eased it upward with his thumb. And suddenly the bird had the slip of paper in its beak.

I can't recall just what the paper said, nor was I really sure what it meant.

I can recall some other words from the poems of Hafez. The poet from Shiraz once wrote:

"When I am dead, open my grave and see
The cloud of smoke that rises round your feet
In my dead heart the fire still burns for thee."