Accessibility links
Protests Widen As India Debates When Speech Is Sedition : Parallels Indian security forces are cracking down on a major university, highlighting a new front in India's culture wars over things like free expression and religious dietary rules. 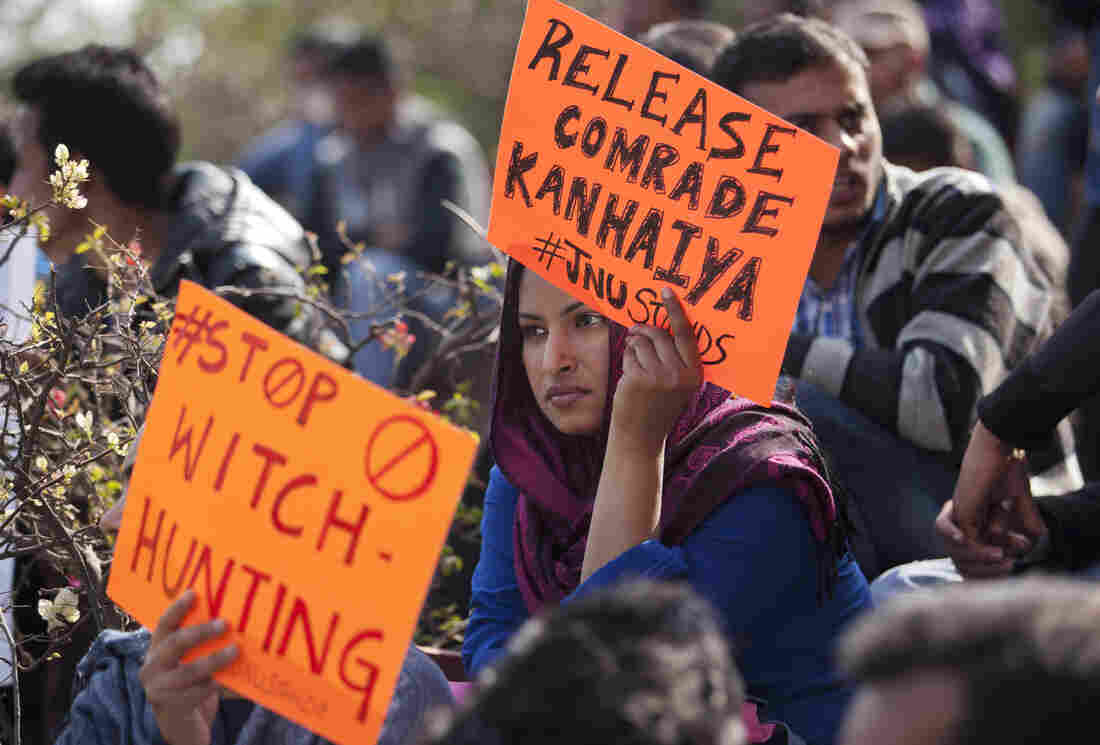 An Indian student holds a placard demanding the release of student leader Kanhaiya Kumar during a protest at the Jawaharlal Nehru University in New Delhi on Tuesday. Tsering Topgyal/AP hide caption 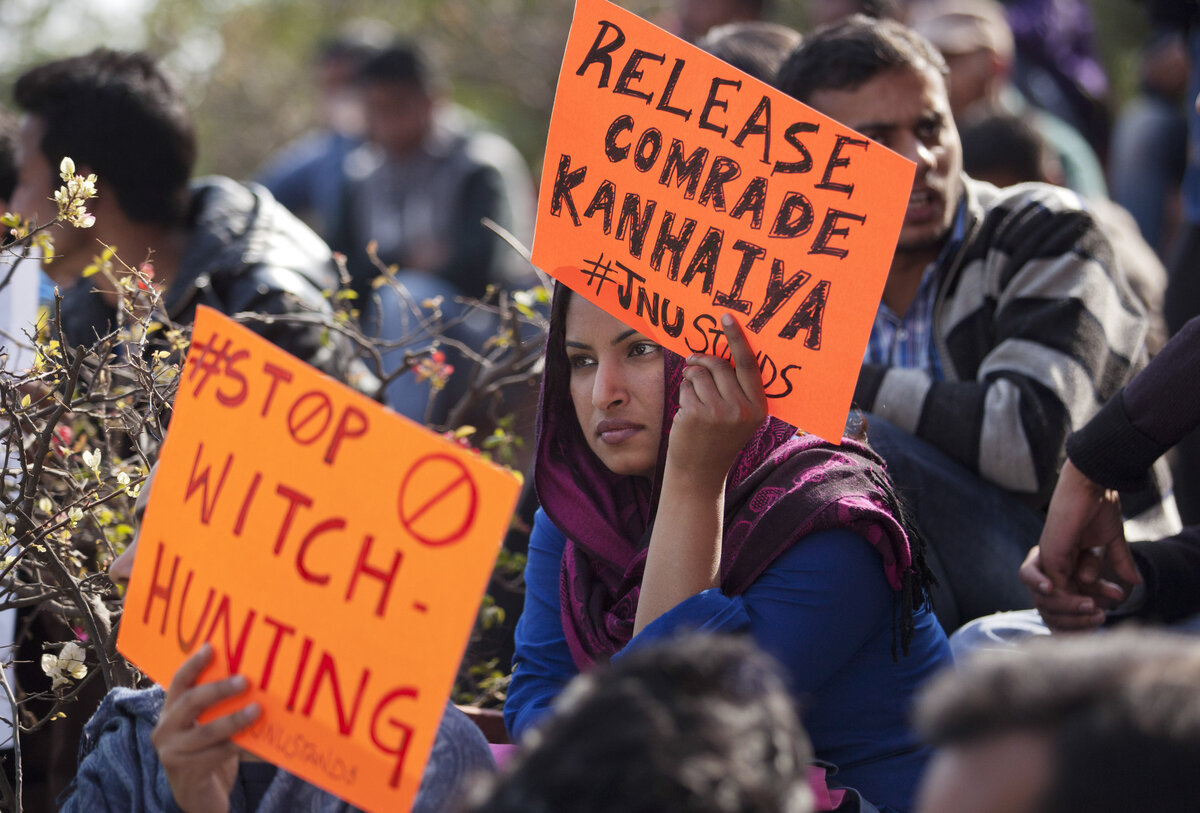 An Indian student holds a placard demanding the release of student leader Kanhaiya Kumar during a protest at the Jawaharlal Nehru University in New Delhi on Tuesday.

Students at one of India's premier universities say the government is wielding a colonial-era sedition law as a means to crush dissent. The government says it's safeguarding public security.

At New Delhi's Jawaharlal Nehru University, the arrest last week of student union president Kanhaiya Kumar on sedition charges has paralyzed the school and aroused a heated national debate about the state of free speech under Prime Minister Narendra Modi.

University students have been holding marathon rallies on campus, which has been locked down since police raided it, looking for students who might have fallen afoul of India's little-used sedition law.

The clash pits ultra-conservative forces of Narendra Modi against the university with detractors calling the tax-payer funded school "a nest of anti-national activity."

Tensions erupted at the university after students organized an event last week to protest the hanging in 2013 of Afzal Guru, a Kashmiri separatist convicted of a 2001 terrorist attack on India's Parliament.

Some at the gathering shouted anti-India slogans that condemned Guru's execution. "Afzal, your death will bring revolution," one slogan said. "India should shatter into pieces," said another.

A rival student group aligned with Modi's ruling party complained to police that there was "anti-national" activity on campus.

Police are combing videos of the event to determine who all may have engaged in such sloganeering. They are pursuing activists affiliated with the Democratic Students Union (DSU), described as ultra-left leaning. Kumar, the one student known to be arrested, is due in court Wednesday. He reportedly told police he criticized Modi but did not utter anti-India statements.

JNU is sometimes likened to the University of California, Berkeley, with left-wing traditions and distinguished ranks of graduates including prominent politicians, journalists and artists.

Prahash Karat, the former general secretary of the Communist Party and former student union president, addressed students this week, declaring, "JNU is a prime target for this [Modi] regime."

"There is a plan," Karat said, "to impose their political and ideological hegemony over all these [academic] institutions."

Since Modi's rise to power, some of his most devoted followers have pursued a hard-line agenda: They have incited against those who eat cow meat, demanded the revision of history books and tried to restrict the way Indians consume entertainment.

Like-minded demonstrators gathered this week outside the university gate, fortified by police, to oppose the JNU students. Shouting approval of the Modi government crackdown, they chanted, "JNU traitors should be hanged."

Nalin Kohli, a spokesman for Modi's ruling party, says the student protest against Afzal Guru's hanging should not be protected as free speech.

"This was about recognizing a terrorist as a martyr, rejecting due process of law and calling those who had given the judgment as murderers, murder by the Supreme Court. And therefore it becomes far more serious, and obviously an investigation is bound to happen," Kohli said.

But Supreme Court lawyer Sanjay Hegde doubts that sedition can be proven — because, he says, it requires speech to cross the line into action.

"The law says unless there is an actual incitement to violence, there is no sedition," Hegde said in a Times Now television broadcast.

Om Prasad, who is pursuing a doctorate in history at the university, notes that Mohandas Gandhi was tried by the British under the same sedition law now being invoked against student leader Kumar.

He says a warning by India's home minister that anyone making anti-India slogans will "not be spared" has sent a chill through the campus.

"I think it is more a case of actually criminalizing dissent," he says. "It's a larger witch hunt for people who don't agree with the agenda of the government."