Accessibility links
Anti-Trump Voices Grow Louder In Scotland After Development Rift : Parallels Donald Trump promised to bring thousands of jobs and tourism to Aberdeen. A decade later, he has angered the neighbors of his luxury golf course. "He promises the earth, delivers nothing," says one. 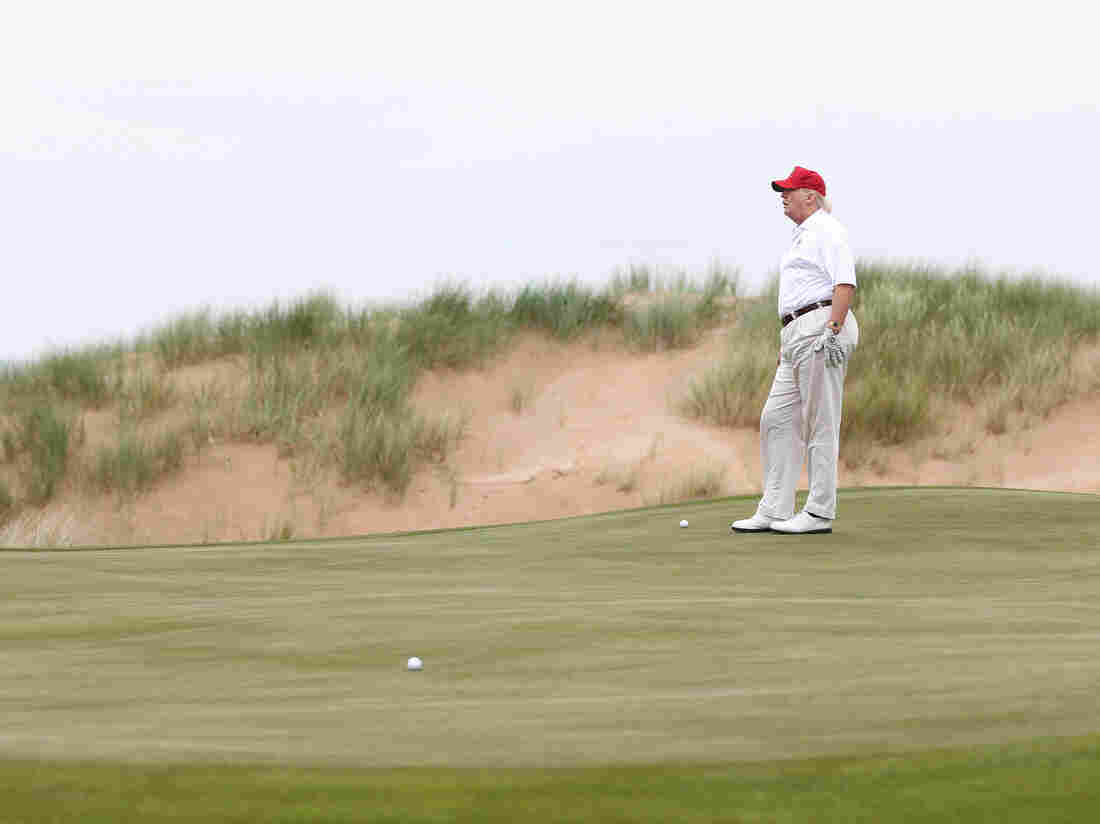 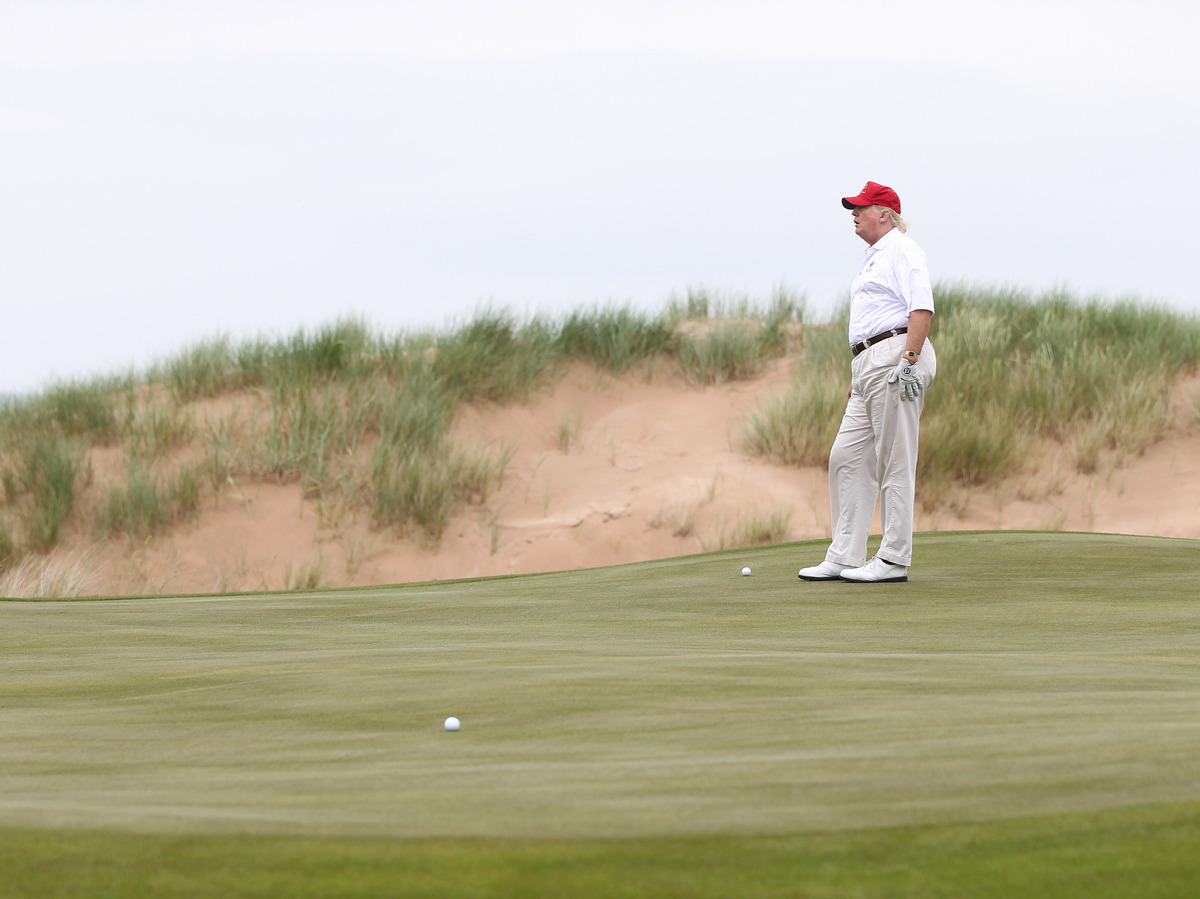 Donald Trump played a round of golf after his Trump International Golf Links Course opened in July 2012 in Balmedie, Scotland, near Aberdeen.

In northeast Scotland, there is a cluster of homes on the outskirts of a pristine golf course near Aberdeen owned by none other than Donald Trump. The U.S. presidential hopeful's business venture promised thousands of jobs, tourism and a new way to diversify the oil economy.

Trump wanted to build the golf course in Scotland, he said, because his mother was born there. But almost a decade later, he has angered his neighbors and turned some of his former supporters against him.

"He promises the earth, delivers nothing," says David Milne, who lives nearby. "As far as that goes, he's in a good position to be a politician. But as far as the real world goes, no, do not trust this man with anything."

Milne used to have an ocean view; now he has to stand on his upstairs balcony to see over the edge of Trump's golf course.

"You've got the Donald Trump clubhouse maybe 700 yards away at a push, maybe slightly less," he says.

The landscape might be a sprawl of green, but Milne says he rarely sees a golfer. He was never a fan of the golf course, which spreads across parts of 4,000-year-old coastal sand dunes designated as a special environmental site. 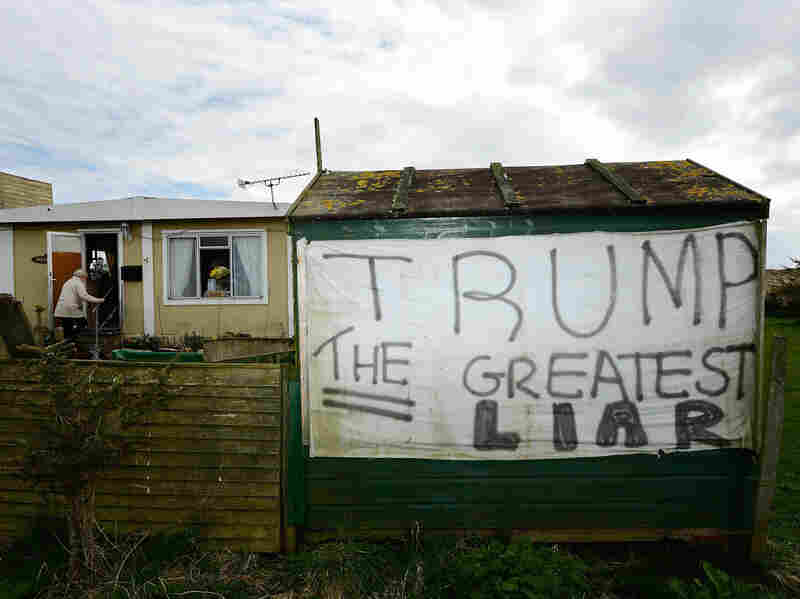 Local anger at Trump simmered while his golf course was under construction in April 2012. Jeff J Mitchell/Getty Images hide caption 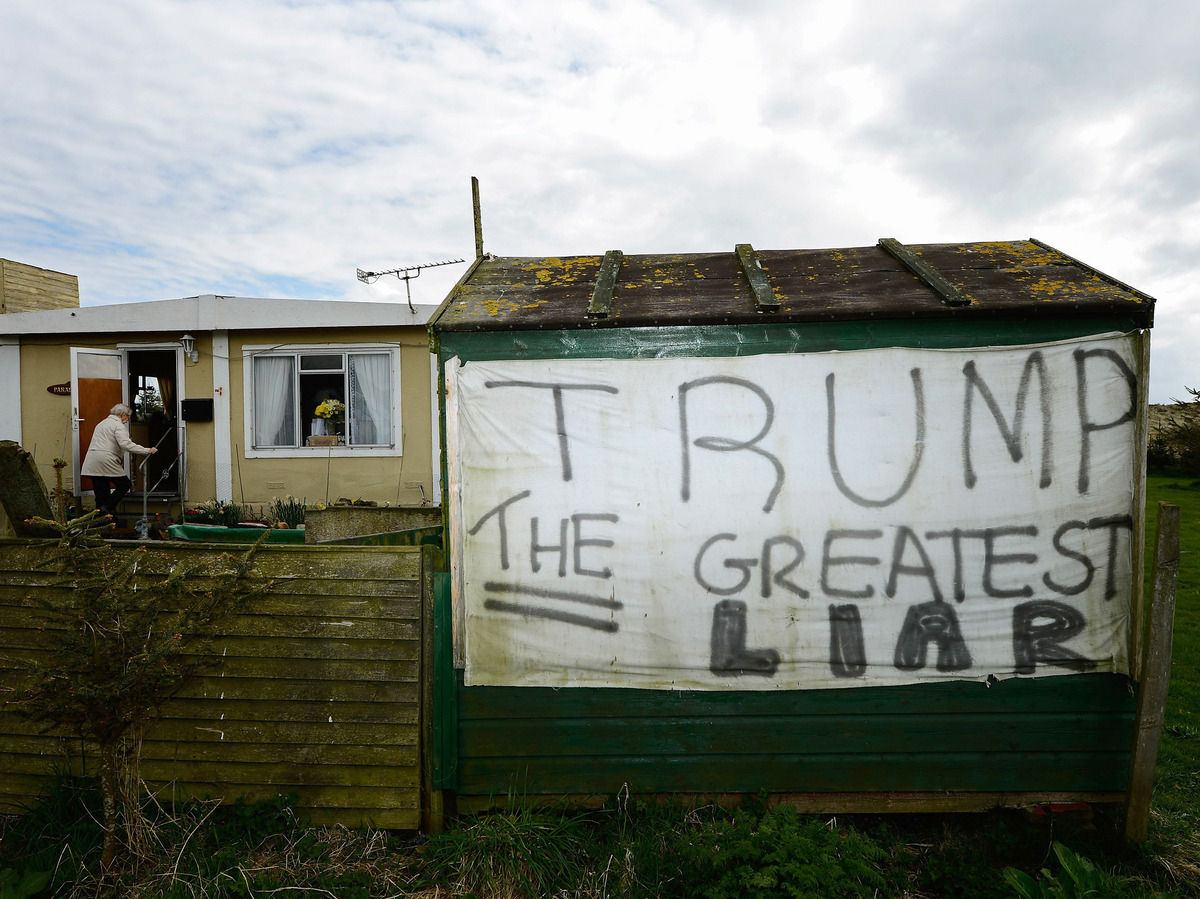 Local anger at Trump simmered while his golf course was under construction in April 2012.

But that's not why he dislikes Trump. It's because he's a bully, Milne says — and a really bad neighbor.

Milne says Trump tried to use the Scottish version of eminent domain to force locals to sell their property. And Trump has publicly insulted his neighbors, calling their homes ugly.

"I would categorically dispute any claims that we have purposely made life difficult for the neighbors or done things that were wrong," she says. "We simply haven't."

Before Trump showed up in this sleepy area, people say they left their doors unlocked. Now they have video cameras to catch incidents of alleged harassment by Trump's staff.

One of Trump's biggest fans used to be the leader of the Scottish National Party, Alex Salmond. He was head of the government in Scotland when Trump came in with his grand plans.

"Donald said wonderful things about the billions of dollars he was going to invest, the thousands of jobs that were going to be created," Salmond recalls. "Now, eight years later, I reckon the investment has amounted to perhaps a tenth of that."

Salmond says Trump disrupted Scotland's plan to develop sustainable energy.
Trump said building wind turbines in the sea off the coast of his golf course would ruin the view. He sued to stop them, and the plan was delayed in the courts for years and Britain's Supreme Court finally rejected his challenge in December. It set off a public feud between Salmond and Trump.

"I think our relationship deteriorated because I said no to him," Salmond says. "And I think my opinion of Donald Trump is, I wish somebody had said no to him when he was a wee boy, because I think he would've turned out better."

"Judge us from what we've done," she says. "I would defy anyone to come here and not say, 'I may not like the man, but he delivers' — and he has delivered."

Trump, she says, has invested nearly $150 million in the course so far. There are plans to build a second golf course, a residential village, banqueting facilities and more.

But the anti-Trump voices are getting louder. And a petition to ban him from Britain after he made anti-Muslim remarks originated right here in Aberdeen.