Accessibility links
As A Japanese Mountain Village Shrinks, So Do Its Prospects For Kabuki : Parallels For more than 300 years, children have performed kabuki, Japan's classical theater, in the village of Damine. But as residents age or leave for cities, Damine is running out of young performers. 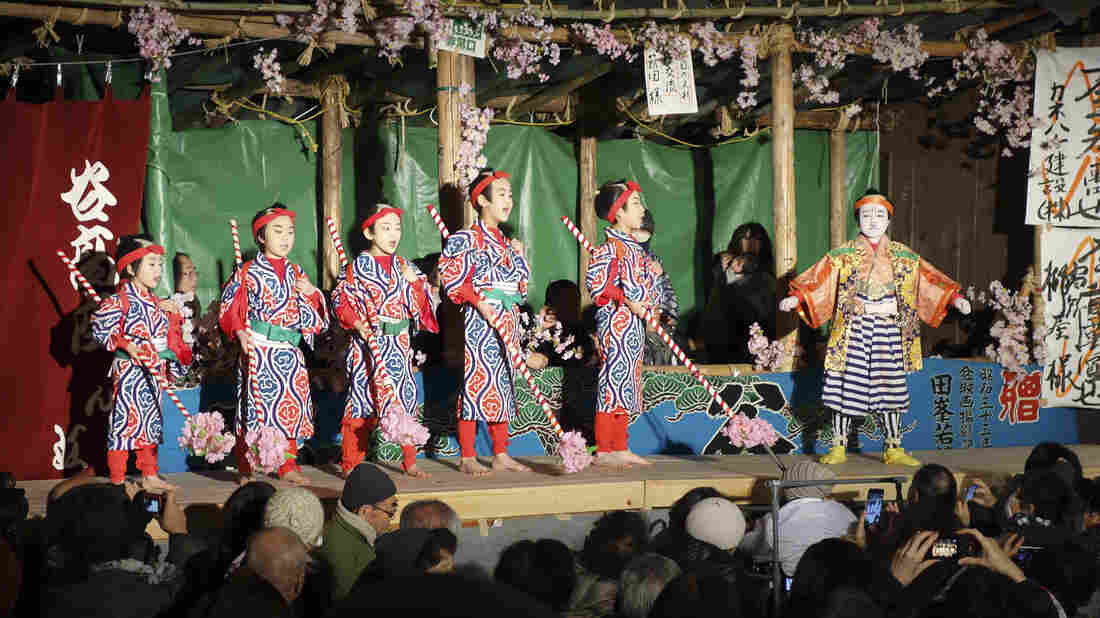 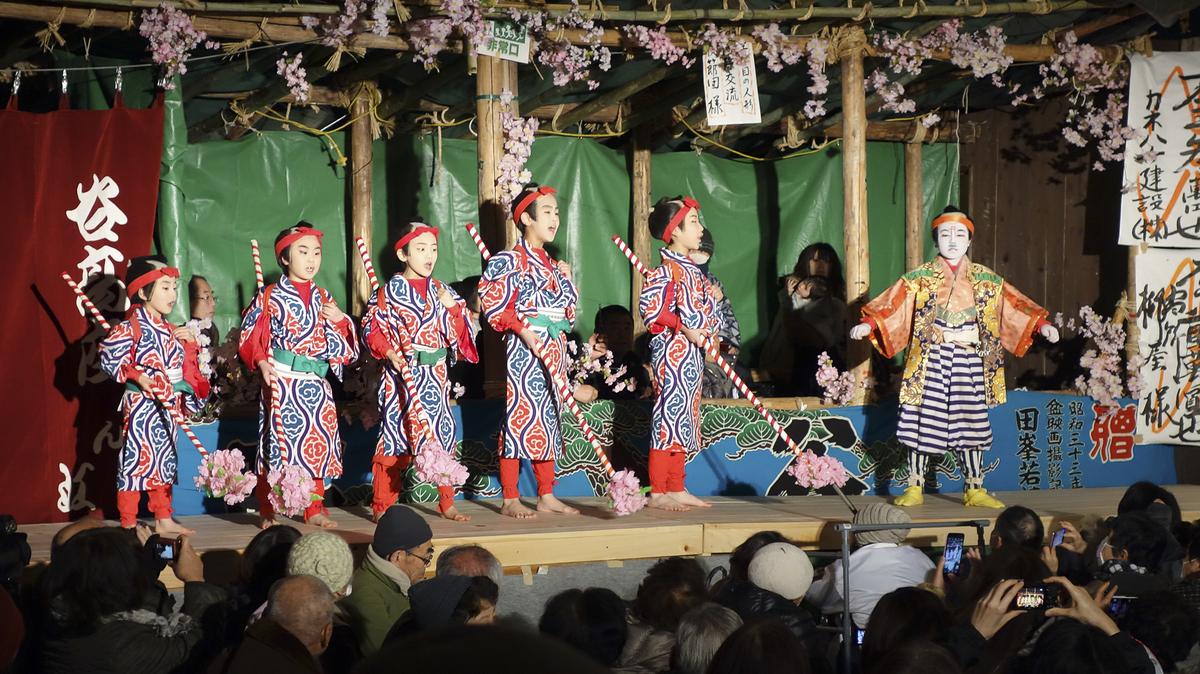 Six of Damine's 10 remaining children perform in the finale of the village's annual kabuki festival.

In the central Japanese mountain village of Damine, children have kept up an unbroken tradition of performing Japan's classical theater, kabuki, year after year for more than three centuries. But as people age or leave for opportunities in cities, the village is running out of performers.

The annual kabuki festival in Damine features a daylong program in February that always closes with a finale starring the village's children. Locals begin the day with prayers at a centuries-old temple atop a mountain. Just outside the temple, a temporary theater and stage are constructed with bamboo and tarp for the big performance.

The covered makeshift theater can seat about 250. That's also the population of the village. Japan's overall population has been dropping steadily in recent years. More than 26 percent of the population is older than 65, while the country's birthrate has remained low.

Each year, Damine's actors perform for a live audience and, more importantly, to the Guanyin, a Buddhist goddess of mercy.

"Legend has it that hundreds of years ago, the mountain village was jeopardized when someone accidentally chopped down one of the shogun's trees," says Hina Takeshita, the 12-year-old star of the closing kabuki play.

As news spread that the shogun, a feudal commander, was coming to investigate, the villagers prayed to the gods. They promised to perform kabuki every year if the goddess of mercy could make it snow. A rare June blizzard arrived, thwarting the visit by the shogun's samurai and saving the village from punishment.

"So we've been playing kabuki ever since then," Hina says.

She needed only a month to learn her part because she has performed kabuki every year since she was 6.

Kabuki, a highly stylized ancient art, is performed in classical Japanese. The body movements are specific and difficult for first-timers. Children like Hina are key to this village's tradition, because they've practiced kabuki most of their lives. They perform in the show for all the years they are in elementary school. They learned it from their parents, who also performed as children.

But now, the village has only 10 children left between the ages of 6 and 12. 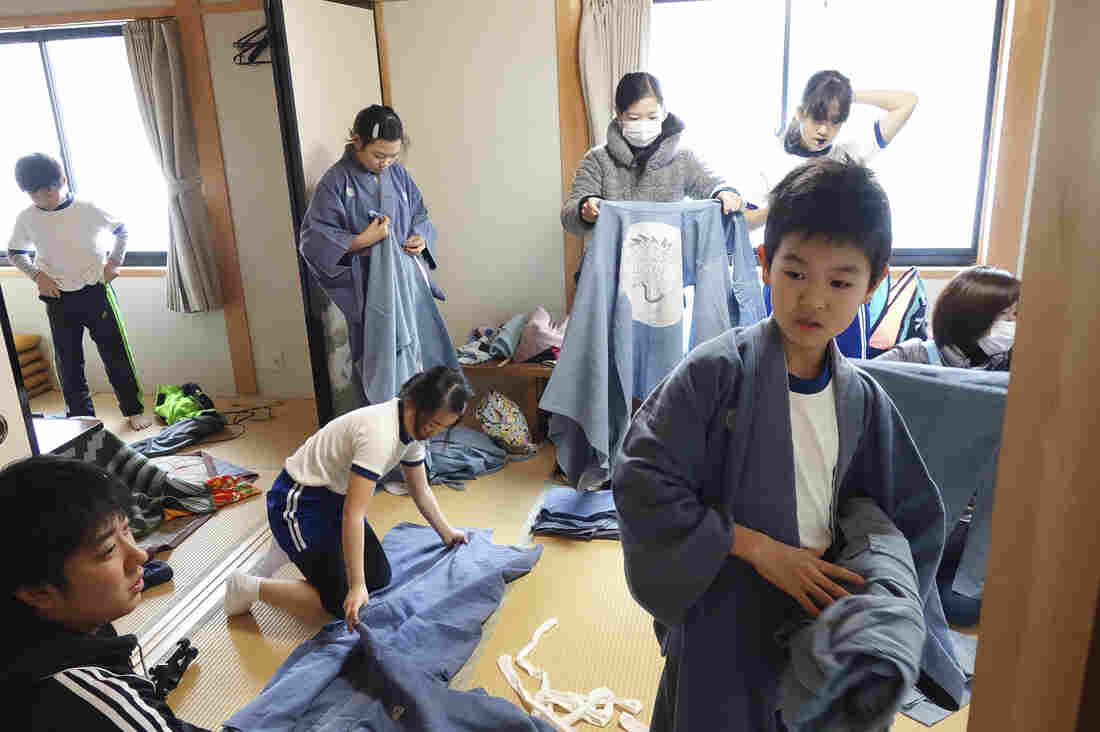 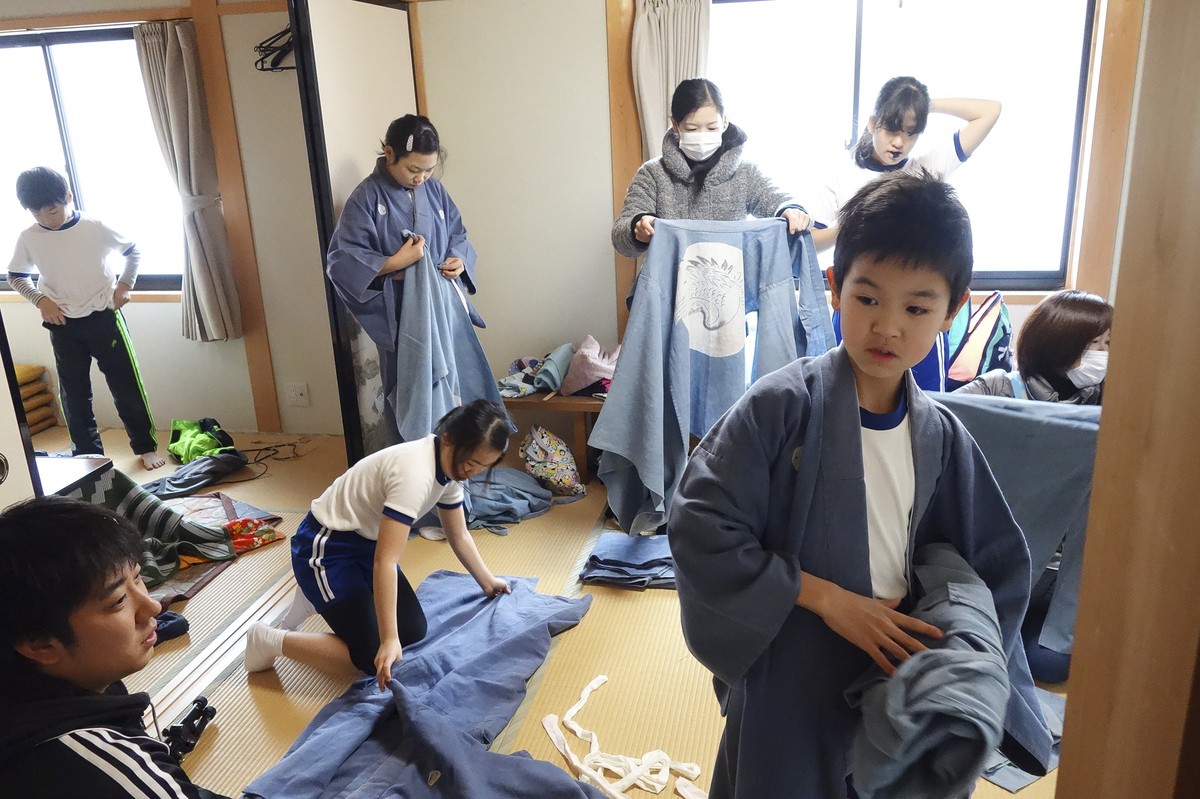 Village children prepare for their performance in their dressing room.

"As someone who lives in this village, it's definitely not a happy thing for me," says Mitsuaki Yokoyama, the mayor of Shitara, the small township that oversees Damine.

The mountain temple overlooks Damine Elementary School. The kabuki tradition is so important that town leaders keep the school open mainly so Damine's 10 kids can continue their kabuki training. Mayor Yokoyama is now in his sixties, and he remembers just a few decades ago when the elementary school's student body was closer to a hundred.

Today, the combined first- and second-grade classroom has only four desks. This is typical of Japan's mountain towns. Families have been deserting them for decades.

"There's a phenomenon called kaso (過疎), in which young people started leaving the town to the city, to find work. That phenomenon began about 50 years ago, and it continues to today," Yokoyama says. 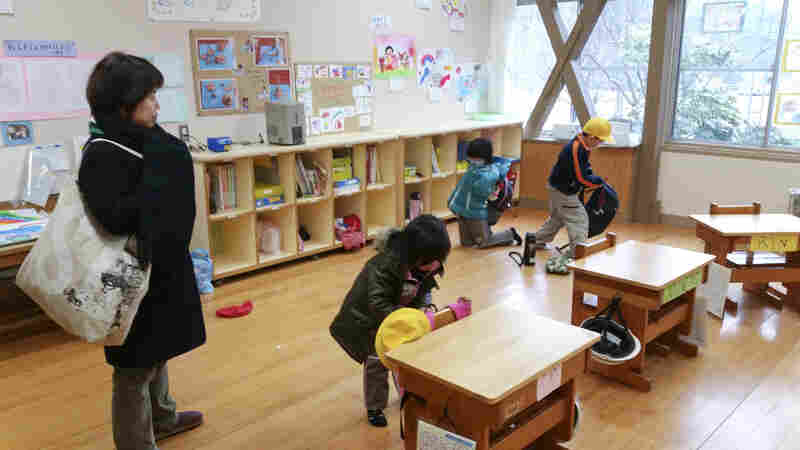 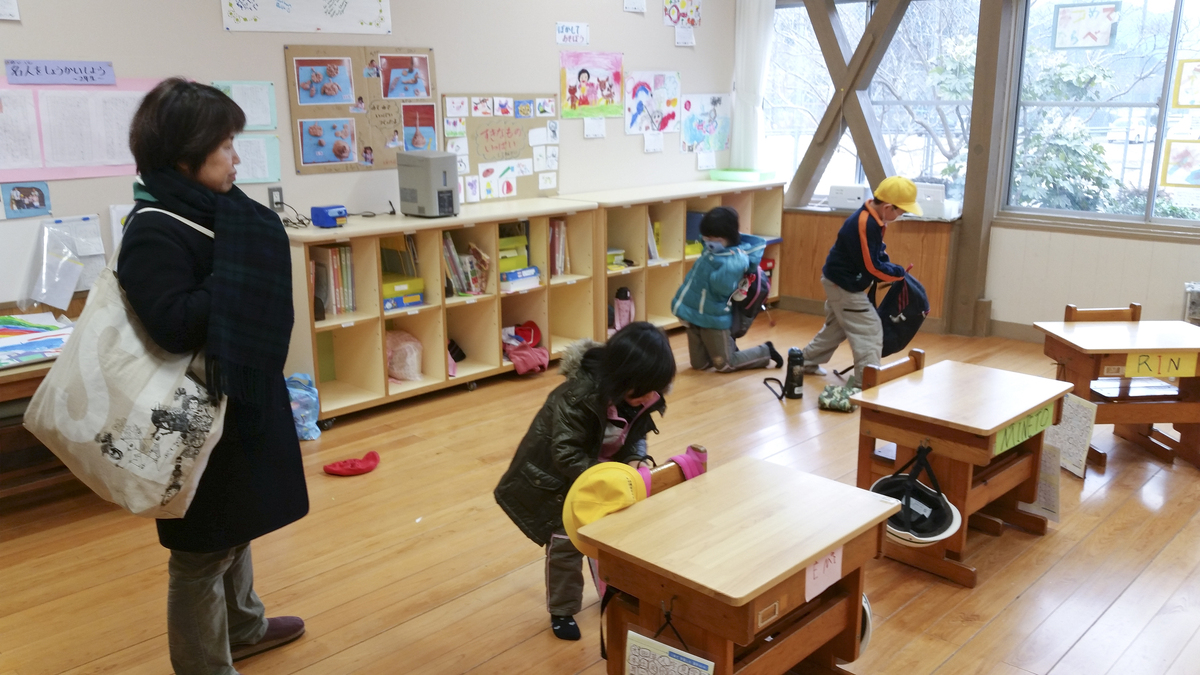 To try to reverse the trend, local governments have come up with incentives to lure Japanese back to the mountains. One program in Shitara offers young families not only dirt-cheap land, but also up to $45,000 toward appliances and furniture for their homes.

If these incentives don't work, it's unclear how long the kabuki performances will continue, or whether the village will still be around in a few decades. Young performer Hina says the promise to the goddess is they will perform until only three families are left.

Backstage, the children are minutes away from their festival-closing finale. Eight-year-old Yukai Senbo is caked in white makeup and heavy eyeliner, wearing colorful, multilayer robes of a traditional kabuki costume and a weighty wig on his head.

I ask him if he's nervous.

Two elderly Japanese musicians provide the live score and narration. They've been playing traditional Japanese instruments for 70 years. Then the little ones take the stage, hitting their marks. After a difficult pose or a funny sequence, the crowd shows its approval with applause and by tossing paper-wrapped coins onto the stage.

Watching the children contort their bodies in specific poses, reciting lines far beyond their years, you can see why the villagers hope this goes on forever. Mayor Yokoyama is in the audience, watching proudly.

I remind him the gods saved this village hundreds of years ago — from samurai. But from depopulation?

"Only the gods know that for sure," Yokoyama says.

If there's one place where they keep the faith, it's here.

Akane Saiki and Ben Dooley contributed to this story. For a behind-the-scenes look at our reporting from Japan, check out Elise Goes East.