Accessibility links
Finding A Long-Lost Father As Spain Exhumes Decades-Old Mass Graves : Parallels Ascension Mendieta watched a gunman march her father away 77 years ago. Now she finally knows where he was buried. Spain has 2,300 mass graves. As they're exhumed, the country confronts a bloody past. 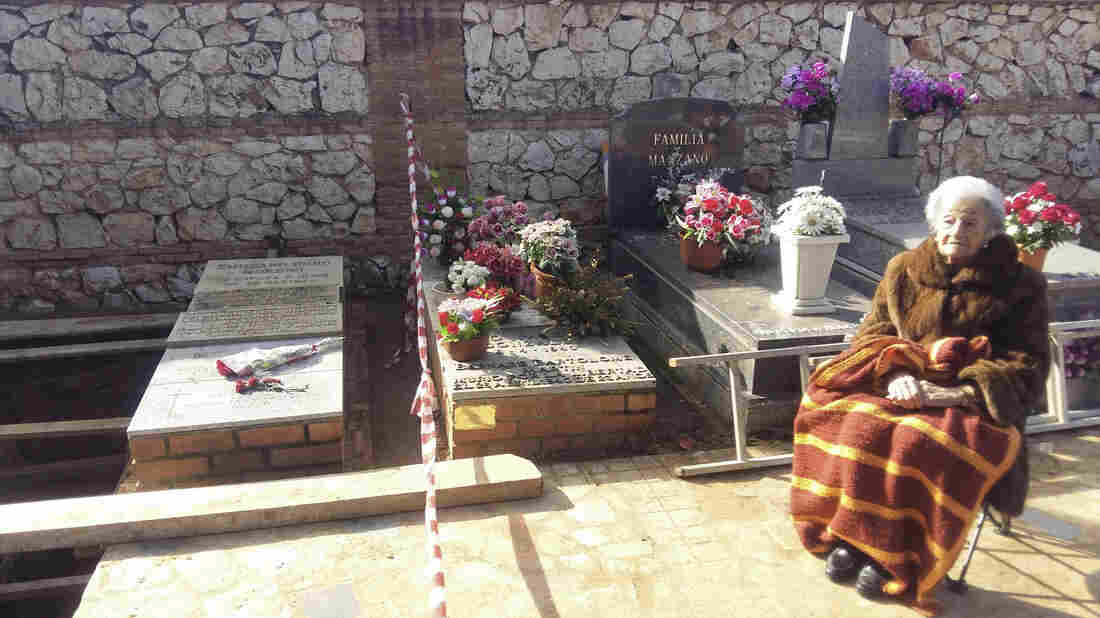 Ascensión Mendieta, 90, visits the mass grave where her father, Timoteo Mendieta, was buried in 1939. She saw him for the last time when she was 13. Two years ago, she became the plaintiff in a case to allow Spain's mass graves to be exhumed. Lauren Frayer for NPR hide caption 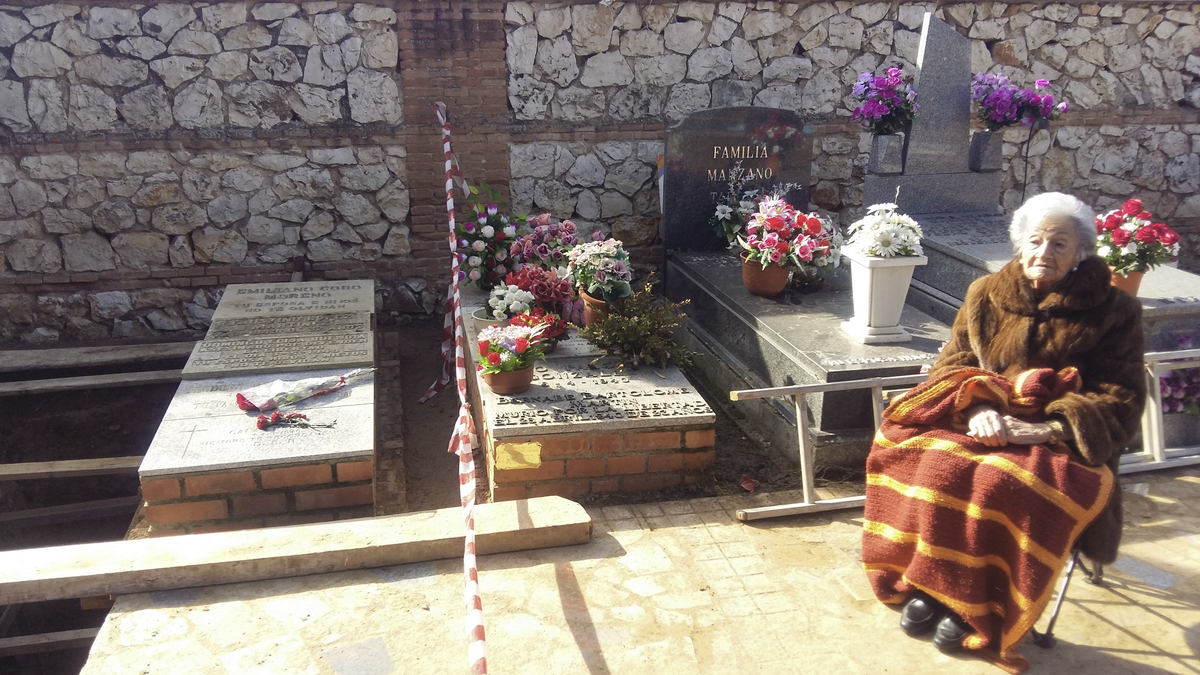 Ascensión Mendieta, 90, visits the mass grave where her father, Timoteo Mendieta, was buried in 1939. She saw him for the last time when she was 13. Two years ago, she became the plaintiff in a case to allow Spain's mass graves to be exhumed.

Mendieta is 90 now. She was 13 when she last saw him. He was marched away from their home in the middle of the night, with a stranger holding a pistol to his head. The year was 1939.

Spain's three-year Civil War, pitting Nazi-backed Fascists against Communist-backed Republicans, had just ended. Half a million Spaniards had been killed. But the violence didn't stop. Fascist forces loyal to General Francisco Franco, the victor, continued to execute opponents for months and even years after the war officially ended.

The victims included Timoteo Mendieta, the president of a local trade union in Sacedón, a village in the province of Guadalajara, east of Madrid.

Cemetery records show Mendieta was shot dead and his body dumped in a pit outside the consecrated area of Guadalajara's Catholic cemetery in November 1939. His family was never told precisely where.

His daughter is the plaintiff in a landmark court case that has finally led her to her father. The pit into which his body was thrown is one of some 2,300 mass graves — defined by the United Nations as burial sites containing three or more victims of execution — across Spain.

Now these graves are being excavated for the first time. Archaeologists have identified Timoteo Mendieta's remains as No. 21 of at least 22 skeletons in the grave, based on personal effects and his placement.

"We never forgot about him. My mother made a gravestone, even though we didn't know exactly where he was buried," says Mendieta, a dainty, handsome woman wrapped in a fur coat against the bitter cold. "We used to toss flowers in that direction, over the wall."

She gestures toward a stone wall on the edge of Guadalajara's cemetery, still pockmarked with bullet holes. It's where Franco's prisoners were lined up and shot by a firing squad.

After Franco died, Spain passed an amnesty law prohibiting investigations of political crimes from his era. So courts in other countries have taken up cases. Two years ago, at age 88, Mendieta flew to Argentina to testify before a judge. The Argentine court ordered her father's grave exhumed, and for the first time, a Spanish judge allowed it.

Only Cambodia has more mass graves than Spain, according to Amnesty International. The group estimates that some 20,000 Republicans like Timoteo Mendieta were killed after the Civil War ended. 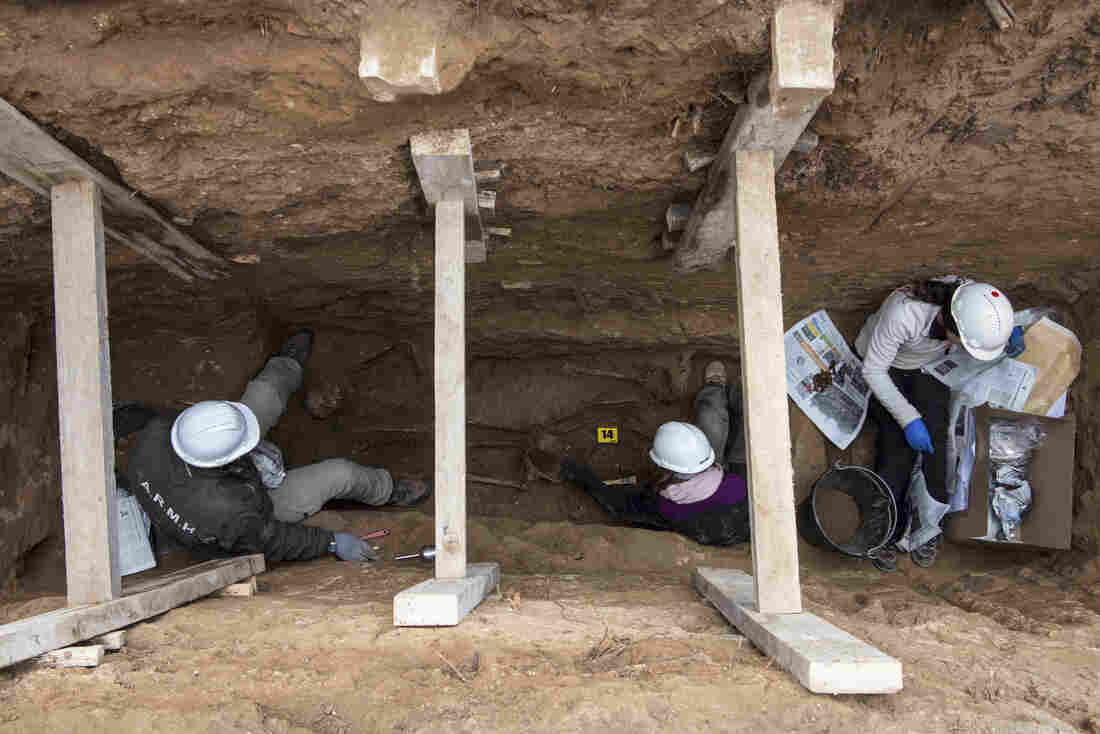 An image provided by Association for the Recuperation of Historical Memory shows the exhumation of a nearly 80-year-old mass grave on the edge of a cemetery in Guadalajara, Spain. This section of the mass grave is believed to hold the bodies of at least 22 people, all executed by Fascist forces in November 1939. Ascension Mendieta's father was among them. Courtesy of ARHM hide caption

They were buried unusually deep because bodies were dumped in layers.

"It's really rare to see graves at this depth — over 3.5 meters [11.5 feet]," says Natalie Maystorovich Chulio, a socio-legal scholar who works with Spain's Association for the Recuperation of Historical Memory, which is excavating the grave that includes Mendieta's remains.

The Fascists "must have known they would be killing so many people," she says. "So what they would do is put a little bit of terrain or dirt over one layer of dead bodies, and then dump more victims in, and then the next lot and the next lot."

As Chulio climbs a ladder down into the tomb, I crouch on the edge and lower my microphone underground as she explains her work — scraping delicately at skeletons.

"Using paintbrushes and dentist tools, we basically remove the dirt around the bones," she says. "At the moment, I'm removing the femur and wrapping it in paper."

Chulio lifts the leg bone of a skeleton, still wearing leather boots. DNA testing comes next. All the forensic details are then compared with historical records from the Franco era.

"The dictatorship really did our work for us, in a way," says Spanish historian Alejandro Rodriguez, who is supervising the exhumations. "The dictatorship held sham trials and kept meticulous records of the people it killed."

He pages through a Guadalajara cemetery logbook that lists dozens of people in their 20s and 30s, all buried on the same day as Timoteo Mendieta. These logs were never shared with families. 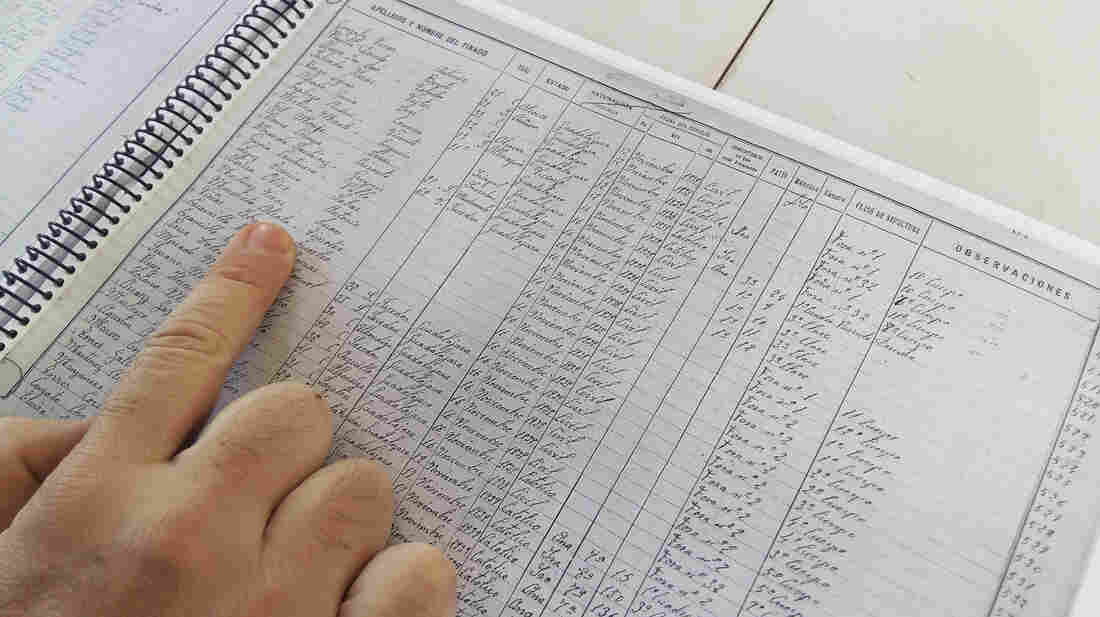 Alejandro Rodriguez, a Spanish historian, points to one entry in a Guadalajara cemetery logbook from the year 1939. It lists the burial of Timoteo Mendieta, a local trade union leader, who was executed and his body dumped in a mass grave. The dictatorship of Gen. Francisco Franco "kept meticulous records of the people it killed," he says. Lauren Frayer for NPR hide caption

Rodriguez says that before they were killed, victims including Mendieta were ordered at gunpoint to confess to crimes against Franco. Those who admitted wrongdoing were still executed — but they were buried on the consecrated, Catholic side of the cemetery. Most, like Mendieta, refused — and were dumped in the mass grave nearby.

There were atrocities on both sides of Spain's Civil War. But after the Fascists won, their fighters were given proper reburials and memorials. The same wasn't true for their foes. During Franco's nearly four-decade dictatorship, many Spaniards never learned about his forces' mass killings.

So the exhumation of the Mendieta grave, which began in late January on the edge of Guadalajara's cemetery, has drawn a crowd, including local teenagers.

Sergio Lopez, 17, came "to learn more about what happened. In school they don't teach you about this [history]," he says. "It's a bit hidden."

Unlike Germany, which requires schools to teach about its war atrocities to prevent them from ever being forgotten, Spain abides by a so-called "Pact of Forgetting" — a tacit agreement not to talk about the past, formalized by various laws. The Spanish Civil War is something many families still don't like to discuss. But as these graves are exhumed, this country may be forced to confront its bloody past.

"I never thought this moment would come," says Mendieta. "I'm happy to finally find my father. I would like him to be buried with me, when I die."