Accessibility links
A Young Afghan Migrant Makes His Way In The Calais 'Jungle' : Parallels Many asylum-seekers in Europe are unaccompanied minors, traveling alone or separated from families. Amran, a 13-year-old Afghan, is among hundreds of minors left to fend for themselves in France. 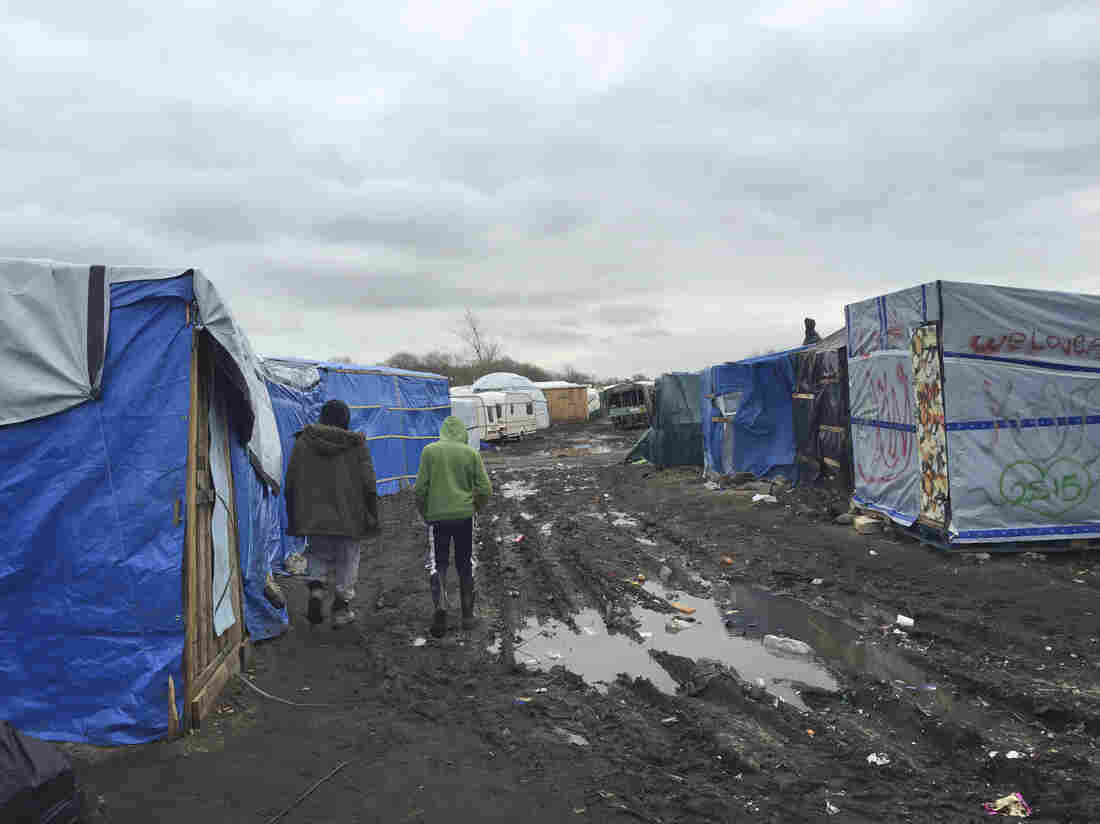 Amran, an unaccompanied minor from Afghanistan, at right, walks in the camp known as the Jungle with 35-year-old Farid Hamdan, a father of four, also from Afghanistan. "My heart is saying help him because he's only a kid," says Hamdan. "He has nobody else here to look after him." There are 300 to 400 children staying in the Jungle. Eleanor Beardsley/NPR hide caption 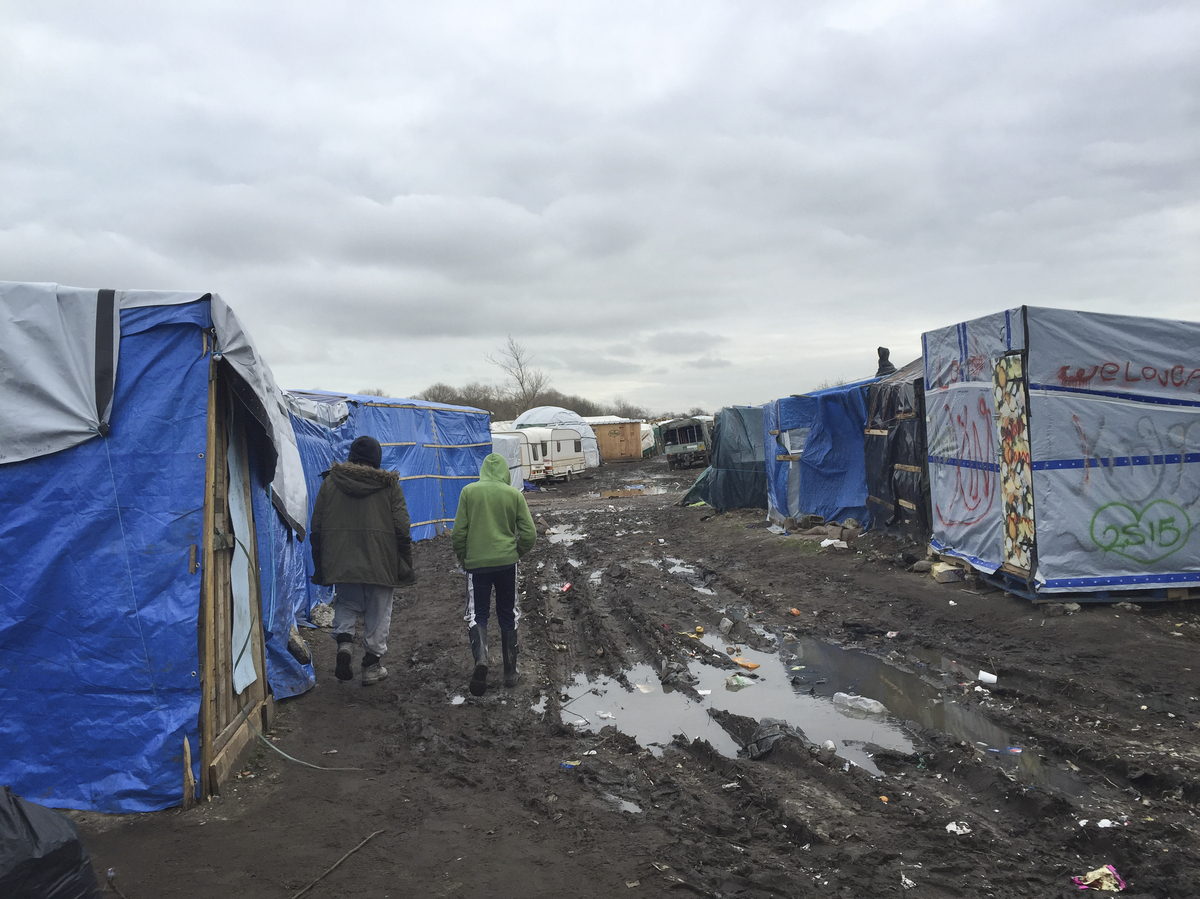 Amran, an unaccompanied minor from Afghanistan, at right, walks in the camp known as the Jungle with 35-year-old Farid Hamdan, a father of four, also from Afghanistan. "My heart is saying help him because he's only a kid," says Hamdan. "He has nobody else here to look after him." There are 300 to 400 children staying in the Jungle.

As soon as I walk into the squalid, unofficial migrant camp known as "the Jungle," outside the northern French city of Calais, I meet Amran, a 13-year-old Afghan boy staying here on his own.

In a high-pitched child's voice — it hasn't yet changed — Amran tells me his story. His father is dead and his mother wanted him to leave Afghanistan for his own safety. It took him eight months to reach this port city and the Jungle, which French authorities began dismantling this week.

Amran says his mother told him he has an uncle in the U.K. Somehow, he's hoping to get there.

Felicity Parsisson has been trying to get Amran to attend a makeshift school in the Jungle. She works with the British charity Jungle Books, which set up a library and helps the children here. Parsisson says unaccompanied minors are very vulnerable because the camp is open and anybody can enter and leave as they wish.

"Many of these kids have been here for a long time now, and it's hard," she says. "The longer they're out of the school system, the longer they're here without proper caretaking and responsibility, the harder it's going to be for them in the future."

With the war in Syria now in its fifth year and violence continuing in Iraq and Afghanistan, experts predict there will be a lost generation of displaced children who have spent their formative years out of school and living in the rough.

For Migrants In France, Life In 'The Jungle' Has Changed

Living In 'The Jungle,' Migrants In France Seek A Permanent Home

Minors On Their Own

The number of unaccompanied minors traveling to Europe from the Middle East and Africa is growing. Sweden and Germany — where most unaccompanied minors have headed — registered 95,000 last year alone. The children are living in special facilities, where their privacy is protected. Unlike my chance meeting with Amran in Calais, it's very difficult to talk to one of the asylum seekers there.

According to international law, based on the Geneva Conventions, countries bear a special responsibility to protect minors. But it seems to depend entirely on where they end up.

When I was reporting on this issue in Sweden, I learned that unaccompanied minors are each assigned a legal guardian. But in this camp in France, neither the French nor British governments are keeping track of minors.

Christian Salome of the charity Auberge des Migrants says they've been pushing French and British authorities to take responsibility for the children here.

"We asked for somewhere to take care of underage people, even if they want to leave France and go to the U.K.," says Salome. "Normally, in every country, the government is obliged to take care of children, even if the children aren't from that country."

Salome estimates there are anywhere from 300 to 400 unaccompanied minors living in the Jungle in Calais. And with parts of it being demolished this week, he's worried about their fate.

Europe's disjointed and arbitrary handling of the migrant crisis is hardest on unaccompanied minors, says Sarah Crowe of UNICEF. They're often lost and vulnerable when borders suddenly close and the rules change.

"This is a point at which smugglers and traffickers will be preying upon the unaccompanied," says Crowe. "They clearly don't know what's going on. They don't speak the language, and smugglers take advantage of that."

Unaccompanied minors usually travel in groups, with the older ones taking care of the younger. In the Jungle, Amran isn't completely alone. Another asylum seeker, 35-year-old Farid Hamdan, also from Afghanistan, has taken him under his wing. Hamdan says he has four children of his own back home.

"My heart is saying help him because he's only a kid," says Hamdan. "He has nobody else here to look after him. Sometimes I give him a little money to buy cookies or I find clothes to give to him. Because, you know, he's a kid and he doesn't know anything."

Amran says he used to sleep in a tent in the mud. But now he shows me a rough lean-to built for him by a charity group. There's a single foam mattress and trash on the floor. Water leaks through a hole in the tarp roof.

Amran says he hasn't been to school in two years. But he has tried to jump on a truck going to Britain. He says it was scary. The police were chasing them, and he won't try that again.

After talking to me for a while, Amran says he's getting bored. And, like any other kid, he runs off to play.