Accessibility links
Spain's First Black Member Of Parliament And The 'New Politics' : Parallels Rita Bosaho is a nurse turned politician, born in Equatorial Guinea but raised by a white foster family in Spain. "I hope I can empower minorities," she says. 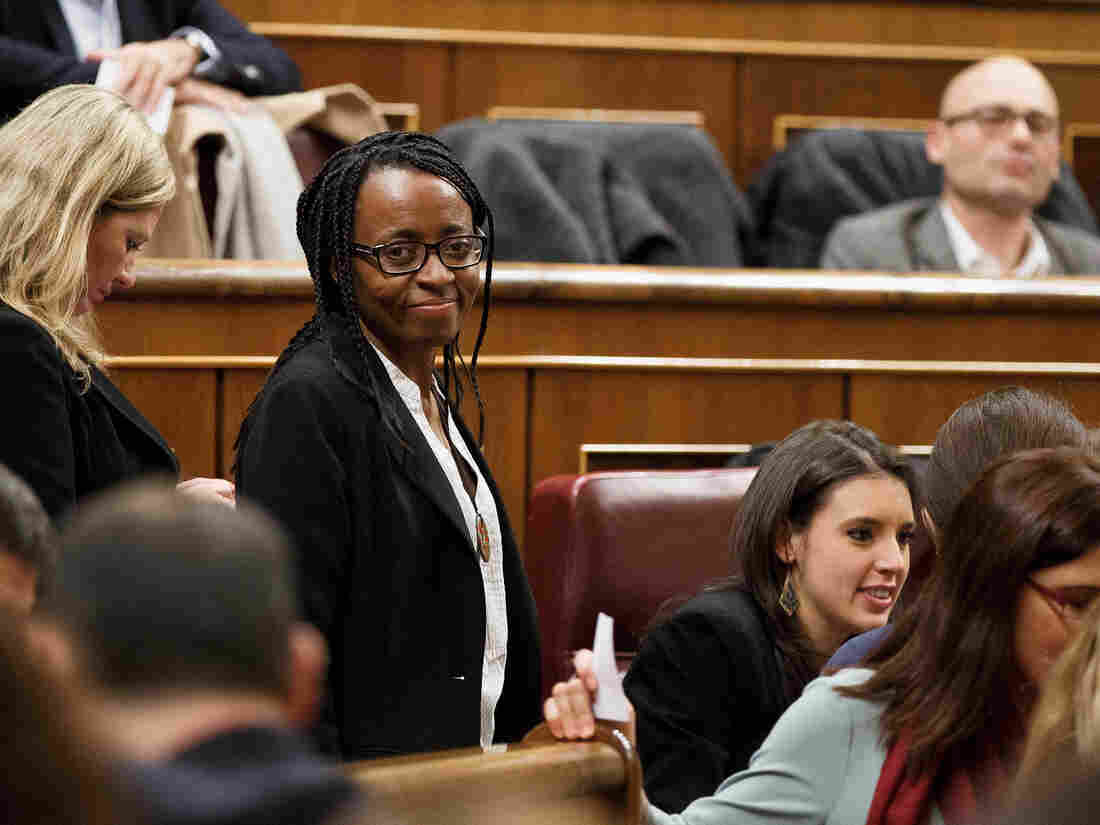 Rita Bosaho, shown here in January, is the first black member elected to Spain's parliament. Born in Equatorial Guinea and raised in a foster family in Spain, she trained as a nurse before entering politics two years ago. Pablo Blazquez Dominguez/Getty Images hide caption 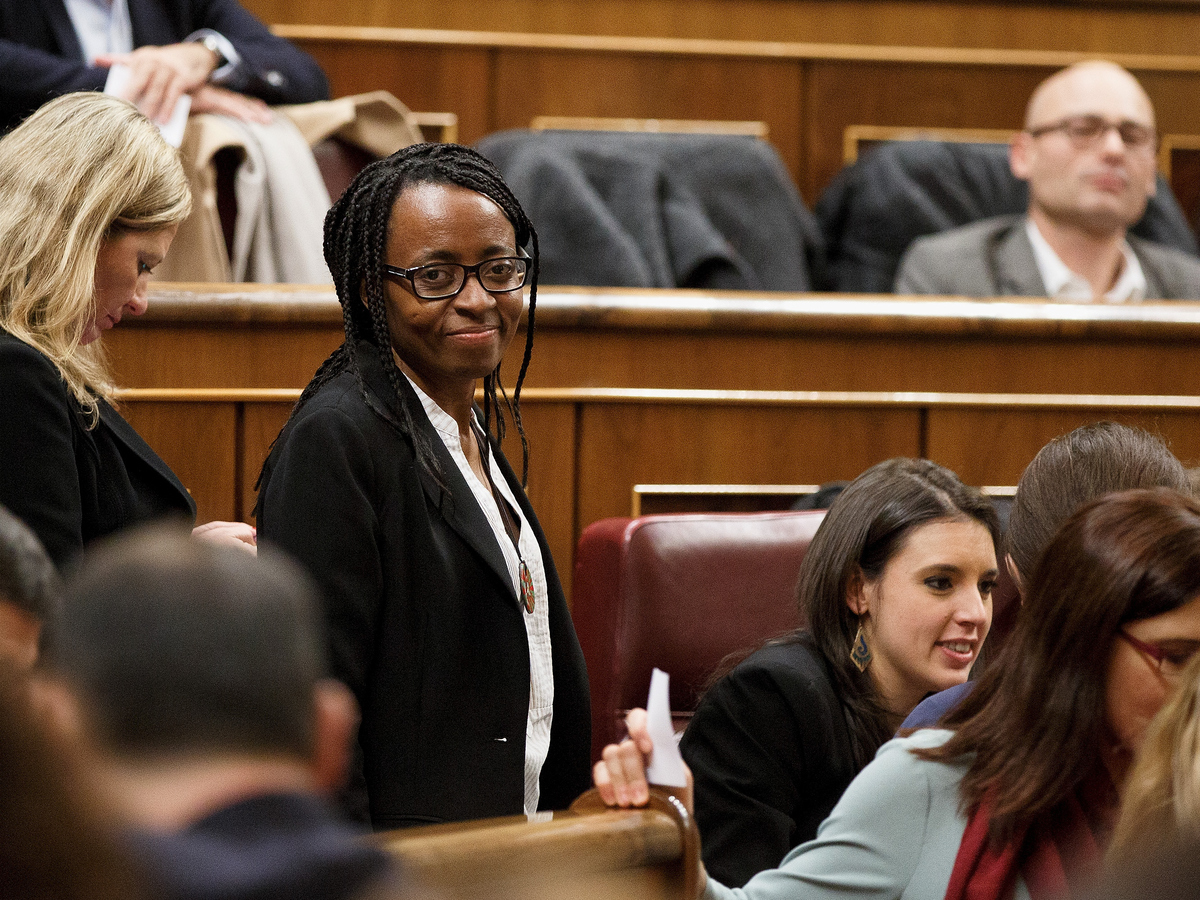 Rita Bosaho, shown here in January, is the first black member elected to Spain's parliament. Born in Equatorial Guinea and raised in a foster family in Spain, she trained as a nurse before entering politics two years ago.

As hundreds of thousands of Arab and African migrants arrive in Europe, Spanish lawmakers meet to discuss the continent's crisis — and all eyes are on one woman. She's the only national politician whose skin is the same color as many of the African migrants crossing the Mediterranean to Spain. But she made a different journey from Africa.

"I was born in Equatorial Guinea when it was a Spanish colony," explains Rita Bosaho, Spain's first black member of parliament. "My parents died when I was very young, and I came to live with a foster family in Spain."

Bosaho's foster dad was in the military, so they moved around, living in several Spanish cities. She was the only black child in a white foster family — and in all of her schools, until university.

Compared with the rest of Europe, Spain is relatively homogenous. It's traditionally sent emigrants abroad, rather than receiving them — especially in the 1970s, when Bosaho was growing up. She's 50 now.

"When I was little, I learned to read from a storybook about white explorers and black cannibals in Africa," she says. "I grew up being scared of where I came from."

That worried her foster parents, Bosaho says. She credits them with teaching her the values of equality and justice. She became a hospital nurse and volunteered with disadvantaged populations of Roma and other minorities in the rough north barrios of Alicante, on Spain's coast.

In elections Dec. 20, she won a seat in Spain's parliament — the first person of color, male or female, to do so in modern Spanish history. Bosaho promises to represent the interests of ethnic and racial minorities in Spain.

She is still coming to terms with her newfound fame.

"I feel humbled and proud, and hope I can empower minorities," she says. "There are lots of people who don't understand that I'm Spanish. They see that I'm black — and think those two things can't go together."

But the Spanish population is changing. More than 10 percent are legal immigrants who've become Spanish citizens — though most are white, from Latin America or Eastern Europe.

Spain Fines Team Of Racist, Banana-Throwing Fan, But Is It Enough?

Spain received a wave of Latino immigrants in the 1990s, during its economic boom years, when there were ample jobs in construction and home health care. Spanish law allows citizens of most former Spanish colonies, many of which are in Latin America, to obtain Spanish passports within just two years.

Some of those Latinos returned to their countries of origin after Spain's economy began faltering in 2008. Spanish unemployment remains stuck above 20 percent, and many immigrants worry they are over-represented in the jobless ranks while under-represented in politics.

At a recent community gathering in Valencia, on Spain's Mediterranean coast, immigrants from several Latin American countries packed into a local Podemos office to meet Bosaho, their new MP.

"I'm so proud to see a woman — an African woman, no less — representing us in parliament," says Patricia Villalba, an unemployed 58-year-old originally from Ecuador. "Immigrants should be more visible in Spanish society."

Arab and African migrants and refugees typically want to go to more prosperous northern Europe, and while Spain has agreed to accept more than 17,000 refugees under European Union quota plans, just a small fraction of those have arrived from landing zones in Greece and Italy. Madrid's city hall is nevertheless draped in a "Refugees Welcome" banner.

Unlike in other parts of Europe, there is no major far-right, anti-immigrant political movement here, though racism exists. In 2014, a banana was hurled at a Brazilian soccer player in Spain's Villareal stadium, and spectators taunted a Spanish team's Senegalese player by making monkey noises.

Bosaho's own party, Podemos, is criticized for promising dignity to unemployed protesters in the street but not yet backing that up with policy. Bosaho has yet to author any legislation. But she's changing perceptions about those who do.

The stereotype of a Spanish politician "is always a man — the typical white man," says Aitana Christensen Ribera, an 18-year-old high school student who met Bosaho when the lawmaker visited her high school. "And now you have her! That's the new politics."

During a question-and-answer session at the high school, another student, Rahma Mohamed, an immigrant from Western Sahara, takes the microphone and asks her MP a personal question.

Bosaho thanks the student for her question. She thinks for a moment before breaking out into a smile.

"You and I — we're exactly the same," Bosaho tells the girl. "We're minorities, we're paying our taxes and we have voices. I think I can help."