Accessibility links
5 Years After Japan Disasters, 'Temporary' Housing Is Feeling Permanent : Parallels Deadlines to rehouse evacuees have come and gone. It's still not clear when they might go home, and if so, what would they return to?

Temporary is lasting a long time for evacuees in neat blocks of prefabricated housing in Fukushima city. The wood siding on their tiny homes looks new. But these trailers are stretching into their fifth year of use.

Saki Sato, 77, shows me around her home, where she lives alone in a kind of limbo. Each room is about the size of a king-size mattress.

She is among the nearly 60,000 Japanese who still find themselves in temporary trailer homes after having to flee five years ago following a magnitude-9 earthquake on March 11, 2011. The tremor unleashed a tsunami that reached a height of 128 feet and caused a nuclear disaster that contaminated soil with radiation in a large patch of surrounding territory.

Sato's former village of Iitate is in the radiation evacuation zone. It's still not safe to return. On her wall along the narrow entrance in her temporary home are photos of loved ones. Her son. His kids. That's where her extended evacuation hits her the hardest.

"I used to see my son regularly," she says. "But now he doesn't come to visit. It's too exhausting for him to come this far to visit. It's really hard."

Of the estimated 19,000 people who died in the disaster, most drowned within minutes. The tsunami also shut down the Fukushima Dai-ichi nuclear plant's cooling system. It triggered meltdowns in three of its nuclear reactors that spread radiation plumes as far as 25 miles away. 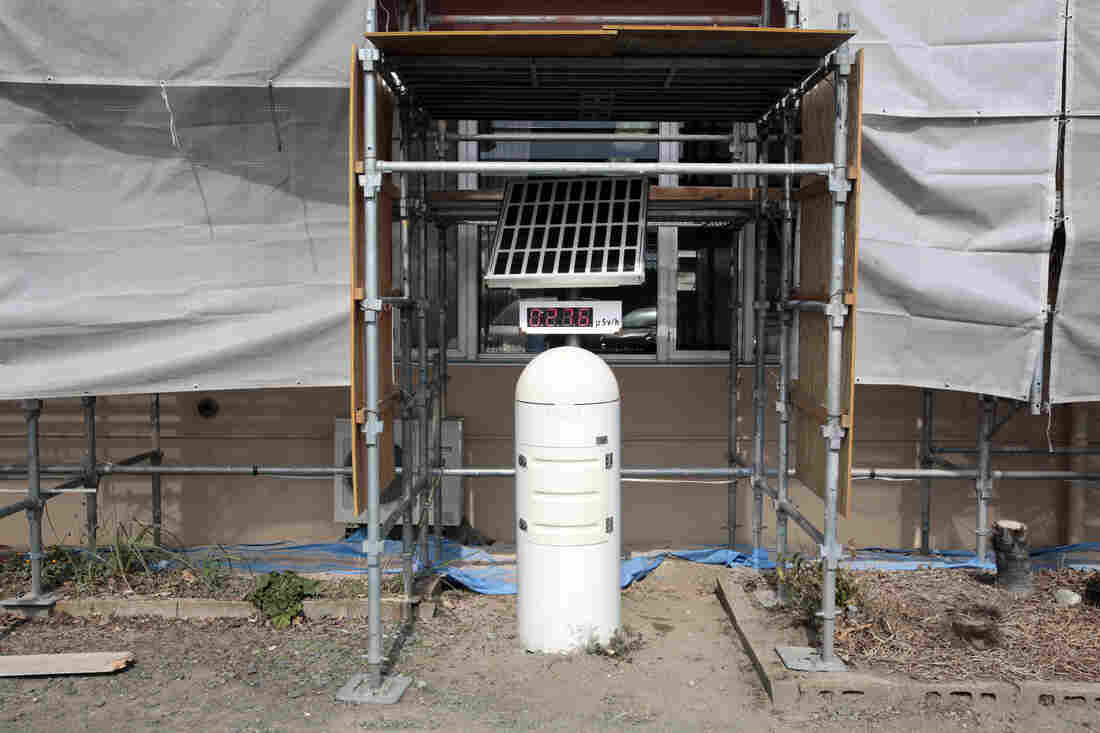 A radiation monitoring post next to one of the temporary homes. It indicates 0.276 micro sv/h, which is three to four times higher than the normal level. Kosuke Okahara for NPR hide caption

"Many, so many lessons learned," says Yuichi Okamura, a spokesman at TEPCO — the Tokyo Electric Power Co. — which owns the plant.

Government and outside investigations show TEPCO missed several opportunities to prevent the meltdown. Now prosecutors may hold TEPCO leaders criminally responsible. TEPCO's former chairman and other leaders were indicted just weeks ago on charges they failed to prevent the Fukushima meltdowns.

Inside TEPCO's Tokyo offices today, the company says it's trying to look forward.

Next month, the plant will begin a decommissioning process that will take 40 years. At the government level, the cost of decontaminating houses and farmland in Fukushima prefecture alone carries a $50 billion price tag. 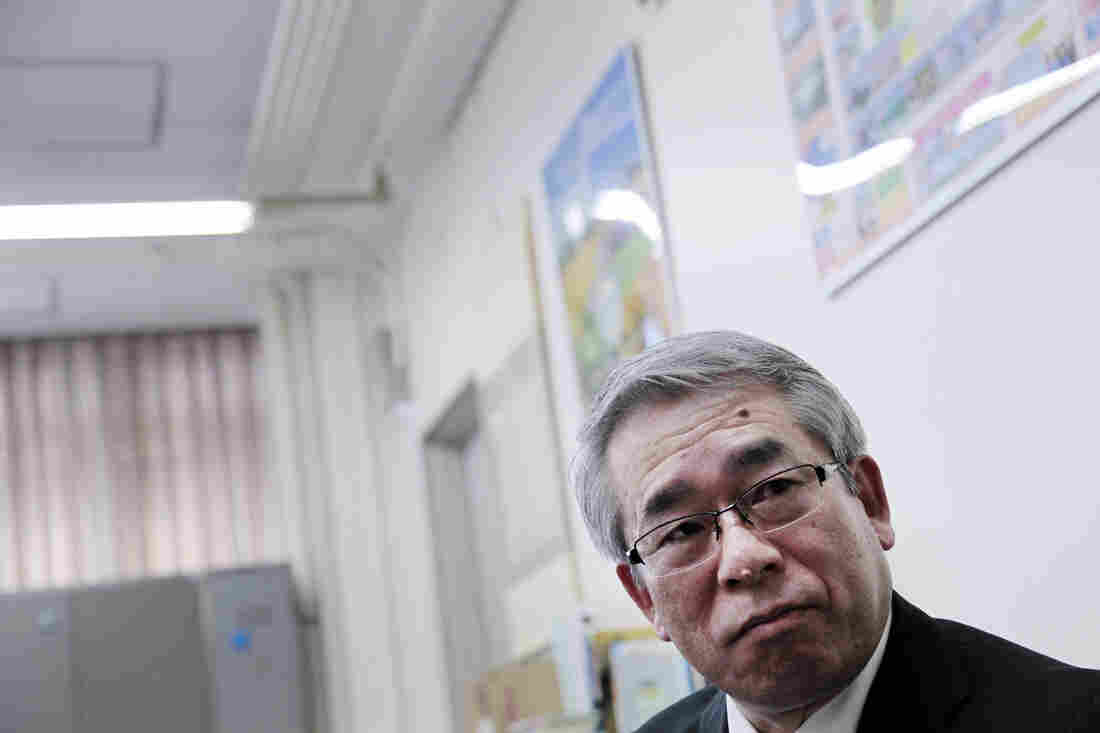 Hatsuo Fujishima, director of general affairs of Fukushima prefecture government, talks about the reconstruction of the region. Kosuke Okahara for NPR hide caption

Recovery involves rebuilding roads, bridges and power lines. It also means helping rehouse many of those still displaced by the storm. Officials have already missed various deadlines for re-housing evacuees. Part of the problem is competition for construction workers and materials. Japan's government isn't just rebuilding the coast — it's also readying itself for the 2020 Olympics.

Fukushima prefecture, just one of several Japanese prefectures affected by the disasters, estimates it's only about halfway to its decontamination and recovery goals.

"In terms of infrastructure, our recovery has been quite fast, I would say," says Hatsuo Fujishima, director of general affairs of the Fukushima prefecture government. He's in charge of recovery efforts for the prefecture.

"The difference in Fukushima is the radiation problem. Radiation takes a long time to disappear," Fujishima says.

When it is safe to go home again, there's also the issue of what people would return to. Communities, schools, businesses that once existed are no longer there. 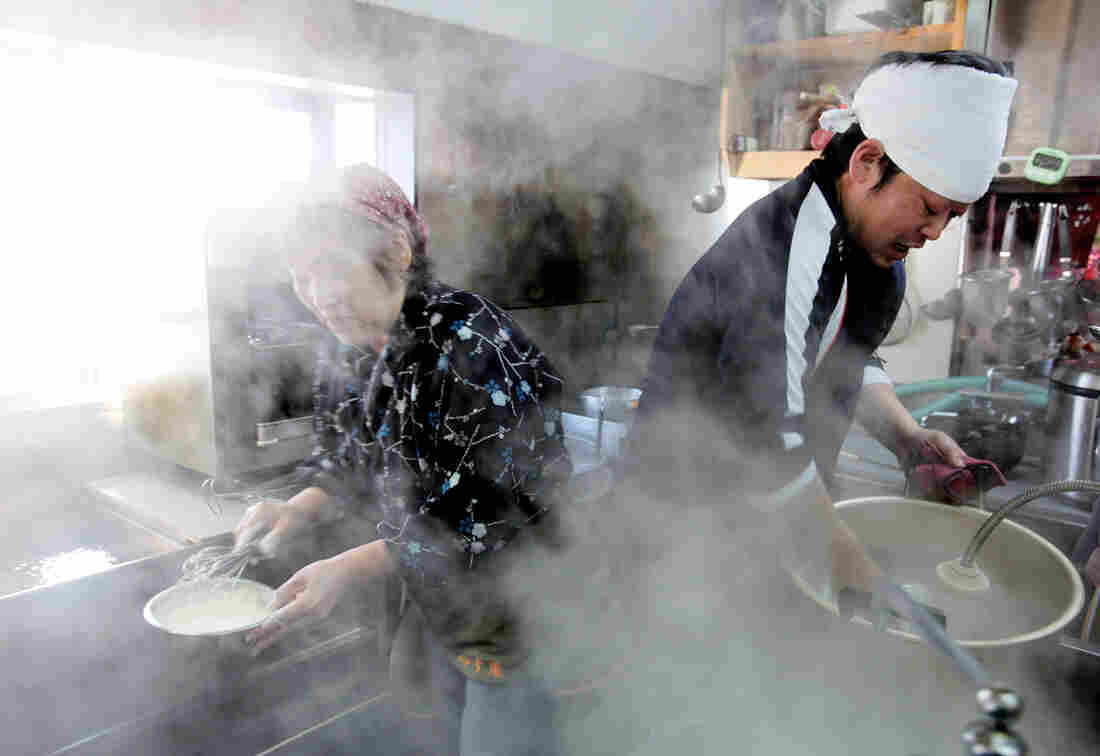 Yoshiharu and Chiyoko Takahashi and their son, Hiroshi, are evacuees from Iitate village. They reopened their noodle restaurant, Ebisu-An, which was the oldest restaurant in the village. It was opened by Yoshiharu Takahashi's father 63 years ago. Kosuke Okahara for NPR hide caption

One business forced by radiation to relocate is Ebisu-An, a family-owned restaurant specializing in freshly made udon noodles. These days, Hiroshi Takahashi and his mom and dad are working in a cramped kitchen in a location far from the coast, in Fukushima city.

After the village was evacuated, the family opened in Fukushima city and became a gathering place for Iitate village evacuees who wanted a sense of home hundreds of miles away from home. But the bonds of the village have since frayed.

Takahashi says while many villagers showed up here in the immediate aftermath of the triple tragedy, he doesn't see that many of them anymore. But he should be able to move the business back to Iitate next year. Leaders in charge of the cleanup are reopening parts of Iitate in March 2017 following years of decontamination.

"It's a little complicated emotion I'm feeling," he says of the prospect of returning to the village. "Because even if I go back to Iitate, I'm not sure how many Iitate refugees will also come back."

That's the big question — after all the effort and money spent on reconstruction: When can evacuees return, and will they want to? 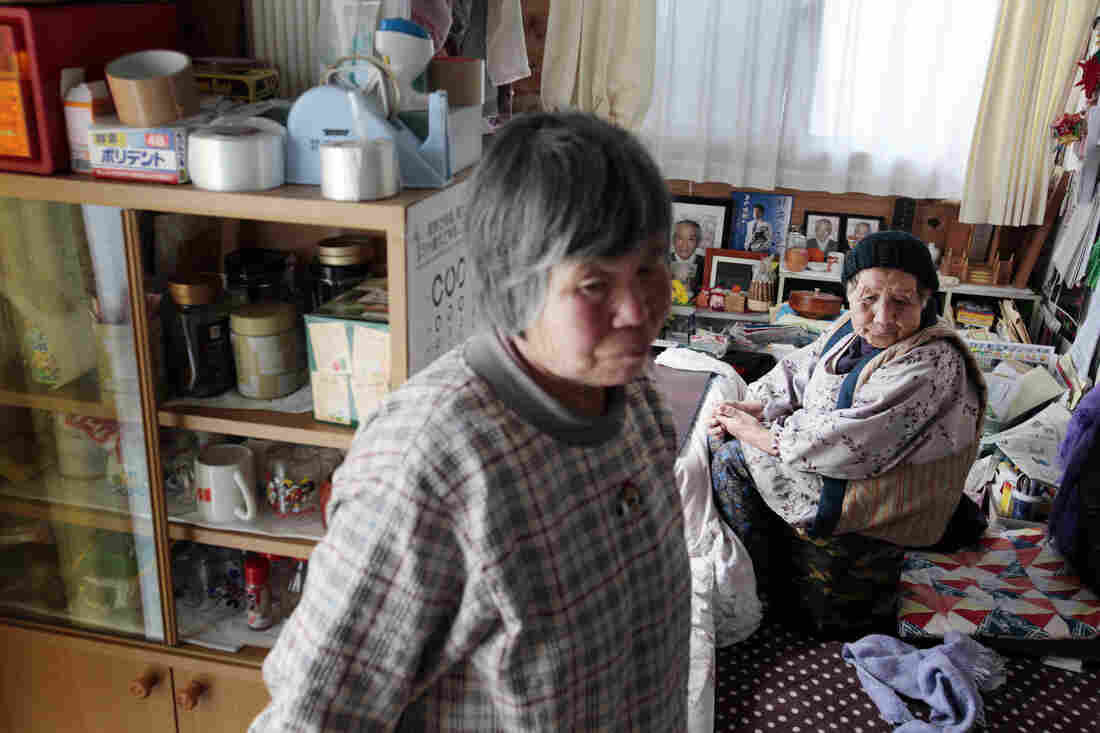 Saki Sato (left), 77, and Chikuyo Yokoyama, 90, are neighbors in the housing project, and visit during the day. Sato lives alone, and Yokoyama lives with her son. Kosuke Okahara for NPR hide caption 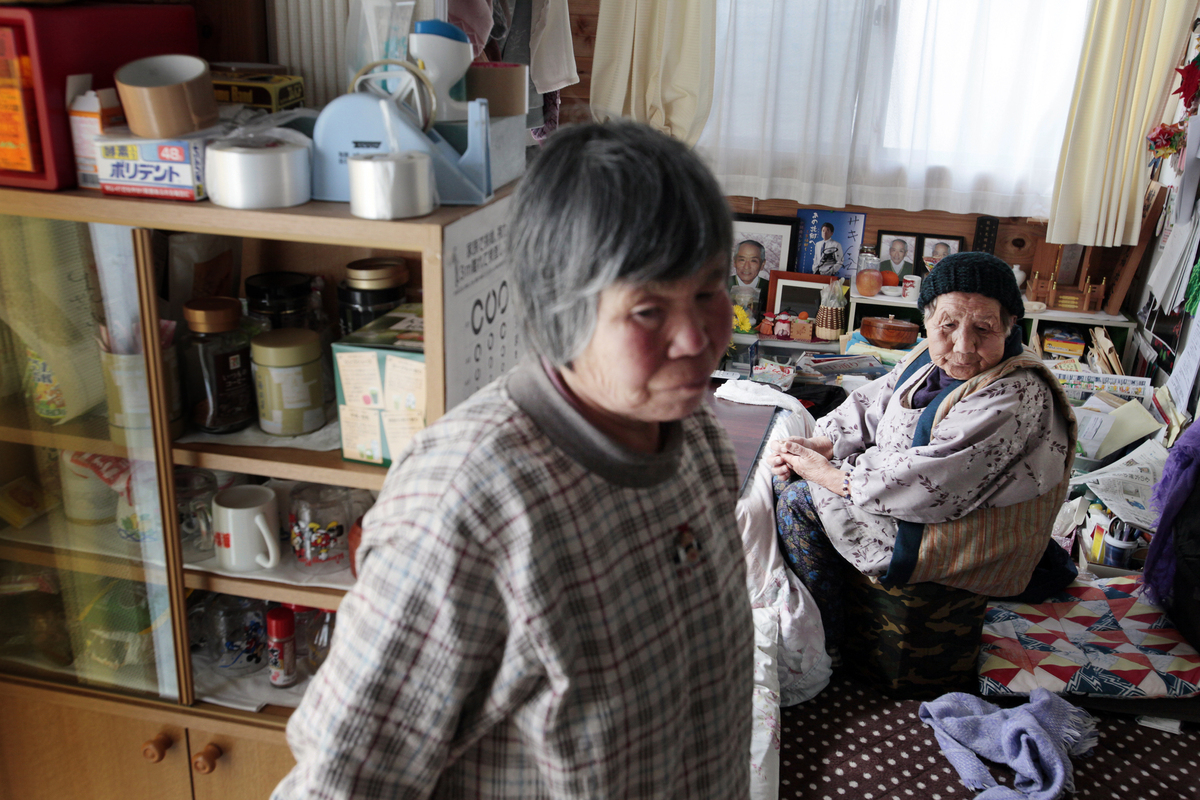 Saki Sato (left), 77, and Chikuyo Yokoyama, 90, are neighbors in the housing project, and visit during the day. Sato lives alone, and Yokoyama lives with her son.

Rebuilding has taken so long, and public safety fears are so entrenched that the Fukushima government estimates half of the evacuees may never return. In other villages that have been deemed safe, the return rate has been far less than that 50 percent estimate.

In the neighborhoods of temporary housing, Sato, the 77-year-old, and other elderly residents have a routine. Afternoon teas, flower arrangement classes, walks with neighbors.

"Also, my friends are living here now," she says.

She doesn't know if she'll ever go home to the village. Five years after a forced evacuation, Sato and thousands of others just like her are still in limbo.

Akane Saiki contributed to this story.