Accessibility links
In South Sudan, A Struggle To Get, And Keep, Kids In Schools : Parallels Nearly 2 million school-age children live in South Sudan, but more than half don't attend school. Violence, displacement, destroyed schools and a shortage of teachers are all part of the problem. 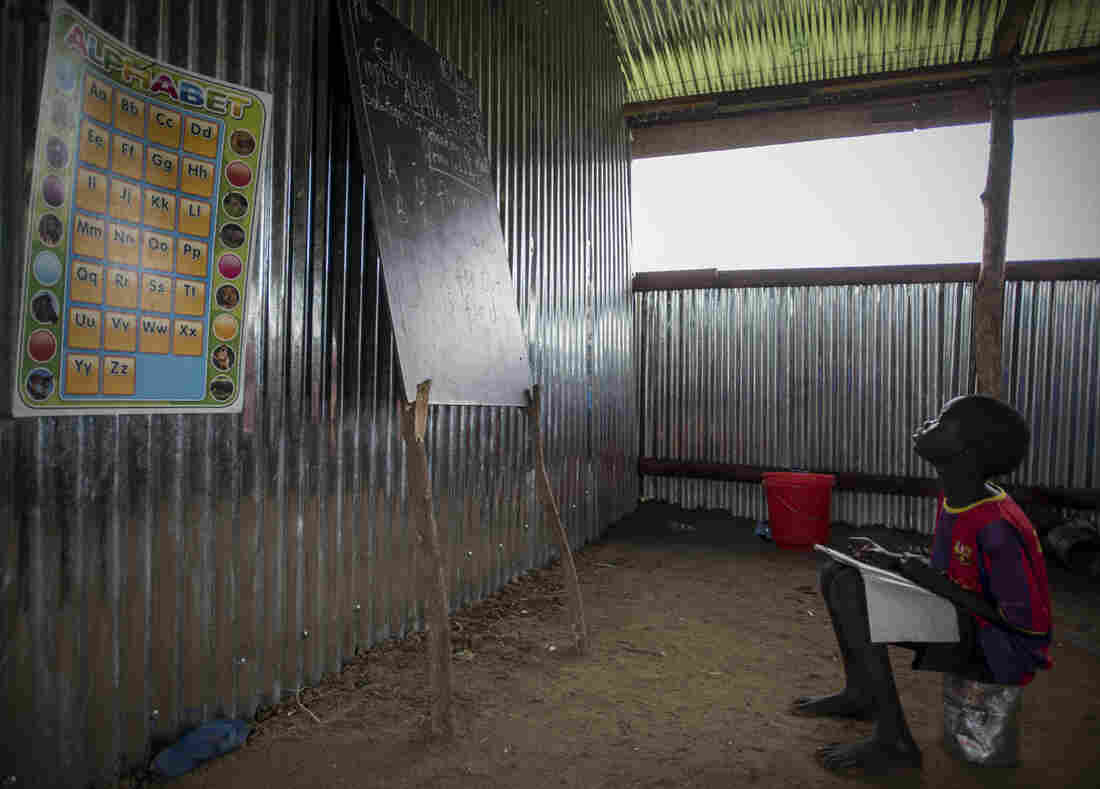 A child in South Sudan studies in a school. Fewer than half of the school-age kids are in school in South Sudan, one of the world's poorest countries, which has also been plagued by war. Sebastian Rich/UNICEF South Sudan hide caption 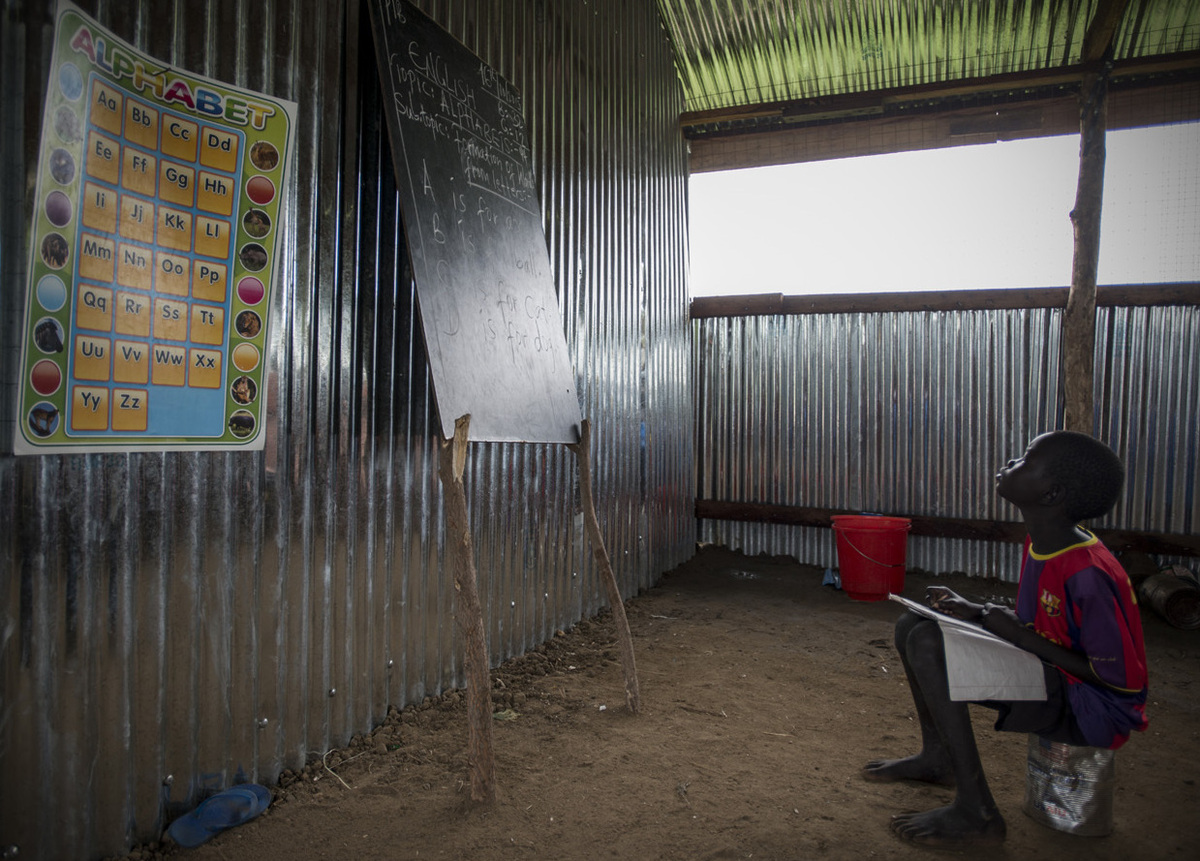 A child in South Sudan studies in a school. Fewer than half of the school-age kids are in school in South Sudan, one of the world's poorest countries, which has also been plagued by war.

When South Sudan gained independence from Sudan in 2011, hopes were high that the world's newest country could finally be free of decades of violence that had afflicted the region. Instead, a civil war broke out two years later, killing thousands and displacing more than 2 million people.

He Fled Sudan And Made A New Life In The U.S. So Why Go Back?

With a population of 11 million, South Sudan has a higher proportion of children out of school than any other place in the world. More than half of the country's primary and lower secondary school-age children, up to age 15, are not attending school, according to UNICEF.

February marked the beginning of the country's school year, and already there are signs more students are being kept from classrooms. UNICEF says looting and violence in the city of Malakal has effectively left more than 13,000 children without education access. And, more generally, it's too soon to tell how many of the country's estimated 1.8 million schoolkids are enrolled, said Phuong Nguyen, UNICEF's chief of education and adolescent development in South Sudan.

In many cases, the odds are stacked against them.

"Violence breaks out and spreads, so these children are not displaced once or twice — they've been displaced several times in the last couple of years," Nguyen said. "People are running for their lives."

The instability, she said, makes it difficult to establish spaces of learning.

Many Schools Are Shut Or Destroyed

Many schools have either been closed by the government or occupied and damaged by internally displaced people or armed groups. More than 800 schools were destroyed between December 2013 and August 2015, when the latest peace deal was signed.

More than 6,000 schools remain operable, but they all lack resources.

"Most of the schools have very poor facilities and anywhere else, they wouldn't even be called schools," Nguyen said. "It's basically a tree and a blackboard."

In South Sudan, only 27 percent of adults can read. In many cases, teachers aren't much older than their students. Nguyen said about 37 percent of teachers have actual teaching certification. An equal percentage have only attained the equivalent of an 8th grade education. The rest have either unchecked or unconfirmed teaching qualifications.

Still, the situation isn't entirely bleak. The number of schools, teachers, classrooms and students have all increased since South Sudan gained independence. And even in the most basic circumstances, "education activities can happen. I've seen education happening," Nguyen said. "A class under the tree with the grade 8-aged teacher is not ideal, but it is a start. It tells you that there is a desire and hunger for education."

Schools can provide a safety net for children whose lives have been scarred by violence. The crayon drawings by some children who do attend school provide a glimpse of the horrors they've seen: images of huts on fire, men with guns and women covered in blood, Nguyen said.

For those who don't attend school, bigger problems can follow.

"Adolescent boys, when they remain idle, without education, without any positive engagement, are likely to be recruited by armed groups and armed forces," she said. "Girls are at huge risk of gender-based violence and forced marriage."

For Daniel Majok Gai, who builds schools through his nonprofit Project Education South Sudan, the current crisis echoes what happened in his childhood. In the 1980s, starting at age 6, he became one of the so-called Lost Boys — the nearly 20,000 children displaced or orphaned during Sudan's protracted civil war that lasted from 1983 to 2005.

He earned a high school degree at a refugee camp in Kenya before coming to the United States as a refugee, after 14 years of being displaced. He returned to South Sudan in 2011 to focus on providing education.

His project has built a primary school and a high school, as well as a girls' boarding school, with the goal of creating a "conducive and friendly teaching environment for all children," he says.

Nguyen visited a town where armed groups recruit young boys to fight and met with a mother who'd never received a formal education.

"She was in tears because she didn't think there was ever an opportunity for anyone in her family to have an education," Nguyen said. "So the prospect of her 16-year-old boy going to school for the first time — it was huge. You would have thought we told him he was going to Harvard."