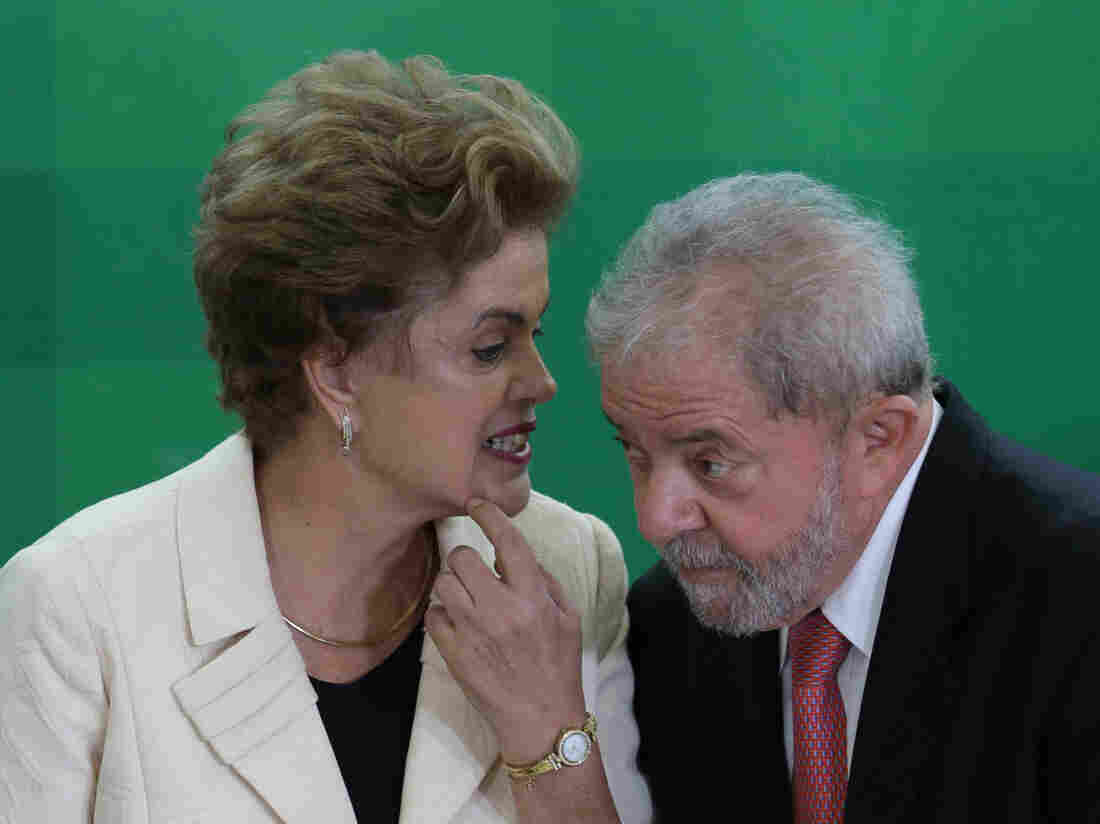 Both President Dilma Rousseff and former President Luiz Inacio Lula da Silva, shown here during his swearing-in ceremony as the chief of staff March 17, have been caught up in the wiretap firestorm. Eraldo Peres/AP hide caption 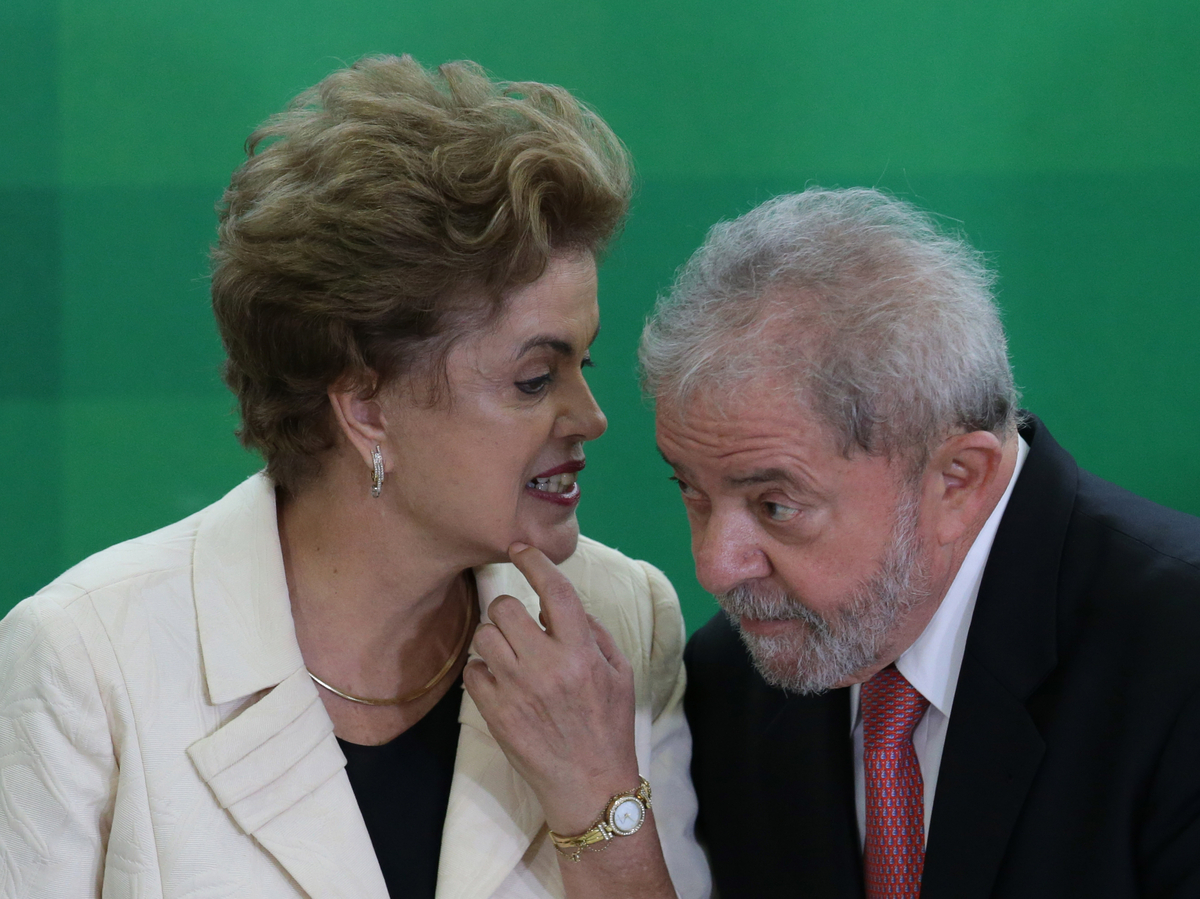 Both President Dilma Rousseff and former President Luiz Inacio Lula da Silva, shown here during his swearing-in ceremony as the chief of staff March 17, have been caught up in the wiretap firestorm.

In Brazil, wiretaps of senior officials, including the current and former presidents, have set off a political firestorm.

The outcry has mainly centered on whether it was legal for a judge to release the recordings last week, and why he did it. President Dilma Rousseff is in the process of being impeached. Her predecessor, Luiz Inacio Lula da Silva, known as Lula, is implicated in a massive corruption scandal at the state oil company. His phone was being tapped as part of that investigation, which is the source of the private discussions that have now been made public.

But Brazilian women heard something else in the conversations that was deeply troubling. Sexism is rampant in the corridors of power — even in a country with a woman as president.

"The discourse from both the left and the right of the political spectrum is one of disrespect for women," she says.

The male politicians' conversations were taped by federal police, under a judge's orders, when they thought they were speaking in private. What they reveal is men talking in ways that are raunchy, profane and "sexist," Mello says.

In one of those taped phone calls, Lula is speaking with Paulo Vannuchi, an ex-human rights minister, and they are discussing making trouble for a prosecutor who is investigating Lula for influence peddling. (A clip of what appears to be the conversation can be found here; Portuguese speakers may find some of the language objectionable).

Lula uses a vulgar slang word for the clitoris to refer to his own female party supporters. "Where are the women with tough clits in our party?" Lula asks, to laughter from the former minister. 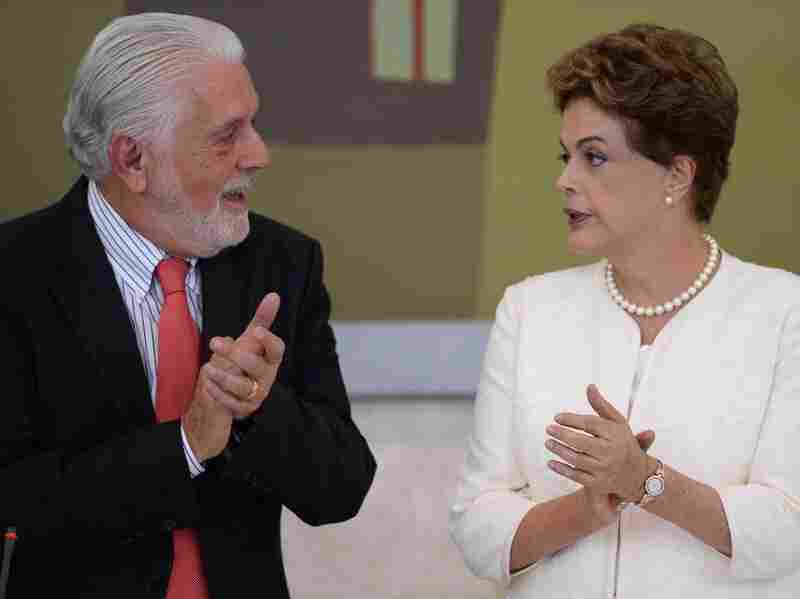 Brazil's President Dilma Rousseff speaks with her chief of staff, Jaques Wagner, in January. Wagner was recorded telling Silva, the former president, it was "good" that a female opposition politician was called a "whore." ANDRESSA ANHOLETE/AFP/Getty Images hide caption 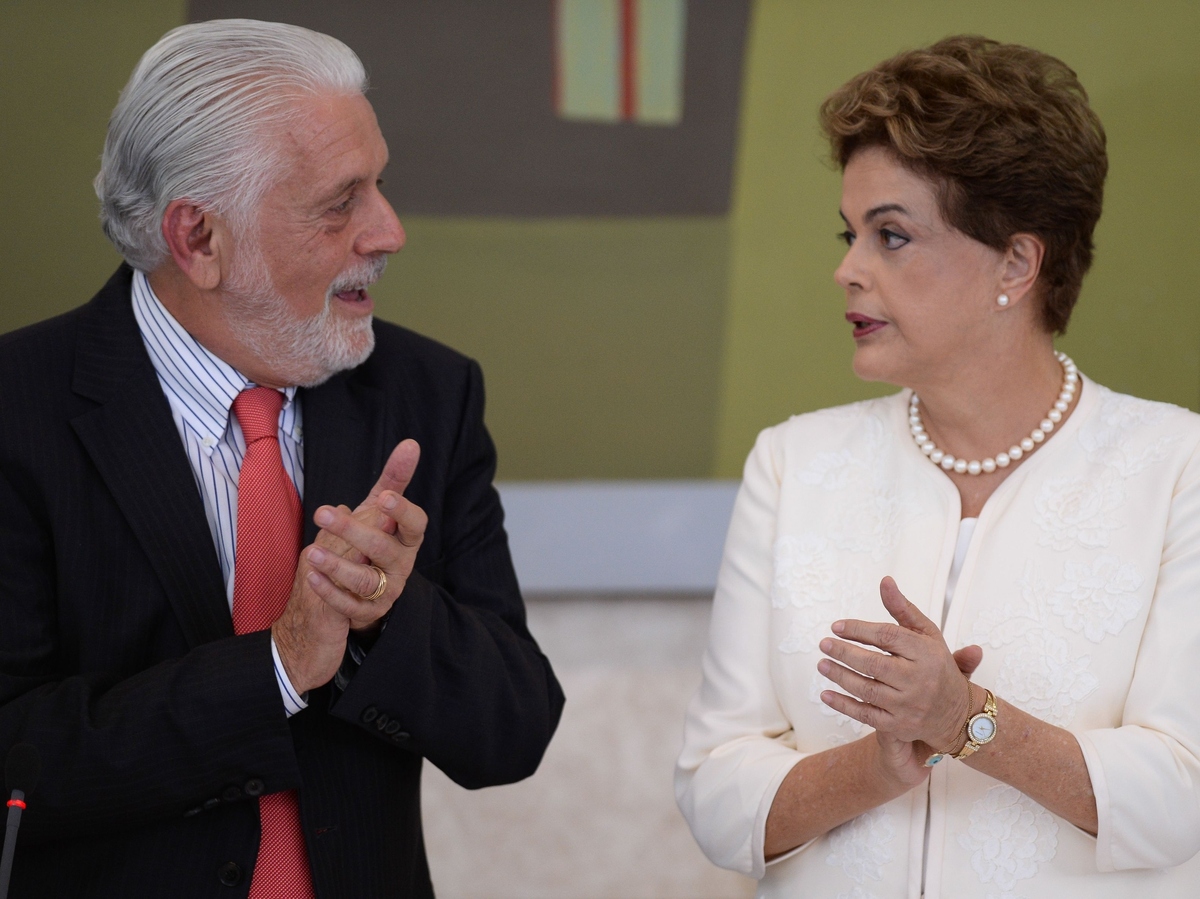 Brazil's President Dilma Rousseff speaks with her chief of staff, Jaques Wagner, in January. Wagner was recorded telling Silva, the former president, it was "good" that a female opposition politician was called a "whore."

In another conversation, Lula gleefully recounts how an opposition female politician was called a "whore" at an anti-government demonstration. The current president's chief of staff, Jaques Wagner, responds: "It's good, that way she'll learn" — learn a lesson.

Lola Aronovich, a feminist blogger, says there has been a lot of discussion by women about the taped calls and what they show. "It's an example of the machista culture to have two men discussing a woman this way," she says.

In another profanity-laced call, Eduardo Paes, the mayor of Rio de Janeiro, mocked the president for her dour demeanor. A clip of what appears to be the conversation is here.

Mello says Rousseff is constantly picked apart for being a woman.

"Dilma Rousseff made political mistakes? Fine. Let's talk about that. Let's not talk about her body type, her social graces or if she is feminine enough or not," Mello says.

Still, in one exchange, Rousseff herself seemed in on the joke.

In an excerpt of what appears to be this conversation, she laughs when Lula quipped that his longtime elderly secretary saw a police raid on her house as a "gift from God." The insinuation was the secretary should have been happy to have a group of men suddenly appear uninvited in her bedroom.

That struck a particularly sour note in a country that has one of the world's highest rates of violence against women.

Mello says that the sniggering tone of the conversations has real-life implications.

"Women are less than 10 percent of the lawmakers in Brazil. We are not allowed a seat at the table," she says. "What makes me so sad in this current political crisis is how woman here are still viewed and treated."