Accessibility links
A Remote Syrian Airstrip Hints At A Growing American Military Role : Parallels In northeastern Syria, local residents are watching the comings and goings from a rural airstrip they say is America's Syria footprint in the anti-ISIS war. 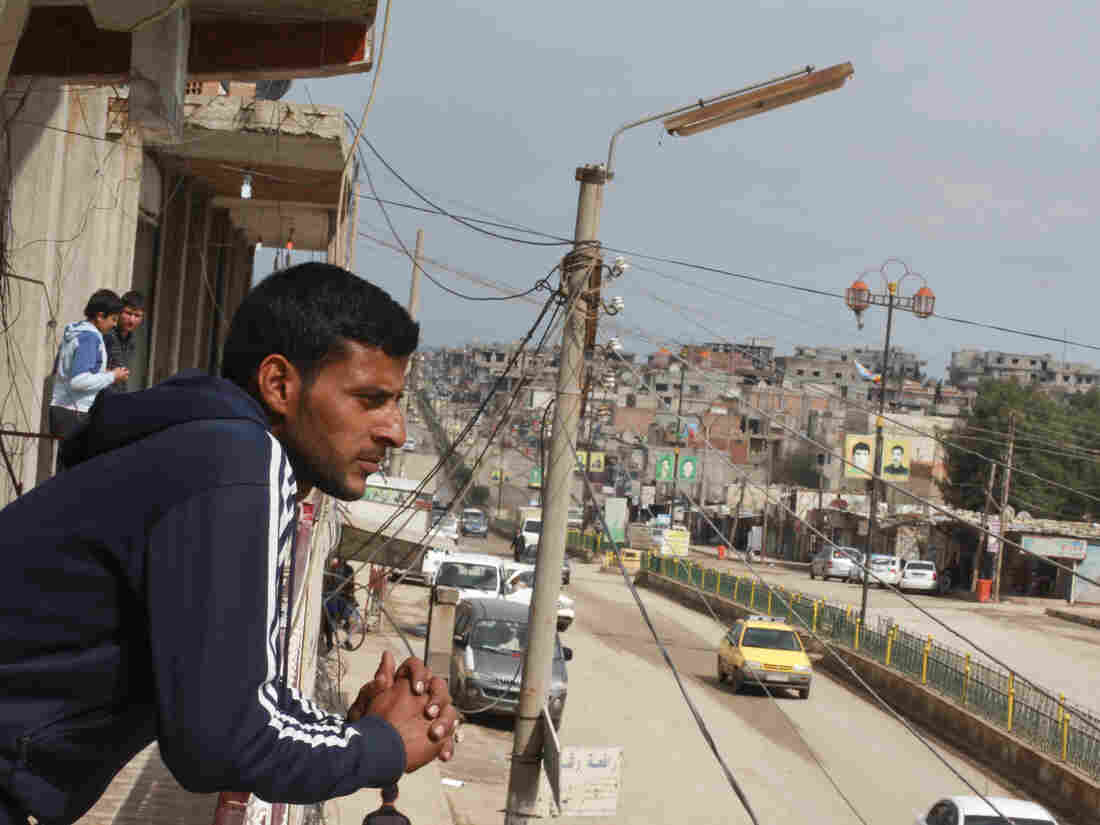 Manaf Ibrahim takes a break from making sandwiches in a small town close to an airstrip he believes the U.S. is using to supply its advisers on the ground in eastern Syria. Alice Fordham /NPR hide caption 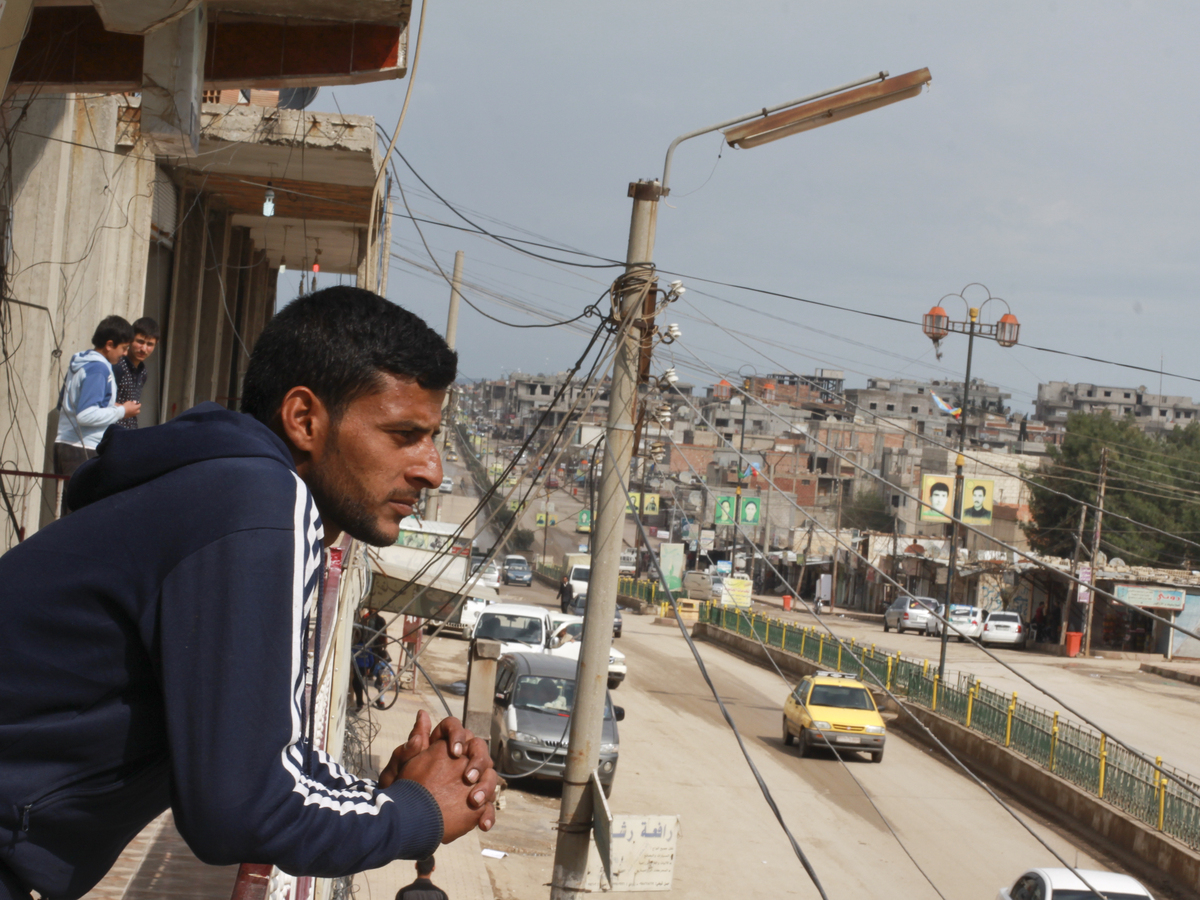 Manaf Ibrahim takes a break from making sandwiches in a small town close to an airstrip he believes the U.S. is using to supply its advisers on the ground in eastern Syria.

There are no checkpoints outside it. Nothing to stop people driving past — just two Syrian Kurdish guards out front, smoking cigarettes. The strip itself is just visible behind berms that earth movers are bolstering.

The Pentagon denies it has "taken over" this airstrip. But local people and officials say aircraft regularly fly in and out of it, and a U.S. spokesman concedes that a small number of U.S. military advisers inside Syria do need resupply from time to time.

After five years of profound American reluctance to become involved in Syria's civil war, the U.S. military has gradually increased on-the-ground support to local, Kurdish-dominated forces in their fight against ISIS, and appears to be incrementally building a presence in eastern Syria.

After encouraging the Kurds to ally with Arab and other armed groups to form the Syrian Democratic Forces (SDF) in the fall of last year, the United States has delivered ammunition here and sent about 50 military advisers. Local political leaders and commanders say they often have meetings with American military and civilian officials.

'ISIS Won't Even Think Of Coming'

In a town near the airstrip, colored posters hang from lampposts, showing young men and women who have died fighting ISIS. NPR is not specifying the location out of concern that civilians could be targeted by ISIS.

Mahmoud Ahmed, a local official, is the father of one son who has died in the fight. He comes over to introduce himself, shows a picture of his son and says he has two more still battling the extremists.

Ahmed believes — though he doesn't offer evidence — that it is the Americans flying in and out of the nearby airstrip. And he is pleased: "In the future, ISIS won't even think of coming to our area," he says.

Farther into this dusty farming town, Manaf Ibrahim is making hot shawarma sandwiches for the lunchtime rush. He was displaced from Deir Ezzour, a city in eastern Syria partly held by ISIS, and he, too, welcomes the growing American assistance in the fight against it.

Ibrahim, an Arab, has friends fighting against ISIS in the SDF, and says the airstrikes of the U.S.-led coalition have been invaluable. He thinks he saw a convoy with American civilian officials pass his shop a few weeks ago.

"It's nice," he says. "You feel some people are coming here to help you. It's not something against you. If they didn't like us, they wouldn't have come."

When asked if he can trust the Americans, Ibrahim wavers slightly. "In Iraq," he says, "they did something wrong, something political." But here in Syria, he says, he sees something different from the invasion in Iraq.

Rakan Fawaz, a taxi driver, comes over to say his piece about the airstrip. "I'm against it," he says. "I want the Russians to come here." He says that the Americans came to Iraq and "until now it is still making problems."

His doubts reflect wider suspicions about American assistance, even among the people directly seeking it.

As peace talks limp on and world leaders debate possible solutions to the Syrian conflict, Kurdish leaders here say they wish the U.S. military support would translate into bolstering their plan to run a federal region in eastern Syria.

Amina Osse, a Kurdish political official, says she met with Brett McGurk, the president's special envoy to the anti-ISIS coalition.

"We told him that if we are now fighting on the ground, we should be a part of the political side of Syria, too," she says.

She says that although McGurk responded that the Kurdish-led administration of parts of Syria was impressively organized, he gave no indication that the U.S. would support Kurdish political ambitions. The State Department has also made statements to this effect.

As Osse sees it, Russia could be a better source of political support as the Kurds consider their alliances. A rumored presence of Russian aircraft and soldiers near the Turkish border, in the city of Qamishli, has now evaporated since the Russian military has reduced its presence in Syria.

And officials and commanders say they have not received Russian military support here in the east of the country. Kurdish-led advances under Russian air support in western Syria were, they say, "a coincidence."

Osse also attended talks in Moscow, and says she understands that Russia wants the regime in Damascus to stay, "with some changes, like the constitution, and more rights for other groups like Kurds and Assyrians."

But both Americans and Russians, she says, are really only interested in keeping ISIS away for self-serving reasons. "Before ISIS comes to their door, they are supporting us," she says. "This is for their benefit more than the Kurds'."