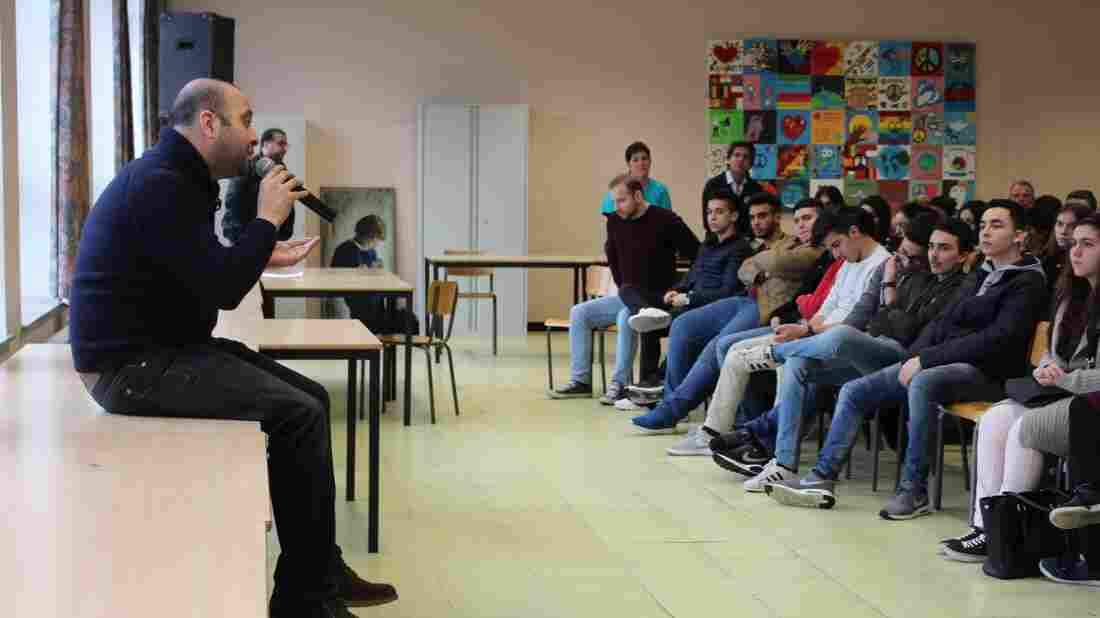 Playwright Ismaël Saïdi speaks to a mostly-Muslim students at a school in the Brussels district of Laeken, where two suicide-bombers grew up. Teri Schultz for NPR hide caption 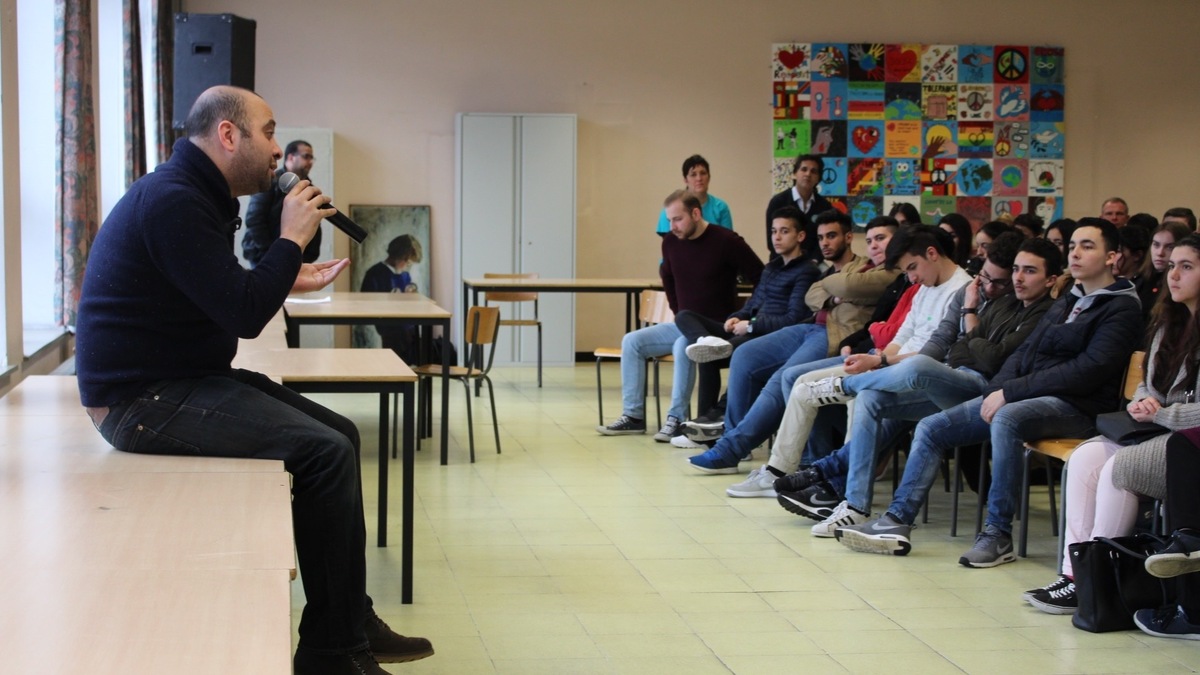 Playwright Ismaël Saïdi speaks to a mostly-Muslim students at a school in the Brussels district of Laeken, where two suicide-bombers grew up.

The Brussels district of Laeken is among those in the Belgian capital with high unemployment, low social mobility and poor integration, creating a lot of frustrated residents — just like the other neighborhoods that produced the attackers in Brussels and Paris. The brothers who carried out suicide bombings at the Brussels airport grew up here.

There's been considerable criticism of these neighborhoods, accusing them of allowing — if not outright fostering — extremist attitudes, and of maintaining a culture of silence. But one school in the district is actively trying to change local culture to be less accepting of intolerance.

At the Maris Stella Institute in Laeken last year, school director Nicole Lewahert was shocked at the reactions of students when Islamists killed a dozen people at the French magazine Charlie Hebdo for publishing cartoons mocking the Prophet Mohammed. Her student body is 80 percent Muslim, she says, and "most of the pupils were telling that it was a good job, and it was normal to kill people who made such cartoons. And we didn't know how to react about it."

Her team spent a nearly a year working up a full-day program celebrating diversity and tolerance. They invited community organizations that work on integration, and a renowned Muslim playwright active in counter-radicalization efforts, Ismaël Saïdi.

Lewahert says that when the Brussels terrorist attacks happened the same week, she was sure everyone would cancel — but that they all vigorously reaffirmed how important it was to go on.

On Friday the long-awaited day arrived, and students were in a festive mood; there was singing and dancing, and several of the roughly 700 students were wrapped in national flags displaying their ethnic backgrounds. They gathered to hear Saïdi speak. 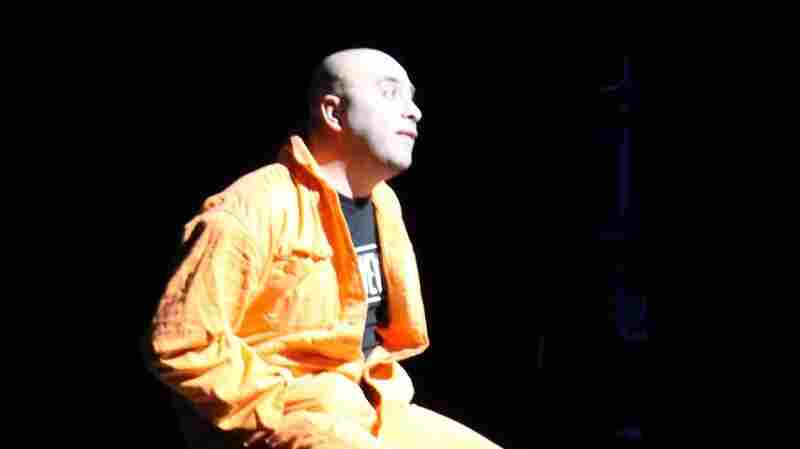 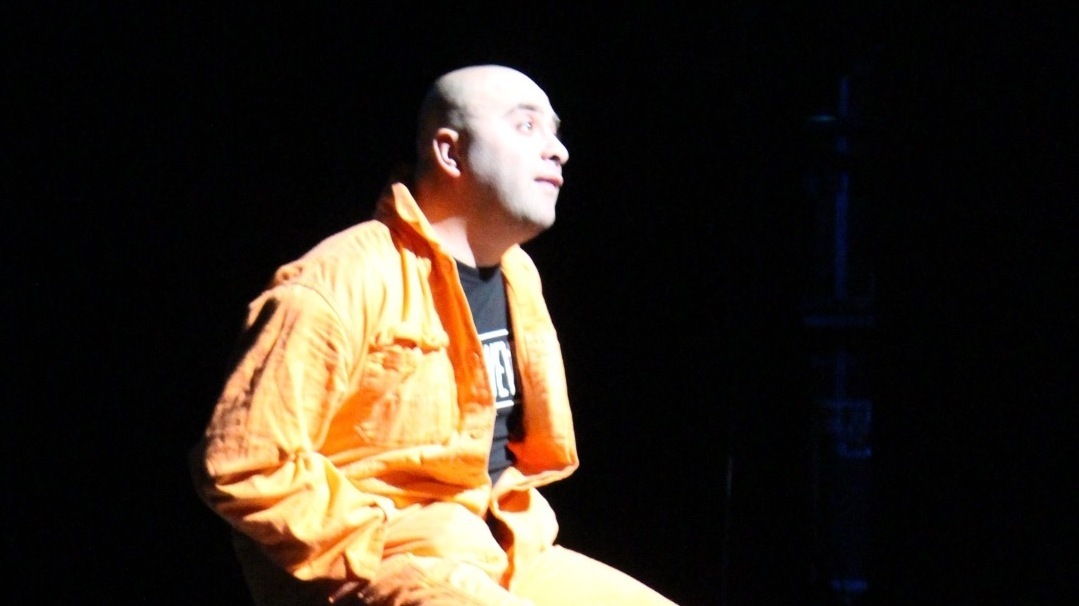 Writer/director and lead actor Ismaël Saïdi's play Dijihad is a comedy that appeals to stop radicalization.

His street cred comes not just from writing a wildly popular tragicomedy, Djihad, but from growing up in a rough neighborhood, Schaerbeek — the same one where the suicide attackers assembled their bombs and caught a taxi to the airport. He reflected later on his intense discussion with the Maris Stella students.

"I had a lot of kids who were talking about 'us' and 'the others,' " he said, with students claiming "they don't like us, they don't love us."

Saïdi says that when students get to that point in the conversation, he holds up a rhetorical mirror, telling them the "others" are a figment of extremist imaginations and manipulative Islamic State recruitment techniques. He reminds the young people they were born here, they are Belgians — and that they have to stop believing anyone who tells them they're victims.

It sounds harsh, but Saïdi says it's the only way to get through to to young people — to change this destructive thinking and end the culture of silence that allowed so many terror suspects to plot here, protected.

"You have to say the words and not be politically correct," he says. "You can't! Not with teenagers."

In Divided Belgium, Some Find That Trauma Unites Them

And at this very school, this very tragic week, a sign that at least some students understood even before the event.

Lewahert says a girl came to her and shared something chilling: That another student had expressed disappointment "only" some 30 people died in Tuesday's terror attacks. The next day, the director says, that boy was not at school.

"I thought 'where is he, what is he doing?' " Lewahert says.

Fearing he may plan some kind of attack against the school, especially against the tolerance event, she made a difficult decision. She called his parents and said the student was barred from school, and she called the police, who said they'd look into it. She reassured the frightened student, and they thanked each other.

"The hope is there!" he said. "Even if their friend is from the same religion — the rest of the school, they didn't protect him. Here is the proof if they are in a good state — if they have good teaching, they will not protect them."

Saïdi says he hopes this is how Belgian Muslims will start defining "solidarity" — a hope underscored by a personal near-miss in Tuesday's tragedy. His own son left the subway train that got bombed, just one stop earlier.