Accessibility links
Brazil Has Nearly 60,000 Murders, And It May Relax Gun Laws : Parallels Though gun violence takes a huge toll in Brazil, there's a push to relax gun laws. And many of the arguments are similar to the ones in the U.S.

At the dilapidated morgue in the northern Brazilian city of Natal, Director Marcos Brandao walks over the blood-smeared floor to where the corpses are kept.

He points out the labels attached to the bright metal doors, counting out loud. It has not been a particularly bad night, yet there are nine shooting victims in cold storage.

Most were shot with guns that were not legally owned, he says.

Almost 60,000 people were murdered in Brazil in 2014, most with guns. While some Latin American countries have higher per capita murder rates, in absolute numbers, Brazil is the deadliest place in the world outside Syria.

Brazilians are far more likely to be shot to death than Americans, a more populous country where there are about 8,000 to 9,000 gun homicides each year.

Still, a group of Brazilian congressmen wants to make guns easier to obtain, modeling their proposal on U.S. legislation.

Right now, Brazil actually has tough gun laws. If you want to own a gun legally these are the requirements:

-- proof you know how to handle a gun and shoot it

-- evidence of why you need a gun. For example, a police report of an attack against you.

Even if a prospective gun owner supplies all this information, the police can arbitrarily deny a request for a gun permit. 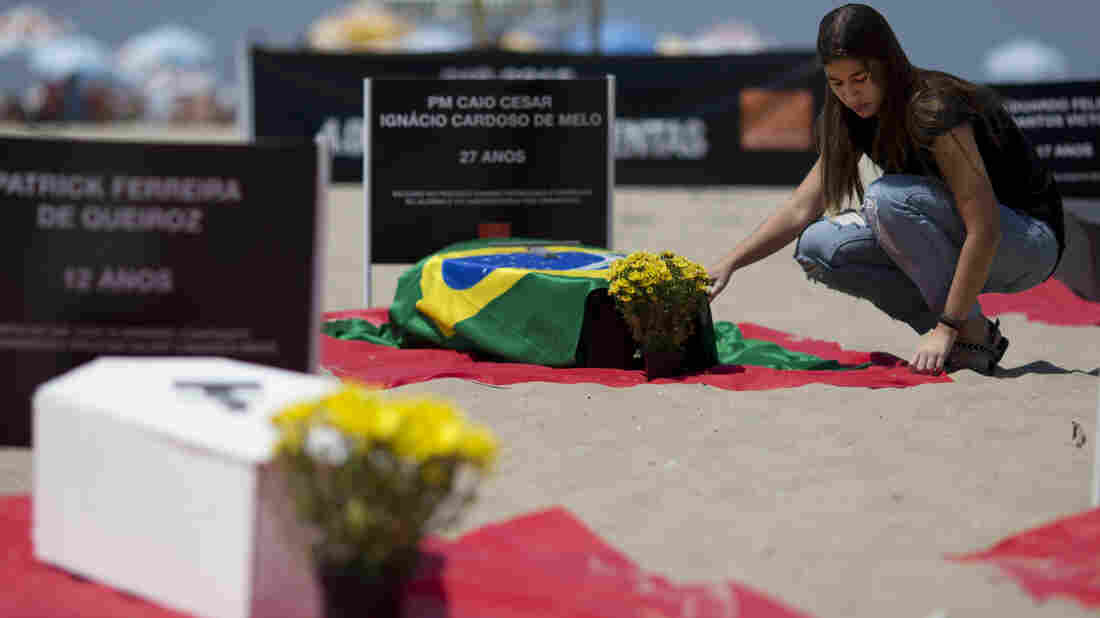 A woman places flowers on a coffin during a protest against violence in Rio de Janeiro last October. Brazil's violence is at an all-time high, with nearly 60,000 murders a year. Silvia Izquierdo/AP hide caption 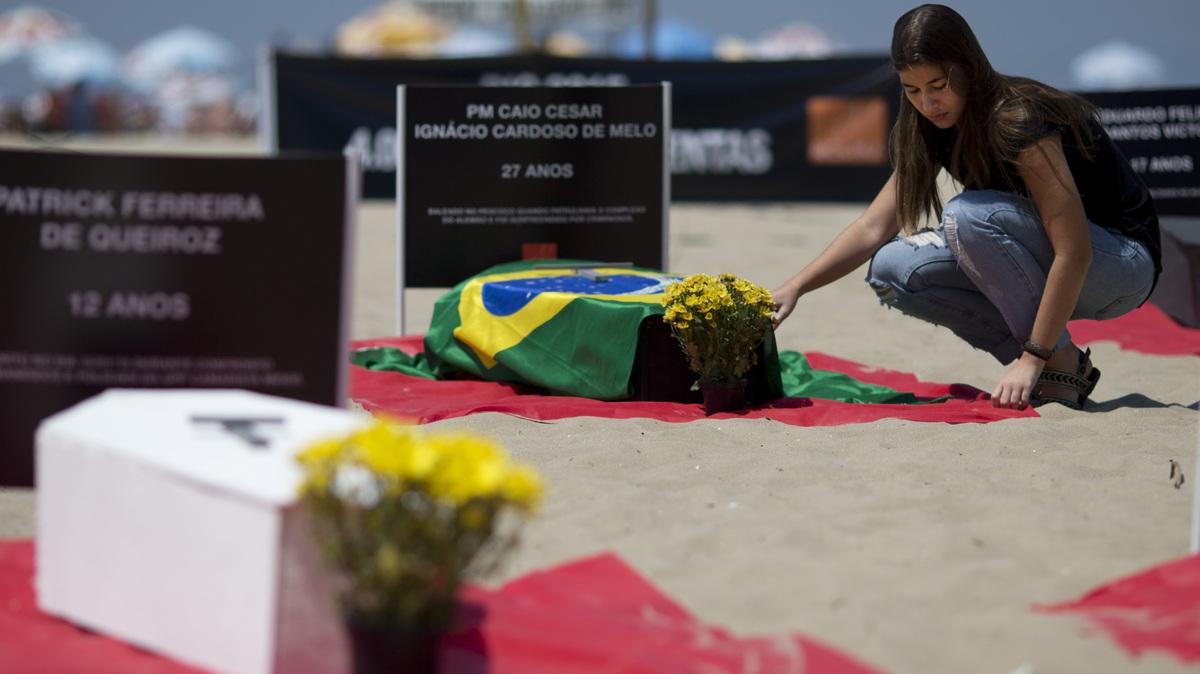 A woman places flowers on a coffin during a protest against violence in Rio de Janeiro last October. Brazil's violence is at an all-time high, with nearly 60,000 murders a year.

But Congressman Edson Moreira wants to make it easier to get guns. He is part of what's known as the "bullets, beef and Bible" caucus in Brazil's Congress, a group that is religiously conservative, supports the farming industry and favors greater access to guns.

"Brazil doesn't have a gun problem. It has a problem of illegal guns in the hands of criminals, especially drug traffickers," he says.

His group is trying to relax the ability of the police to decide who gets a weapon. "The idea is to return to the public the right to own a gun or not," he says.

His argument is one familiar to Americans: If the "bad guys" have guns, the "good guys" should be allowed to have them as well to protect themselves.

Indeed, Moreira says he is inspired by America's gun laws.

"The U.S.A. has the perfect legislation in the Second Amendment, which guarantees the population the right to bear arms," he says.

The U.S. National Rifle Association has been involved in past gun control debates here and it's clear many of the arguments used in Brazil are similar to those used by the American gun lobby.

Fabrício Rebelo, with the Research Center on Law and Security, which wants to ease gun laws, denies that Brazil is modeling itself on the U.S.

"The proposed change in the law here would still mean Brazil would have very strict gun control laws unlike the more relaxed [gun] market in North America," he says.

Still, gun control advocates say the basic argument of gun rights groups here is flawed because the people who are arguing for greater access to guns don't account for most of the victims.

"We are seeing a massacre of our young population. We don't call it that because it doesn't happen as it does in a war where you see all the bodies piled up at once," Ataide says.

"It's a massacre by drops. One day one young person, tomorrow another. It's almost the mass extermination of a population," he adds. "White Brazil is seeing fewer homicides. Violence is going down there. But black Brazil is seeing an explosion of violence."

Ivan Marques, the director of Sou da Paz Institute, which focuses on disarming the population, agrees.

He says more guns will simply mean more black deaths. But instead of trying to address that problem, legislators are intent on further arming the population.

He says the solution is better policing and better governance in poor communities.

What both sides agree on is that something needs to be done. A new study shows that 10 percent of all the murders worldwide now happen in Brazil.