Accessibility links
In Russia, The Oil Price Drop Hits Putin's Base Hard : Parallels Retirees and those aspiring to join the middle class are struggling to make ends meet as the value of the ruble has fallen along with world oil prices. But Putin's government is doing little to help. 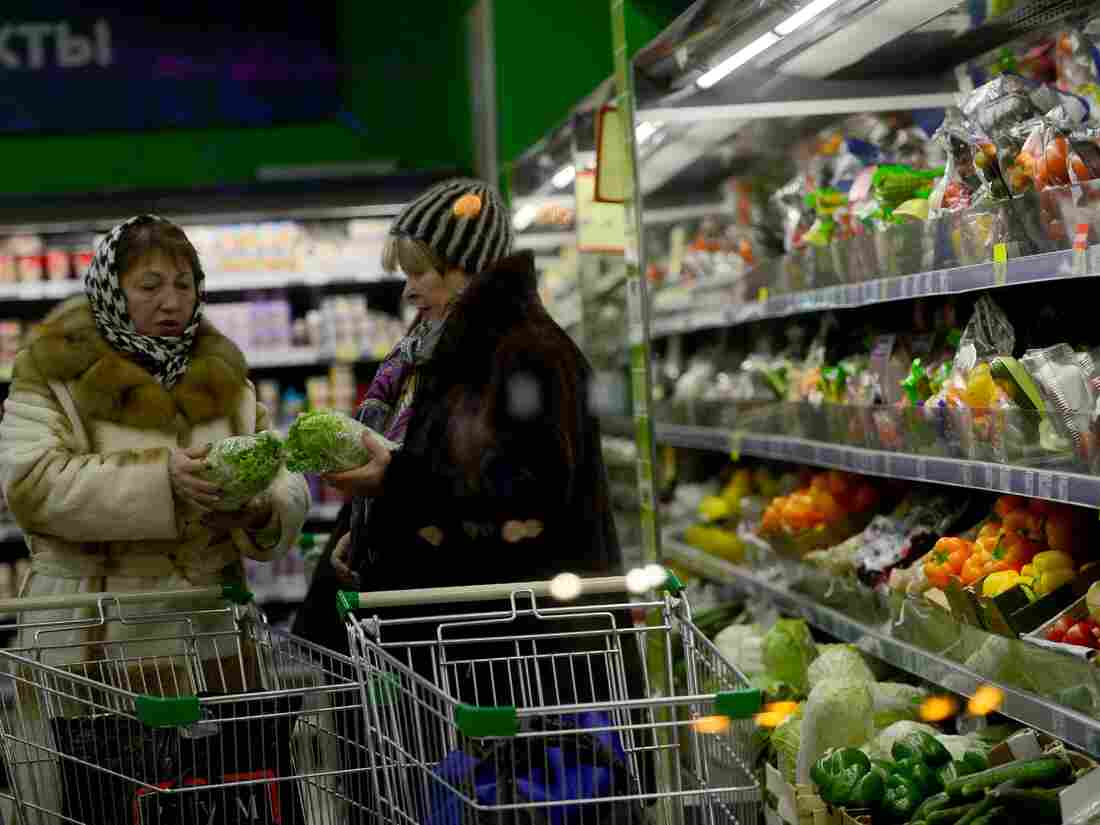 About 40 percent of Russia's food is imported. As the value of the ruble has declined, prices at grocery stores have risen. Anadolu Agency/Getty Images hide caption 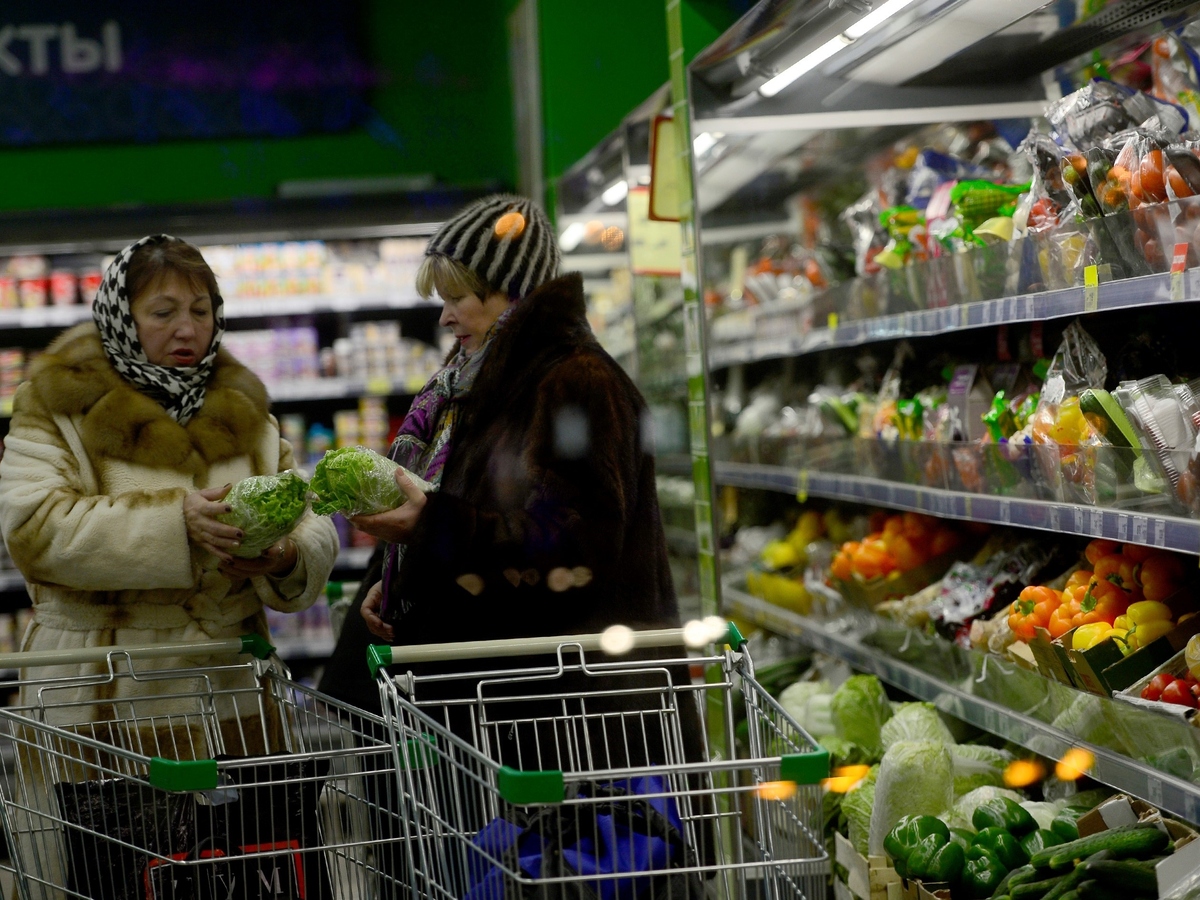 About 40 percent of Russia's food is imported. As the value of the ruble has declined, prices at grocery stores have risen.

The drop in world oil prices is still biting hard at Russia's economy. As oil has collapsed, so has the value of the ruble. And the people who've been hit hardest — pensioners and people who aspire to join the middle class — are groups that are important to President Vladimir Putin's political base.

For many Russians, the symbol of entering the middle class was the ability to buy a house or apartment. In the growing prosperity of the mid-2000s, people began taking mortgage loans to make that possible, and home sales took off.

Today, some buyers who were part of that boom are struggling and have been staging rallies in the streets of Moscow, calling on the government to help with their mortgages.

Dmitry Novikov, a 33-year-old electrical engineer, says he and his wife are in trouble.

"We have a loan of $84,000 from the bank," he says, "and now our payments are around twice what they used to be. In the future, it might take my whole salary and more," he says.

The Novikovs are part of an emerging Russian middle class who saw a vote for Putin as a vote for prosperity that would allow them to move up in the world. And the fact that they're willing to take to the streets to protest suggests they want to hold the government to that assurance.

The reason their payments are so high is that many took out mortgages in dollars, but their salaries are in rubles. Since oil prices crashed in the summer of 2014, the ruble lost around half its value, from 35 rubles to the dollar to 67 rubles today.

Dmitry's wife, Zarina, who's 27 and works as a pet groomer, says the bank forced them take a dollar-denominated mortgage.

"We were told that we weren't qualified for a loan in rubles because our salaries weren't big enough," she says. 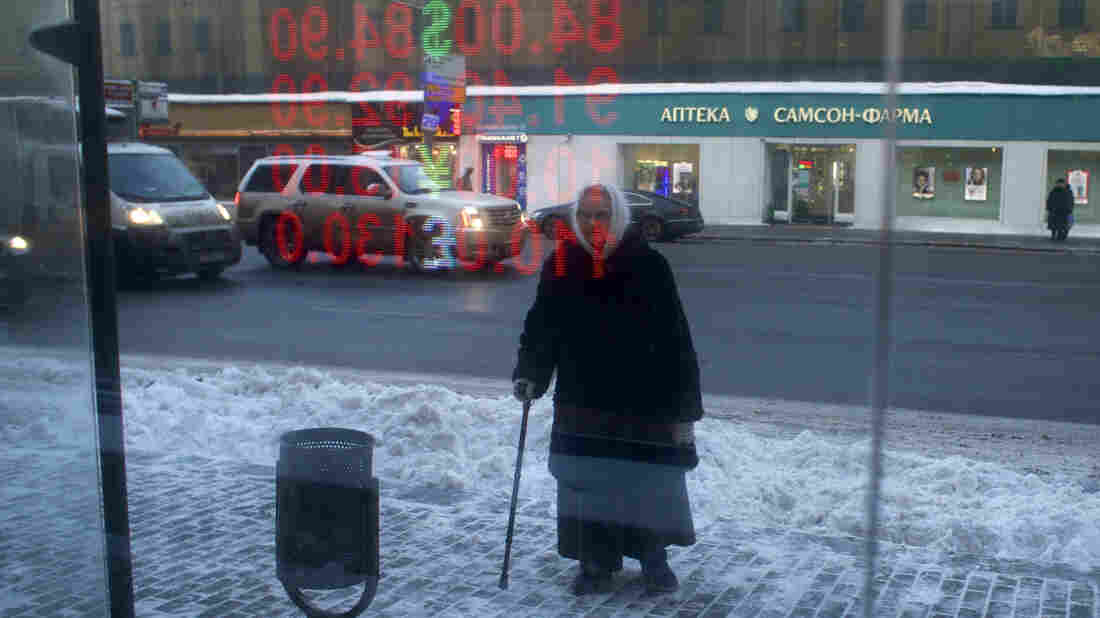 An elderly Russian woman stands at a bus stop with exchange rates reflecting in glass in Moscow on Jan. 21. As the ruble declines and oil prices continue to slide, pensioners are among the hardest hit. Ivan Sekretarev/AP hide caption 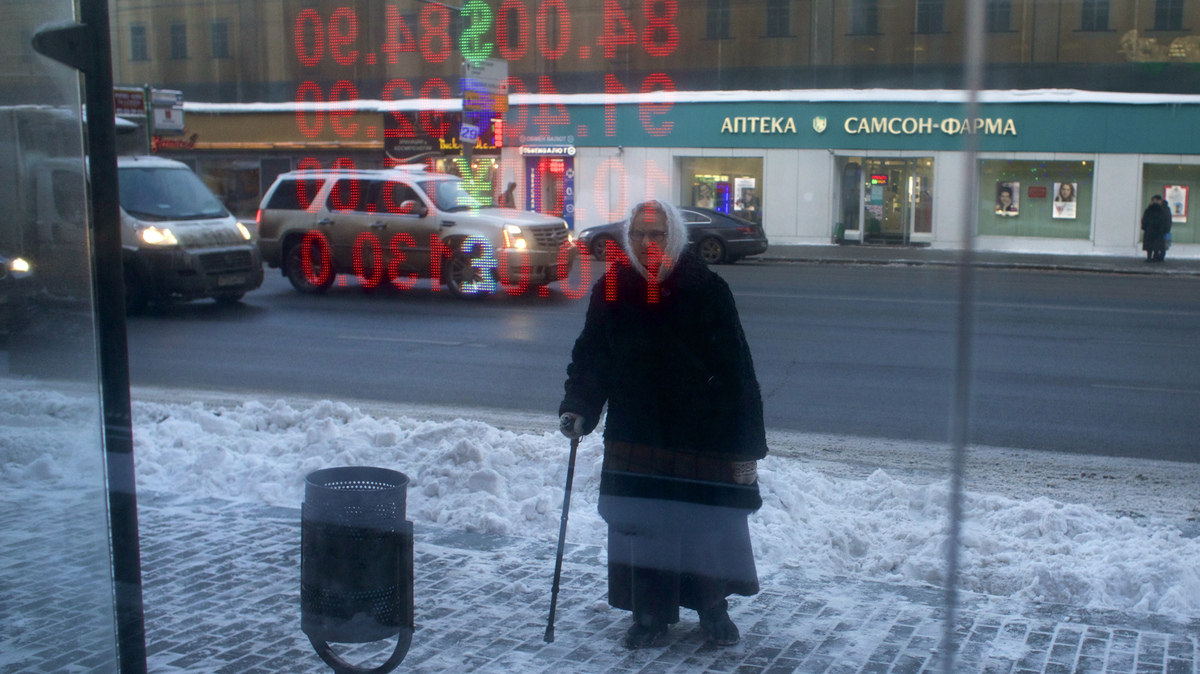 An elderly Russian woman stands at a bus stop with exchange rates reflecting in glass in Moscow on Jan. 21. As the ruble declines and oil prices continue to slide, pensioners are among the hardest hit.

Bankers assured them that the economy was stable, she says, so their dollar payments would never go up. Now the couple says they're in danger of losing the modest apartment that they've worked for years to buy.

Economist Vasily Solodkov, a banking professor at Moscow's Higher School of Economics, doubts that homebuyers were forced into dollar mortgages — and says in fact they were motivated by relatively low interest rates, of around 7 percent on dollar mortgages compared with 13 to 18 percent on loans in rubles.

Still, frustrated homebuyers like the Novikovs say the government should help them. Zarina argues that the government gave interest-rate breaks to newly minted Russian citizens in Crimea after the region was annexed from Ukraine two years ago. "We would like the same attitude toward us," she says.

So far, the Russian government has declined to help, contending that buyers gambled and lost when they chose mortgages in foreign currencies.

Even if the government wanted to help, the financial crisis could make that impossible. Early this year, the Kremlin announced an across-the-board budget cut of 10 percent, sparing only the defense and security ministries.

In February, it was announced that even the military would face a 5 percent cut.

Meanwhile, the combination of a weaker ruble plus inflation is hitting hardest at another important segment of Putin's political base — retired people.

Solodkov points out that many consumer goods in Russia are imported, including as much as 40 percent of the nation's food. When the ruble loses value, prices at the grocery store rise.

"Take a pensioner whose pension was worth 500 U.S. dollars per month," he says. "Now it has become about $300, and prices [were] raised the same way as the exchange rate, so it's really a problem for those people."

Zinaida Kucherskaya, a 75-year-old whose pension buying power has fallen by almost half in the past two years, is one of those affected.

"My pension's not very big," she says. "We pay for the apartment and maybe something extra."

That something is food, and Kucherskaya says she's had to stop buying a lot of things — meat, milk and cheese — because they're just too expensive. Even for staples like potatoes, Kucherskaya has to shop carefully.

"You can see I walk with a cane," she says, "but I go from store to store to find what I need at a cheaper price."

Kucherskaya comes from a generation that has seen worse times than this, though. For now, she's not complaining.