Accessibility links
'It Was Torture': An Abu Ghraib Interrogator Acknowledges 'Horrible Mistakes' : Parallels The techniques Eric Fair used still weigh on his conscience. "There is no middle ground," he says. "Torture is an enhanced interrogation." His new memoir is Consequence. 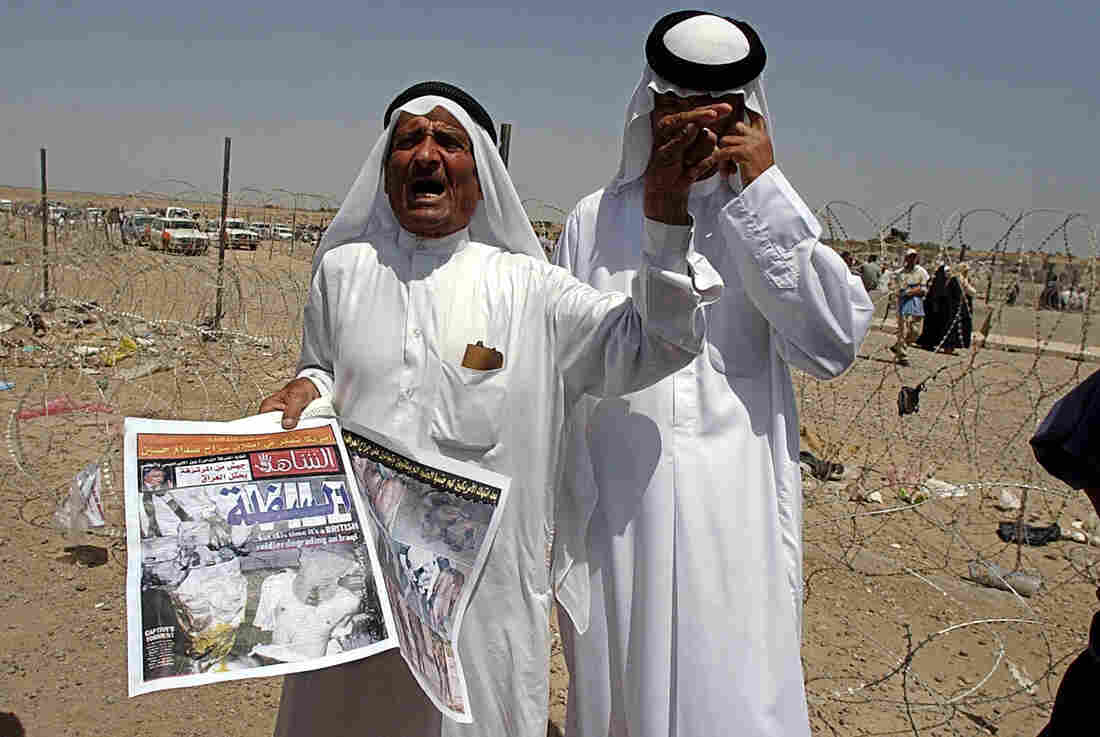 Relatives of Iraqi prisoners being held at Abu Ghraib denounce detainee treatment as they hold local newspapers featuring photos of U.S. soldiers abusing the prisoners inside the jail in May 2004. Roberto Schmidt/AFP/Getty Images hide caption 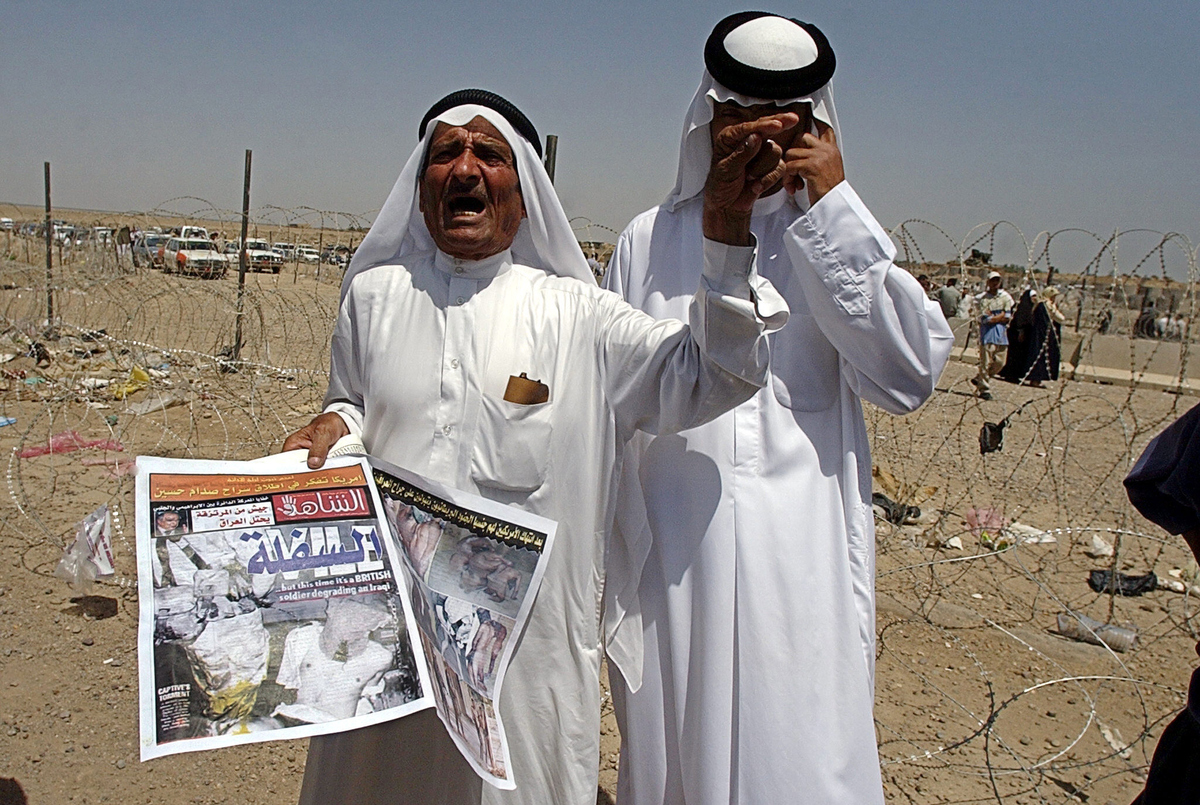 Relatives of Iraqi prisoners being held at Abu Ghraib denounce detainee treatment as they hold local newspapers featuring photos of U.S. soldiers abusing the prisoners inside the jail in May 2004.

Editor's note: The following interview contains descriptions that some may find disturbing.

Forget "enhanced interrogation techniques" — Eric Fair says what he did as an interrogator in Abu Ghraib prison in Iraq was torture. 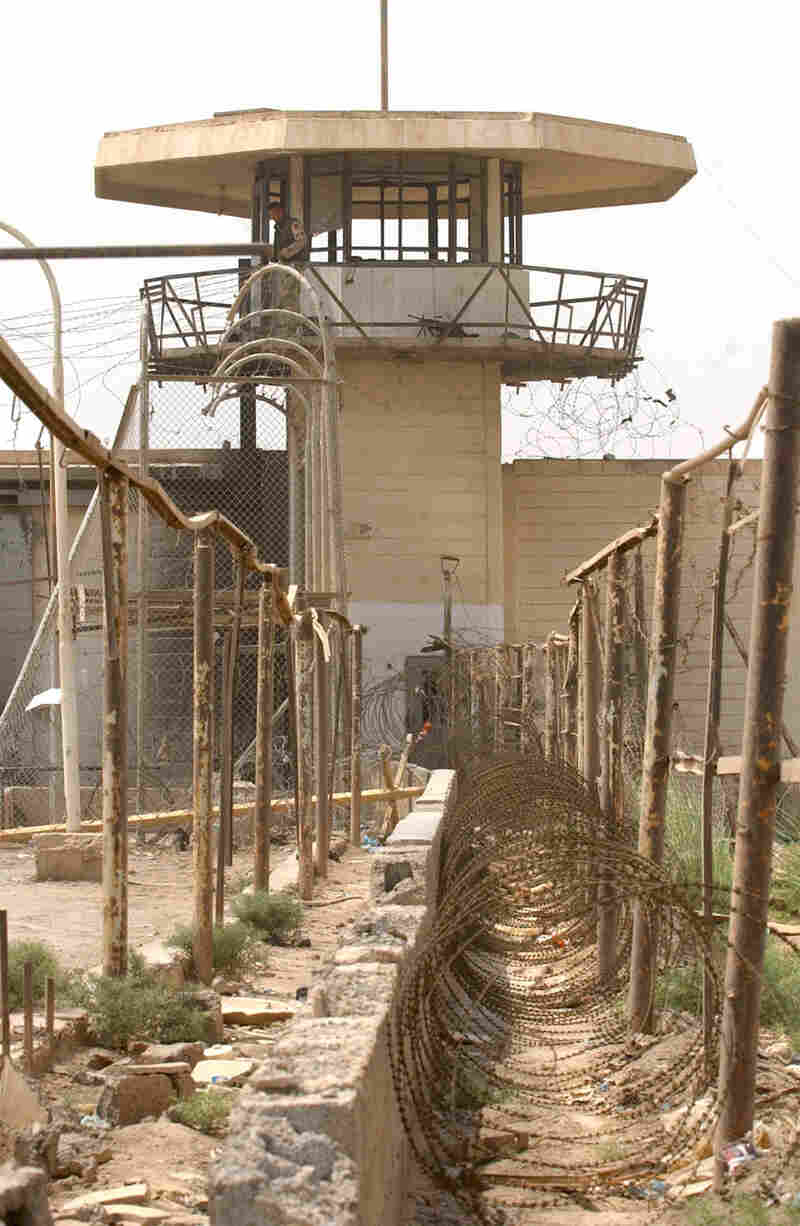 "Abu Ghraib was smack dab in the middle of the war zone ..." explains Eric Fair, a former interrogator. "The people that were being brought in were, in many ways, directly responsible for the mortar fire and the sniper fire that was coming in. ... It was a terrible idea on every level." Wally Santana/AP hide caption 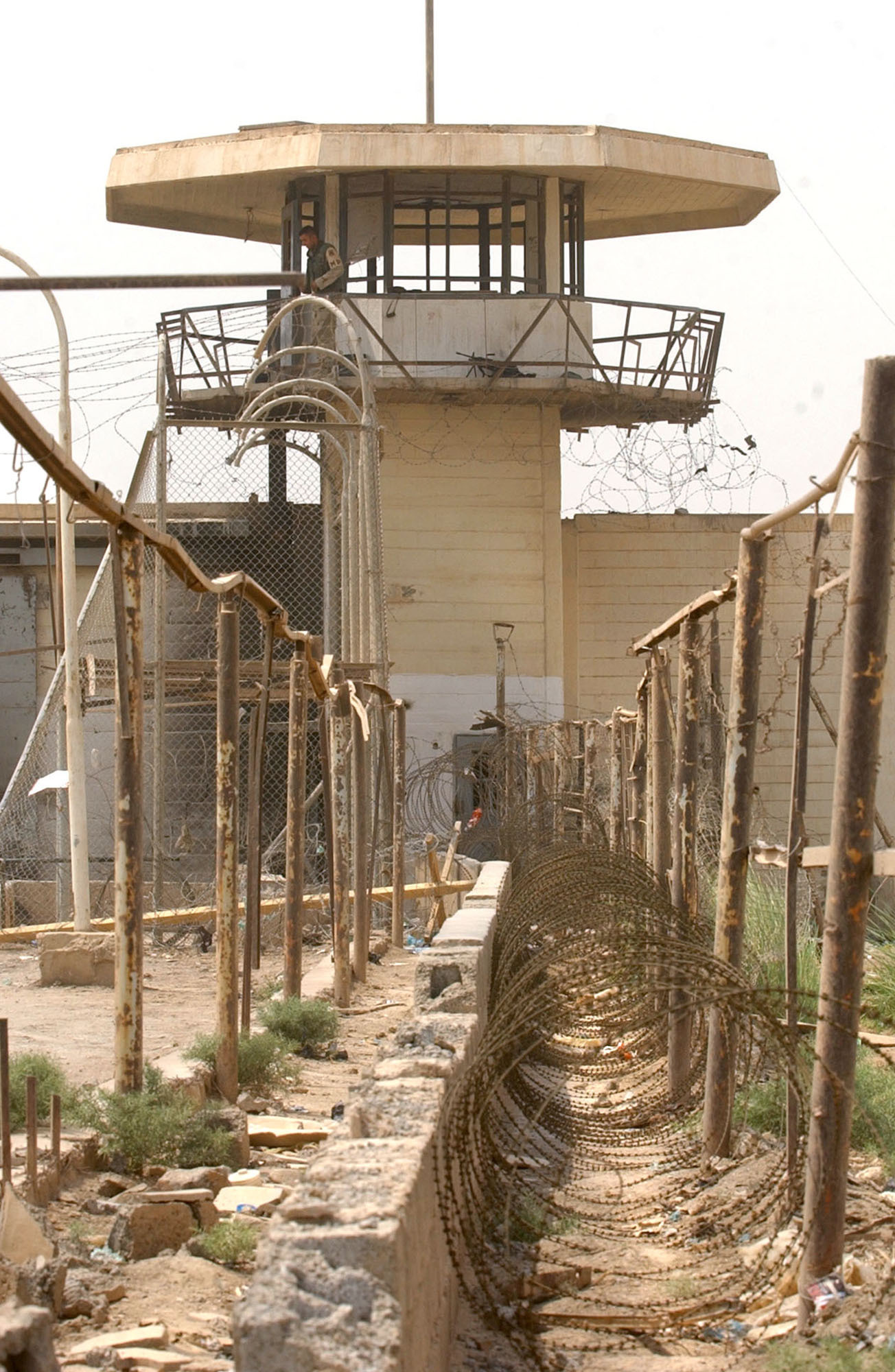 "Abu Ghraib was smack dab in the middle of the war zone ..." explains Eric Fair, a former interrogator. "The people that were being brought in were, in many ways, directly responsible for the mortar fire and the sniper fire that was coming in. ... It was a terrible idea on every level."

The techniques Fair used were considered legal by the U.S. government, but what he did still weighs on his conscience. Though he says he didn't practice any of the worst abuses, he used stress positions and sleep deprivation, and he now deeply regrets it. He describes the emotional and mental toll of his actions in his new memoir, Consequence.

"We hurt people, and not just physically," he says. "We destroyed them emotionally, and ... I think at the very least it's a just punishment for us that we suffer some of those consequences, too."

Fair worked as an interrogator in Abu Ghraib and Fallujah, employed by a private company under contract to the military. He had previously served in the military and worked as a police officer in his hometown of Bethlehem, Pa.

After working as an interrogator, he returned to Iraq as an intelligence analyst for the NSA. He says what he did during his time in Abu Ghraib and Fallujah was abhorrent.

"My behavior towards Iraqi detainees did not meet the standard that I had simply been raised on," he says. "It was not the way that I should've behaved. There are long discussions about why those things happened ... and how difficult it was to sort of break from those expectations of being a soldier — but none of that matters. I made horrible mistakes. ... I have a responsibility to confess those things openly." 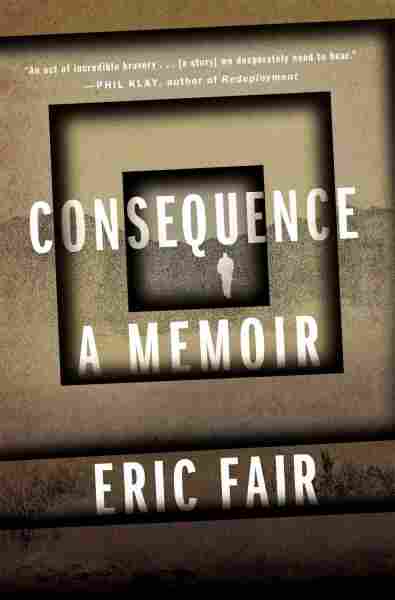 On his first impressions of Abu Ghraib prison

I think it was difficult to be surprised, because there were so few expectations about what we were getting into. None of us had been to war. There were a few — some of the older gentlemen — may have seen action in the first Gulf War, but on a very limited basis. We certainly had never done anything like staff a large-scale prison in the middle of a combat zone.

The first thing that may have seemed abnormal was that we were housed in old prison cells. And so Abu Ghraib is an enormous prison complex with quite a few buildings. And one of the buildings that had housed Iraqi prisoners during the days of Saddam Hussein had been emptied out, and we were led to a cell with actual bars on the door, and that's where we lived. There was a sense, I think, from the beginning that we were almost going to make it up as we went along.

On what he was ordered to find out from prisoners

It varied a great deal. There were prisoners who certainly came in with large packets with a lot of background information about who they'd been during the Saddam [Hussein] regime — who their associates were — and there were others who came in with almost nothing.

A common phrase that we became familiar with was, "detainee was suspected of anti-coalition activities," and that was literally all they would come in with. There were what were known as PIRs ... which stands for "Priority Intelligence Requirement." ...

On the techniques he used at Abu Ghraib

There's the whole debate about the difference between "enhanced interrogation" and torture and where's the division? For me, the stress positions that we used were in many ways based on the kind of stress positions that we had gone through in basic training — whether it was being in the push-up position for a certain amount of time, or holding your arms out to your side with books in them, until you essentially achieved muscle failure. The idea was to exhaust someone. These were the techniques that I was most familiar with and that I used. ...

Again, there was never a point at which I thought I knew I had crossed a line. I think I knew that we were being aggressive and there was a certain confusion around why we're doing this, but as a prior enlisted soldier, the expectation was that you completed your job and you completed your mission, and these were necessary tools in that mission.

I would not suggest that I used them frequently, but I think that even by sort of dipping my toes into that puddle, I essentially went sort of swimming in that pool of depravity.

On the "Palestinian Chair"

When I arrived in Fallujah there was a small chair, about 2 feet tall, made of plywood and two by fours, and it had plastic zip ties used to secure someone's hands on the bottom. The Palestinian Chair was intended to put someone in a crouched position from which they could not recover and forced all their weight onto their thighs and their calves and they stayed there for as long as an interrogator decided they were going to stay. ... 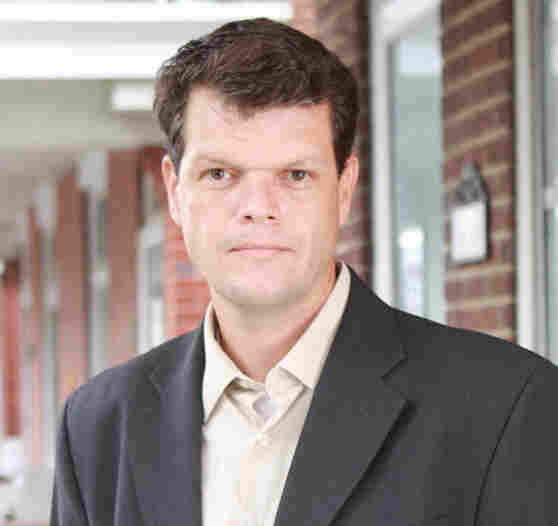 Fair served in the military and worked as a police officer before becoming an interrogator in Abu Ghraib and Fallujah. He later returned to Iraq as an intelligence analyst for the NSA. Amy Cramer/Henry Holt and Co. hide caption 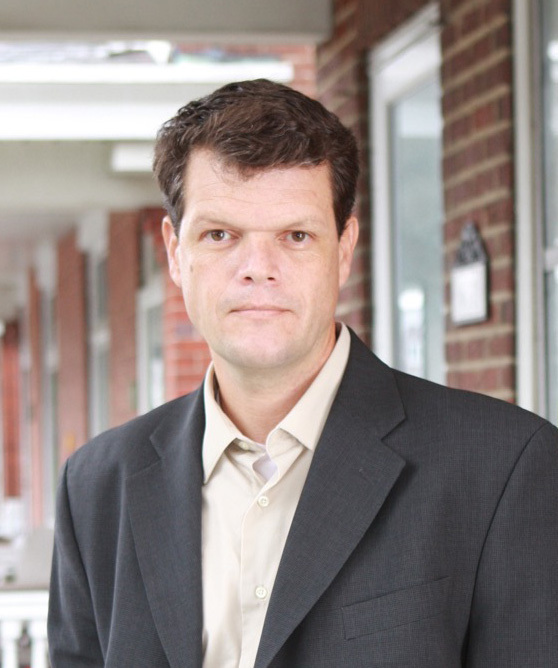 Fair served in the military and worked as a police officer before becoming an interrogator in Abu Ghraib and Fallujah. He later returned to Iraq as an intelligence analyst for the NSA.

A close friend of mine and I did lock ourselves into the Palestinian Chair at one point to get a sense for what it was. We both lasted less than about a minute. ... I did not [use it on anyone]; I did witness its use near the end of my stay in Fallujah. I had walked past the door of an interrogation room which was open and I witnessed one of the prisoners in the Palestinian Chair.

This is the point ... where I recognized that I had gone to a place that I wasn't coming back from, that there was no way to suggest that that kind of treatment of another human being wasn't abusive and that it wasn't torture.

On the severe interrogation techniques used at the "hard site," where the most-high-value detainees were kept

Nudity was sort of the theme of the entire prison. The number of Iraqis that were naked was shocking, and it was cold. Iraq certainly gets hot in the summer, everyone knows that, but it also gets very cold in the winter. This was December. Sleep deprivation and forced standing were the most common thing that most prisoners were suffering. They were handcuffed to the cell walls in a position in which they were standing, their hands were placed down between their legs, and then their hands were handcuffed back behind them, which ... denies you the opportunity to sit down or to rest, and so you can combine what were essentially two enhanced techniques — sleep deprivation and forced standing. It was a shock to the system.

On why he didn't speak out at the time

I think the natural and very fair question is: Why I didn't say something or why I didn't quit? As a contractor I could've quit at any point. But again, the desire that had been sort of drilled into me to stay committed to things in the United States Army, these were my comrades, whether they were contractors or whether they were soldiers, I knew the uniforms, I knew the ranks. ... At least at that point I still supported the invasion and the war effort, so I felt that I had an obligation to be a part of it. There was a recognition that certainly war was going to be ugly and I think I did my best to justify what was going on.

On his response when the story of prisoner abuse at Abu Ghraib broke in the U.S.

I and some of my close friends ... were shocked by how shocked the American people were. We were not implementing enhanced interrogation techniques and torture behind closed doors. We weren't doing this and then going back to our bunks at night and suggesting "I hope no one ever finds out about this" or "Don't tell anyone." This was part of what we viewed as an authorized program.

Now, there are all sorts of different opinions about exactly what was authorized and who was authorizing it — that's for someone else to decide — but as interrogators none of us thought that we were doing anything wrong. There might've been a sense that were doing something morally wrong, but legally wrong, no.

On how he defines torture

I want to be careful about different levels of torture, because this is what allows someone like Donald Trump to suggest that waterboarding is not torture and "so much worse" is not torture, that we can just change the legal definition. You could bring six lawyers in here and you could get six different opinions about what is torture. I think that the minute you violate another human being's will, as Americans, we have an obligation to call that torture.

I refuse to suggest that torture is successful on any level. And I'm not sure that it matters; it shouldn't matter to anyone in this country. I'm not sure why we've gotten to this point where we start to talk about the effectiveness of torture, as if that makes any difference whatsoever.

Read an excerpt of Consequence