Accessibility links
She's Lost 2 Daughters To ISIS; Will Her Younger Girls Be Next? : Parallels A Tunisian mother says poverty and a lack of education and opportunity drove her older daughters to join ISIS. Without help, she fears that her younger girls will become "two little bombs." 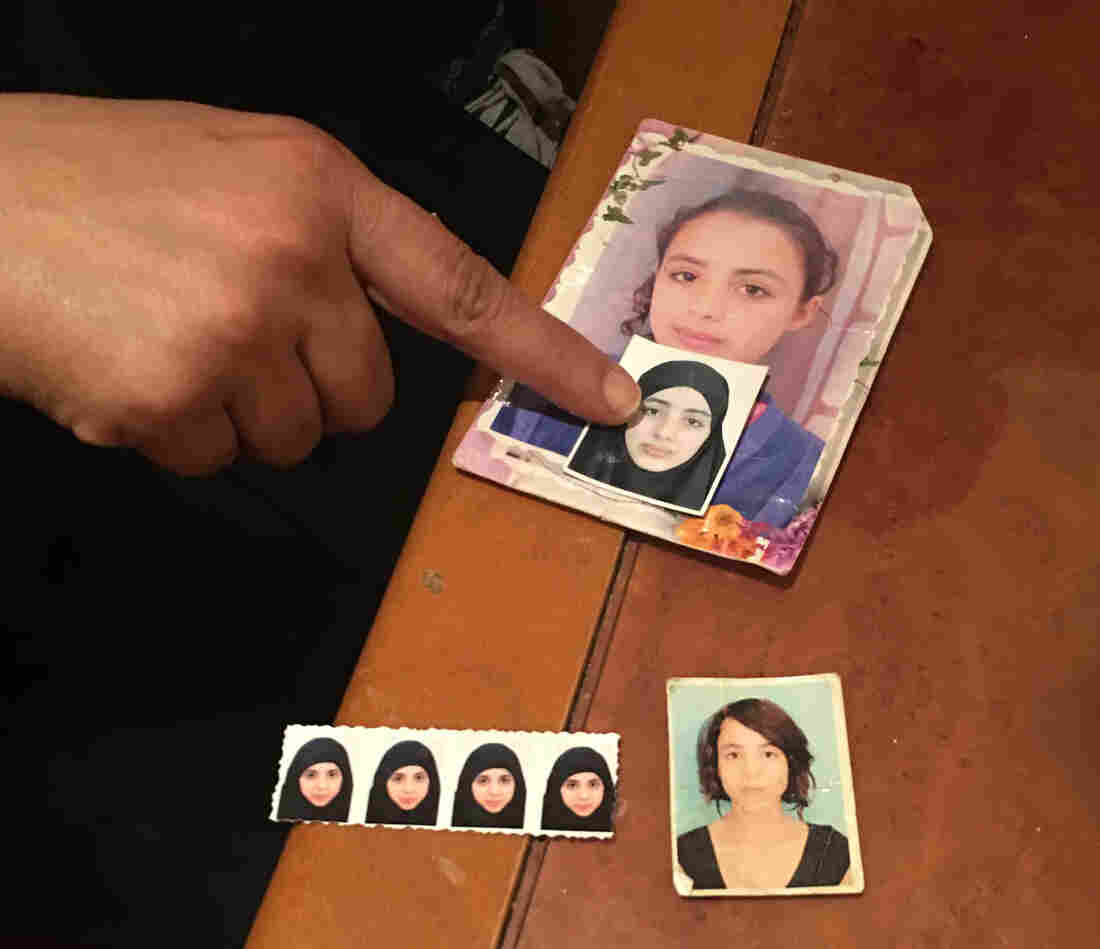 Tunisian Olfa Hamrouni points at pictures of her daughters Rahma (above) and Ghofran. The teenage girls were exploited by extremist recruits and left their homeland to join ISIS in neighboring Libya. Leila Fadel/NPR hide caption 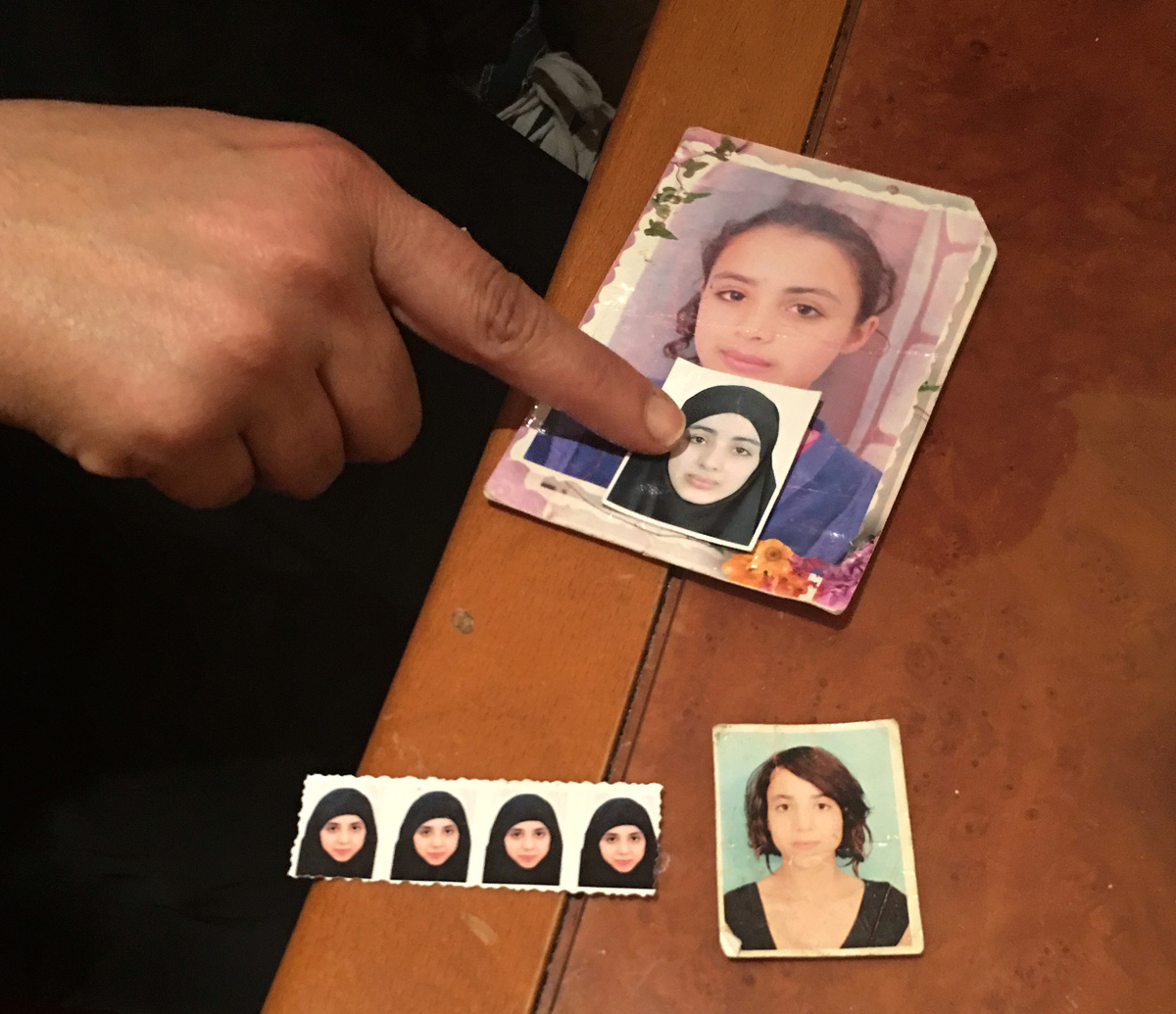 Tunisian Olfa Hamrouni points at pictures of her daughters Rahma (above) and Ghofran. The teenage girls were exploited by extremist recruits and left their homeland to join ISIS in neighboring Libya.

Olfa Hamrouni sits in a café in central Tunis and recounts how she lost her two oldest daughters to ISIS.

Their story starts — as many stories about teenagers do — with a mother's attempt to curb her children's behavior. The older girls were getting a little rebellious, playing wild music and wearing skull-and-bones T-shirts. They'd been acting out, she says, since their father left the family with no money and no support.

"After the divorce, the two girls were lost. They didn't know what to do. My oldest girl, Ghofran, she was looking for a reason to live," she says.

Hamrouni confesses she wasn't the best parent. She hit the girls, taking out the pain of the divorce on them. And she had no money to support them.

She realized none of them was coping well, so she was happy when four years ago, the oldest girls sought guidance from a religious group that proselytized from a tent in their impoverished neighborhood. Maybe faith could help them.

"In 2012, we'd never even heard of ISIS," she says. "I thought my girls were just learning from a local preacher at a prayer tent."

Hamrouni is devout, but her daughters' beliefs started to scare her. They were scolding their mother about television and music in the house, saying it was forbidden. Their preacher was telling them they should fight and die in places like Syria, and they didn't know enough about their faith to know any better.

"They just knew to pray and to fast in Ramadan," their mother says.

So, she says, they were vulnerable to extremists distorting Islam — young, uneducated, poor and forgotten. 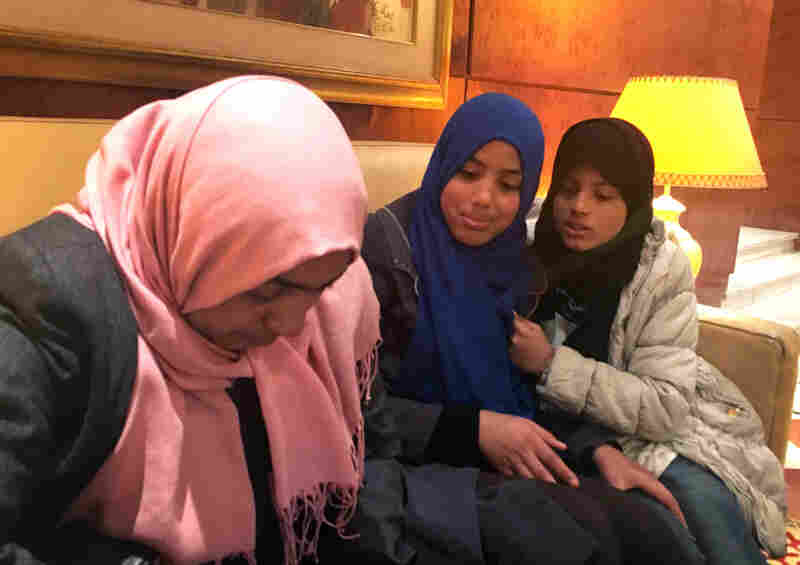 Taysir Sheikhawi, 11 (right), and her sister Aya, 13, look on as their mother, Olfa Hamrouni, pulls out pictures of their two older sisters, who joined ISIS. Leila Fadel/NPR hide caption

Two years later, Ghofran, then 16, ran away. Hamrouni knew she left to join ISIS because the girl had been talking about it at home. She and her 15-year-old sister, Rahma, were communicating with jihadists on Facebook and were open about pledging allegiance to ISIS.

Hamrouni tried to save Rahma by turning her in to the police. But they released her, and soon she ran away, too. Both girls had joined ISIS in neighboring Libya, where the group has become increasingly powerful.

They are not alone. Tunisia is a country known for its relative stability and path to democracy at a time when the region is roiling in chaos. But it is also among the biggest exporters of fighters to groups like ISIS.

More than 5,000 Tunisians have joined militant groups abroad, according to a U.N. working group estimate. The government says it has stopped some 16,000 others from leaving the country. Many are joining ISIS next door, in the security vacuum of Libya — just like Hamrouni's teenage girls.

In February, Rahma sent her mother a shocking text message.

"I'm in Sabratha, it's very dangerous ... pray for me to be a martyr," the message read.

There had just been a U.S. airstrike on the Libyan town of Sabratha. The target was Noureddine Chouchane, her daughter's husband, a Tunisian ISIS operative believed to be the mastermind of two attacks on Western tourists in Tunisia last year. He and more than 40 others were killed in the airstrike.

Rahma followed her text message with a phone call.

"It was the first time I heard her cry. I felt she wanted to leave them and that she was afraid," her mother says.

But Rahma refused to come home and warned her mother that ISIS would be in Tunisia soon. Sure enough, a few days later, a group of mostly Tunisian ISIS gunmen tried to take over a Tunisian border town near Libya. The ISIS fighters were beaten back, but there's a widespread belief that more such attacks are likely.

Now Rahma and Ghofran are under arrest in Libya by anti-ISIS forces . They're being held in Tripoli, the capital, according to a spokesman for the force.

Hamrouni doesn't know if she'll be able to see them again or meet the baby one of them now has. She has appeared on local TV asking for help from the Tunisian government to get her girls back and help protect her remaining children.

"I can't do this alone. I'm poor," she said. "I can't afford a psychologist, school and books. I can't afford to give my kids a life or religious education. That's why this happened. The government has to help."

Her younger girls sit next to her.

Taysir, a fresh-faced girl who looks younger than her 11 years, is confused. She says her older sister showed her videos on how to load a Kalashnikov rifle and of a child fitted out with an explosive belt to kill so-called unbelievers and go to heaven.

I ask if she really believes that that's Islam.

Taysir wears tight jeans and a black scarf around her hair. She giggles a lot, burying her face in her sister Aya's side when she gets shy.

Aya, 13, is depressed and has tried to take her own life more than once. Usually, she spends her nights in a city shelter for orphaned or poor girls.

She says she knows now that ISIS is bad, but she does wonder if the group's promises of heaven through martyrdom could give her things she's never had — like toys and her own room.

"For 13 years, people have told me things will get better, but they don't get better," she says. "My life is terrible. I have nothing."

Her mom shakes her head.

"I want them to know this is wrong in their mind. They're brainwashed," she says.

She blames poverty for turning her two older daughters into extremists. And she blames poverty for confusing her younger two. But she also blames the state for failing to help her before it was too late for her girls. There are thousands of other families dealing with the same thing. But they're afraid to talk, afraid to be labeled a terrorist family.

Since speaking publicly about her family, Hamrouni has lost work as a housekeeper. And without money and access to mental health care, she doesn't know what to do.

"If I die," Hamrouni says, "I leave behind two little bombs."