Accessibility links
Spain Debates: Is It Time To Scrap The Siesta? : Parallels Spain's prime minister says it's time to end the midafternoon break and move to a more 9-to-5 workday. But many Spaniards say the siesta is an outdated stereotype that's no longer part of daily life. 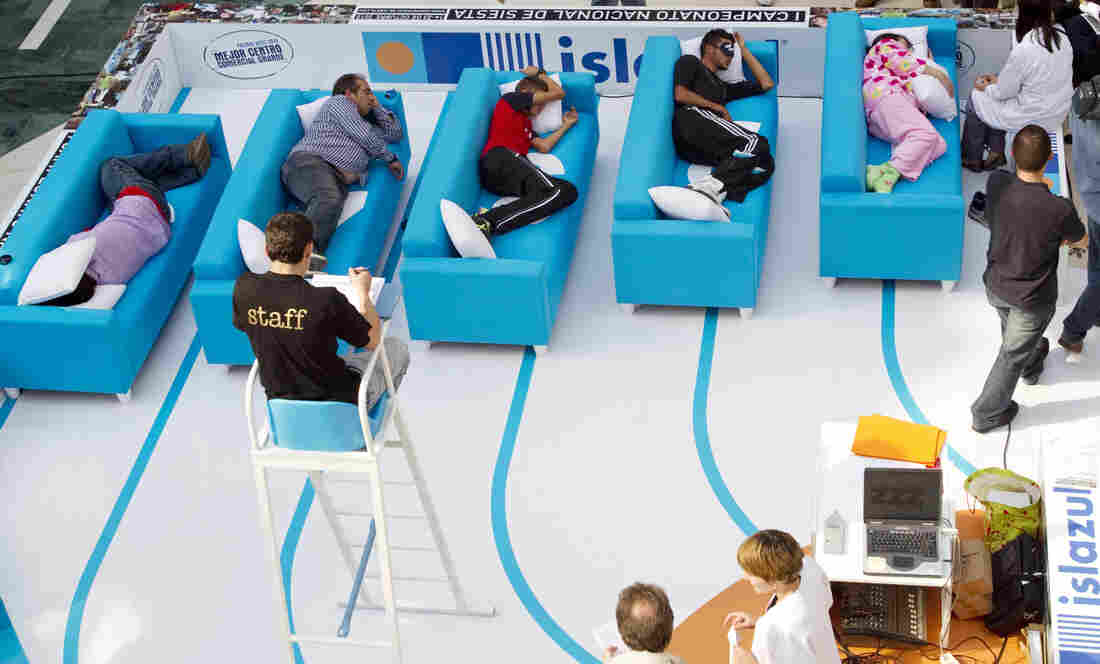 A judge watches contestants sleep during the Siesta Championship in Madrid in 2010. Prime Minster Mariano Rajoy said it's time to end the afternoon break. Many Spaniards call it an outdated stereotype and have been annoyed with the way the foreign media has reported it. Paul White/AP hide caption 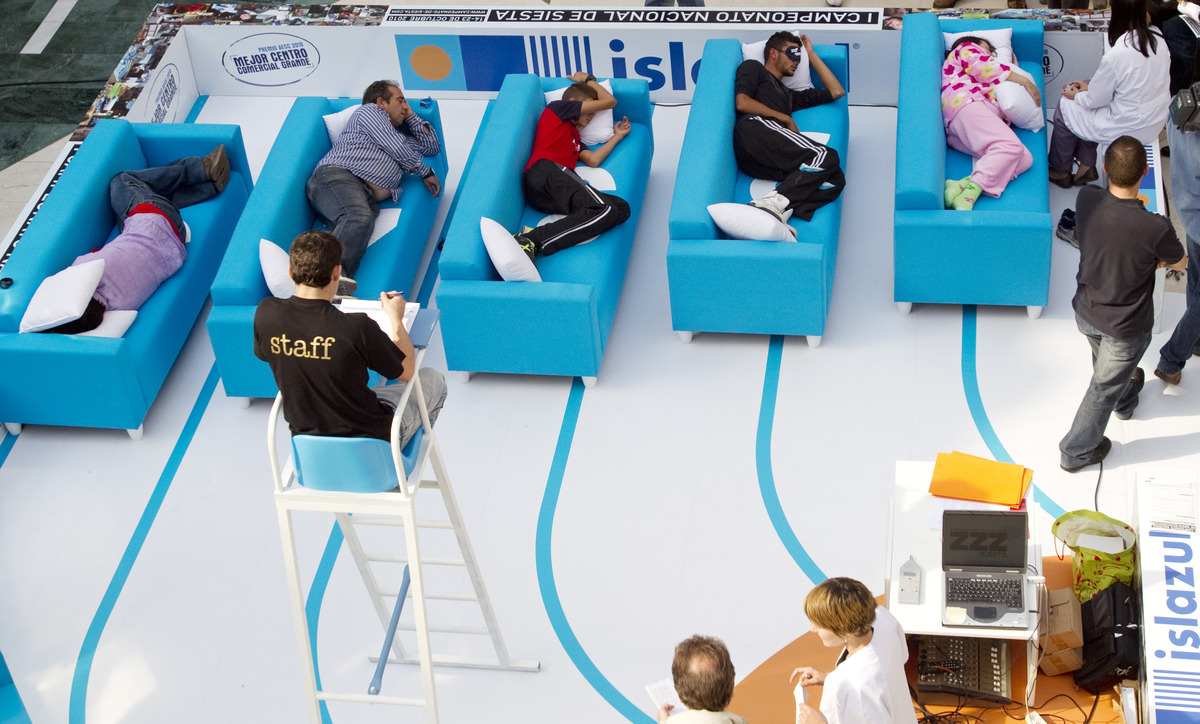 A judge watches contestants sleep during the Siesta Championship in Madrid in 2010. Prime Minster Mariano Rajoy said it's time to end the afternoon break. Many Spaniards call it an outdated stereotype and have been annoyed with the way the foreign media has reported it.

Every day at 2 p.m., Antonio Davila rolls the metal shutters down over the front of his computer repair shop in central Madrid. He heads home for lunch, picks up his kids at school — and then goes back to work from 5 to 9 p.m. He's originally from Peru, and says Spanish hours took some getting used to.

"The sun sets later here, and that affects people's habits," Davila says. "I open my shop around 10:30 a.m., close in the afternoon, and then stay open later at night."

His schedule is typical for most small retailers in Spain, where the sun does set later — ever since the military dictator Francisco Franco moved the clocks ahead one hour, to put the country on Central European Time, during World War II, in solidarity with Nazi Germany. And the midafternoon break made sense when Spain was mostly agricultural, and it was too hot to work outdoors.

"I will find a consensus to make sure the working day ends at 6 p.m.," Rajoy told a party conference Saturday in Seville.

He proposed scrapping the midafternoon break and changing Spain's time zone back to match that of Britain, Portugal and Morocco, countries on roughly the same longitude.

Rajoy's speech barely made news inside Spain. Spanish lawmakers have debated the idea before. In 2013, a parliamentary committee approved a proposal to change Spanish clocks back one hour. But the full legislature never agreed.

Foreign media, however, have made much of Rajoy's speech. U.S. and British headlines say "Adios, Siesta!" or "Time to Wake Up!" — alongside stock photos of fat men snoozing, or even bullfighters sleeping on benches.

"A big fat lazy slob sleeping a siesta! It's an offensive image — but it's an image people outside of Spain have of Spain," says Matthew Bennett, editor of the website The Spain Report. "It's a stereotype of Spain, along with bulls and flamenco and tortilla and sangria — like the English and rain and umbrellas and bowler hats. There's no way of getting rid of these historical stereotypes — but they do grate with Spaniards, because they work very hard."

Spaniards typically work longer hours, and sleep less, on average, than other Europeans. While Rajoy's initial speech grabbed few headlines at home, the foreign media's subsequent coverage of it did.

Bennett says he's been fielding calls all week from foreign journalists asking him to explain the importance of the siesta to Spaniards. But he says most Spaniards simply don't take one. They run errands, have lunch or work straight through their midafternoon break, but are still expected to work late, too, and thus don't get home until 8 or 9 p.m.

"Everybody kind of idealizes European working hours, and [they] say, 'My goodness, if we finished at 5 or 6 [o'clock], we could have like three hours off every evening to do other stuff that's not work,'" he says.

Stuff like fighting bulls, dancing flamenco or drinking sangria on the beach — or so the stereotype goes.

"I guess there is like an element of truth in all of this. Yes, there is flamenco in Spain. Yes, we used to have siestas, maybe more in rural areas to escape the heat," says Yolanda Martín, a Spanish dance expert who gives flamenco-themed tours of Madrid and runs a website dedicated to the art form. "But no longer, really. Most people I know never take siestas — or maybe only on a Saturday."

At 32, Martín is part of a Spanish generation that's survived economic crisis, and is now working long hours — if its members have jobs at all — for less pay than in most other western European countries. But she says the stereotype of Spain — laid-back, or concerned more with fiestas than work — is something Spaniards themselves created, once upon a time.

"In the 1950s and '60s, when the Franco regime was trying to attract tourists to Spain, they kind of sold this idea. 'You want sun, you want beach? Come to Spain, you're going to get all of that.' We did kind of exploit that, and maybe it's brought money, and it's been good," Martín says. "But at the same time, it can harm us. We're not portrayed as a serious country. You know, we're like lazy."

Polls show most Spaniards would prefer to work a 9-to-5 schedule. But Rajoy, the acting prime minister, might not be the one to make the change.

His conservatives lost their majority in elections late last year, and rival parties are negotiating a possible coalition government, to oust him. Rajoy could leave office this summer.