Accessibility links
How Pope Francis Became A Foreign Policy Player : Parallels The pontiff isn't content to remain in the Vatican or sit on the sidelines. His trip this weekend to the Greek island of Lesbos is just one part of his emerging world view. 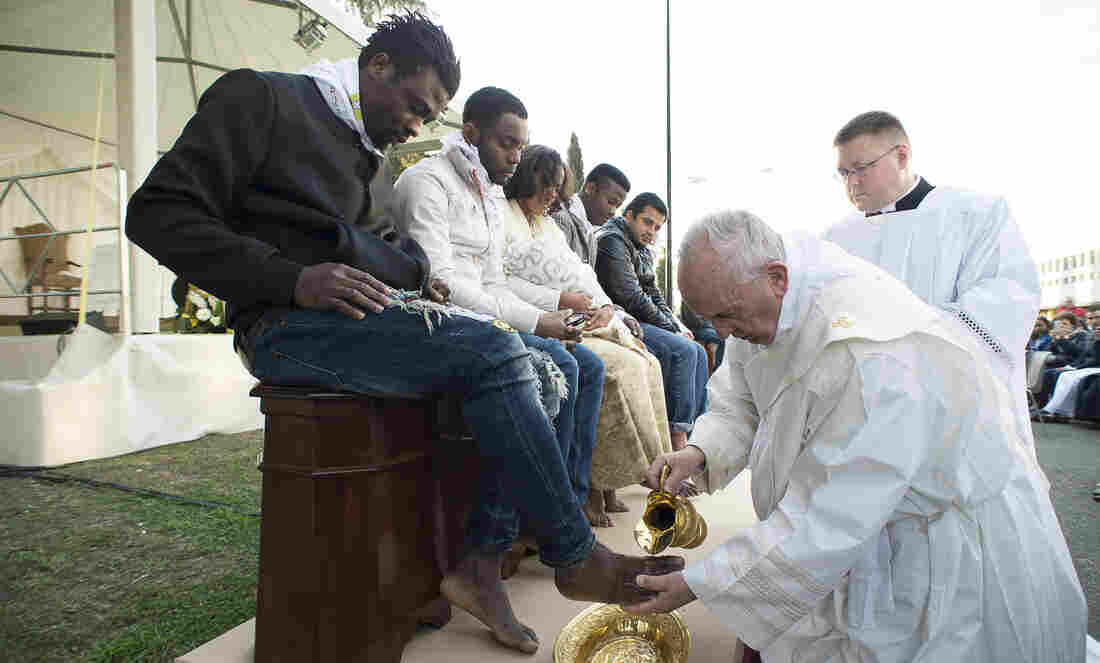 Pope Francis washes the foot of a refugee during a ritual at the Castelnuovo di Porto refugees center outside Rome on March 26. The pope has called on Europe to do much more for refugees and is traveling to the Greek island of Lesbos on Saturday to address the crisis. l'Osservatore Romano/AP hide caption 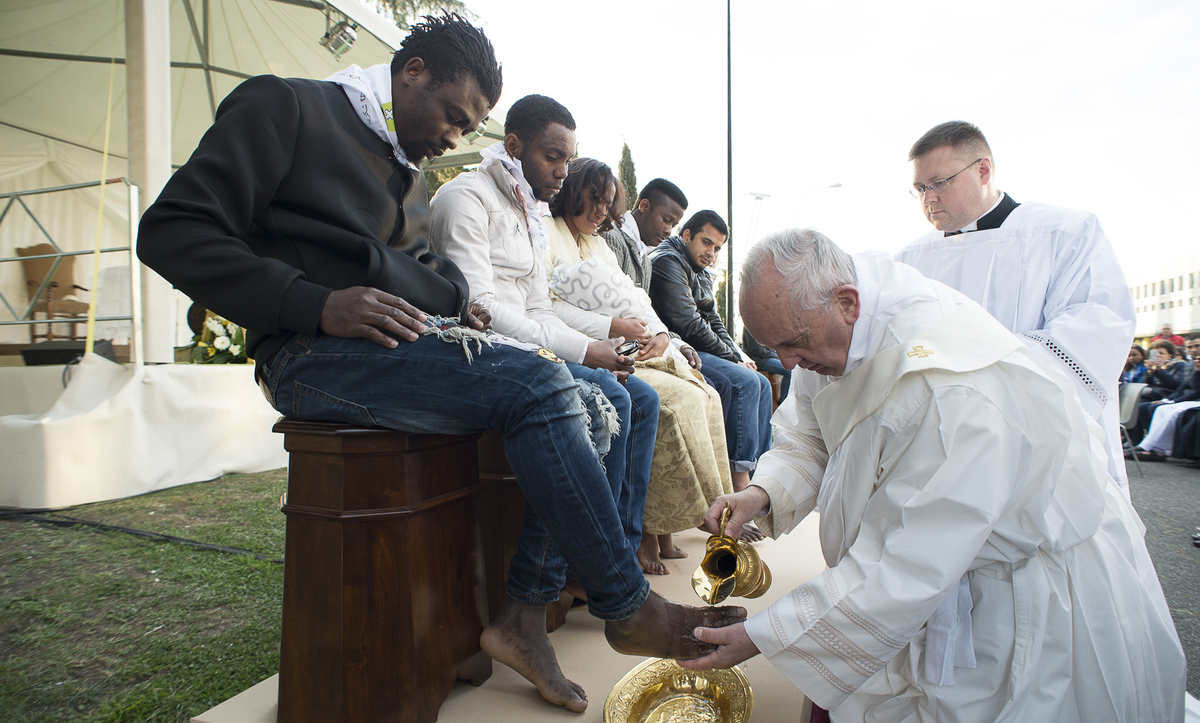 Pope Francis washes the foot of a refugee during a ritual at the Castelnuovo di Porto refugees center outside Rome on March 26. The pope has called on Europe to do much more for refugees and is traveling to the Greek island of Lesbos on Saturday to address the crisis.

When Pope Francis travels to the Greek island of Lesbos on Saturday, he will likely bring with him a sharp rebuke for Europe's response to the migrant crisis.

In 2013, on his very first papal trip, he traveled to Lampedusa to decry the "globalization of indifference" toward refugees and migrants. The Italian island — closer to Tunisia than to Italy — was then the major gateway to Europe for hundreds of thousands of migrants making the perilous sea crossing on smugglers' boats from North Africa. The pope laid a wreath in memory of the thousands who died at sea. And he lamented that no one had the courage to take responsibility for Europe's immigration dilemma.

Some Relationship Advice From Pope Francis

That 2013 trip, and the message that Pope Francis carried with him, was one of the first signs of a more assertive and less predictable Vatican stance on the global stage. Throughout the Cold War, the Vatican remained firmly in the Western camp. With Pope Francis, the first pope from the Global South, the Holy See showed his willingness to offer an unflinching critique of the West and its foreign policy failures.

Jorge Bergoglio, son of Italian immigrants, is the first non-European pope in nearly two millennia, and contrary to his two predecessors, he has put his focus on social, economic and environmental issues rather than church rules on sexual morality. He has irritated conservatives inside and outside the Catholic Church with his criticism of free-market capitalism, the ills of globalization and his warnings about climate change.

Francis has been particularly unsparing in his criticism of the continent of his grandparents. Addressing the European Parliament in 2014, he bluntly told European leaders their continent is weary and becoming irrelevant, "a 'grandmother' Europe, no longer fertile and vibrant. As a result, the great ideas that once inspired Europe seem to have lost their attraction, only to be replaced by the bureaucratic technicalities of its institutions."

Francis' hastily scheduled visit to Lesbos was triggered by last month's controversial deal between the European Union and Turkey on expelling migrants back to Turkey — a deal the Vatican has denounced as humiliating and in violation of humanitarian law.

The trip will be mostly symbolic. But Francis is a master at blending the spiritual with the political and, as in Lampedusa, he is likely to attack "the nameless and faceless ones who hold the reins of world power and whose decisions and policies are responsible for these human dramas."

When he became pope, there was some concern that Francis lacked experience with the wider world. He had traveled little outside of his native Argentina, his pastoral experience was rooted in a metropolis, Buenos Aires, and its shantytowns, addressing problems of everyday life — poverty, migration and human trafficking.

No one expected him to become a global player. But Francis is also the first Jesuit pope. Over the centuries his religious order often waged its own diplomacy, acquiring extensive knowledge of other cultures. The training shows.

Early in his papacy, in September 2013, Francis called for a worldwide day of fasting in opposition to the possibility of U.S. airstrikes in Syria. That move was seen by many observers as having helped persuade President Obama to pull back. 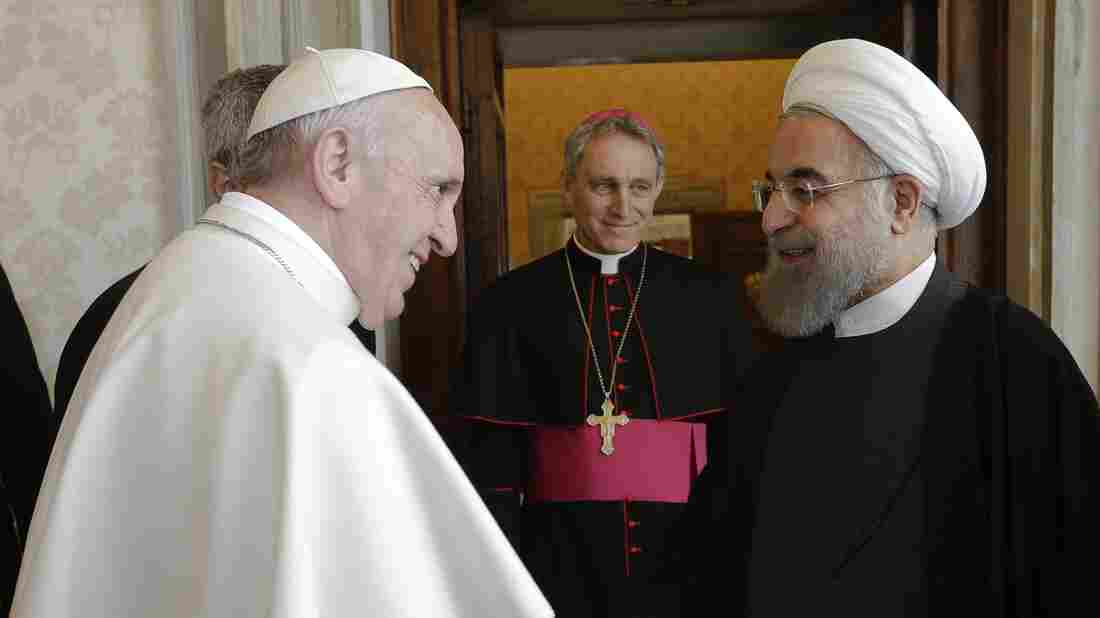 Pope Francis welcomes Iranian President Hassan Rouhani at the Vatican on Jan. 26. The pope has been extremely active in global political affairs and has often been critical of the West. Pool/AFP/Getty Images hide caption 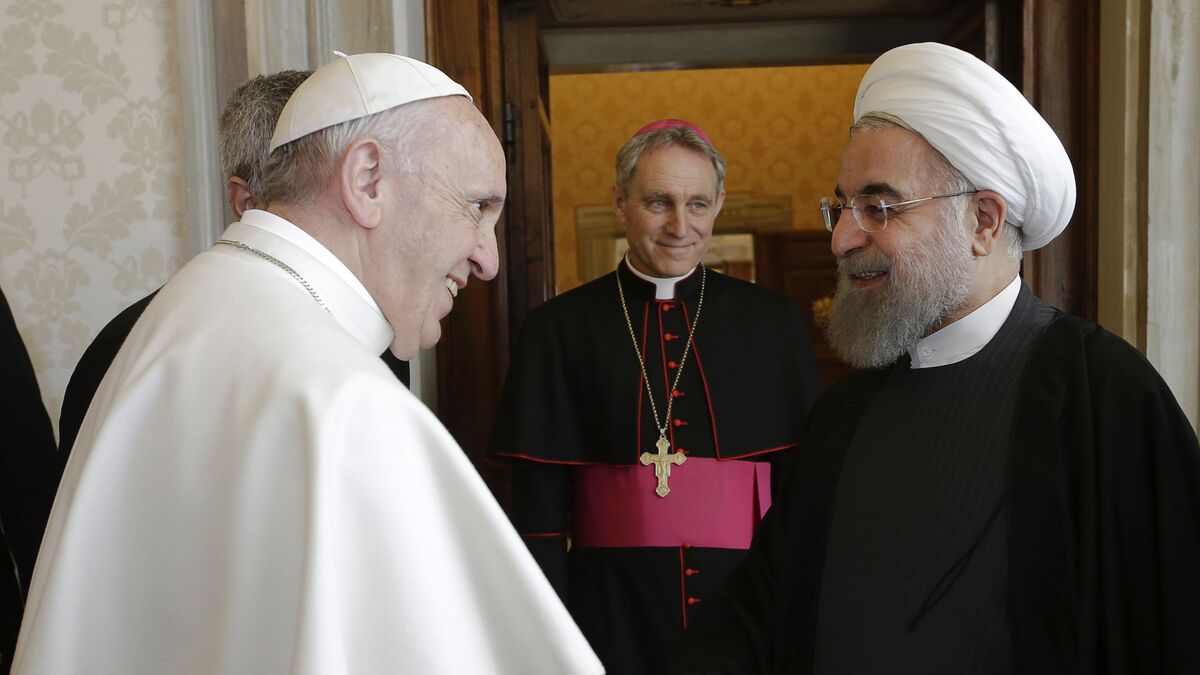 Pope Francis welcomes Iranian President Hassan Rouhani at the Vatican on Jan. 26. The pope has been extremely active in global political affairs and has often been critical of the West.

Vatican analyst John Allen said at the time that anti-war action won the pope goodwill in the Islamic world, where the memory of the Christian-led Crusades is still alive.

"On the Muslim street," Allen said, "the fact that he came out against Western intentions earned him a lot of political credibility." The pope's position on Syria was closer to Russia and China than to the West, a significant shift in the Vatican's geopolitical strategy.

The foreign policy area where Francis has raised the most eyebrows is in relations with Vladimir Putin's Russia. In February, on his way to Mexico, the pope made a stopover in Havana for a historic meeting with Russian Orthodox Patriarch Kirill — the first ever between a pope and the leader of the powerful and influential Russian Orthodox Church since the schism in Christianity almost 1,000 years ago.

Francis has made the restoration of Christian unity — with Orthodox and Protestants — one of the major goals of his papacy. Relations between the Vatican and the Istanbul-based Patriarch Bartholomew have flourished in recent years.

Indeed, the pope will be accompanied by Patriarch Bartholomew, spiritual leader of the world's Orthodox Christians, and Ieronymos II, head of the Greek Orthodox Church, in Lesbos on Saturday.

But relations with the Russian Patriarchate have been extremely tense, especially since the end of the Cold War. Besides longstanding theological disputes, the Russian Orthodox Church has accused Catholics of poaching on its turf, trying to lure its members and win converts.

Given the Russian Orthodox Church's close relationship with the Russian government, it's widely believed that President Putin strongly encouraged the meeting between the pope and Patriarch Kirill. Putin himself has traveled twice to the Vatican to meet Francis. The two have found common ground in the protection of Christians in the Middle East and elsewhere they are under threat.

This topic received particular emphasis in the joint declaration Francis and Kirill signed in Havana.

"In many countries of the Middle East and North Africa," the declaration said, "whole families, villages and cities of our brothers and sisters in Christ are being completely exterminated. Their churches are being barbarously ravaged and looted, their sacred objects profaned, their monuments destroyed."

Not everyone was pleased with the historic meeting. The joint declaration did not mention Russia's role in Syria and on the Ukraine it said only that it deplores "hostility" in Ukraine. Archbishop Svyatoslav Shevchuk, head of the Ukrainian Greek Catholic Church, said members of his Church felt "betrayed by the Vatican."

Ukrainian diffidence toward Rome is not new. In February 2015, Francis condemned the "fratricidal violence" in Ukraine, language that echoed the Kremlin, which has always referred to the conflict as a "civil war." That prompted Archbishop Shevchuk to respond that "we have aggression of a foreign country against Ukrainian citizens and the Ukrainian state."

In response to criticism in Kiev of his meeting with Kirill, earlier this month Francis reached out to the Ukrainian Catholic Church by announcing that he has asked all Catholic churches in Europe to take up a special collection on April 24 to fund humanitarian relief.

But Francis is clear about where his priorities lie. In a long interview with the Italian daily Corriere della Sera before meeting Patriarch Kirill in Havana, he indicated that on some issues he is closer to Moscow than to Washington.

Speaking Out On The Middle East

Francis said the U.S.-led invasion of Iraq and the disappointing outcome of the Arab uprisings were predictable. Turning to Libya, before and after the Western bombing campaign, he said, "before there was one Qaddafi, today there are 50. The West should be self-critical. On this topic," he added, "in part, the Holy See and Russia have a convergence of analysis. In part, it's best not to exaggerate because Russia has its own interests."

Massimo Franco, the political analyst who conducted the interview, says Pope Francis perceives that "Eurocentrism is over and the West is in deep crisis" and in a multipolar world, he sees Russia as a valid interlocutor because of "the void left by the West."

Negotiation and reconciliation are pillars of the Francis papacy. In that same interview he said, "bridges last and help peace, walls do not. Walls seem to defend us, but all they do is separate us, for this reason they must be torn down."

The pope, who described himself as coming "from the other end of the earth," has embraced the bully pulpit of the papacy and has emerged as a daring, independent broker on the global stage. In Lesbos, Francis is likely to speak his mind and hold the European Union accountable for its response to the most serious crisis in its history.