Accessibility links
Pope And Patriarch Make A Rare Show Of Unity In Greece : Parallels The leaders of the Catholic and Orthodox churches called on Europe to show greater compassion for migrants, a move widely welcomed by migrants as well as residents on the Greek island of Lesbos.

Pope And Patriarch Make A Rare Show Of Unity In Greece

Pope And Patriarch Make A Rare Show Of Unity In Greece 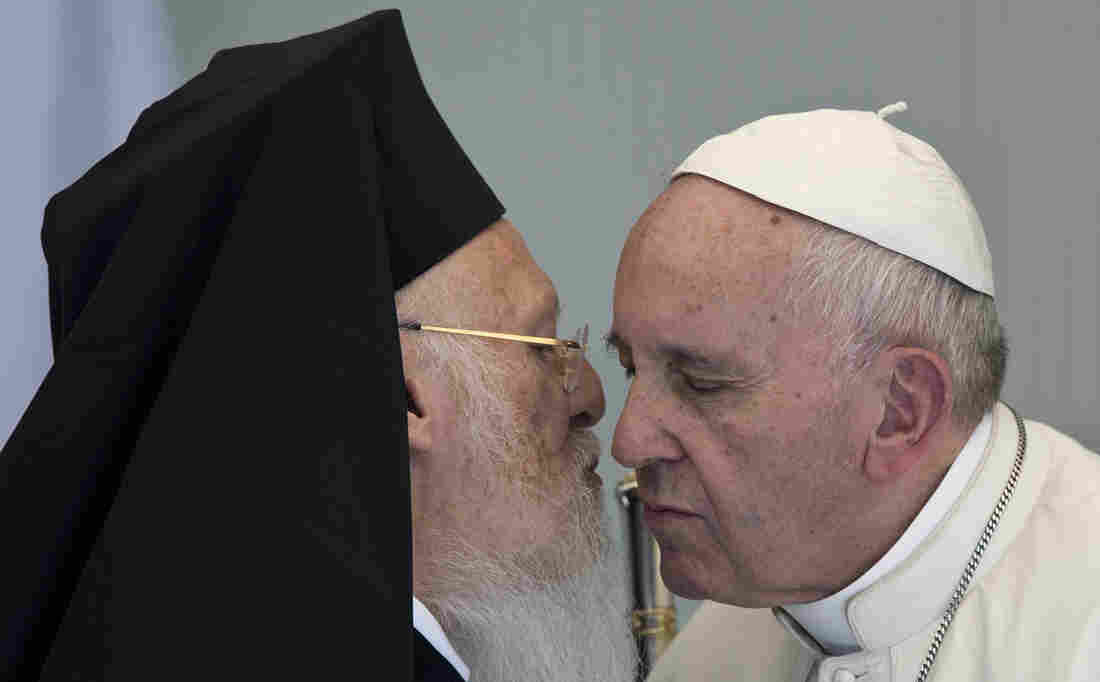 Pope Francis (right) embraces Patriarch Bartholomew I, spiritual leader of the world's Orthodox Christians, during their joint visit to a center for migrants on the Greek island of Lesbos on Saturday. Both called on Europe to show greater compassion in dealing with migrants. Petros Giannakouris/AP hide caption 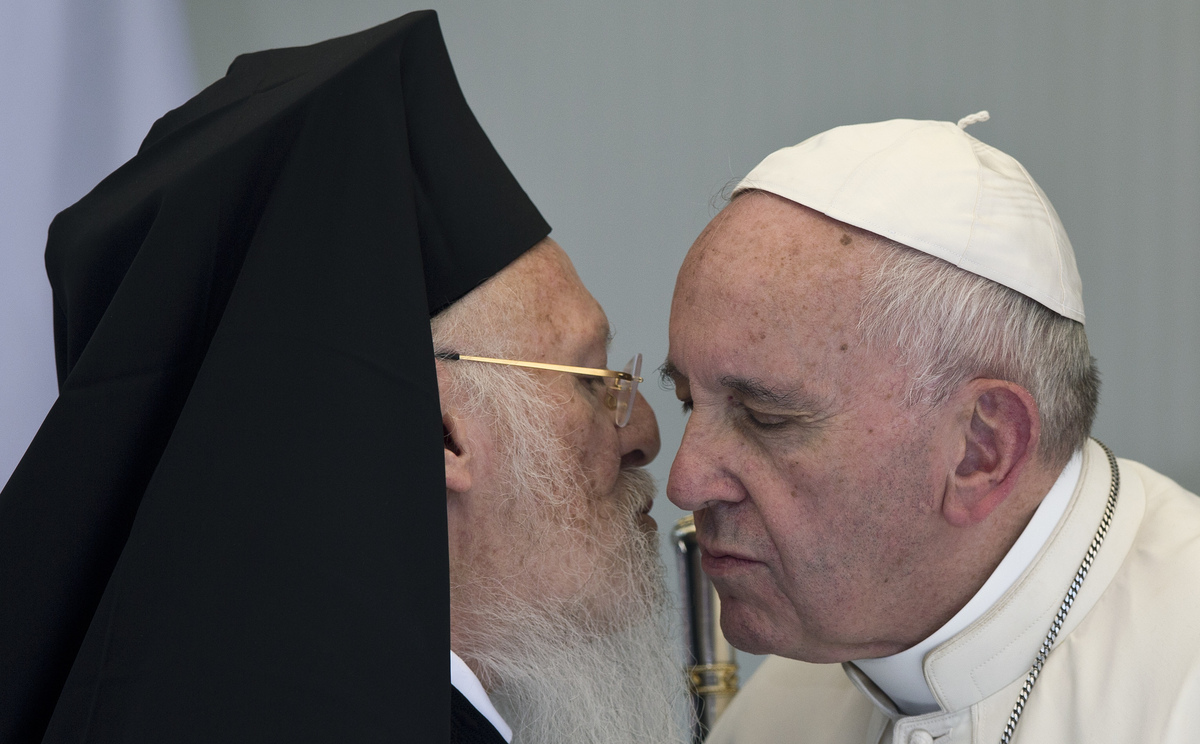 Pope Francis (right) embraces Patriarch Bartholomew I, spiritual leader of the world's Orthodox Christians, during their joint visit to a center for migrants on the Greek island of Lesbos on Saturday. Both called on Europe to show greater compassion in dealing with migrants.

For Greek citizen Katerina Bouretzi, seeing the leaders of the eastern and western churches together on her island of Lesbos this weekend was a gift.

"The refugee crisis put Lesbos on the map but it also isolated us from other Europeans, who like to blame us for everything," she said. "They blamed us for allowing the refugees to cross the Aegean, and I thought, 'What are we supposed to do, drown them?' And then they blamed us for being nice to them after they arrived here."

Unlike European Union leaders, she says, Pope Francis and Patriarch Bartholomew I, the spiritual leader of the Greek Orthodox Church, show compassion for asylum-seekers and the Greeks caring for them.

"Pope Francis is our friend," she said, waving at him as his motorcade left the main port of Mytiline on Saturday. "He is a friend of Greeks. We need friends right now."

Despite historic divisions between the two churches, the warm personal relationship between Pope Francis and Patriarch Bartholomew has brought Christians from the east and west closer together, at least for now, says Emmanuel Perselis, a professor of theory and practice of Christian religious education at the University of Athens.

"To the new generation of eastern Orthodox Christians, their actions, especially on the refugee issue, are proof that religious leaders can be united and try to solve big problems," Perselis says.

The trip to Lesbos to meet with asylum-seekers and show solidarity with Greece has been the strongest joint statement the church leaders have made yet, he says.

"It seems to be a political one, even though they are not framing it that way," Perselis says. "Here you have the patriarch and the pope, along with the Archbishop of Greece, pushing politicians to do something. It's the first time these three leaders have made a statement that goes beyond theological and ecclesiastical boundaries."

On Lesbos, Archbishop Ieronymos of Greece, for instance, declared that "only those who see the eyes of those small child that we met at the refugee camps will be able to immediately recognize, in its entirety, the 'bankruptcy' of humanity and solidarity that Europe has shown these last few years to these, and not only these, people."

Such statements were met with silence by the strongly anti-migrant governments of Poland and Hungary, both historically Catholic countries in the European Union.

But they found sympathy with Greeks like Vassiliki Stylianopoulos-Moore, who is strongly critical of an EU deal with Turkey that focuses on deporting asylum-seekers arriving on Greek shores after March 20.

"None of us want the refugees to drown in the Aegean, which I suppose wouldn't happen if they don't try to cross," she says. "But they are still crossing, even after this deal, and this idea of, we have to send them back once they do, is inhumane."

Pope Francis asked asylum seekers not to lose hope. Taqwa Hariri, a 21-year-old Syrian now stuck on Lesbos and hoping she will be considered for asylum, says she was heartened by his words.

"I'm happy he is reminding the world that we are human beings," she says.

Hariri says she was also impressed that the pope took 12 Syrian refugees on Lesbos back to Rome with him.

Ahmad al-Mohammadi, an Iraqi computer engineer living in a fetid makeshift migrant camp on the Greek-Macedonian border, heard the news on WhatsApp. As a devout Muslim, he found the gesture of a Christian leader embracing Muslims deeply moving.

But he says he's lost hope that EU countries who "hate Muslims" will follow the pope's lead and choose to embrace asylum seekers like him, even after they have been vetted.

"This is a political game," he says about EU decisions to close borders to migrants. "Games have no humanity."