Accessibility links
'Islamic Fashion' Causes A Stir In France : Parallels Some fashion houses have begun catering to Muslim consumers in Europe with loose-fitting, body-covering clothing lines that include head-covering scarves. But in France, the trend is controversial. 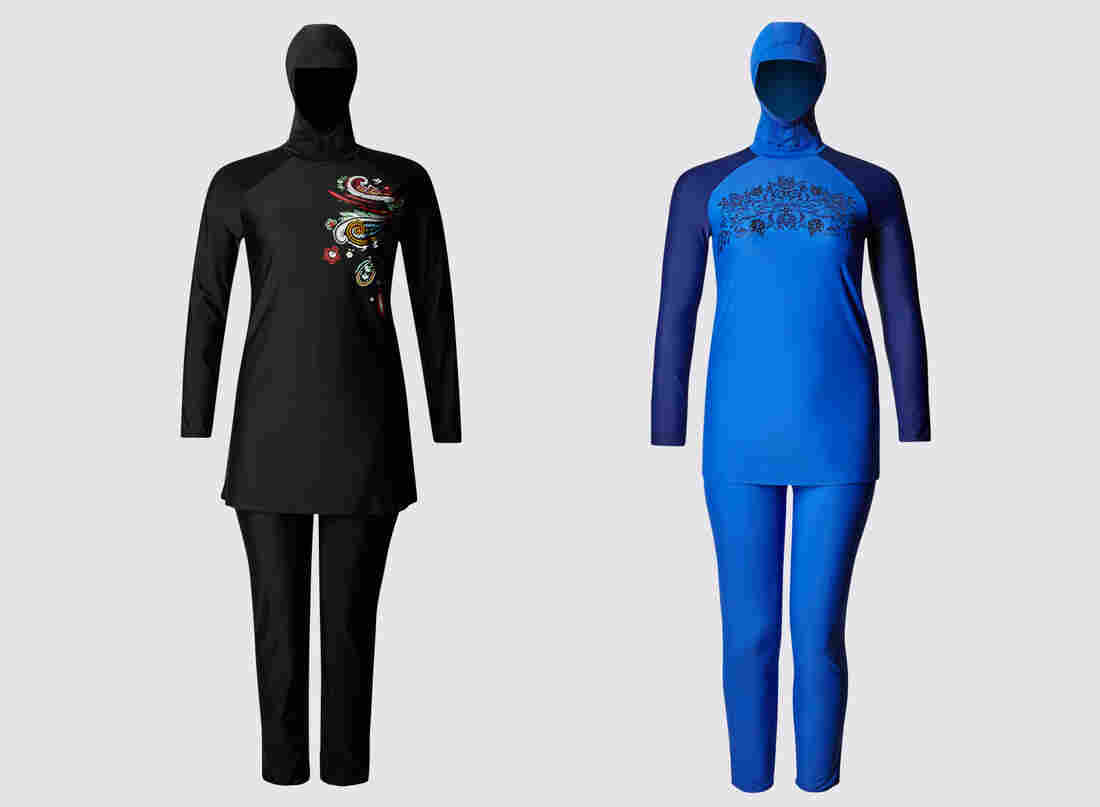 Some women in France say they feel conflicted by a growing presence of Islamic fashion, including the "burkini," a full-body swimsuit. These two are marketed by Marks & Spencer. Courtesy of Marks and Spencer hide caption 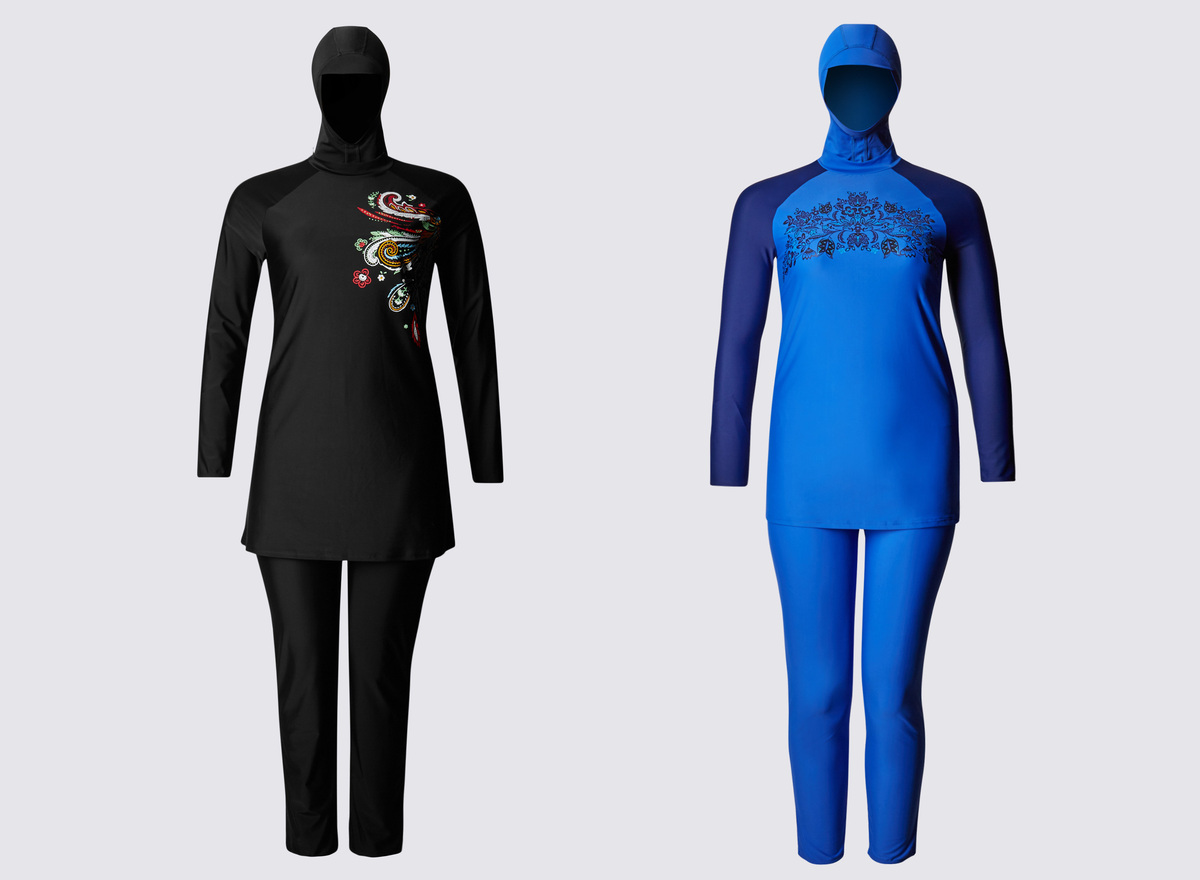 Some women in France say they feel conflicted by a growing presence of Islamic fashion, including the "burkini," a full-body swimsuit. These two are marketed by Marks & Spencer.

Courtesy of Marks and Spencer

Some major designers are launching fashion lines aimed at Muslim women — loose-fitting tunics and skirts with accompanying head veils. Once destined for markets in the Middle East, such clothing is gaining mainstream appeal in the West. In stores across Europe, "Islamic fashion" is now becoming available from top designers such as Dolce & Gabbana and DKNY.

But Paris shopper Nellie Bertrand says she feels conflicted by the trend, especially the women's bathing suit with trousers and a hood. It's dubbed the "burkini," now sold by the British retailer Marks and Spencer's, which has stores in and around Paris.

"Honestly, it's really complicated," Bertrand says. "Because, you know, people are supposed to be able to wear what they want. But in France, we're not used to having those kind of clothes in schools and they are not allowed."

Bertrand is referring to a 2004 ban on the Muslim headscarf in French public schools and government offices.

The debate over Islamic fashion turned into an uproar after Laurence Rossignol, the French women's rights minister, spoke about it in a radio interview in late March.

"We can't let these forces dictate what women wear," she said. When the interviewer pointed out that many women choose to wear the veil, Rossignol said, "Yeah, sure, like some American Negroes supported slavery."

With Europe's largest Muslim population, France is struggling to balance tolerance, secularism and personal freedom in a climate of heightened fear and security following two Islamist terrorist attacks in the last year. A state of emergency has been in place since November. 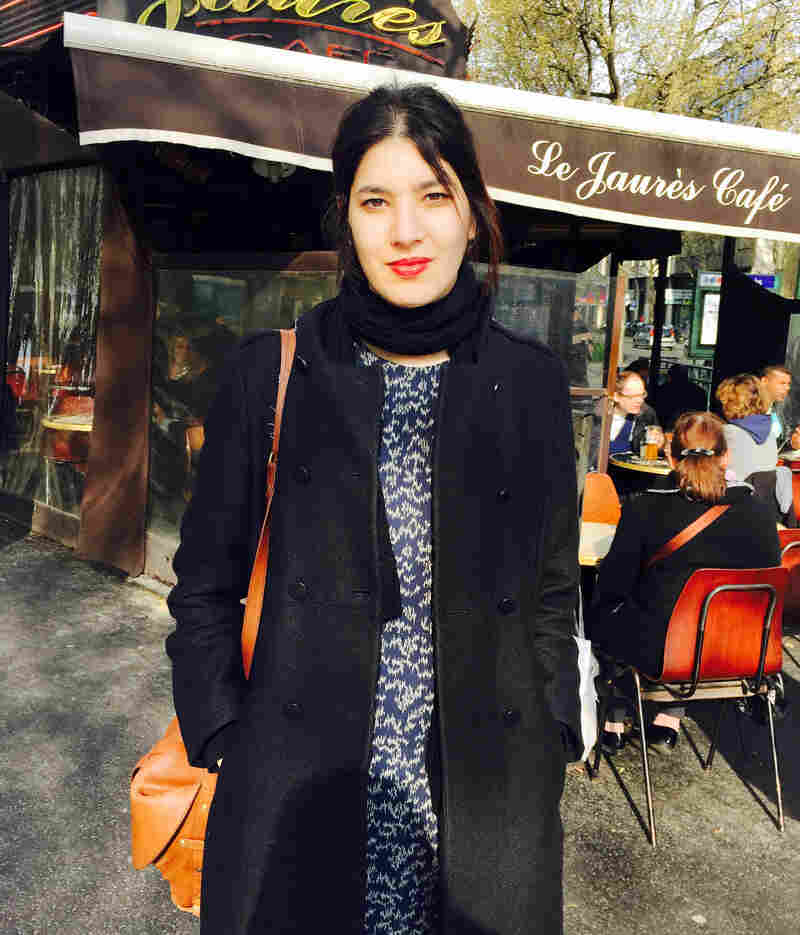 "To be Muslim in France is becoming more and more complicated, because we are talking so much about Islam and its negative offshoots. And women who wear the veil are on the front line, because people can't help but somehow associate them with these attacks," says French author Faïza Zerouala. Eleanor Beardsley/NPR hide caption

"Anytime you speak about Muslim women and anything dealing with Muslims in France, it becomes a hysterical debate," says Yasser Louati, who heads the French Collective Against Islamophobia.

Rossignol, he says, "is the minister for women's rights, and among those rights is the right to dress however you decide to dress."

Rossignol later said she regretted her remarks. But others in France have expressed similar misgivings. Feminist philosopher Elisabeth Badinter called for a boycott of brands selling Islamic fashion, and Paris Mayor Anne Hidalgo said she found the trend a little "upsetting."

"They have pictures of nuns and priests in their ads and they have baroque crosses as jewelry and that's all OK," she says. "I think France is freaking out about this right now because they're just very nervous. And the French have always prided themselves on what they call laic, this system of separation of church and state, and so they have to react in this way in order to shore up the argument for the ant-veil law – that we just don't have anything religious creeping into our everyday lives."

French secularism was established by a 1905 law that strictly separated the church and state. At the time, the law aimed to keep a powerful Catholic church from dictating policy. While secularism is meant to ensure the state's neutrality with regard to religion and ensure that all religions can practice freely, many feel it is now being exhorted to discourage religion — especially Islam.

Faïza Zerouala is a French journalist and a Muslim. Her book, Voices Behind the Veil, tells the story of 10 French women who wear the hijab.

"To be Muslim in France is becoming more and more complicated," she says, "because we are talking so much about Islam and its negative offshoots. And women who wear the veil are on the front line, because people can't help but somehow associate them with these attacks."

Zerouala says secularism is being used today as a shield against Islam. It's unacceptable to say you're anti-Muslim, she explains. But it's okay to say you're fighting to defend secularism.