Accessibility links
Joining ISIS: It's Not Always For Reasons You Might Assume : Parallels Two ISIS fighters captured in Syria say they joined the militant group as a way to fight an oppressive regime. But it also provided friendship, and it didn't seem much more violent than other options. 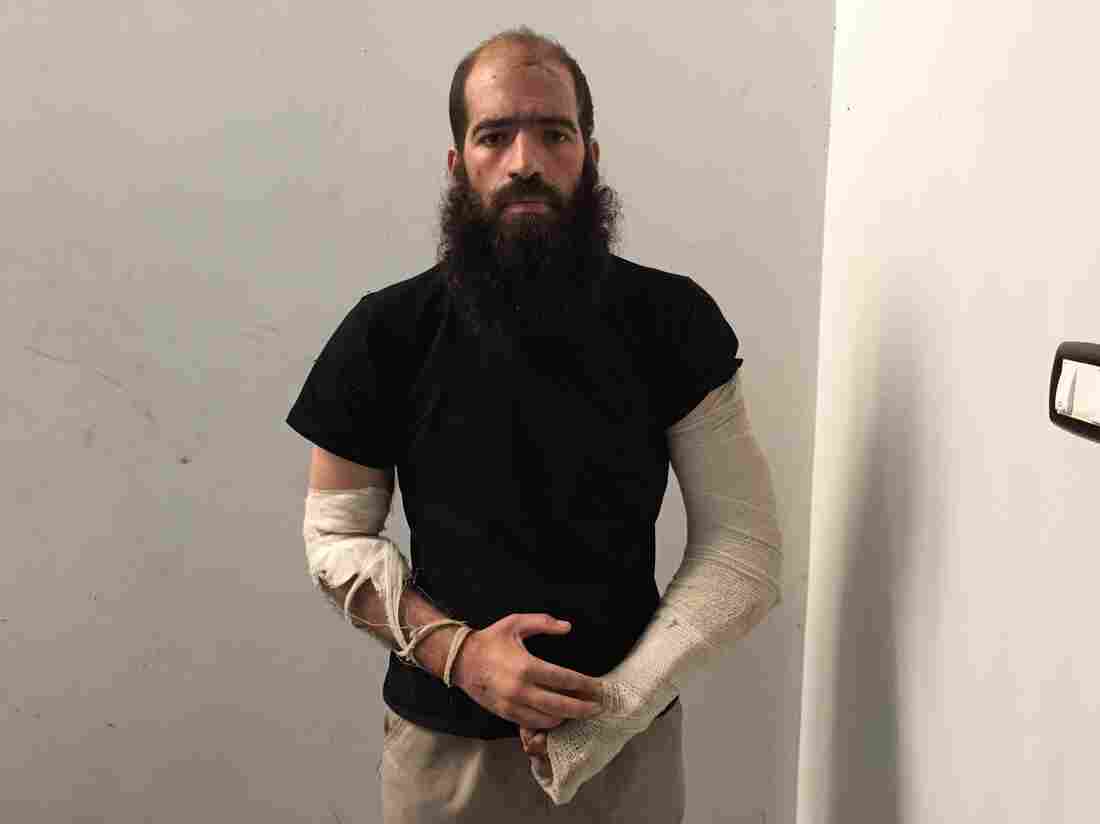 Ahmed Darwish appears in a police station in Rumeilan, northern Syria, after being captured by Kurdish fighters as he was running away from a battle. He was wounded in a coalition airstrike in support of anti-ISIS forces. "There was camaraderie, friendship, like a brotherhood between us," he says of his time in ISIS. Alice Fordham/NPR hide caption 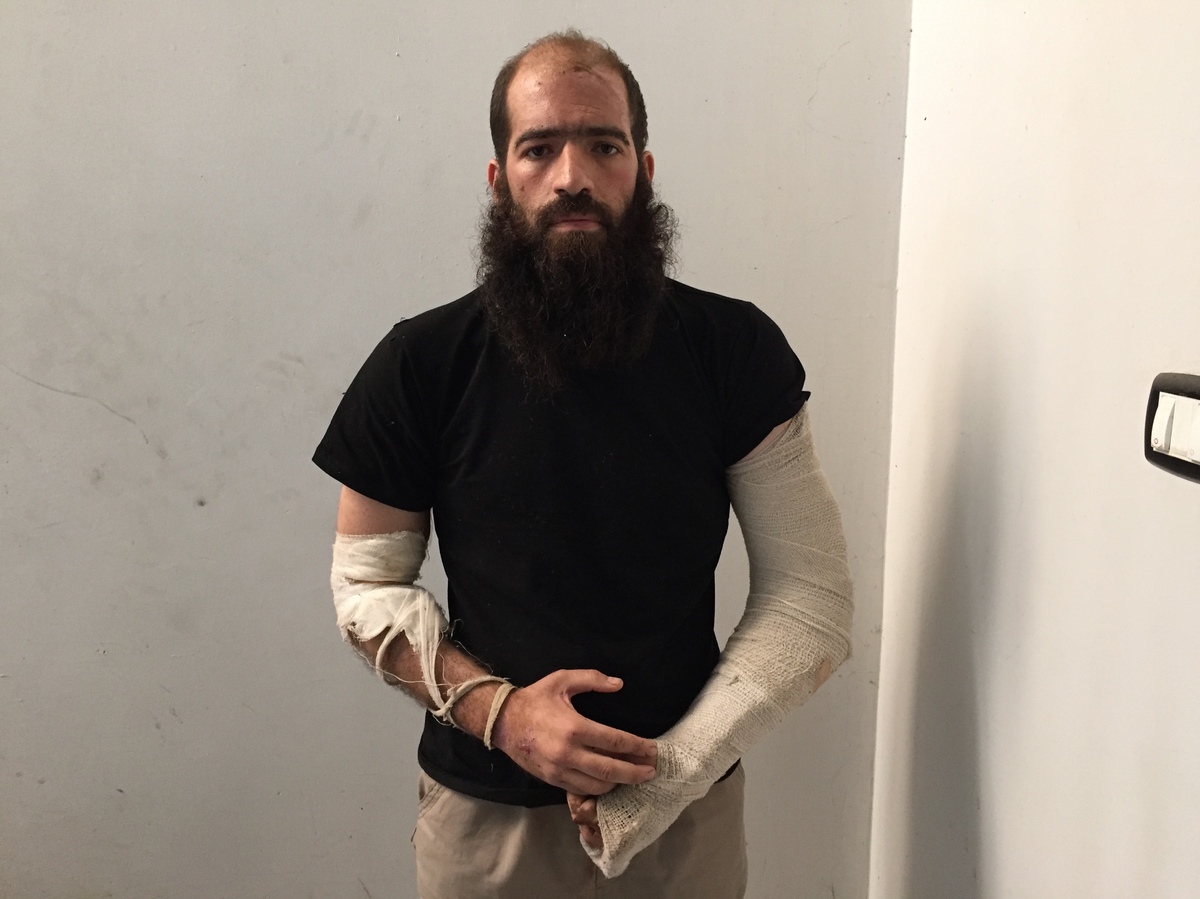 Ahmed Darwish appears in a police station in Rumeilan, northern Syria, after being captured by Kurdish fighters as he was running away from a battle. He was wounded in a coalition airstrike in support of anti-ISIS forces. "There was camaraderie, friendship, like a brotherhood between us," he says of his time in ISIS.

When I meet the captured ISIS fighter, he doesn't look much like the bombastic murderers in the propaganda videos.

Ahmed Darwish, 29, is slight, hunched and shuffling in orange plastic sandals, wincing in pain as he walks into a police station in Rumeilan, northern Syria, escorted by the Kurdish fighters who captured him running away after a battle. His arms are bandaged and head is wounded: he was struck in a coalition airstrike in support of the anti-ISIS forces.

It can be hard to understand why young Muslims join ISIS. The group is so bloodthirsty and so ready to advertise its brutality.

But talking to Darwish, the story of how he came to what he just calls "the State" isn't one of extremism and bloodlust — but revolution, disillusionment and loneliness.

A soldier from the Kurdish forces holding Darwish remains in the room throughout our conversation.

I ask Darwish how he came to be involved in Syria's civil war. "I was in Saudi Arabia and I came at the beginning of the revolution," he says in Arabic, referring to the uprising against President Bashar Assad that erupted in 2011.

His family was from the Syrian city of Homs, but his father was working in Saudi Arabia as a mechanic and Darwish was helping. But when he saw demonstrations on TV, he wanted to help bring down Assad.

"Oppression," he mutters. "There was oppression."

He got to Homs after the euphoria of the first demonstrations of 2011, just as the protesters were arming themselves against the regime's military crackdown. But he became disillusioned.

"I discovered there that in the demonstrations, there is something unclean. There was stealing, thievery," he says.

After two years under siege, the rebels cut a deal with the regime and Darwish had to leave, going to southern Turkey, where he began chatting on Facebook with a cousin who had joined ISIS.

So Darwish headed back to Syria, to the ISIS-held town of Al Bab, in the northern part of the country, and joined up.

The ISIS men were "trustworthy, no lies, no stealing," he says. "The guys were clean, with white hearts."

He started with two months of repentance and religious study, followed by 15 days of military training. And then he was sent to the frontlines, where he would launch attacks on government forces. He says it was the happiest he's ever been, the closest to God.

"And there was camaraderie, friendship," he says, "like a brotherhood between us."

NPR spoke to rebels who knew Darwish in Homs. They verified his identity after seeing his photograph and remember him being in the siege with them.

Analyst Hassan Hassan, a resident fellow at the Tahrir Institute for Middle East Policy and co-author of a book about ISIS, puts forward several reasons that people might join, beyond identifying with ISIS's extreme version of Islam.

Some rebels have turned to the organization because they hoped they'd make the rebellion less fragmented. Hassan says one of his friends takes the political position that "this is an organization that actually can, by force, unite all the rebels against the Assad regime."

Hassan also points out that while ISIS broadcasts its violence, it may not actually be the most violent actor in Syria's civil war.

It's not that ISIS violence is excusable, he says. "But it's understandable in the context of Syria and Iraq. We have to remember that everything that ISIS has done, the Assad regime has done, and more, and probably worse."

Torture and murder on a vast scale by the regime have been extensively documented.

The other ISIS fighter I meet won't let us use his name. He is younger, and says his reason for joining was simply that everyone else was doing it.

Now 19, he was 16 when the rebels who ran his area decided to ally with ISIS. I ask if most people were on board with that.

"Oh yes, sure," he says. "They were supporting them in a strong way."

His uncle urged him to join, and he ended up manning checkpoints. His father had tried to stop him.

The young man is thin, big-eyed, with a beard that's still just fluff on his cheeks. He says he's not certain what will happen to him. Shortly before he's led back to his cell, he says he wishes he had listened to his dad.