Accessibility links
Starbucks And Steel: The Divergent Directions Of China's Economy : Parallels China is now home to two economies — one fading and industrial, and the other, a more thriving service sector. A steelworker, a Starbucks executive and a former banker explain. 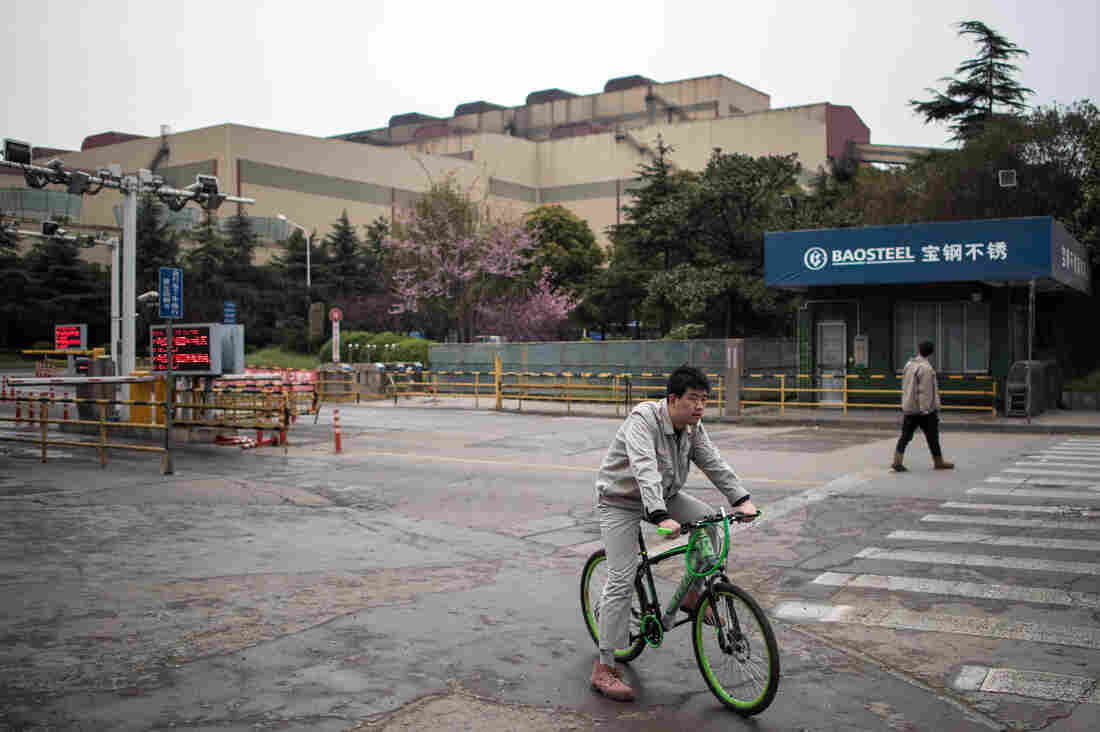 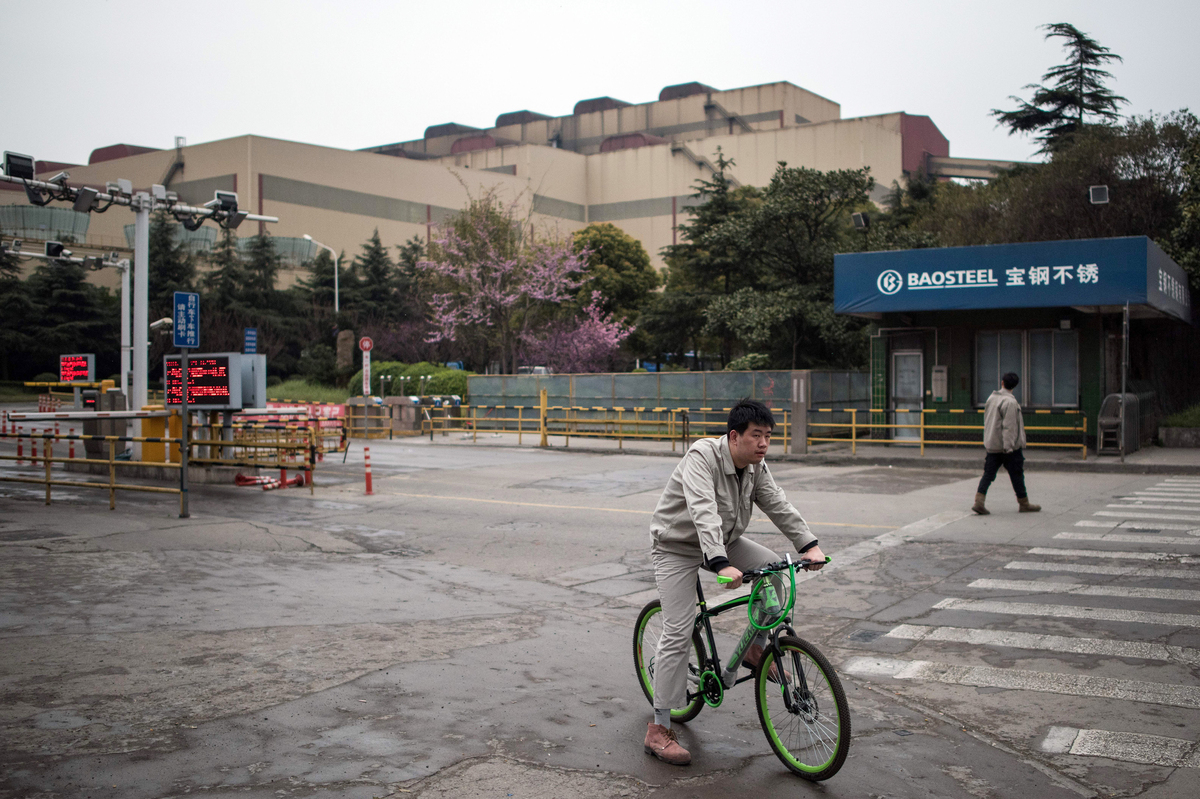 A worker leaves the Baosteel Group Corporation plant in Shanghai in March 2016.

When it comes to the future of China's economy, Wang Dengwen is yesterday's man. He came from the countryside and found work a few years ago at Shanghai's Baosteel, smoothing the edges off steel plates.

After his first year, the steel market began to slide and the company cut Wang's monthly salary from $780 to about $620. A couple of months ago, Wang, 34, took a second job, earning $2.25 an hour delivering food for KFC.

He was so beat after a recent 12-hour steel shift that he mixed up a food order. Now, Wang's scared he could lose his KFC job.

"I'm screwed," he says wearily. "I'm already down to my last chance. I only pray nothing will go wrong with my second job. This is what I think about every day. Don't lose this job!"

Manufacturing and industrial jobs like those at Baosteel helped drive employment in China over the last three decades and transformed tens of millions of lives. Factories provided opportunities for poor farmers like Wang to come to big coastal cities, make some money and save for the future.

But China's economy is changing. The nation's industrial sector, which once helped fuel double-digit economic growth, is in decline and some parts of the country are in recession. Meanwhile, the Communist Party is trying to make a crucial transition to a high-income economy focused on services and driven by consumer spending. 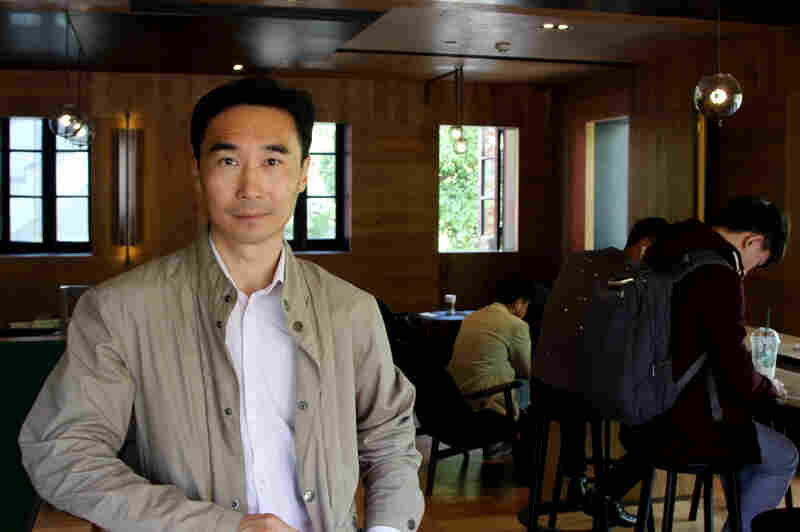 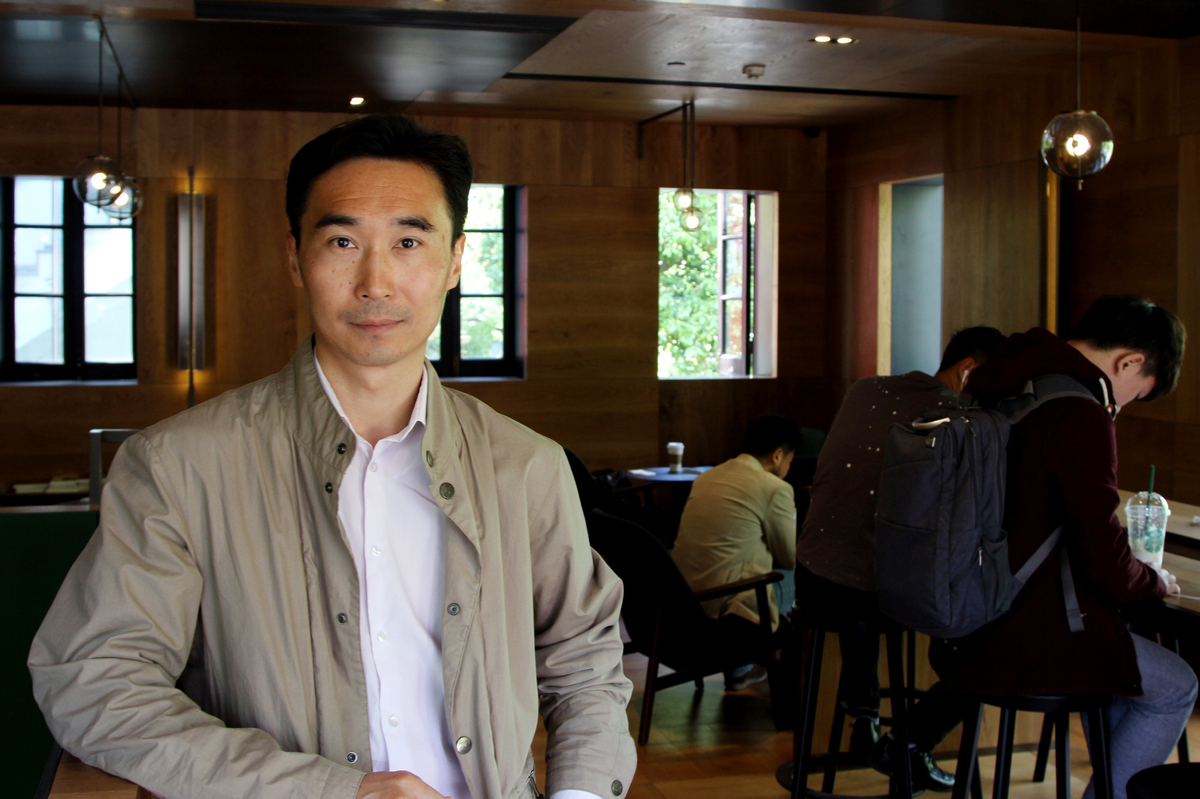 When many analysts look at China today, they see a tale of two economies.

From the gates of Baosteel in Shanghai's suburbs, you can look 15 miles down Jiangyang North Road and see three of the world's tallest skyscrapers rising from Lujiazui, the city's financial district. Compared to Baosteel, downtown Shanghai might as well be another planet. It is not home to factory workers, but to financiers, lawyers, businesses owners and executives.

Among them is Larry Dong, who oversees operations for Starbucks coffee shops in Shanghai. He's not struggling with decline. He's trying to manage growth.

Dong's task: opening and staffing 300 new Starbucks in the city and in neighboring Jiangsu and Zhejiang provinces this year. Shanghai already has 450 Starbucks, more than any other city in the world, he says. Dong and Starbucks are riding the wave of consumer spending and service sector expansion. 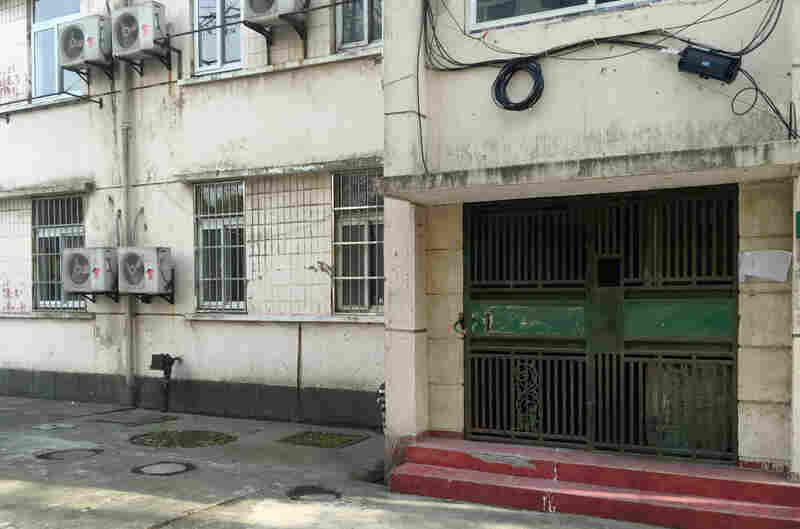 An abandoned, five-story dormitory at Baosteel sits on the outskirts of Shanghai. The steel company has been moving production out of the city and workers have quit, following salary cuts tied to low steel prices. Frank Langfitt/NPR hide caption 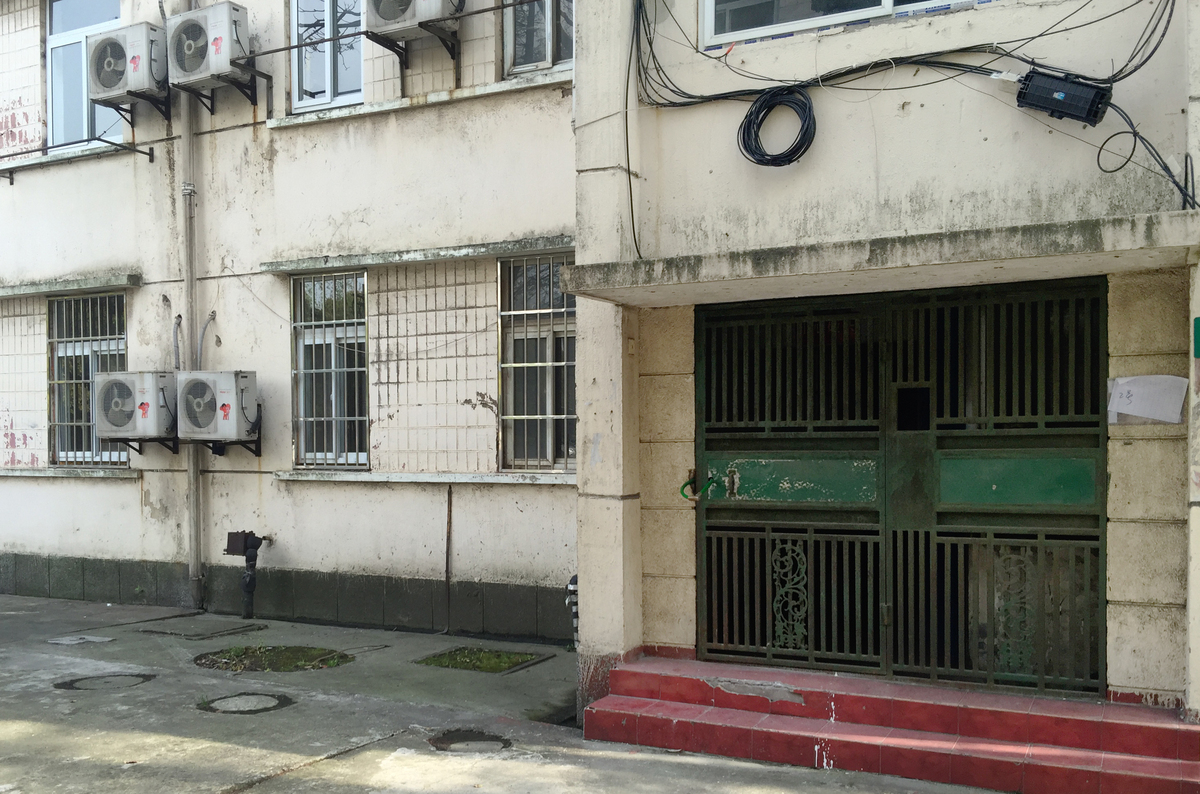 An abandoned, five-story dormitory at Baosteel sits on the outskirts of Shanghai. The steel company has been moving production out of the city and workers have quit, following salary cuts tied to low steel prices.

"I think business is very good, because every year we see very high growth," says Dong, sitting in Starbucks' sleek store in Xintiandi, a pedestrian shopping area which is dotted with outdoor cafes. "China is now Starbucks' second biggest market around the world. It will quickly surpass the U.S. in the future and become the largest market."

In recent years, the fortunes of China's steel industry have headed in the opposite direction. During the global financial crisis, the Chinese government launched a nearly $600 billion stimulus program, building everything it could to employ workers, pump up the economy and avoid a recession.

It worked, but now the country faces thousands of empty apartment blocks and a mountain of local government debt. This means less demand for steel — and for workers like Wang.

"Producing steel is so cheap, raising pigs beats it," says Wang, who plans to save what he can in the next two years and then head back home to the countryside. "Now half a kilo [1.1 lb.] of pork costs about $1.50. How much does half a kilo of steel cost? Just a few cents." 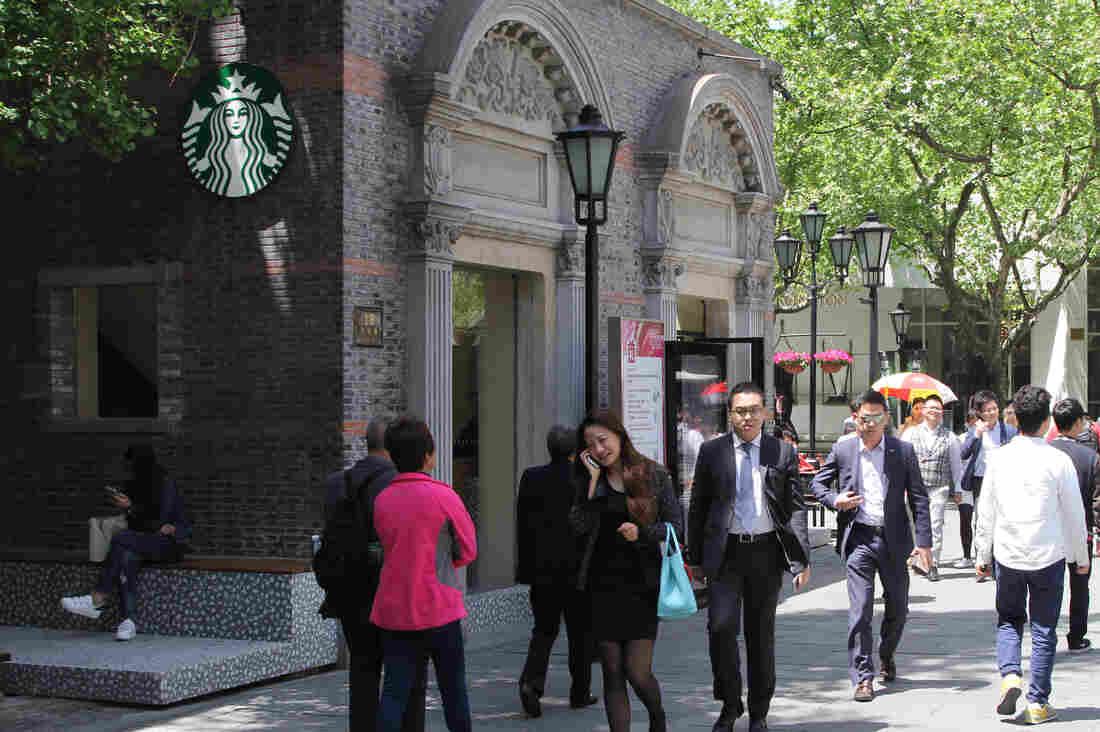 This coffee shop in Xintiandi, a pedestrian shopping area in Shanghai, is one of 450 Starbucks in the city. Shanghai has more Starbucks than any other city in the world, according to Larry Dong, who oversees operations for Starbucks shops in the city. Frank Langfitt/NPR hide caption 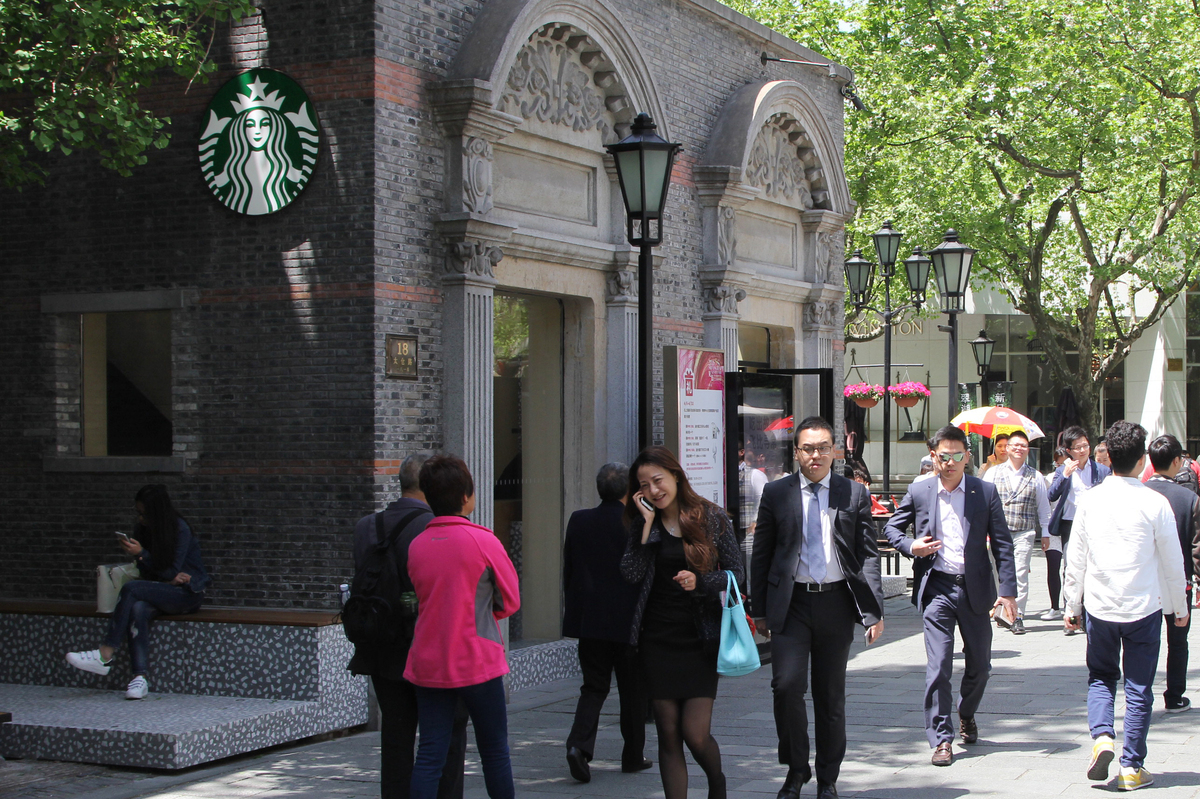 This coffee shop in Xintiandi, a pedestrian shopping area in Shanghai, is one of 450 Starbucks in the city. Shanghai has more Starbucks than any other city in the world, according to Larry Dong, who oversees operations for Starbucks shops in the city.

Steel prices have rebounded somewhat in recent months, but the government says it must still cut at least 100 million tons of steel capacity in the next five years to begin to bring supply and demand into line. That means getting rid of at least 500,000 steel jobs, according to Laura Zhai, a credit analyst with Fitch Ratings in Hong Kong.

Zhai says shutting down just 10 percent of steel capacity will also force the government to confront $30 billion in debt.

"How are you going to repay the debt?" says Zhai, who adds that the overall debt-to-asset ratio in China's steel sector is very high, 70 percent.

When Larry Dong looks across the Xintiandi Starbucks, he sees China's future: young professionals on smartphones and laptops, working, chatting and spending.

Dong, 41, says rising middle- and upper middle-class incomes are helping drive the company's sales and expansion. When he began managing Shanghai's first Starbucks in 2000, he made about $280 a month. Now managers make more than four times that, he says.

Despite the country's economic challenges, many Chinese remain optimistic about their own financial situation, according to a survey of 10,000 people in 44 cities by McKinsey & Company. Fifty-five percent of those surveyed said they were confident their income would increase significantly in the next five years, according to McKinsey's 2016 China consumer report.

"The service industry in China, particularly the food and beverage business, benefited a lot from the dividends of China's economic growth," says Dong, who is studying for an executive MBA at China Europe International Business School in Shanghai. "There is a lot of room for the service industry to grow in the future."

But even with a healthy service sector, China's overall economic growth continues to slow. The reason is basic math: Consumer spending and the service sector aren't expanding fast enough to offset the slide in the old industrial economy. That decline is also affecting other sectors, such as banking.

Bryson, 31, quit his job as a loan officer at a government bank earlier this year. He doesn't want NPR to use his full name because talking about state banks is politically sensitive. Like Wang, the steelworker, Bryson also suffered a salary cut. He was making two-thirds fewer loans this year than when he started in 2012 because state-owned industrial companies were doing so badly, they could no longer qualify.

"The entire bank's revenue is down and the number of nonperforming loans is going up," he says. "Compared with other financial sectors, banking is no longer that attractive."

On a visit to Shanghai to train for a new job, Bryson says he sees China at a crossroads.

"China hasn't found a new economic growth engine," he says. "If I had to use a word to describe the current state, it would be 'confusion.' We don't know where the country is headed."

China's government is banking that services and consumption will drive the country's economy into the future. But, as the experience of both Bryson and Wang suggest, it's going to be a bumpy ride.