Accessibility links
Backing 'Brexit,' A Salmon Smokehouse Says It's Been Swimming Upstream : Parallels Mom-and-pop businesses are considering how a British exit from the EU could affect them. The owner of Britain's oldest salmon smokehouse, who wants out, says EU membership dilutes British culture. 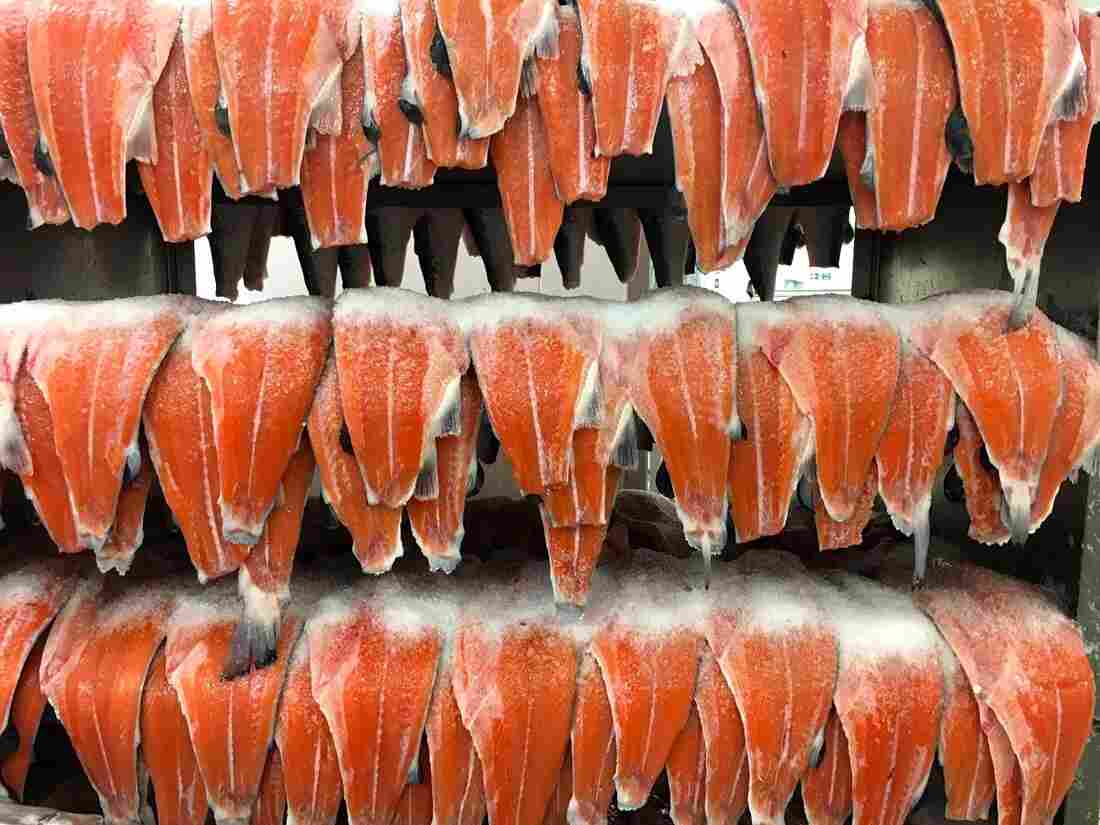 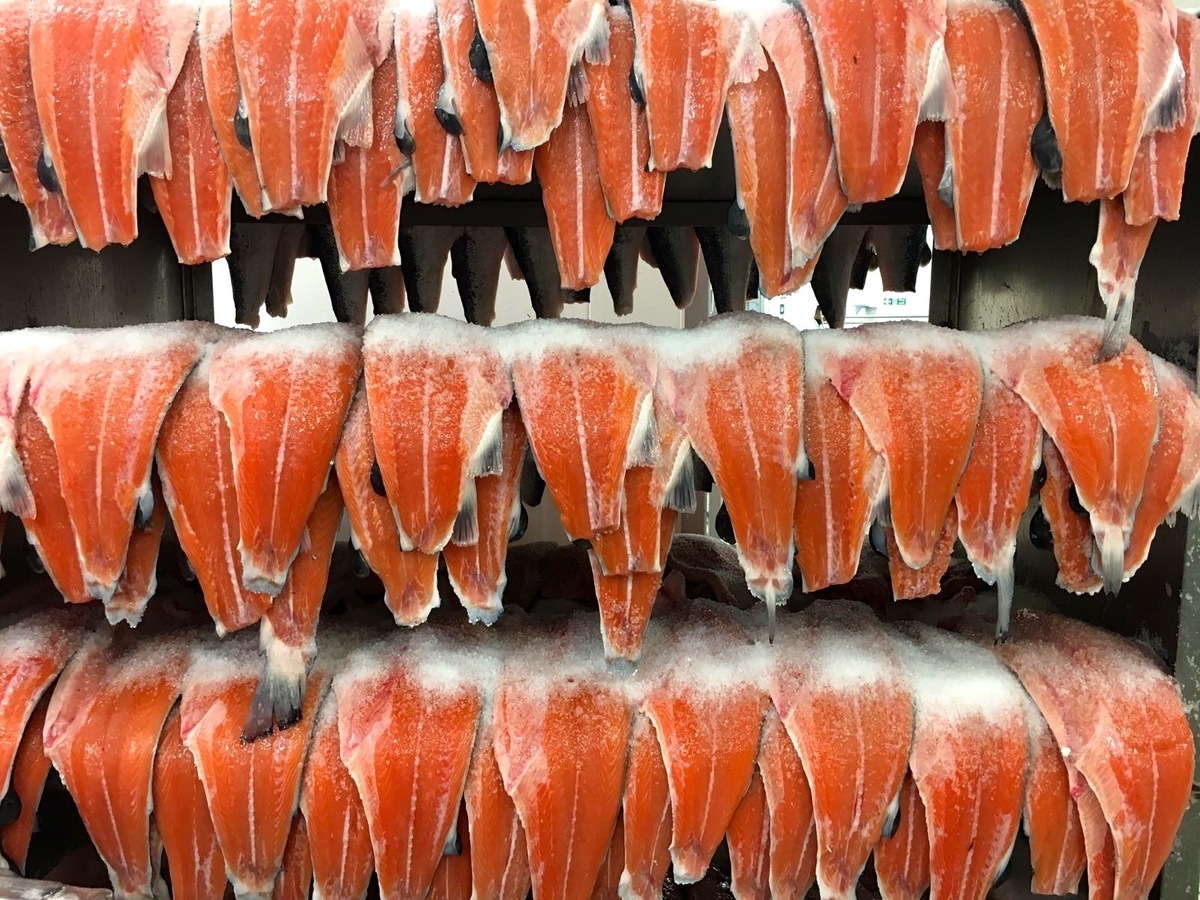 Fillets of salmon, salted and smoked by H. Forman & Son, are destined for the U.S. grocery chain Whole Foods.

Inside, 80 employees help fillet and salt salmon by hand, then hang the fish in giant smokers. It's the same method used by the company's founder, Harry Forman, 111 years ago.

"He was an Eastern European Jewish immigrant that fled the pogroms — he came from Ukraine — and settled in London's East End in the late 19th century," says his great-grandson Lance Forman.

Forman is the fourth-generation owner to run this small family business. And like many small businesses across the United Kingdom, he's trying to figure out how "Brexit" — a possible British withdrawal from the European Union — could affect his bottom line.

Britons go to the polls June 23 in a nationwide referendum on whether to stay in the EU or pull out and go it alone.

Debate Rages On Both Sides Before UK Vote On EU Exit

While big banks and corporations have lobbying teams involved in the rival "In" and "Out" campaigns, and employ research divisions to help them prepare for a possible change, small businesses are scrambling to figure out how a Brexit could affect them and what value EU membership brings to their business.

But it's difficult to calculate. Some small businesses were founded after Britain entered the European Economic Community, then known as the Common Market, in 1973. Or they may use technology that wasn't around before then. Others have watched warily as that economic union grew into a political union — the European Union — with its own diplomats, fiscal policy and greatly expanded regulatory environment. It's different from what the U.K. originally signed up to, they say.

That's Forman's view. He plans to vote to leave the EU. 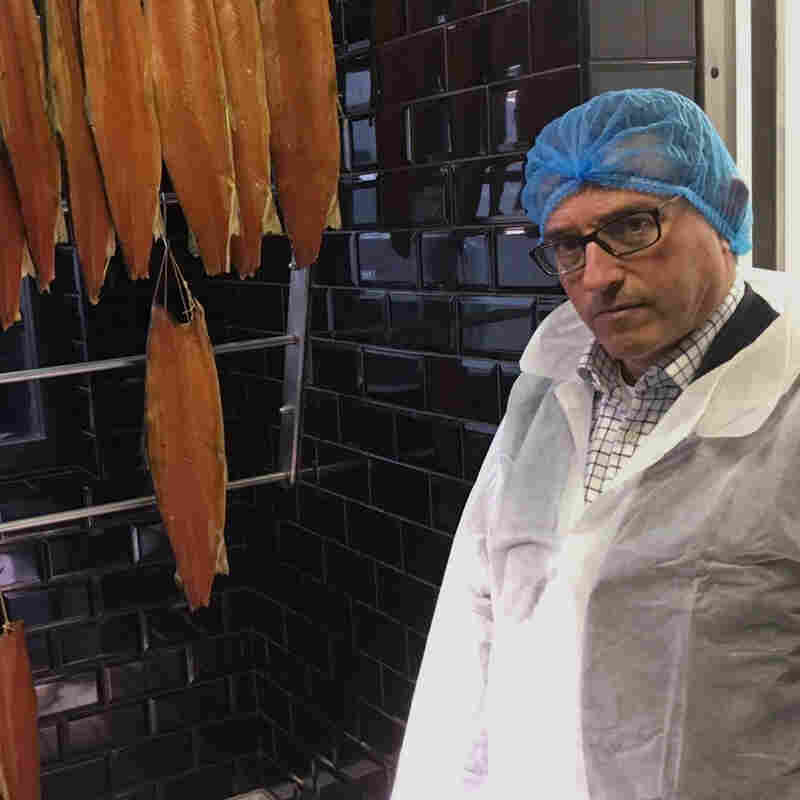 "I think we need to be that first domino to fall," says Lance Forman, owner of H. Forman & Son, a salmon smoking company in East London. Lauren Frayer/NPR hide caption 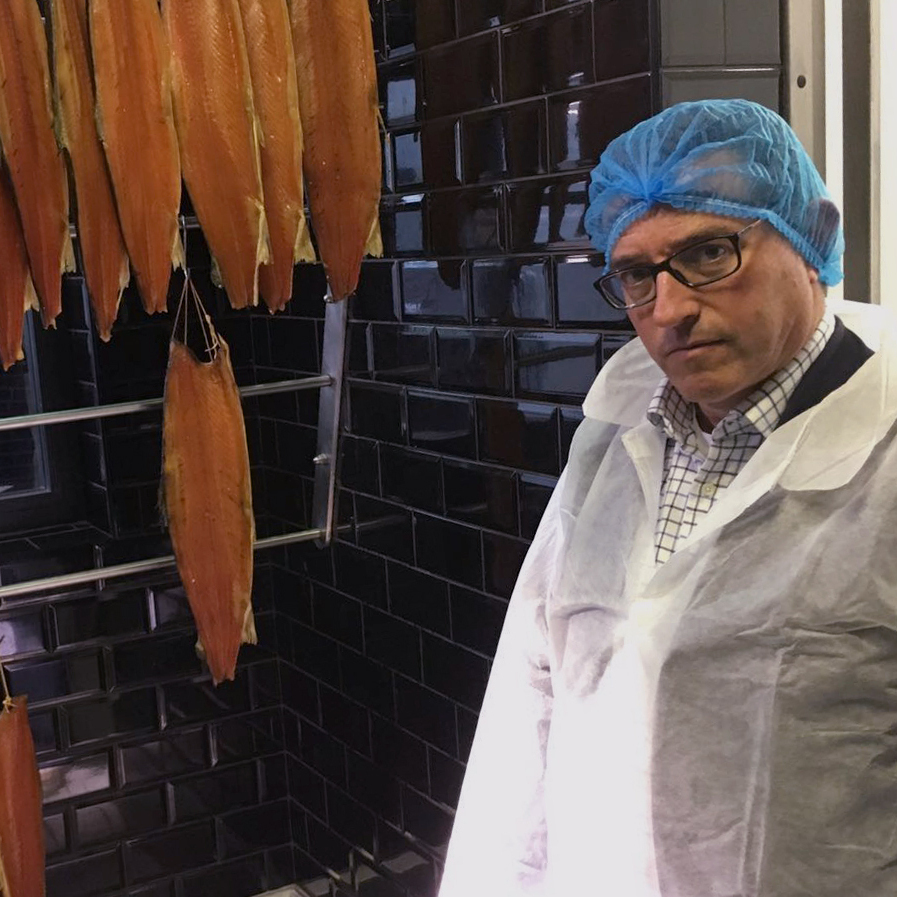 "I think we need to be that first domino to fall," says Lance Forman, owner of H. Forman & Son, a salmon smoking company in East London.

"I travel to Europe, I have very good friends across Europe," Forman says. "That's not what this is about. It's about the organization, which has become too powerful, undemocratic and corrupt, in fact, in many cases. It just needs to go."

He's had to comply with EU regulations that he calls ridiculous. For example, he says he spent thousands of dollars last year on EU-compliant packaging — to label his smoked salmon as containing fish, for people who have allergies. And he says he wasn't allowed to extend his new factory wing to the edge of a nearby canal because EU rules required him to leave space for certain insects and other wildlife that mate in those wetlands.

The House of Commons estimated in 2010 that as many as half of Britain's laws and regulations are influenced by the EU in Brussels. Forman says this has diluted British identity.

"People need to feel their culture and their patriotism and their nationality. You're losing that, and people are resenting that now," he says. "The economics don't work, the [euro] single currency doesn't work. I think we need to be that first domino to fall."

But economists say that if Britain leaves the EU, it's the British economy that will falter.

"Overall, U.K. GDP would go down by 5 percent," warns Thomas Sampson, an international trade expert at the London School of Economics and co-author of a recent report on the consequences of leaving the EU. "That would be a reduction in GDP per household of about $5,000, and it would mean that the activity of the average small business — sales of the average small business — would be hit by 5 percent, too."

The prime minister, the Bank of England, the IMF, the OECD — lots of big financial institutions — all predict economic losses from a possible Brexit. But opinion polls show Britons are nevertheless divided roughly evenly on the issue.

"I think their view is, 'Well, there may be an economic cost, but that's a price we're willing to pay to regain what we see is our lost national sovereignty,' " Sampson says. "A lot of the debate in the U.K. is about this economics versus political sovereignty trade-off."

Back in his smokehouse, Forman says he has reassured his EU employees that he'll lobby to keep them, no matter what happens in June's vote. Many of them are from Eastern Europe — just like his great-grandfather, the company's founder. They're allowed to live and work in the U.K. because it's a member of the EU, and the prospect of that changing worries them, Forman says. 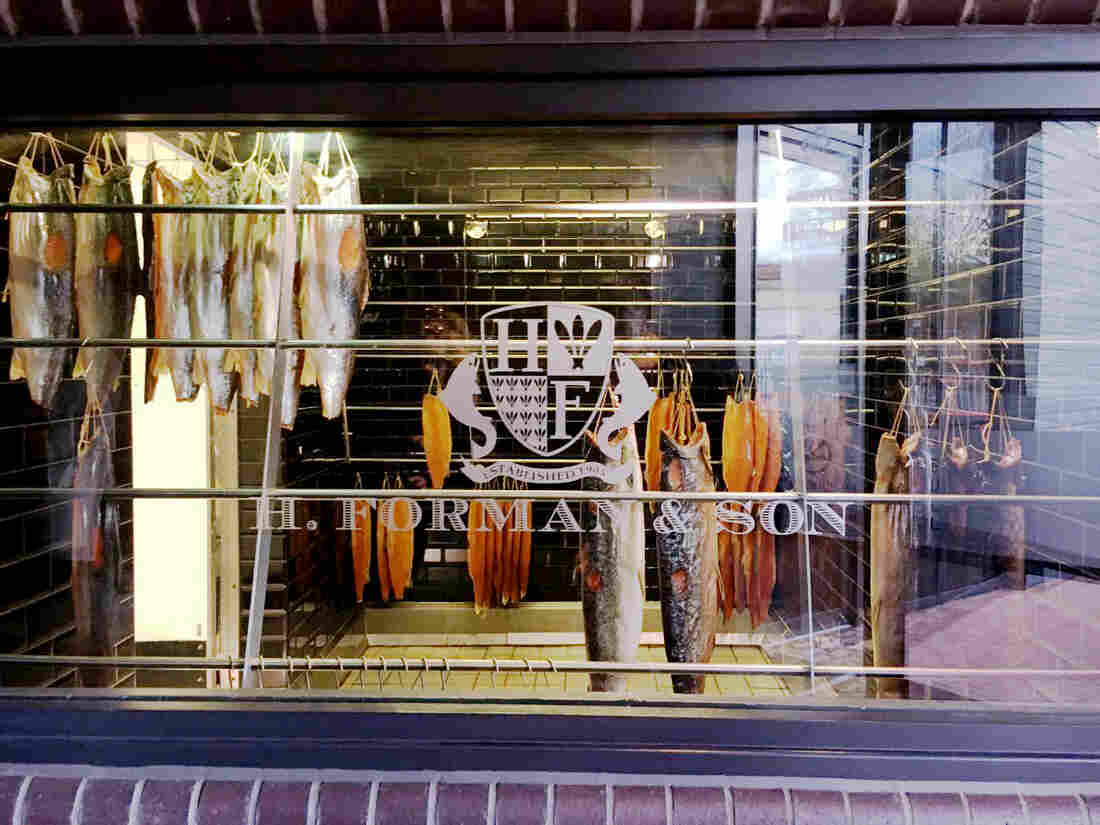 Fillets of smoked salmon hang in the smokehouse of H. Forman & Son, founded in 1905. Its owner, Lance Forman, says he'll vote to leave the EU despite the risks it poses to his bottom line. Rich Preston/NPR hide caption 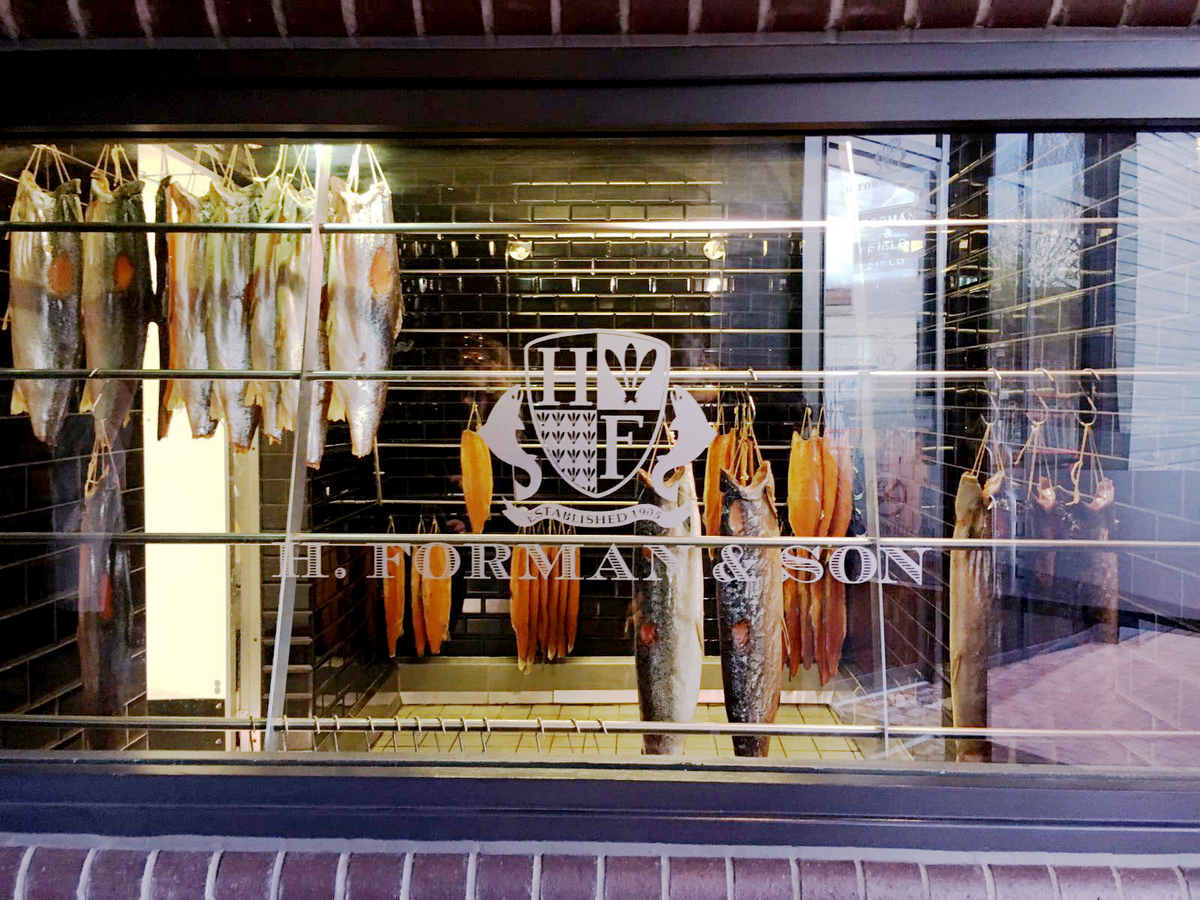 Fillets of smoked salmon hang in the smokehouse of H. Forman & Son, founded in 1905. Its owner, Lance Forman, says he'll vote to leave the EU despite the risks it poses to his bottom line.

Roughly half of U.K. trade is with the EU — and that could be hurt. But Forman wants to expand his sales elsewhere.

"Whole Foods is a big American customer of ours," he says of the upscale U.S. grocery chain.

Through his website, Forman sells directly to customers worldwide, and he says he doesn't need Brussels to negotiate a trade deal for him. He currently has to pay customs duties when he ships salmon to places outside the EU. And if the vote goes his way in June, he may have to pay to send his fish to Europe, too.

But that, he says, is a price he's willing to pay to restore British sovereignty — even if it ends up hurting his own bottom line.