Accessibility links
London's Popular And Populist Mayor Makes The Case For Leaving The EU : Parallels Ahead of a vote, a wild-haired populist has split conservatives. Born rich, he vows to fight for the working class. He points out Obama's Kenyan roots. He's not Trump. He's London Mayor Boris Johnson. 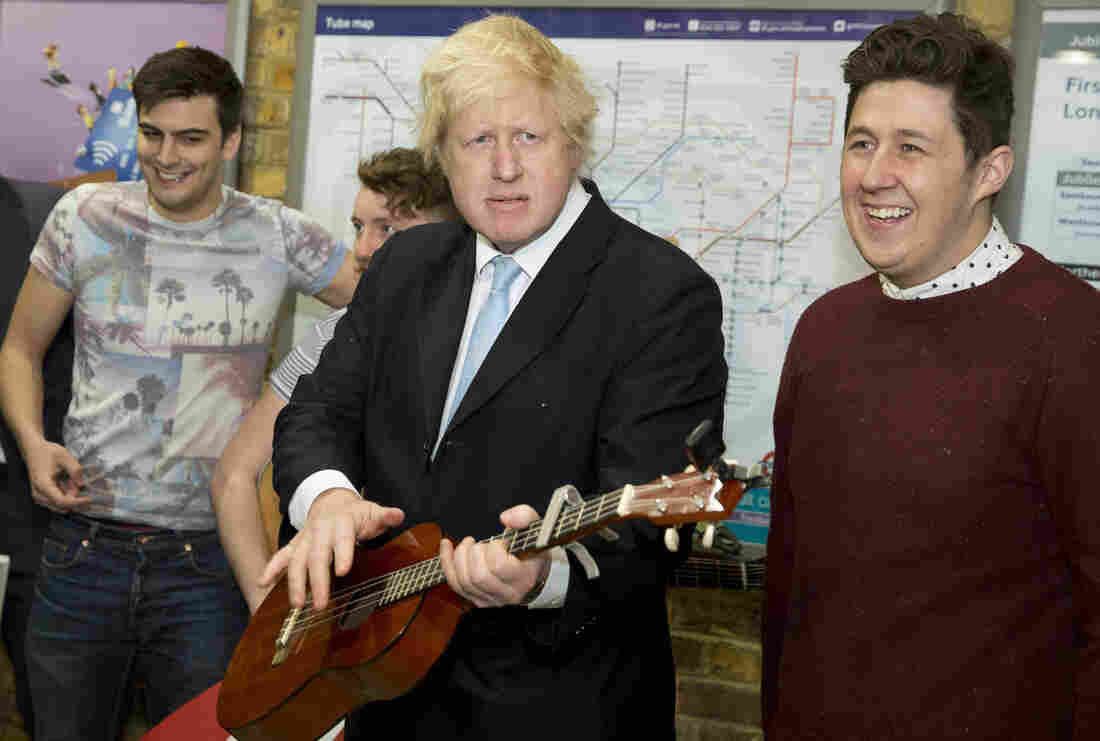 London Mayor Boris Johnson plays a guitar at an event to promote street performances in the city in March 2015. Johnson has broken ranks with Prime Minister David Cameron, a fellow Conservative Party member, by calling for Britain to leave the European Union. Alastair Grant/AP hide caption 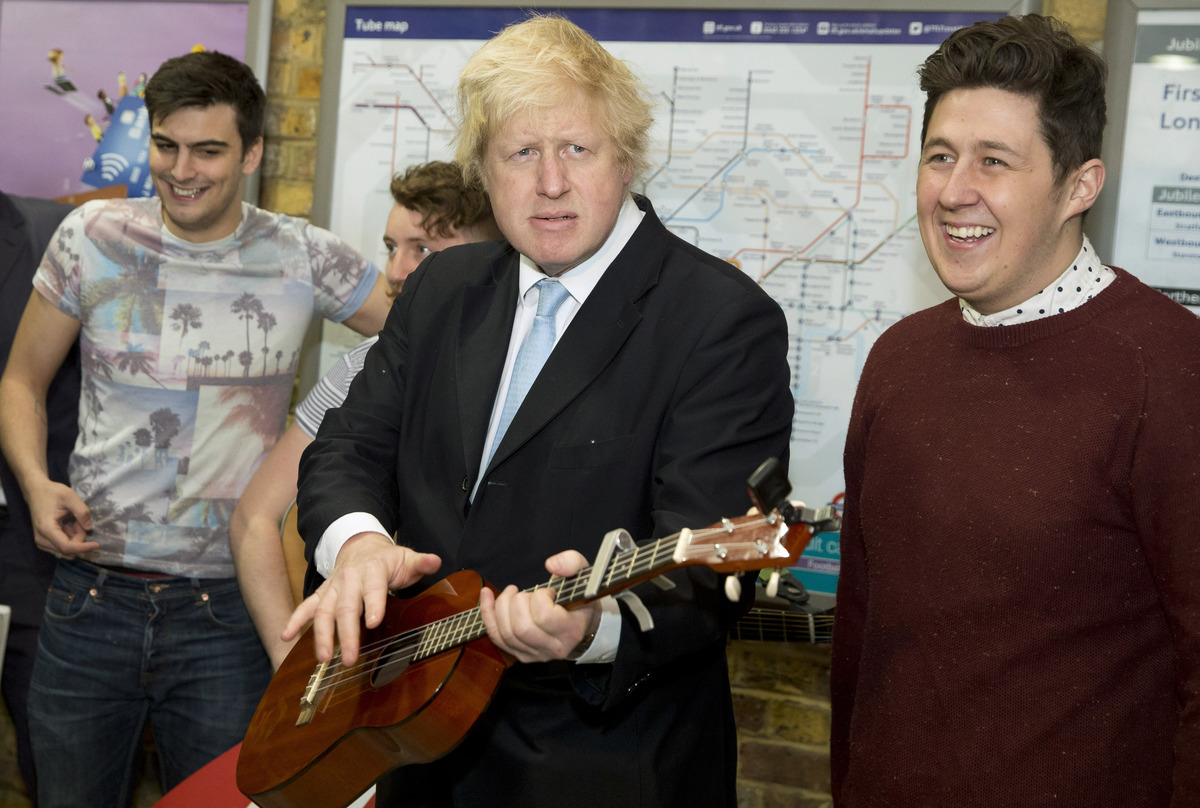 London Mayor Boris Johnson plays a guitar at an event to promote street performances in the city in March 2015. Johnson has broken ranks with Prime Minister David Cameron, a fellow Conservative Party member, by calling for Britain to leave the European Union.

A crazy-haired populist born in New York is splitting his conservative party ahead of a hotly contested vote. He's wealthy but appeals to working-class voters. He's keen to point out President Obama's Kenyan roots. Lots of people call him by his first name only.

And he's not Donald Trump.

"He's got a bit of a caricature look," says London commuter Karen Gilchrist, referring to the mayor's signature mop of white-blond hair. "He does seem to be engaged with his city. But also, he does have a habit of putting his foot in it," she says with a laugh. "A little bit akin to Donald Trump, probably."

On a recent day, Gilchrist was renting one of the so-called "Boris bikes" at a municipal bike kiosk on the edge of the River Thames. London's self-service, public bike-share scheme is nicknamed for Johnson, a bicycle enthusiast who presided over its 2010 launch, though it was in the works before he took office.

Johnson leaves the mayor's office this week, after two terms in office. He's still a member of Britain's Parliament, in the Conservative Party.

But he's broken with the party's leader and sitting prime minister, David Cameron, his old college buddy, to become a leader of the campaign for Britain to leave the European Union. As such, he took issue with Obama when he visited London last month and urged Britons to vote to stay in.

"I'm a big fan of Barack Obama, but clearly we have a disagreement," Johnson told reporters. "And I do think it's perverse that we're being urged by the United States to embroil ourselves ever more deeply in a system ... when the United States wouldn't dream of subjugating itself."

Johnson accused Obama of meddling, and wrote in a tabloid newspaper column that Obama dislikes Britain because of his Kenyan ancestry.

Obama is widely beloved in Britain, and within days, Johnson's E.U. exit campaign took a hit in the polls.

But Johnson himself remains one of the most-liked politicians in Britain.

"He makes us laugh," says Mark Lenaghan, a construction worker on a cigarette break in central London. "Well, [he's] a bit of a clown, really."

A clown who's willing to make a fool of himself to promote his city, something Lenaghan says he finds endearing.

During the 2012 London Olympics, Boris got stuck on a zip line over East London. He was left dangling 20 feet off the ground in a hard hat and harness, waving a Union Jack in each hand.

"Get me a ladder!" he joked to passersby below, waving his flags and smiling for photos.

Despite such antics — or perhaps because of them — Johnson remains an extremely popular figure in London. There's always been speculation about him having larger, nationwide political aspirations, about which he once famously said: "My chances of being prime minister are about as good as the chances of finding Elvis on Mars."

But many believe now might be the time, and that Johnson hopes to succeed David Cameron as Conservative Party leader, and prime minister. Cameron has said he will step down as party leader ahead of the next elections, currently expected in 2020.

The challenge for Johnson, says his biographer Andrew Gimson, would be to turn his goofy charisma into national poll numbers.

Unlike Trump, Johnson is not anti-establishment. He is the establishment — educated at Eton and Oxford, alongside Cameron, although they disagree on Britain's place in Europe.

Johnson is gambling his political future on the E.U. referendum in June. If the vote goes his way, he could someday replace his old classmate.

In the audio of this story, Boris Johnson is incorrectly referred to as the "lord mayor" of London, but he actually holds a different post. The lord mayor is the symbolic head of the much smaller (and ancient) heart of London, known as "The City," which now encompasses the financial and business district. Until Johnson steps down on May 5, he has the simple title of "mayor of London," a more political post responsible for the strategic governance of the entire British capital, usually referred to as "Greater London."