Accessibility links
Saudi Arabia's Surprisingly Assertive 80-Year-Old King : Parallels In just over a year, King Salman has decreed plans for major economic reform, launched a more assertive foreign policy and set a line of succession that could guide the kingdom for decades to come. 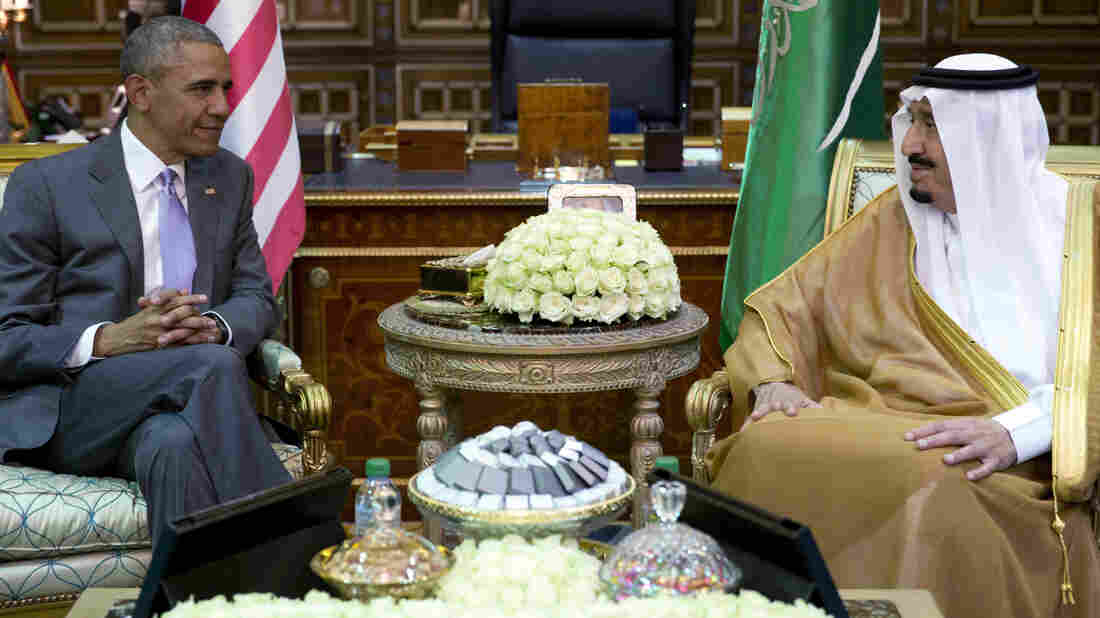 President Obama and Saudi Arabia's King Salman meet in Riyadh, Saudi Arabia, on April 20. Salman, 80, has been far more assertive on foreign policy than many expected. The U.S. and Saudi Arabia have had differences on issues such as dealing with Iran and fighting the Islamic State. The king announced a restructuring of the government on Saturday. Carolyn Kaster/AP hide caption 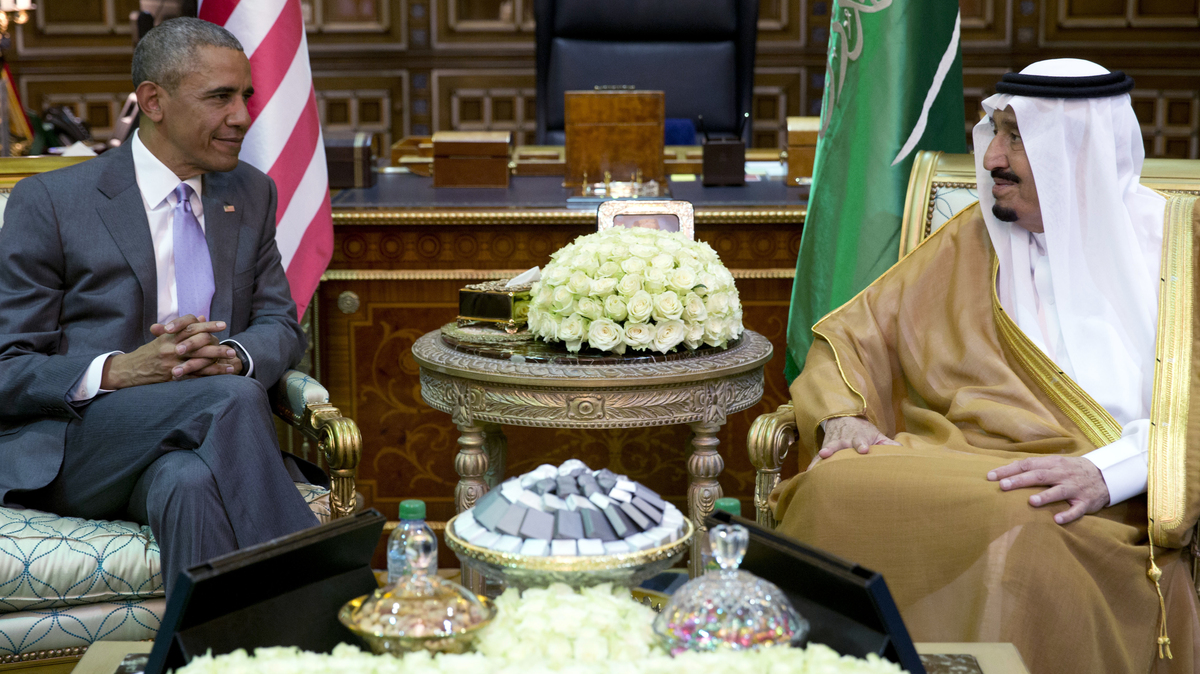 President Obama and Saudi Arabia's King Salman meet in Riyadh, Saudi Arabia, on April 20. Salman, 80, has been far more assertive on foreign policy than many expected. The U.S. and Saudi Arabia have had differences on issues such as dealing with Iran and fighting the Islamic State. The king announced a restructuring of the government on Saturday.

When King Salman assumed the throne in Saudi Arabia last year, he was pushing 80, his health was questionable and many thought he would be more a caretaker than a monarch of note.

Yet Salman has unleashed major initiatives and shaken up the kingdom, setting a course for change in a land where the watchwords have long been tradition, stability and continuity.

The king's latest surprise came Saturday with a broad government reshuffle. It included the ouster of the oil minister, Ali al-Naimi, who had served for two decades and was perhaps the most influential person in the global oil industry.

Many believe the driving force behind these changes is the king's son, Mohammed bin Salman, who is around age 30 and serves as both the deputy crown prince and the defense minister.

While the king is a rare public speaker, Mohammed has given lengthy interviews, including a five-hour discussion in January with The Economist, where he described the country he wants to see:

None of this has happened yet, but moves have been striking. The kingdom's leadership has been reshaped, possibly for decades to come. There's a major push to diversify the one-note economy built on oil. And the Saudis have declared a more assertive foreign policy at a time when much of the Arab world is in chaos.

The king's decrees on Saturday also named a new head of the central bank and several other government departments and restructured a number of government ministries.

He even created a General Authority for Entertainment, which immediately prompted a snarky response on social media given the kingdom's historic restrictions on most every form of leisure, including a ban on movie theaters.

The king's moves did not alter the political structure, where the monarch has absolute authority. 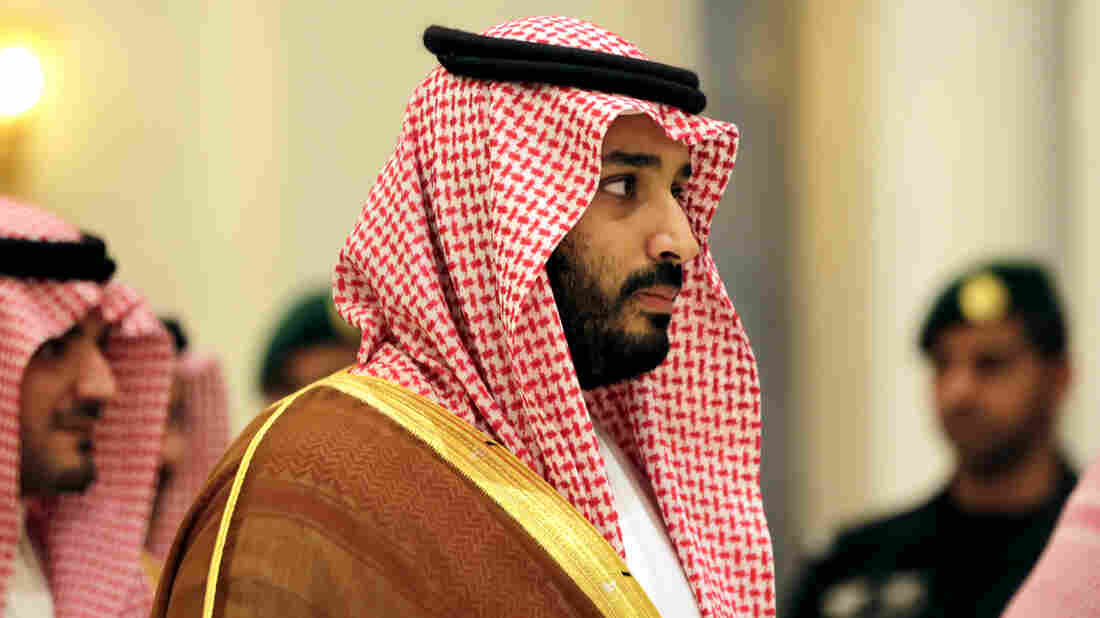 Saudi Arabian Deputy Crown Prince Mohammed bin Salman attends a summit of Arab and Latin American leaders in Riyadh on Nov. 11. Mohammed, who is about 30, is the son of King Salman and a key figure in the changes that have been introduced over the past year. Hasan Jamali/AP hide caption 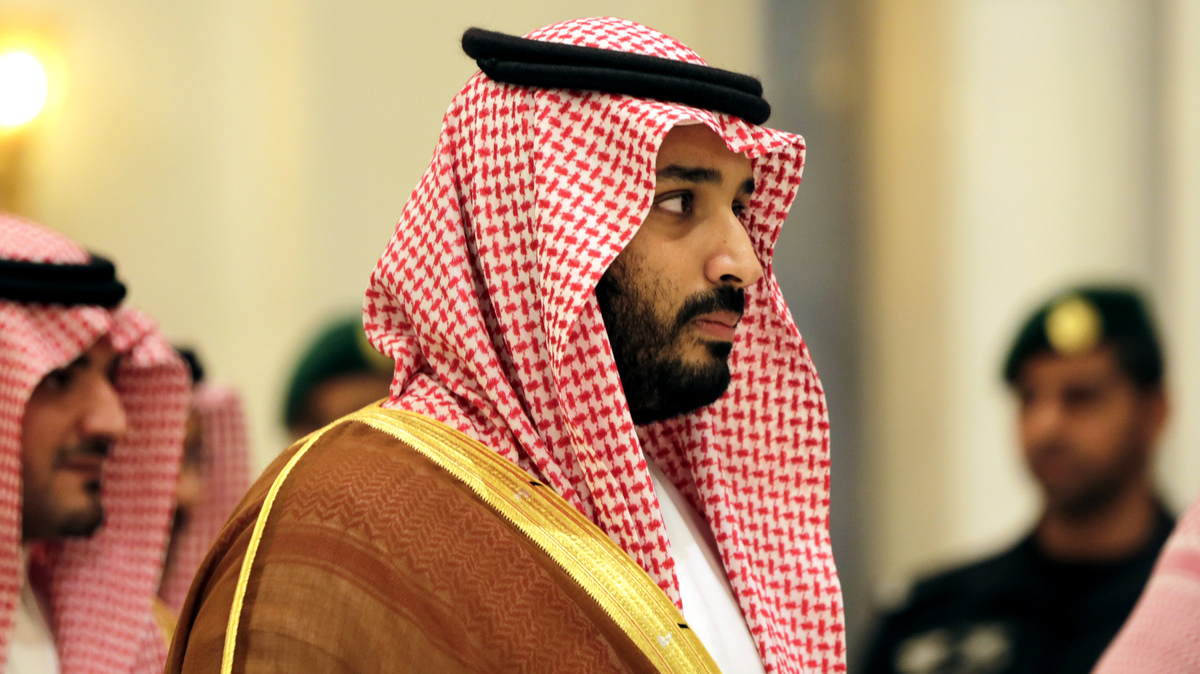 Saudi Arabian Deputy Crown Prince Mohammed bin Salman attends a summit of Arab and Latin American leaders in Riyadh on Nov. 11. Mohammed, who is about 30, is the son of King Salman and a key figure in the changes that have been introduced over the past year.

There will be challenges on multiple fronts. The religious establishment is certain to raise objections. A population accustomed to cushy subsidies will have to adapt to fewer benefits. The country's human rights record is widely criticized, as are the lack of democracy and the many restrictions placed on women.

But with a youthful population that's growing fast, Saudi Arabia can no longer rely solely on oil revenue, according to economists.

Here's a look at the major moves the king has introduced since he came to power following the death of King Abdullah in January 2015:

The Line Of Succession: Regardless of how long his health holds, King Salman has shaped the monarchy for many years to come. He is the sixth son of King Abdulaziz, Saudi Arabia's founder, to assume the throne, and he is set to be the last now that all of the surviving sons are elderly.

Shortly after he took over, Salman moved the line of succession to the next generation by naming his nephew, Mohammed bin Nayef, 56, as crown prince, and his son Mohammed as deputy crown prince.

Assuming all goes to plan, the kingdom's leadership could be set for the next half-century and this could be Salman's most significant legacy.

Bombing Campaign In Yemen: The king has dramatically overturned the Saudi reputation as a quiet, behind-the-scenes player with his air war against the Houthi rebels in neighboring Yemen.

The Saudis are worried about the turmoil on their southern frontier and say archrival Iran is backing the Houthis, who remain the strongest force in Yemen's turbulent civil war.

The Saudi campaign has not gone well. There's a shaky truce at present and peace talks are taking place in Kuwait. But no solution appears imminent in Yemen. Whatever the outcome, the king has demonstrated his willingness to undertake a major military operation beyond the Saudi borders.

More Assertive With The U.S.: The close alliance dating back decades is now marked by increased friction over how to deal with Iran — the Saudis strongly opposed the nuclear deal — and how to conduct the war against the Islamic State in Syria and Iran.

While U.S.-Saudi tensions predate Salman's ascension to the throne, they reflect the growing Saudi assertiveness and a rare display of opposition to U.S. policies.

The two countries still need each other but could be moving toward a very different relationship from the one they've had for decades.

Confrontation With Iran: The Saudi-Iran rivalry has intensified in the past year with the region's proxy wars that feature Saudi support for Sunni Muslims and Iranian backing for Shiite Muslims.

The two countries broke off diplomatic relations in January after the Saudis executed a prominent Shiite cleric, Nimr al-Nimr, a Saudi citizen convicted at home of terrorism charges. Iranian protesters stormed the Saudi Embassy in Tehran, which led to bitter recriminations.

The Saudi-Iranian fault line is playing out across the region, with the Saudis feeling the Obama administration is more interested in reaching out to Iran than in siding with longtime allies.

Reshaping The Economy: The Saudis have never made much progress in diversifying their economy, despite several previous attempts.

But in the most ambitious plan ever announced, Saudi Vision 2030 was unveiled last month. The goal is to turn the state oil company, Aramco, into a conglomerate active in a much broader range of industries.

Still, this is a long-term project. For now, the Saudis depend on oil.

A key player will be the new oil minister, Khalid al-Falih, 55, a technocrat who attended Texas A&M and has served as the chairman of Aramco. He assumes the post at a time when world oil prices have been depressed for nearly two years and were running at around $44 a barrel on Monday.

In his initial comments, Falih sought to reassure markets.

"Saudi Arabia will maintain its stable petroleum policies," he said in a statement on Sunday. "We remain committed to maintaining our role in international energy markets and strengthening our position as the world's most reliable supplier of energy."

Perhaps so. But most everything else in Saudi Arabia seems unpredictable these days.