Accessibility links
In India, Eco-Friendly Cremation Is Easy — But It's A Tough Sell : Parallels Is it possible to shrink the carbon footprint of the dead? An organization wants to persuade Indians to adopt "green" cremations and make an important Hindu death rite more environmentally friendly. 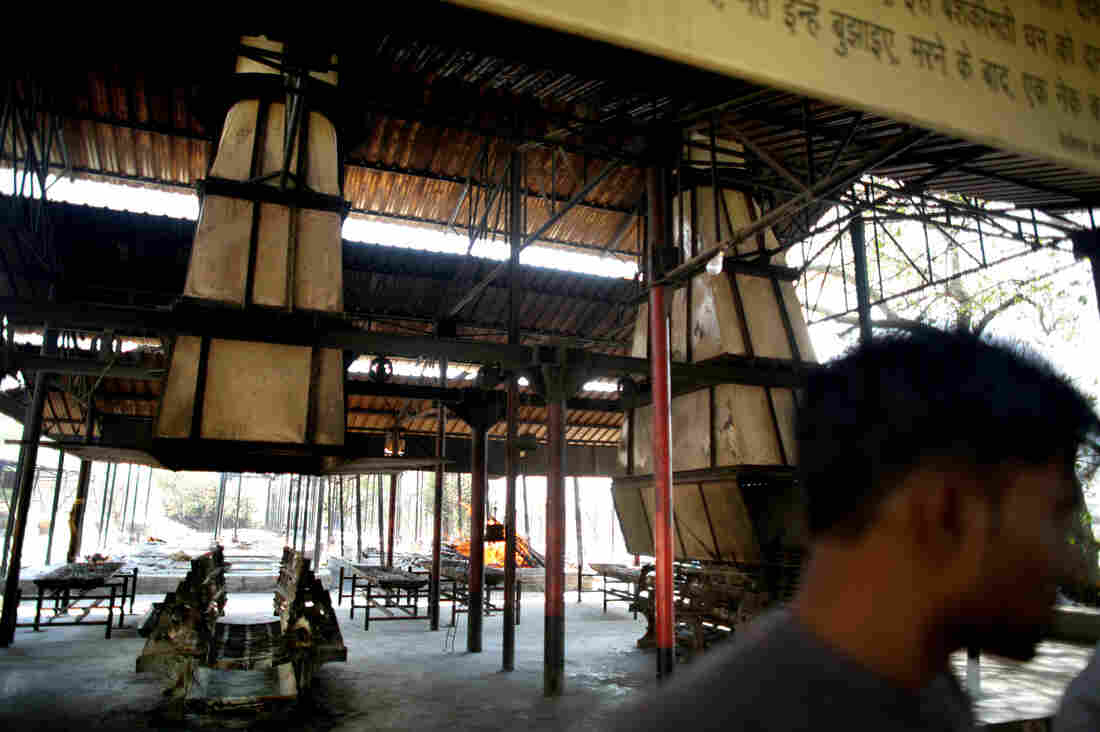 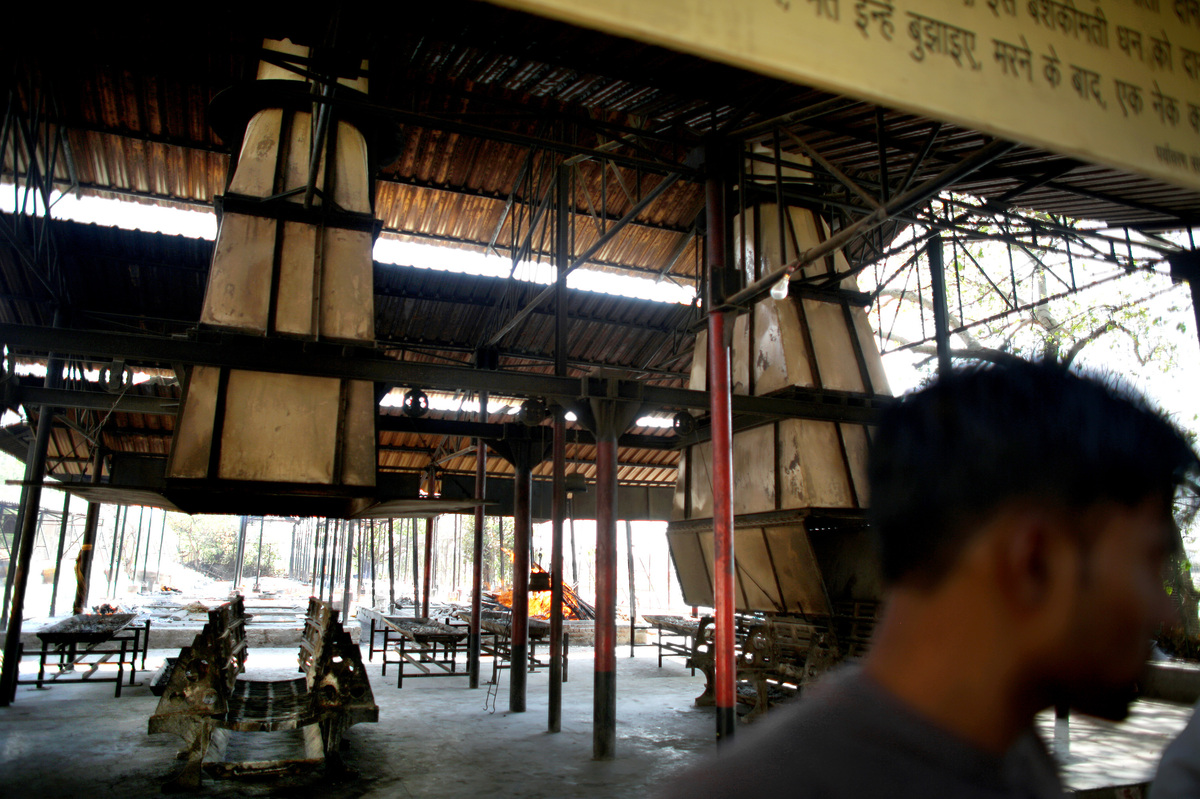 We hear a lot about the size of a person's carbon footprint — how much they use electricity, drive a car, fly on airplanes.

In India, some people are trying to shrink the carbon footprints of the dead.

At least 20 times a day, Braj Kishore Pandey sings a mantra as he lays a human body on a pile of firewood to burn. "There is a request from god for the freedom for the release of the soul, and also for the happiness for the family," he says.

Pandey operates an open-air crematorium by a riverbank outside New Delhi. He's wiry, with bright-white teeth and a glossy black mustache — and obviously proud of his job. He oversees 40 concrete platforms here.

On one, a skeletal shape lies in a pile of smoldering embers. The roof of the skull is broken. That's part of the Hindu cremation ritual. At another platform, a crowd of about 30 men surrounds a body on a blazing pillar of logs.

Each traditional cremation consumes nearly 900 pounds of wood. Ashes float like snowflakes through the shimmering heat.

At left, a ring of traditional flowers is all that is left in a pan used to catch the ashes from a "green" cremation outside New Delhi. Crematorium operator Braj Kishore Pandey oversees both traditional and the new, eco-friendier cremations. David Gilkey/NPR hide caption

Jatan Singh is here to say goodbye to his oldest sister.

"According to the Hindu religion," he explains, "without fire, it's not possible for the soul to get complete freedom."

Off to the side of where his sister's remains are being consumed by fire, there is a towering stockpile of logs that have been delivered from the countryside.

"Everybody is looking for options of how to control pollution," she says.

Kesarwani works for Mokshda Green Cremation System, an organization that offers Indians a cleaner, more energy-efficient option at crematoriums like this one. But that can be a tough sell.

"Cremation is [an] ages-old tradition we are following," she says. "So making changes in this tradition is a difficult task for us."

Two of Mokshda's "green cremation" systems sit near the traditional platforms. Braj Kishore Pandey oversees these as well as the traditional pyres. The wood rests on a metal tray large enough to hold a human body. A sort of exhaust hood hangs overhead.

Burning a body this way uses a third as much wood as the traditional method. It takes two hours instead of three days. The Mokshda structure allows the pyre to burn hotter and faster with less fuel, concentrating the fire in the metal tray and releasing much less smoke into the air. 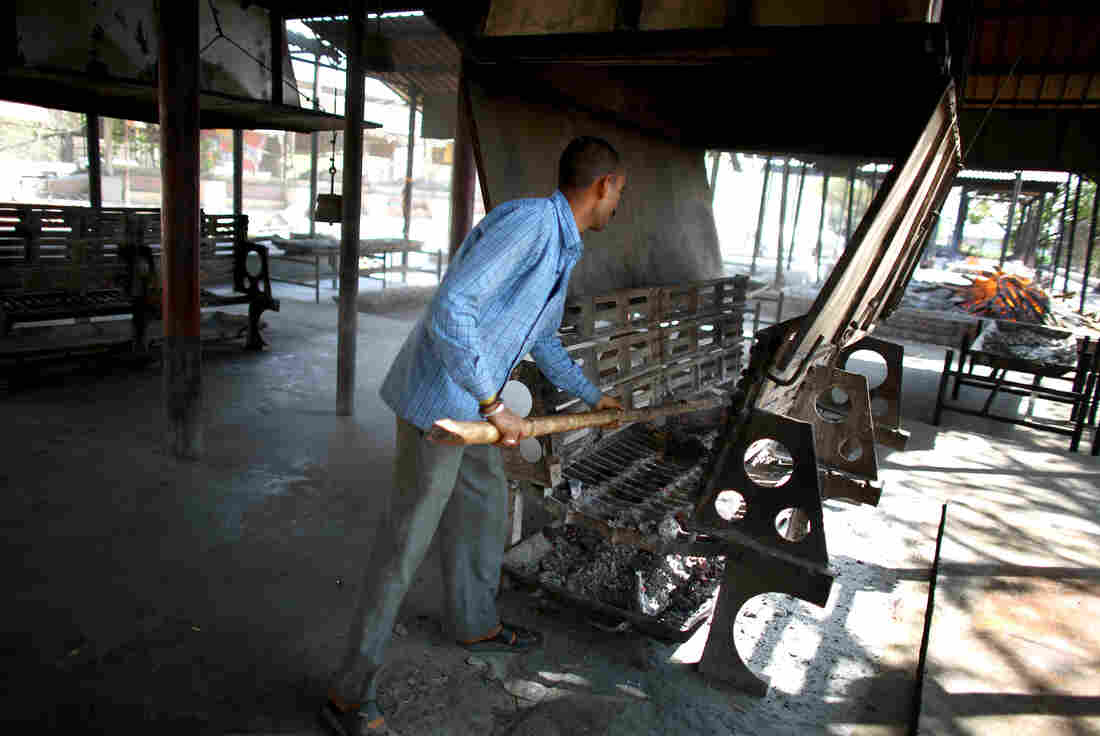 Braj Kishore Pandey, a crematorium operator, pushes ashes into a pan after a body was burned in a "green" cremations hearth. David Gilkey/NPR hide caption

I ask the mourner Jatan Singh why he chose the more traditional funeral pyre for his sister.

"The way we did it — on the ground — is for people who have families and relatives," he says. "This new system, that's for vagabonds. Unidentified bodies."

His response highlights a major challenge confronting Kesarwani: educating consumers who are reluctant to give up the old, traditional ways.

"The information was not properly transferred to him," she says. "This is what we are fighting right now. This is the challenge we are facing these days."

India is trying to become a highly developed nation without doing as much environmental damage as countries like the U.S. and China did when they were making this leap. To succeed, India will have to make huge changes in its energy policy, as well as small-scale changes in the way people go about their daily lives — and their deaths. 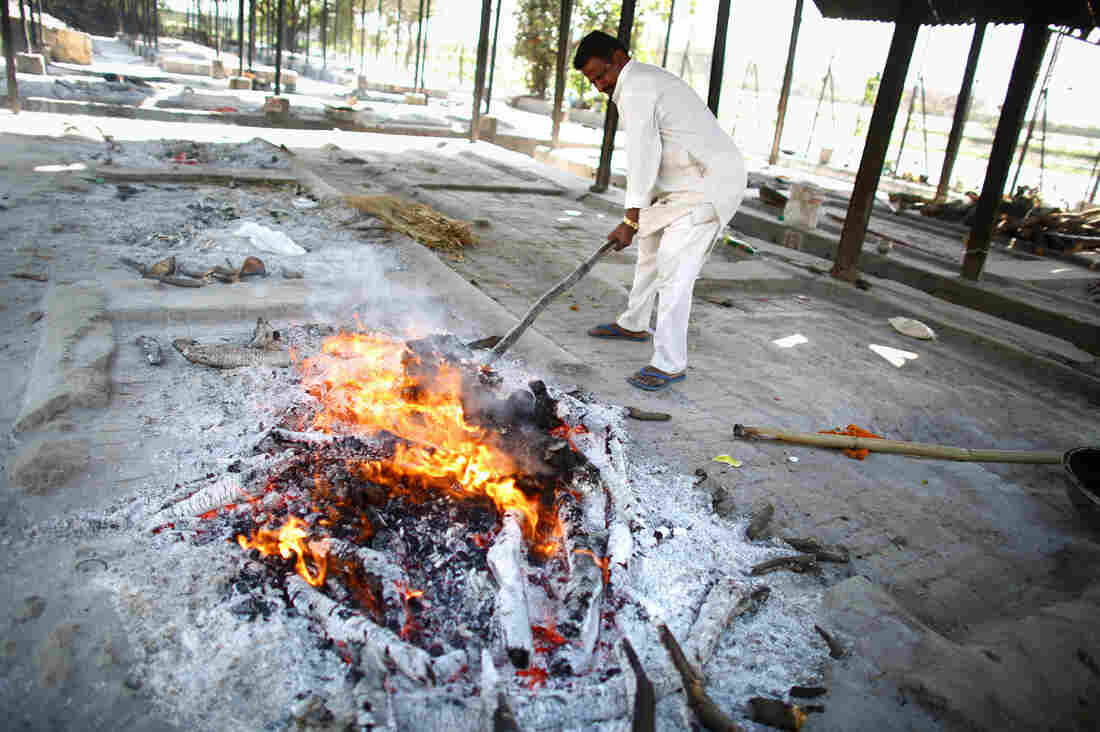 Each day, seven or eight bodies are burned on Pandey's green cremation platforms here; his traditional pyres burn twice as many.

Pandey breathes easier now. "By using [green cremation], people do not even get smoke in their eyes," he says.

He also appreciates that fewer trees are being cut down.

"If something can be done in a smaller amount," he says, "why do we need to spend a larger amount?"

There are some fully electric cremation systems in India that are even cleaner — they don't involve firewood at all.

But one step at a time. Centuries-old religious practices don't just transform overnight.