Accessibility links
ISIS Trial May Offer A Window Into How The Extremist Group Recruits : Parallels Three Somali-American men are on trial in Minneapolis for allegedly plotting to join the Islamic State. They are part of a larger case that involves six more young Muslims who already pleaded guilty. 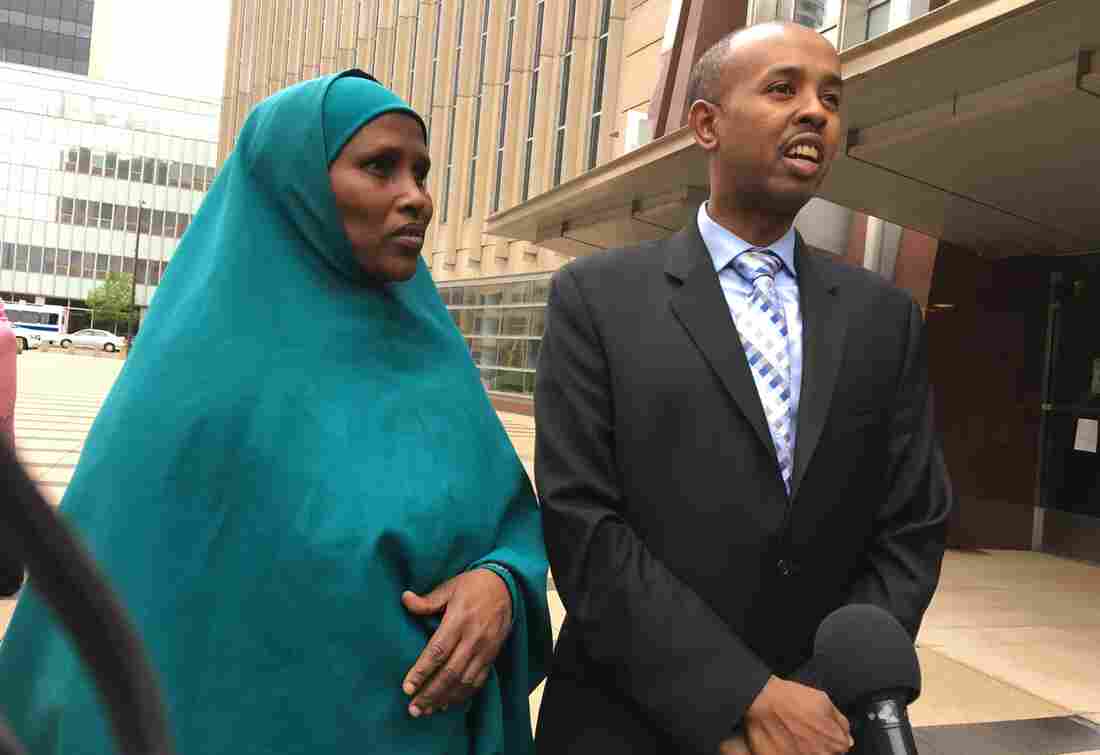 Three Somali-American men accused of plotting to join the Islamic State are on trial in Minneapolis. Fadumo Hussein (left) is the stepsister who reared one of the defendants, Guled Omar. She calls him her son and says, "we are not terrorists." Sadik Warfa (right) is a community leader in Minneapolis. Dina Temple-Raston/NPR hide caption 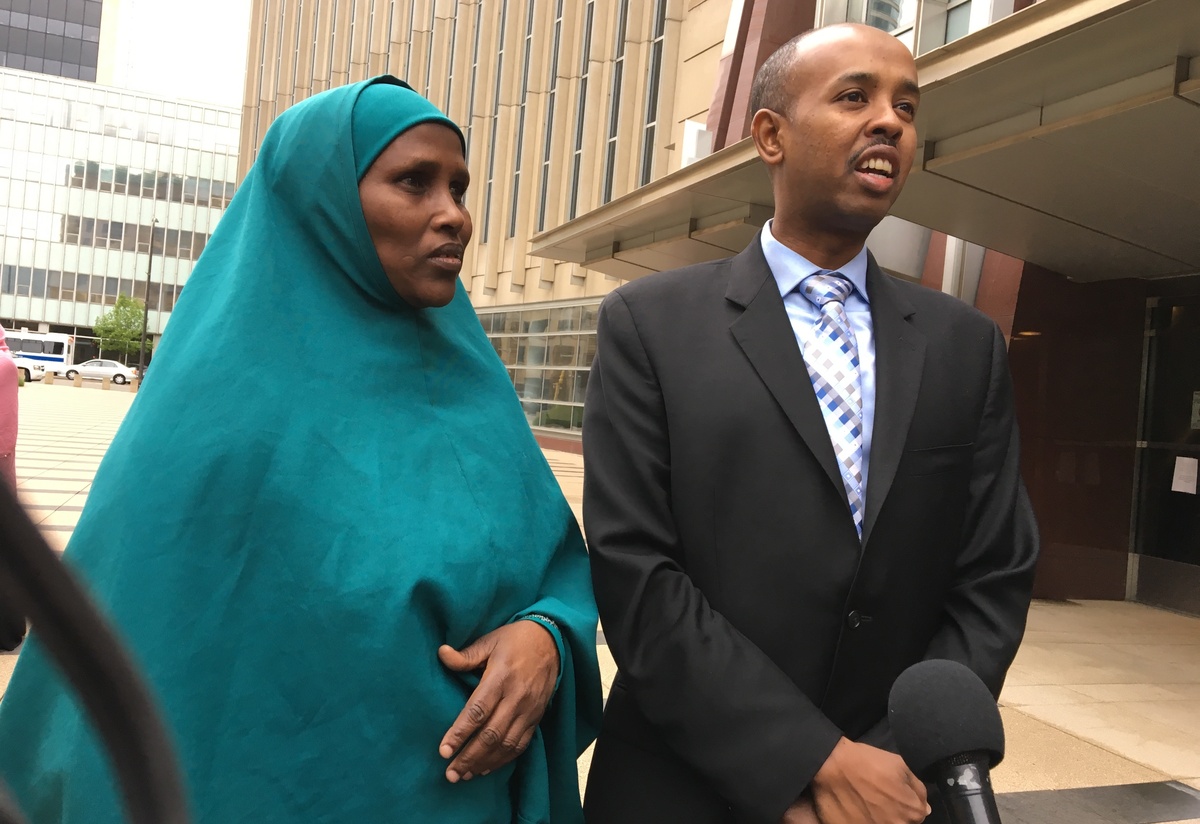 Three Somali-American men accused of plotting to join the Islamic State are on trial in Minneapolis. Fadumo Hussein (left) is the stepsister who reared one of the defendants, Guled Omar. She calls him her son and says, "we are not terrorists." Sadik Warfa (right) is a community leader in Minneapolis.

In a Minneapolis federal courtroom, three Somali-Americans are on trial for allegedly plotting to join the Islamic State in a case that's expected to offer the most detailed public accounts yet of how the extremist group recruited nearly a dozen young men from the Twin Cities.

Six Somali-Americans arrested in connection to the case have already pleaded guilty to conspiring to travel to Syria to join ISIS, making this the largest American investigation and trial related to ISIS since the terrorist group seized large parts of Syria and Iraq and declared a state nearly two years ago.

Nationwide, more than 80 Americans, mostly young Muslim men, have been arrested for seeking to join the group. Most of those arrested have said they were seduced by ISIS recruiters on social media. According to the FBI, some 200 Americans have traveled to Syria and a small fraction of those people have joined ISIS.

The Twin Cities area has been especially hard hit by these terrorist recruiters. This is home to the largest Somali community in the U.S., where there are many single-parent homes and high unemployment.

Nearly a decade ago, the Twin Cities were rocked by the departure of more than two dozen young men who flew to Somalia to join an al-Qaida arm there, called al-Shabab. The FBI says some of those young men now with al-Shabab persuaded friends and relatives in Minnesota to go to Syria to fight.

Prosecutors allege that the trio now on trial were part of a larger conspiracy that involved not just relatives fighting in Somalia, but high school and college friends who helped persuade each other to travel to Syria to join the terrorist group.

The FBI arrested the young men, all from the Twin Cities, last year after a yearlong investigation.

"It's terrorism and everyone's heard of that and everyone has certain thoughts about that," U.S. District Judge Michael Davis told prospective jurors when jury selection began Monday. "I need to know how you feel. This may not be the case for you to sit on."

Ten prospective jurors were dismissed after they told the judge that they had already made up their minds about the defendants. One woman said she had been following news coverage of the case and knew that six co-defendants had already taken plea deals. She said she thought the three men on the docket were probably guilty, too.

"When I first walked in, I already had the mind-set of them being guilty," she told the judge.

Another woman stood up a short time later. "To be honest," she told the judge, "I'm kind of uncomfortable being in the room with them."

She was quickly told she wouldn't have to serve on the jury.

On the first day of the trial, Judge Davis told more than half the people in a pool of 50 potential jurors that they would not be part of this case.

As one after another was dismissed, the three men on trial — Abdirahman Yasin Daud, 22, Mohamed Abdihamid Farah, 22, and Guled Ali Omar, 21 — hardly registered a reaction.

Most ISIS cases in the U.S. have involved one or two people who have contacted the group online and then tried to board flights that would eventually take them to Syria.

Prosecutors say Daud, Farah, Omar and the six others arrested met over the course of a year to talk about how they could get to Syria to join ISIS. The criminal complaint says the meetings began in March 2014.

According to the complaint, the men helped each other get passports and raided their college funds and savings accounts to get money for the group to travel.

The three on trial this week are charged with providing material support to ISIS, essentially offering themselves as fighters, and planning to commit murder outside the United States on behalf of the group. The latter charge is the most serious and carries the possibility of life in prison.

The Minneapolis case is the third ISIS-related case to go to trial in the U.S. Some of those who have already pleaded guilty in this case are expected to be called as witnesses. As a result, the trial is being closely watched because it could offer a rare public account of how ISIS recruits and radicalizes people in this country.

The six who have already pleaded guilty said they watched ISIS videos on YouTube together and came to the conclusion that it was their duty to protect fellow Muslims who were under attack by Syrian President Bashar Assad's regime.

The parents of the defendants have claimed their sons are innocent.

"All the negative things you hear outside, don't pay attention to them," Daud's mother, Farhiyo Mohamed, told reporters through an interpreter on Monday. "These are very young men who have their whole lives ahead of them."

Opening statements are expected to begin Wednesday, and the judge told jurors that he thought the trial would last about four weeks.