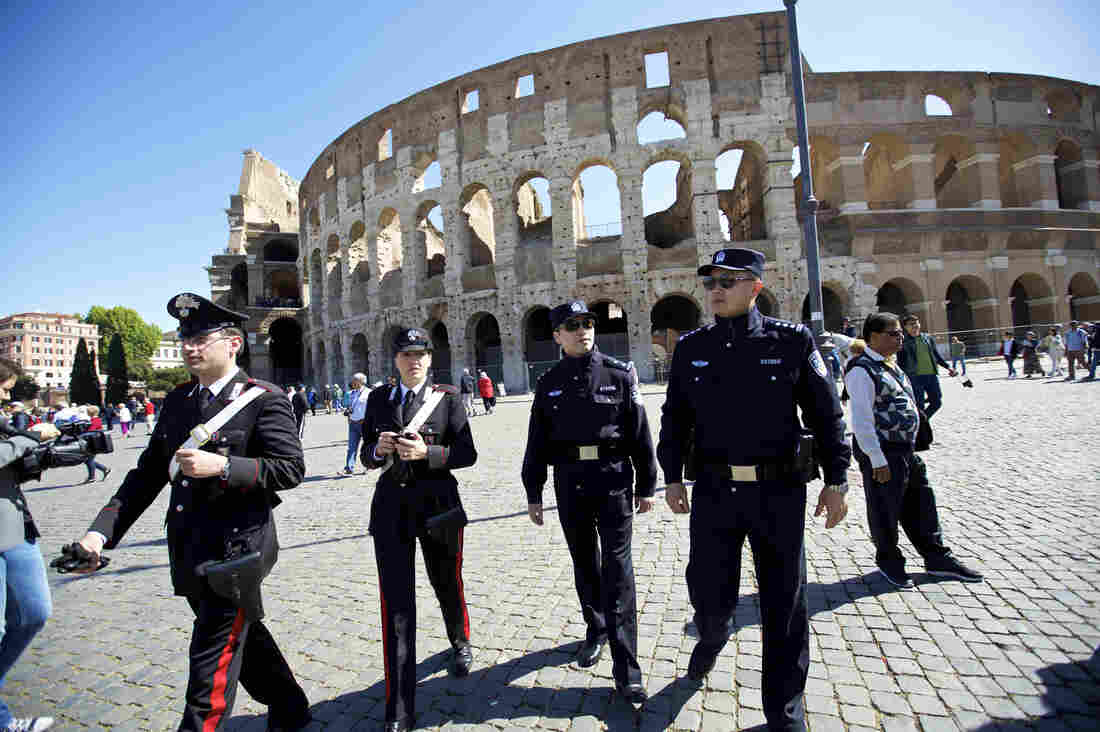 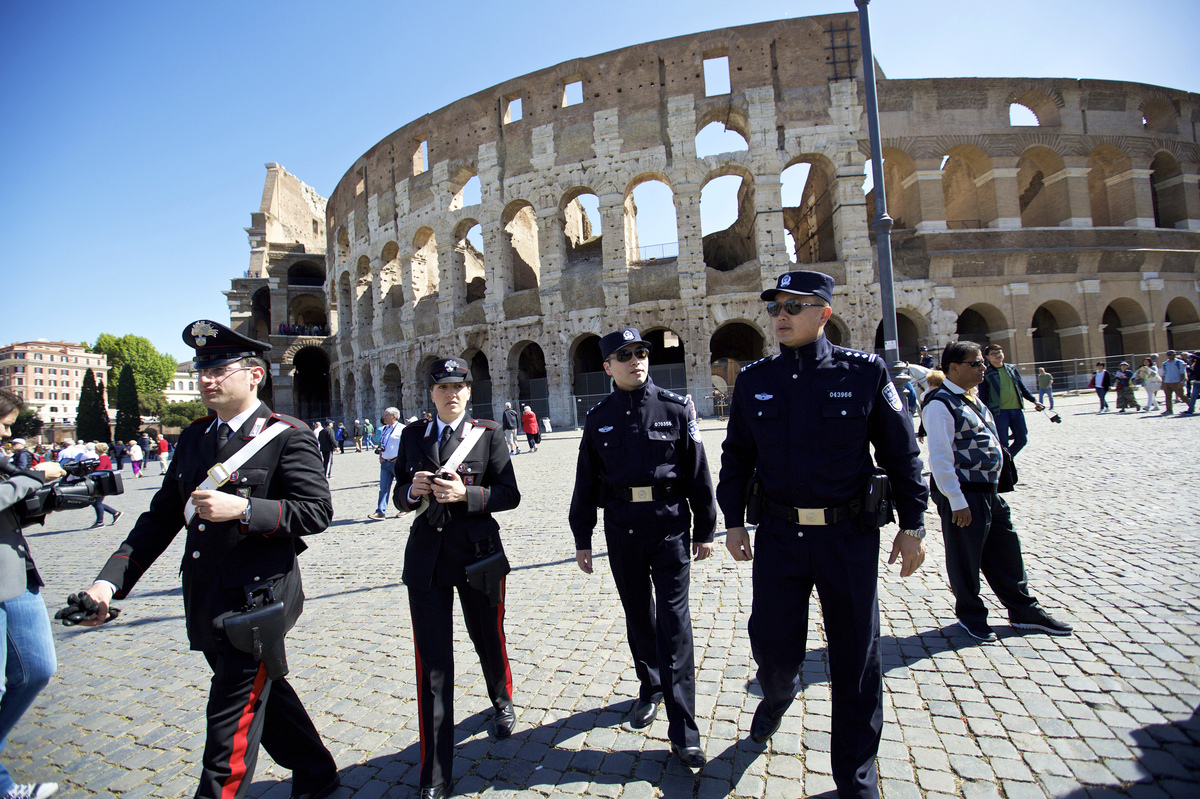 In Rome's vast Piazza del Popolo, two uniformed men try to help a German tourist with directions. And, as is all too common in Rome, instructions get lost in translation.

But it's the men's uniforms that leave the woman more perplexed. The cops assisting her are not Italian. They're Chinese.

They're part of an unprecedented experiment in which Italian and Chinese police are working together this month on joint patrols on the streets of Rome and Milan.

The aim is to assist Chinese tourists — some 3 million a year come to Italy.

Chinese tourism to Europe is growing rapidly. But following terrorist attacks in Paris and Brussels, Chinese travelers started feeling less at ease on the continent. Italy has become the first country to try to make Chinese tourists feel more secure.

But at the moment, those needing help are two distraught Belgians. One has just been pickpocketed at McDonald's.

"His wallet was stolen, many credit cards were inside, so he is calling the bank," explains Pang Bo, deputy director of the police bureau in the southern Chinese city Guangzhou.

He first visited Rome as a tourist 14 years ago, while serving as a peacekeeper in Bosnia. Today, he's very proud to be back and walking the beat here. He says Chinese tourists have welcomed the sight of cops like him from home. 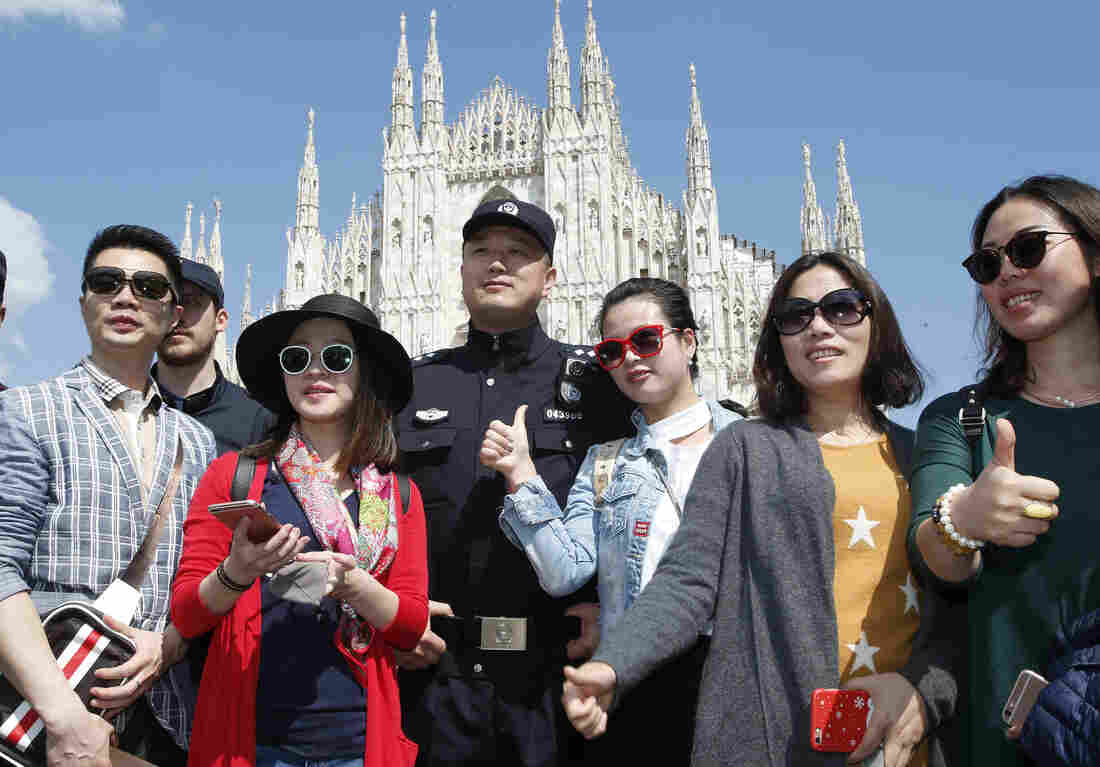 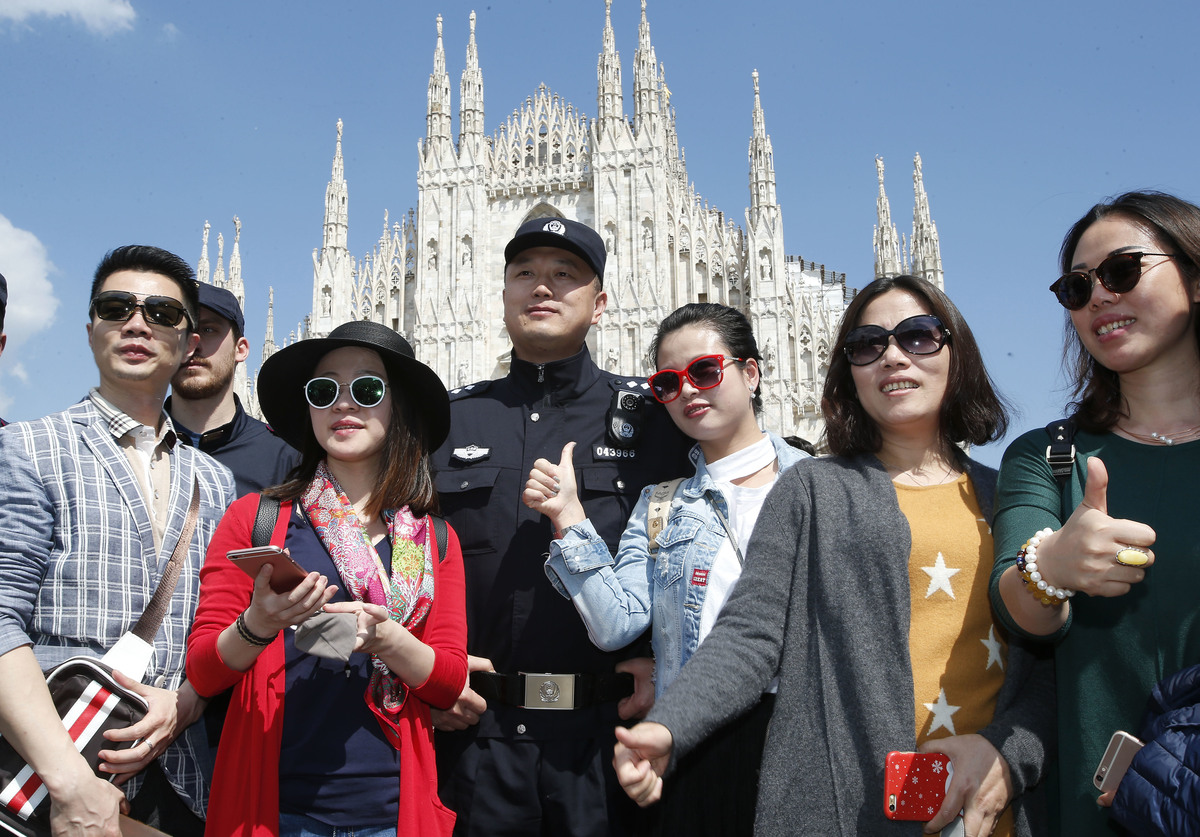 A Chinese police officer poses with Chinese tourists in front of Milan's cathedral on May 3. Chinese police are on patrol with Italian officers to help make Chinese visitors feel safer.

"When the Chinese tourists saw us, they were amazed, astonished, feel very happy and excited to see Chinese police here with Chinese police uniform," he says. "If I were them, I'd feel the same."

Switching to rudimentary Italian, Pang Bo suggests to his Italian partners that they move on with their patrol. "Andiamo, andiamo, andiamo!" he says. "Let's go."

The law enforcement foursome strolls down the center of Via del Corso, one of Rome's premier shopping streets. The men immediately attract attention, and Pang Bo stops to chat with several Chinese women who'd seen in the news that Chinese police were patrolling in Rome.

Alongside tourists, there are some 266,000 Chinese nationals living and working in Italy — but there is little contact with Italian society.

National police chief Alessandro Pansa describes the joint patrols as part of a new policy of proximity policing, being close to citizens' needs — as well as a broader strategic investment.

"It will lead to a wider international cooperation, exchange of information and sharing resources to combat the criminal and terrorist groups that afflict our countries," he says.

According to the daily Corriere della Sera, one of the main aims of the joint patrols — and perhaps the most difficult — is breaking the code of silence within Italy's large Chinese community.

That could help break up the many lucrative illegal activities run jointly by Chinese and Italian organized crime — including drug trafficking, counterfeiting and running sweatshops.