Accessibility links
Teaching Kids In Vietnam To Avoid A Deadly, Everyday Legacy Of War : Parallels In Quang Tri province, the most heavily bombed during the Vietnam War, 10 percent of the ordnance never detonated. A former U.S. military intelligence analyst is part of a group cleaning up the bombs. 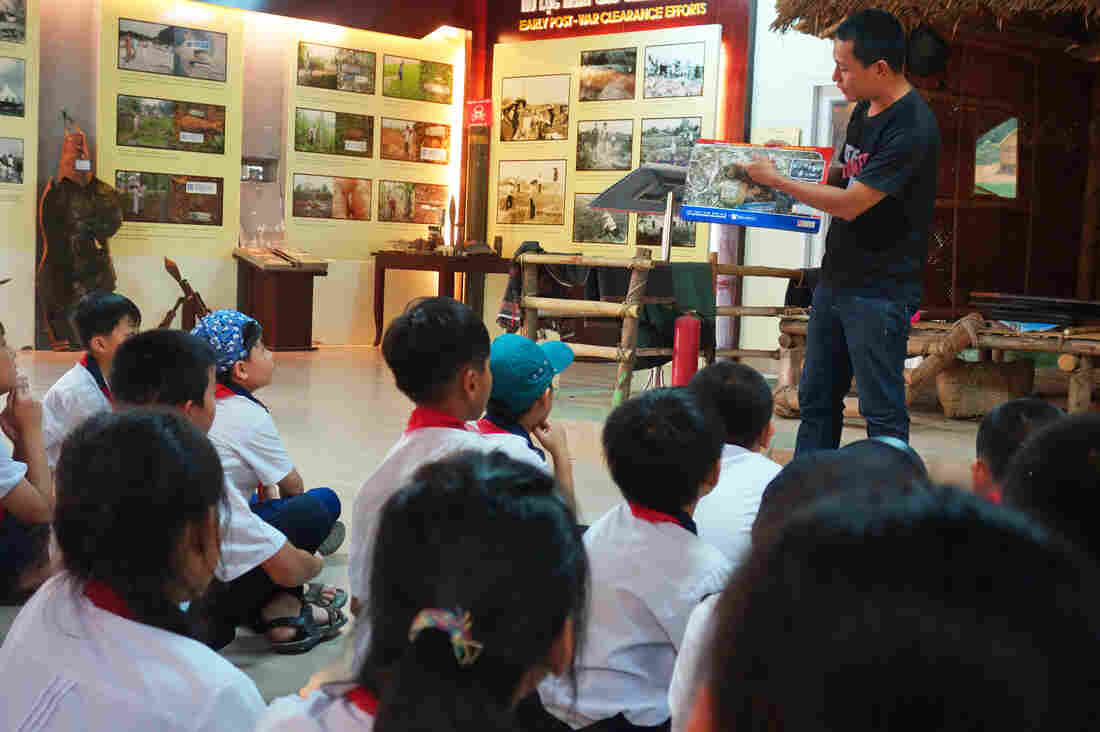 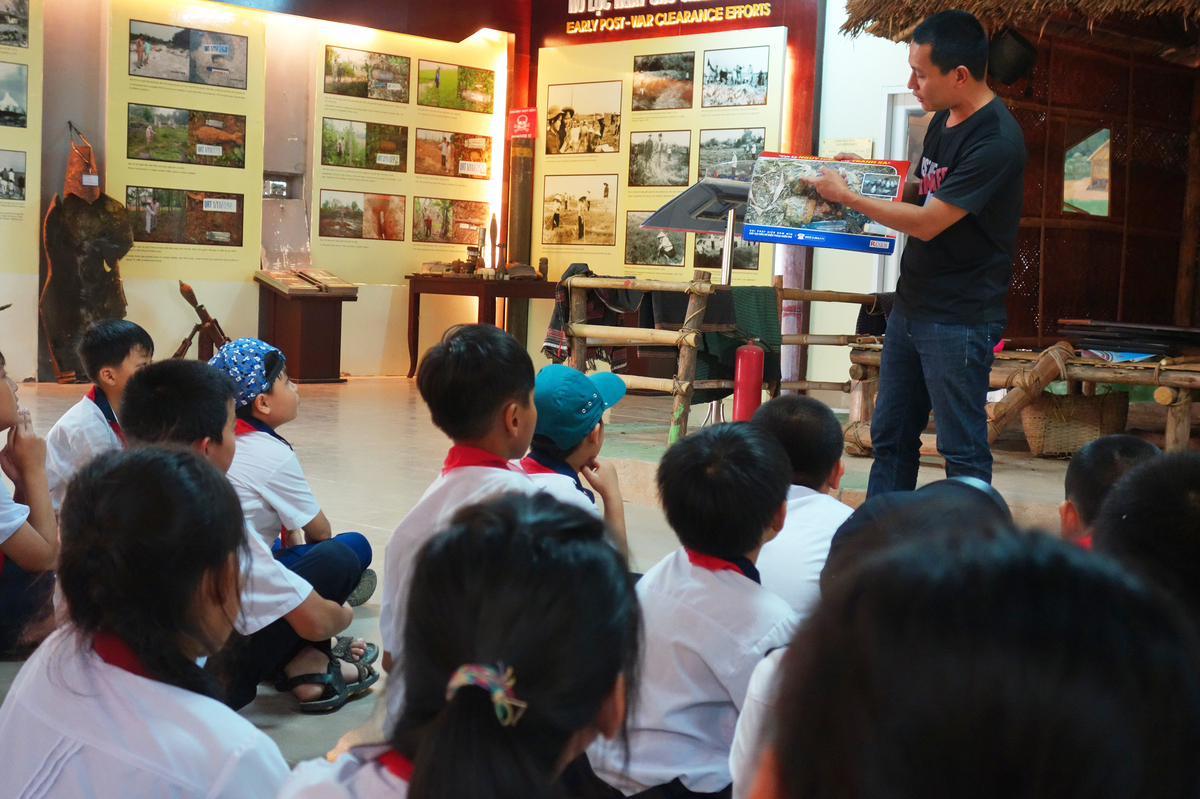 Nguyen Thanh Phu delivers a presentation to children on the dangers of active land mines and bombs in Dong Ha, Vietnam.

It's 9 a.m. in central Vietnam's Quang Tri province, and several dozen grade-schoolers sit cross-legged on the floor as their teacher holds up pictures, asking the kids to identify them.

"Bombi!" several shout in unison, when shown a small cluster munition used by the U.S. during the Vietnam War, more than 40 years before any of these children were born. "M79!" they blurt as he flashes another, a picture of a rocket-propelled grenade.

Their teacher is Nguyen Thanh Phu, the manager at the Mine Action Visitor Center in Quang Tri's provincial capital, Dong Ha. He's good with the kids — making a game of the presentation to keep them interested. And keeping them interested is serious business.

"It's a life skill," he says. Children have to be aware of how to identify and avoid unexploded ordnance — like learning how to ride a bike or crossing the street.

Quang Tri was the most heavily bombed province of the Vietnam War, says my host and guide, Chuck Searcy of Project Renew, which runs the center. As much as 10 percent of those munitions didn't detonate, according to the Pentagon. 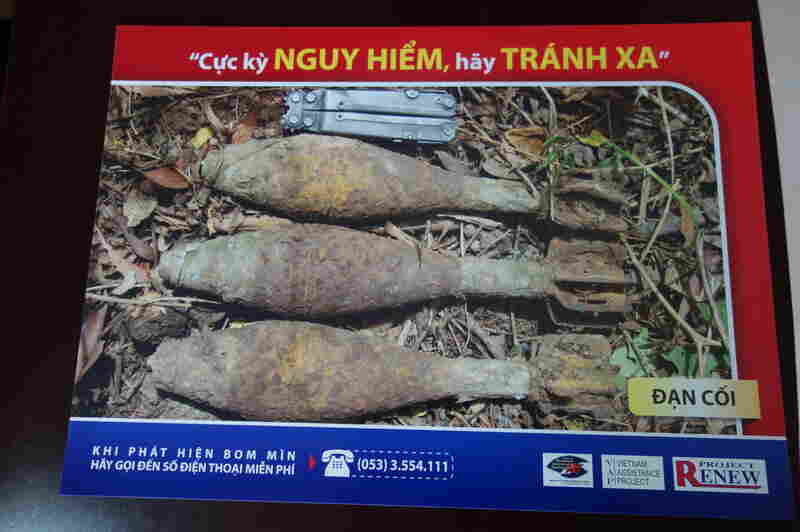 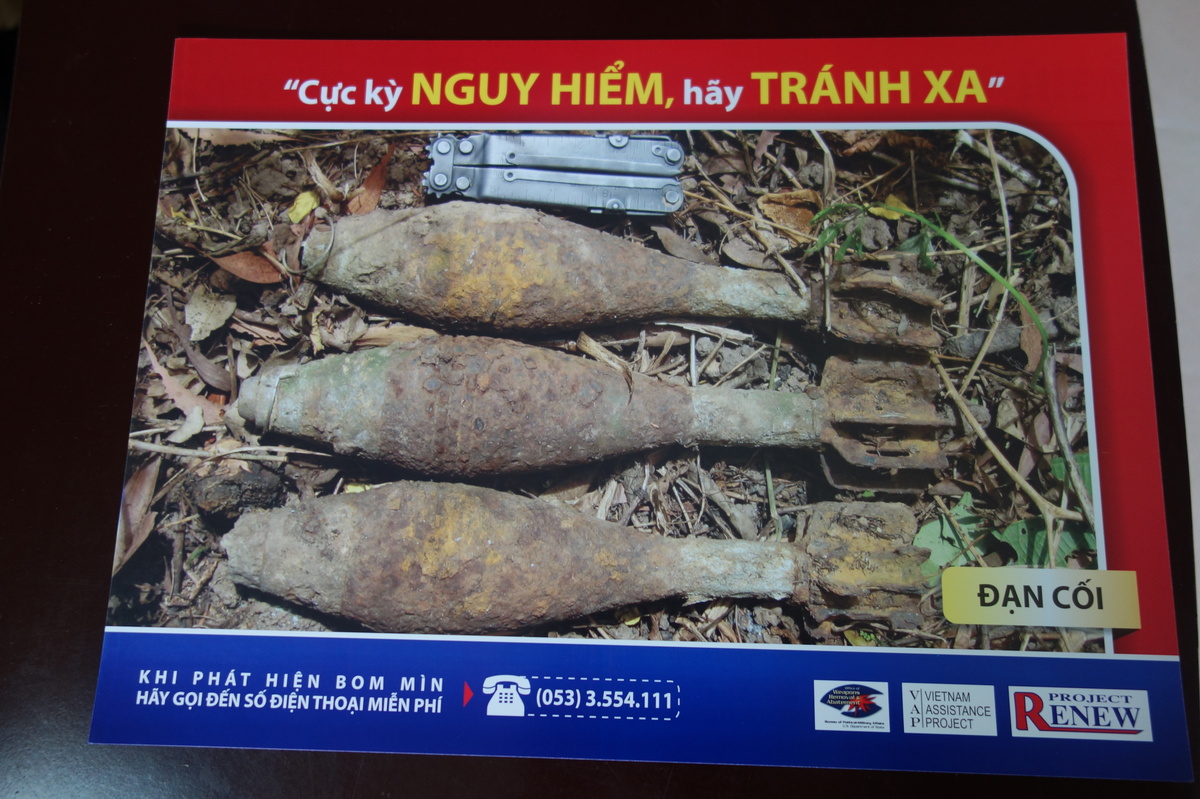 "Four decades later, it is still a threat in heavy concentrations in certain parts of the country, Quang Tri being the worst," Searcy says. "The ordnance is still active, lethal and will still blow your arm or leg off or kill you, and these kids are especially vulnerable."

Which is why Project Renew, in cooperation with local schools, runs awareness workshops for students from all over the province. They're quick learners. Fourth-grader Huy Nguyen says he knows exactly what to do if he sees unexploded ordnance in a ditch or the garden — or the schoolyard.

His dad will then call one of Project Renew's disposal teams, who will come and deal with it, Searcy says.

"Every day, these teams operating all over the province get five or 10 calls a day," he says. "Our teams safely destroy 200 to 300 munitions in a week. So it's an ongoing problem. It will continue. But it can be managed."

Managing the problem is something Searcy has been doing for a while — more than 20 years. He made his first trip to Vietnam almost 50 years ago, as a reluctant draftee.

"I really had no idea where Vietnam was; I couldn't find it on a map or a globe," he says. "And I didn't have any particular interest in Vietnam, except, like many young men at the time, I wanted to avoid serving in Vietnam. I didn't want to go to war." 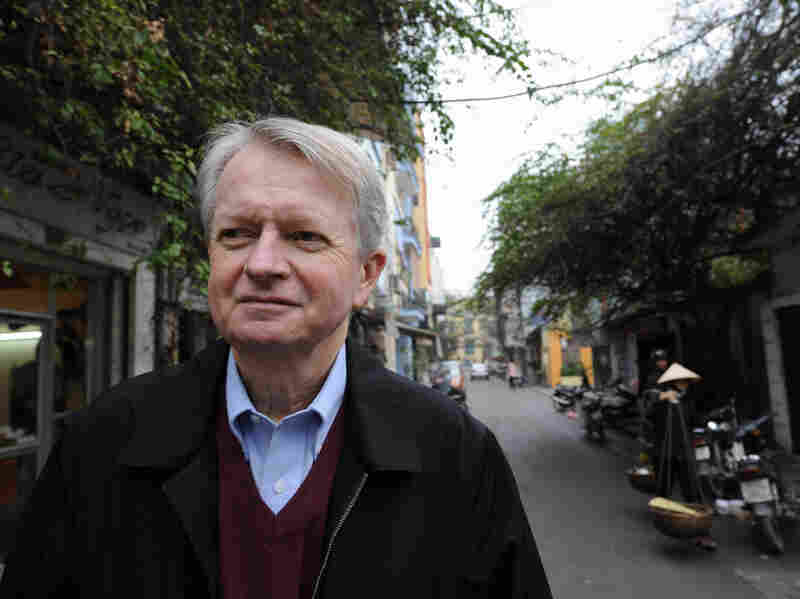 Chuck Searcy, shown in Hanoi in 2008, was a military intelligence analyst during the Vietnam War. He returned to Vietnam in 1995 and has been working to rid the country of unexploded ordnance since. Hoang Dinh Nam/AFP/Getty Images hide caption 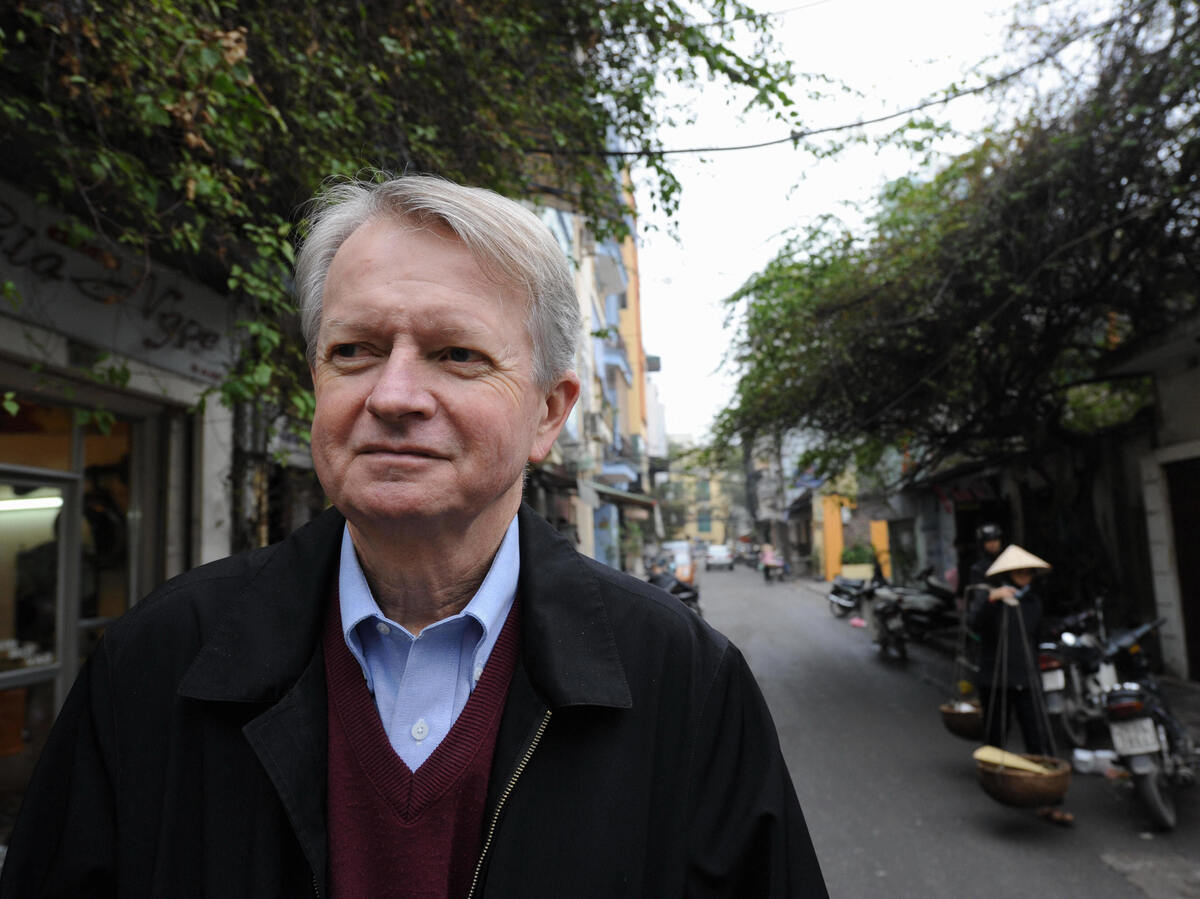 Chuck Searcy, shown in Hanoi in 2008, was a military intelligence analyst during the Vietnam War. He returned to Vietnam in 1995 and has been working to rid the country of unexploded ordnance since.

But he did. He was assigned to military intelligence. Now everyone — congressional delegations, tour groups, business people — comes to see Searcy. A genial, soft-spoken native of Athens, Ga., he came back for good in 1995, working first with the Vietnam Veterans of America and later, Project Renew. He is tall and lean, and looks and talks like a cross between Jimmy Carter and Gary Cooper.

Searcy remembers a time in the mid-1990s when it was difficult to get U.S.-based donors interested in helping here. The war was still too fresh in the minds of many back home. And in Vietnam, too.

"I've been here a long time and it's been a frustrating process at times, and sometimes not very hopeful," he says.

But in the past year or so, Searcy says, there's been a sea change. Earlier, his group would be lucky to get a few hundred thousand dollars a year from the U.S. government to help fund its work. But in the past year, the spigot has opened. The State Department, he says, recently gave nearly $8 million for Project Renew's partner, Norwegian People's Aid, and even more for several other ordnance-disposal groups working in Quang Tri.

"It's been a long time coming, but the U.S. government is now fully engaged in dealing with these efforts," he says. "In fact, now the U.S. government is the biggest donor in supporting cleanup efforts to rid Vietnam of the bomb and mine threat. And there's greater cooperation between all organizations and with the Vietnamese government than ever before."

After so many years, Searcy says he now sees a light at the end of the tunnel — a time, he says, within a decade, maybe less, when Vietnam will be able to manage its unexploded ordnance problem on its own and keep its people safe, even in Quang Tri province. 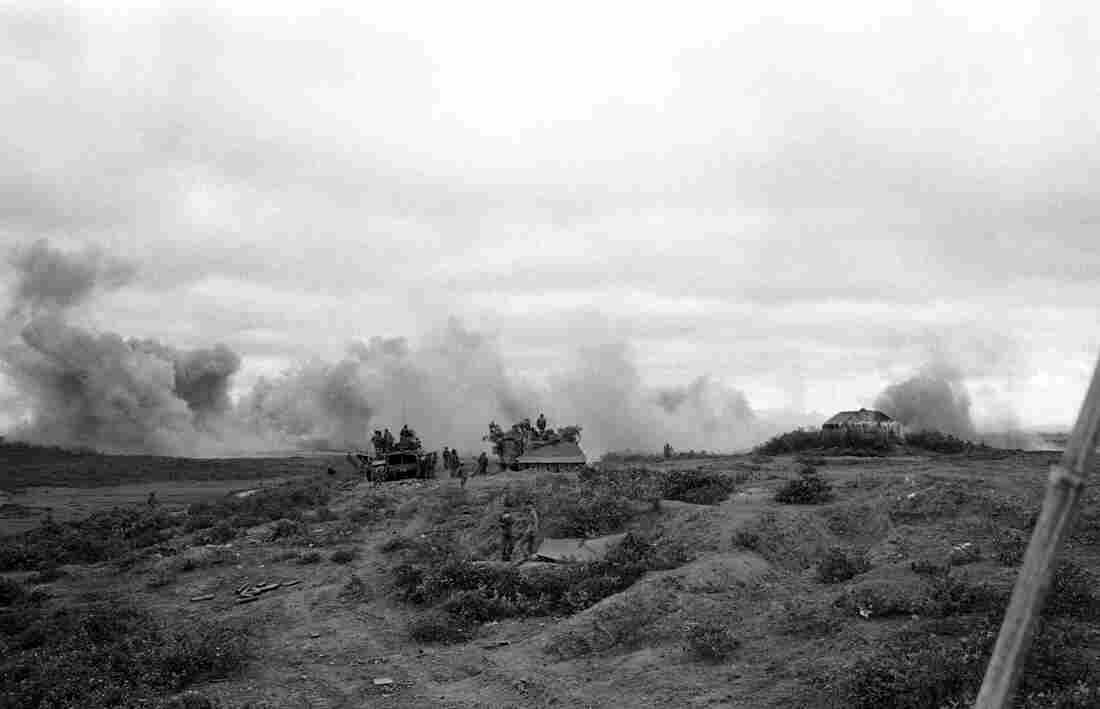 Smoke rises from a B-52 airstrike on a North Vietnamese tank column about 15 miles west of Dong Ha on April 18, 1972. Quang Tri province was hit hardest in the war. Nick Ut/AP hide caption 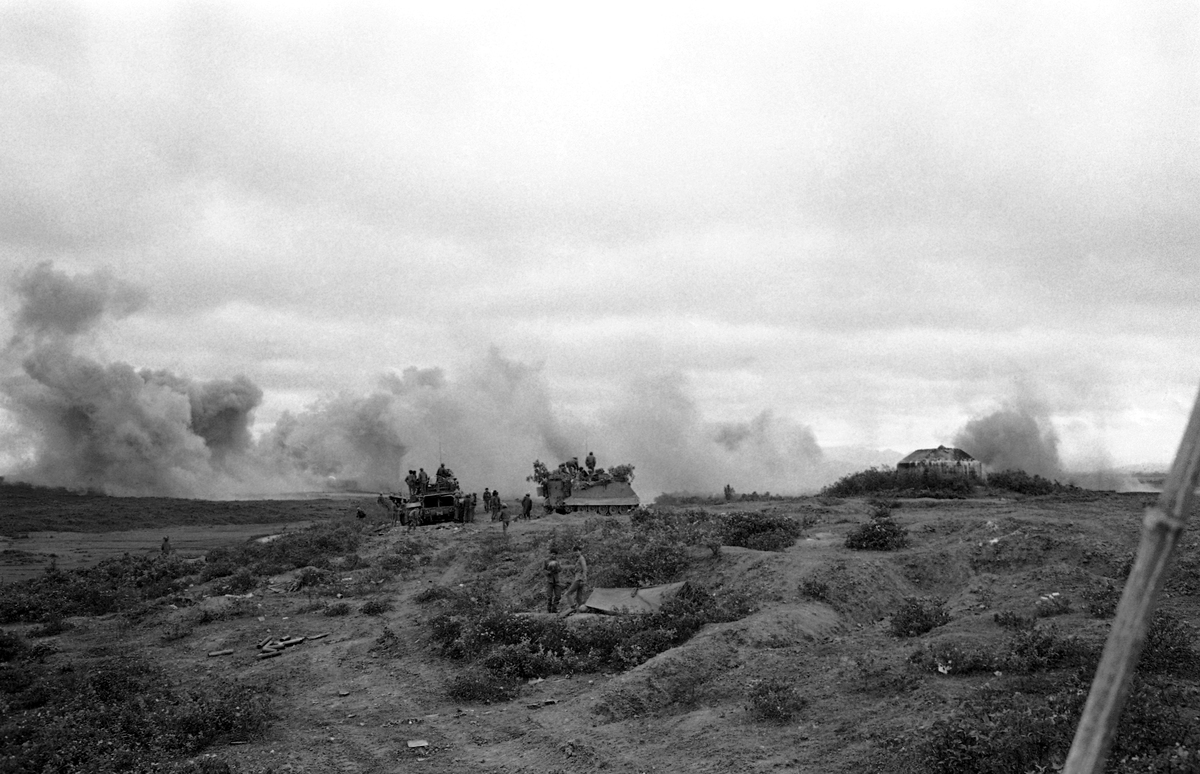 Smoke rises from a B-52 airstrike on a North Vietnamese tank column about 15 miles west of Dong Ha on April 18, 1972. Quang Tri province was hit hardest in the war.

"Not that every bomb and mine will be cleaned up, that's impossible," Searcy says. "They're still doing cleanup in Europe from World War I and II; 5,000 bombs a year is not uncommon."

The goal isn't to remove every piece of ordnance, Searcy says, but to keep Vietnam safe through education. "We're doing it in Quang Tri province, teaching the children and adults how to be safe. The combination of local people being informed, knowing what to do, calling the hotline number, that's the answer to the problem."

Searcy is also encouraged that the U.S. is now doing more to help deal with the lingering effects of the chemical defoliant Agent Orange. U.S.-funded teams are cleaning up Agent Orange hot spots in several parts of the country, though Searcy says the U.S. could and should do more to help Vietnamese families who may be suffering from exposure to it.

"Three million families, according to the Vietnamese government, suffering health consequences of exposure to Agent Orange, or a genetic link to Agent Orange," he says. "Those people need help of the most basic kind at home to make their lives a little more bearable and we haven't quite gotten a handle on that."

The work is far from over. Meanwhile, the danger from unexploded ordnance is still very real.

While Searcy and I were talking, one of his colleagues was killed as he worked to dispose of a cluster bomb just a few miles down the road. Ngo Thien Khiet was a 45-year-old father of two, a team leader who had been with Project Renew for nearly a decade. He joins the list of more than 100,000 Vietnamese killed or wounded by unexploded ordnance since the war ended more than 40 years ago.