Accessibility links
As President Visits Japan, Okinawa Controversy Is Back In The Limelight : Parallels Following a gruesome killing, allegedly by a former Marine, controversy over the presence of American troops on Okinawa is adding another layer to Obama's historic trip this week. 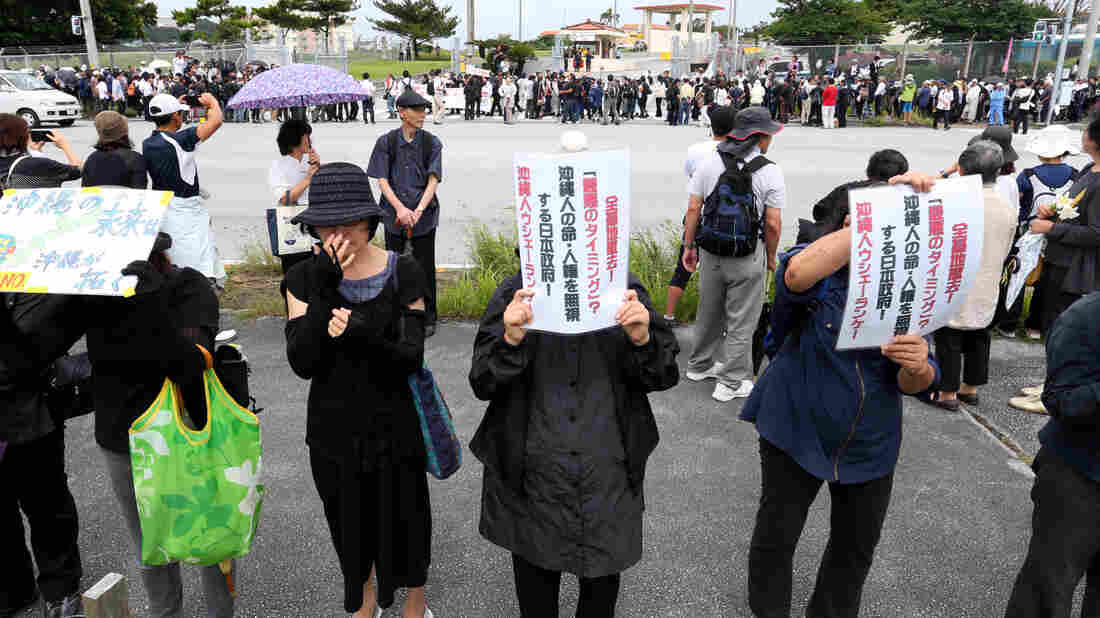 Demonstrators gather in a silent rally to mourn the death of an Okinawa woman in front of Camp Zukeran on May 22. The crime is thrusting the opposition to the U.S. presence on Okinawa back in the spotlight. The Asahi Shimbun/The Asahi Shimbun via Getty Images hide caption 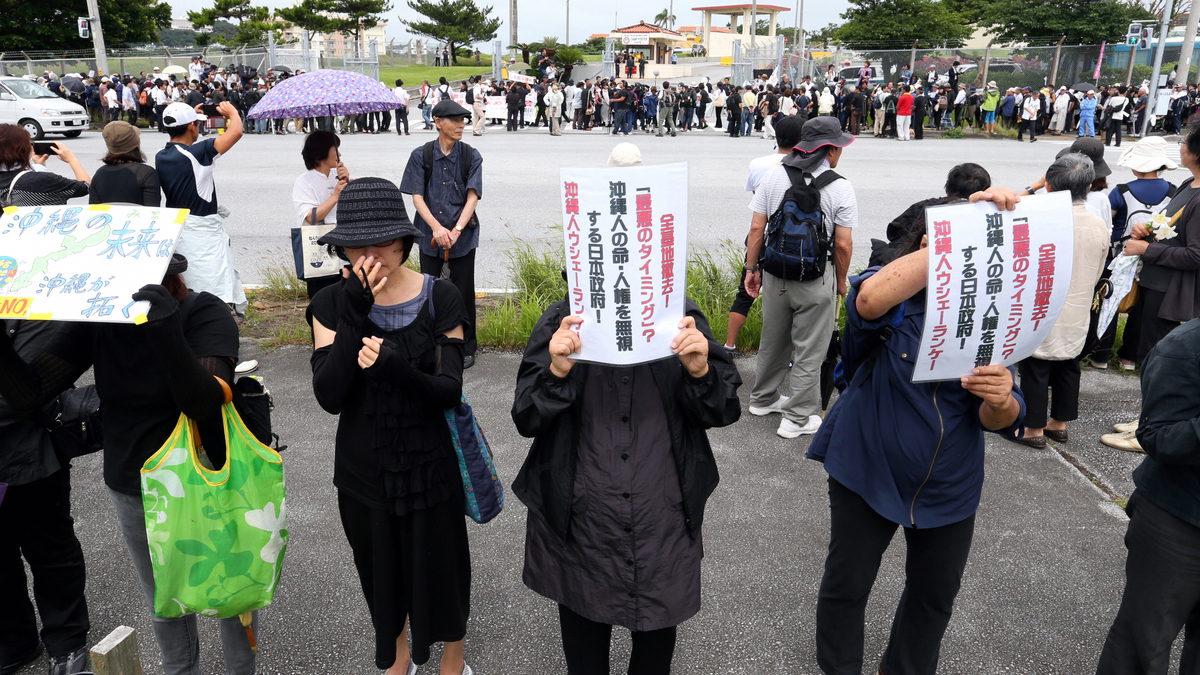 Demonstrators gather in a silent rally to mourn the death of an Okinawa woman in front of Camp Zukeran on May 22. The crime is thrusting the opposition to the U.S. presence on Okinawa back in the spotlight.

Renewed controversy over heavy American military presence on the Japanese island of Okinawa swirled as President Obama arrived in Japan for the G7 summit. Just a week earlier, a former U.S. Marine allegedly raped and killed a local Okinawa woman, triggering protests on the island.

"I firmly lodged a protest with President Obama about the recent incident in Okinawa," Shinzo Abe said after the two leaders met in Ise-Shima on Wednesday night. In fact, he said, "The entire time was spent on this specific case."

The case involves a former U.S. Marine who worked on an Okinawa military base. Investigators say the 32-year-old man strangled his victim before stuffing her body in a suitcase. It's not the first such assault to happen on Okinawa.

"It really started back in 1995, when there was a gang rape of a 12-year-old schoolgirl," says Jeff Kingston, who heads the Asian Studies department at Tokyo's Temple University. "And that ignited massive demonstrations all over Okinawa. Since then, there have been a number of other similar type of crimes."

Diplomats from both countries have been scrambling to contain the fallout. Defense Secretary Ash Carter issued an apology from Washington on Saturday.

Obama, speaking after he and Abe met Wednesday, said, "The U.S. is appalled by any violent crime that may have occurred that may have been carried out by any U.S. personnel or contractors. We consider it inexcusable and we are committed to doing whatever we can to prevent any crimes that we can of this sort ... We will be fully cooperating with the Japanese legal system ... in making sure justice is served."

Meanwhile, Kingston says, "Okinawans have had enough. They're fed up and they want Tokyo and Washington to do more to protect the local people against the over-presence of American military in what's often called a 'Cold War island.' "

The U.S. military presence started after the bloodiest battle of the Pacific war was waged on Okinawa. The chain of islands became the only part of Japan that Americans invaded and occupied. Troops have never really left. Today, Okinawa Prefecture is a key strategic location for the U.S. security commitment to Japan and the region.

At Marine Corps Air Station Futenma, home base for 3,300 American military personnel and 60 aircraft, Marines can get anywhere in the Pacific inside six hours.

"This is very, very stable, peaceful region," says Col. Peter Lee, the U.S. commander. "And our 70 years of presence here has undergirded that."

Okinawa's land mass is less than 1 percent of Japan's. But it hosts more than a dozen U.S. bases, 70 percent of all U.S. bases in the country.

"We're prepared for all types of contingencies, whether that's a tsunami or an earthquake or it's some type of conflict that might develop in one of the seas or the oceans that surround us," Lee says.

Preparation for tensions on the seas is particularly timely lately because of North Korea's actions. But how much of the security burden should be shouldered by Okinawa? That question is at the center of a long-running standoff between the island and the central Japanese government.

On the northern end of the island, grass-roots groups have protested a proposed relocation of Air Station Futenma elsewhere on the island for years. They want it out of Okinawa altogether. So does Okinawa's governor, Takeshi Onaga.

"I don't oppose the presence of American military," Onaga tells NPR. "But since there are so many bases, I think the locations should be balanced across all of Japan."

With military bases have come problems like environmental damage. Noise. Accidents. And assaults by American troops against local women.

"For Okinawans, they've been there and done this," says Kingston.

For Americans, the troubles in Okinawa are less well known. But "with the Obama visit, the whole limelight is focused on Japan, so this is going to, in a sense, get into the American consciousness," he says.

"The Japanese people should know how deeply moved we feel about what has happened," Obama said Wednesday. As he remembers the lives lost in Hiroshima when he visits there Friday, the latest controversy is another reminder that the war's legacy lives on some 70 years later.

Akane Saiki and Chie Kobayashi contributed to this report.