Accessibility links
Obama's Nuclear Paradox: Pushing For Cuts, Agreeing To Upgrades : Parallels Obama has sought to reduce the world's nuclear stockpile throughout his tenure. Yet he's also put the U.S. on course to spend some $1 trillion on upgrading its aging nuclear arsenal. 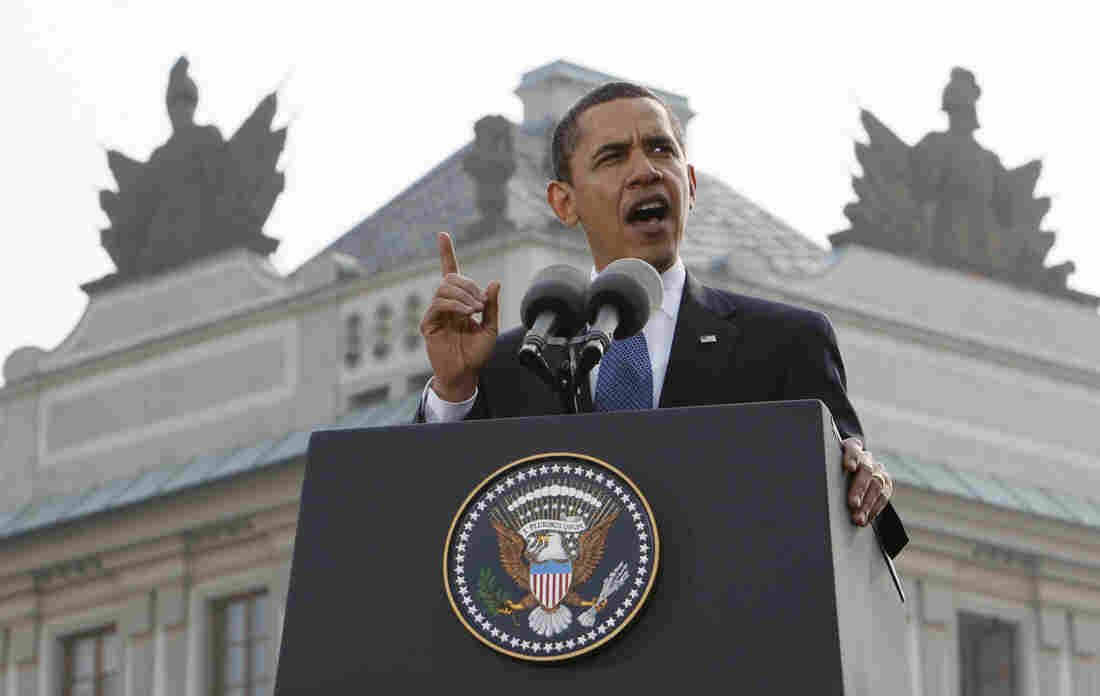 President Obama, speaking in Prague in 2009, said: "I state clearly and with conviction America's commitment to seek the peace and security of a world without nuclear weapons." While Obama has pushed for a reduction in nuclear arms throughout his presidency, he has also agreed to an expensive upgrade of America's aging nuclear arsenal. Charles Dharapak/AP hide caption 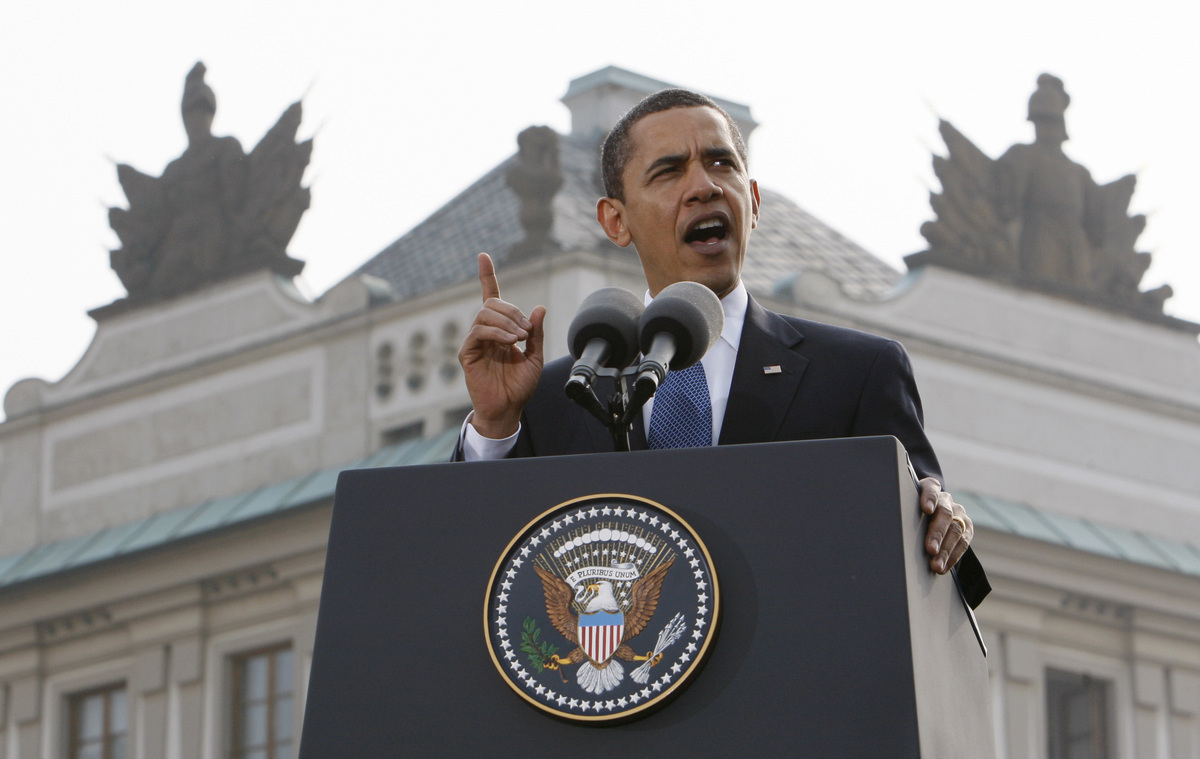 President Obama, speaking in Prague in 2009, said: "I state clearly and with conviction America's commitment to seek the peace and security of a world without nuclear weapons." While Obama has pushed for a reduction in nuclear arms throughout his presidency, he has also agreed to an expensive upgrade of America's aging nuclear arsenal.

President Obama came into office with a dream of a world without nuclear weapons, and he's sure to touch on this theme Friday when he becomes the first sitting U.S. president to visit Hiroshima, site of the world's first atomic bombing.

Yet Obama also has put the U.S. on course to spend around $1 trillion on upgrading its nuclear arsenal over the next three decades, critics say.

Everything about nuclear weapons is extreme: the implications of their use, the costs involved, and the strategic and political paradoxes they create.

Although the world hasn't seen a nuclear attack since 1945, the U.S. "uses" its strategic weapons every day, advocates say, by having them on hand to deter potential enemies. The most destructive arsenals ever built kept the world from fighting a major war, supporters say.

And a president who has opposed nuclear weapons all his life has wound up asking Congress to fund a new class of ballistic missile submarine, a new stealth bomber, upgrades to the current stock of nuclear weapons, a new cruise missile and billions of dollars of other programs.

The world's other nuclear superpower, Russia, is rejuvenating its own nuclear arsenal and threatening to develop whole new weapons, including an intermediate-range missile and what it claims is a new nuclear torpedo.

China, Russia, India and the United States all are developing new missiles that travel at least three times the speed of sound. Disarmament activists say no country should have these weapons.

"Obama and his successor, along with Russian President Vladimir Putin, have a responsibility to pull back from a nuclear action-reaction cycle that would put both countries at greater risk and block further nuclear reductions for many more years to come," declared Daryl Kimball, head of the Arms Control Association.

Kimball has called on Obama to propose new negotiations on global restraint, urge China, India and Pakistan to freeze their nuclear stockpiles and call for "a new push for a world without nuclear weapons."

In 2009, the first year of his presidency, Obama laid down what he called a "comprehensive agenda" to get to a nuclear-free world. And on a visit to Japan that same year, he said he hoped to visit Hiroshima while in office.

On Friday, he will make good on that second promise. But the president is nowhere close to the first — though he has always tried to be realistic about it.

"This is a distant goal, and we have to take specific steps in the interim to meet this goal," Obama said in 2009. "It will take time. It will not be reached probably even in our own lifetimes. But in seeking this goal we can stop the spread of nuclear weapons, we can secure loose nuclear weapons [and] we can strengthen the nonproliferation regime."

The president did get a new strategic arms reduction treaty with Russia in 2010 that obliges both sides to reduce their numbers of deployed strategic warheads to 1,550. He did make good on his vow to convene regular nuclear security summits aimed at getting control of loose nuclear material.

But the treaty with Russia, known as New START, did not address tactical nuclear weapons, and critics blasted what they called the imbalance of a deal in which they said Washington made more concessions than Moscow.

This year's nuclear safety summit in Washington was viewed as a mere victory lap — which Russia boycotted. And by the final year of Obama's term, it has become clear that the administration will have wound up spending more on new weapons than on nonproliferation. A lot more.

The Navy could spend nearly $100 billion on a class of 12 new submarines to carry the sea-based leg of the nuclear deterrent. The full cost of the Air Force's new nuclear stealth bomber is secret, but it will amount to at least $55 billion or more. The Air Force wants a new nuclear cruise missile, to upgrade its arsenal of B-61 nuclear bombs, and to develop a new ballistic missile to replace its 1970s-era Minuteman III.

The Pentagon's plan to recapitalize the nuclear force is so expensive the military services don't want to pay for it out of their own budgets.

First, Congress created a special fund outside the shipbuilding account to cover the Navy's new submarine. Then, this spring, Air Force Secretary Deborah Lee James told a House panel that if there's going to be a special fund for strategic deterrence, it should pay for everything in the triad — the Navy submarine and the new Air Force bomber and ballistic missile.

The strategic deterrence mission remains so critical that new funding should come on top of the services' base budgets, Pentagon leaders say, because the U.S. can't risk letting its current systems get too old.

"This is foundational to our survival as a nation," Chief of Naval Operations Adm. John Richardson argued when he issued his new guidance for the Navy.

Nuclear weapons opponents feel keenly what they call the dichotomy between where Obama began and where he has wound up.

"We're at this moment where the bookends of his administration are so in conflict with each other," said Rachel Bronson, executive director of the Bulletin of the Atomic Scientists. "We've come from the grand visions of 2009 to the beginnings of major nuclear modernization and setting up for Cold War 2.0."

Part By Accident, Part By Design

Obama's legacy is partly the fault of history and partly the result of his own actions, Bronson said.

The first-term Obama, fresh from his election and eager to pursue a "reset" with Russia, did not anticipate that Putin would invade Ukraine and chill relations so profoundly.

Obama and his administration did, however, know exactly what they were doing when they tried to sell the 2010 New Strategic Arms Reduction Treaty to the Senate, Bronson said.

The administration tried to appeal to pro-nuclear senators by agreeing to invest in the nation's nuclear labs and nuclear weapons infrastructure, which set in motion policies that may long outlast Obama's term.

Anti-nuclear groups hope the president will use the time he has left to do something big.

"The president must do more than give another beautiful speech about nuclear disarmament," wrote Lisbeth Gronlund of the Union of Concerned Scientists. "The world needs — indeed, is desperate for — concrete action."

The Union of Concerned Scientists is pushing for Obama to take the American nuclear triad off what it calls "hair-trigger alert," in which Air Force bombers and land-based missiles and Navy submarines keep ready to launch on a few minutes' notice. That creates too much risk for a miscalculation or mistake, opponents say.

American policies, along with nuclear modernization in China and Russia, plus North Korea's ambitions, prompted the Bulletin of the Atomic Scientists to move its "Doomsday Clock" from 5 minutes to midnight to 3 minutes. The bulletin kept it there earlier this year — to convey how close it fears the world could be to destruction.

"There were bright spots," Bronson said, "but it didn't feel like a very optimistic time."