Accessibility links
In Veneuela, Inflation And Shortages Make For Absurd Shopping : Parallels Reporter John Otis reflects on the changes in Venezuela since he first arrived there 19 years ago. The country now confronts triple-digit inflation and its largest bank note is worth less than a dime. 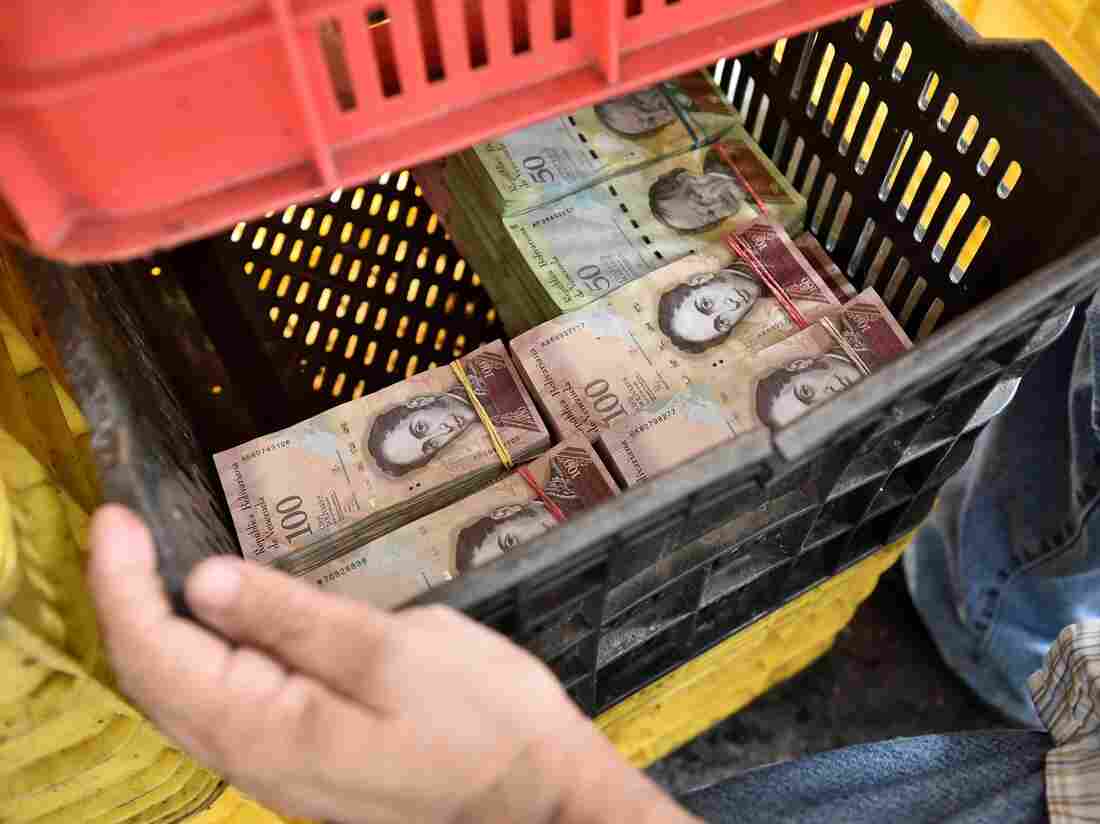 A man uses a vegetable container to carry currency notes in a market in Caracas on May 21. Amid a crushing economic crisis and triple-digit inflation, Venezuela's bolivar has lost so much value that the largest bill, the 100-bolivar note, is now worth less than a dime on the black market. Anadolu Agency/Getty Images hide caption 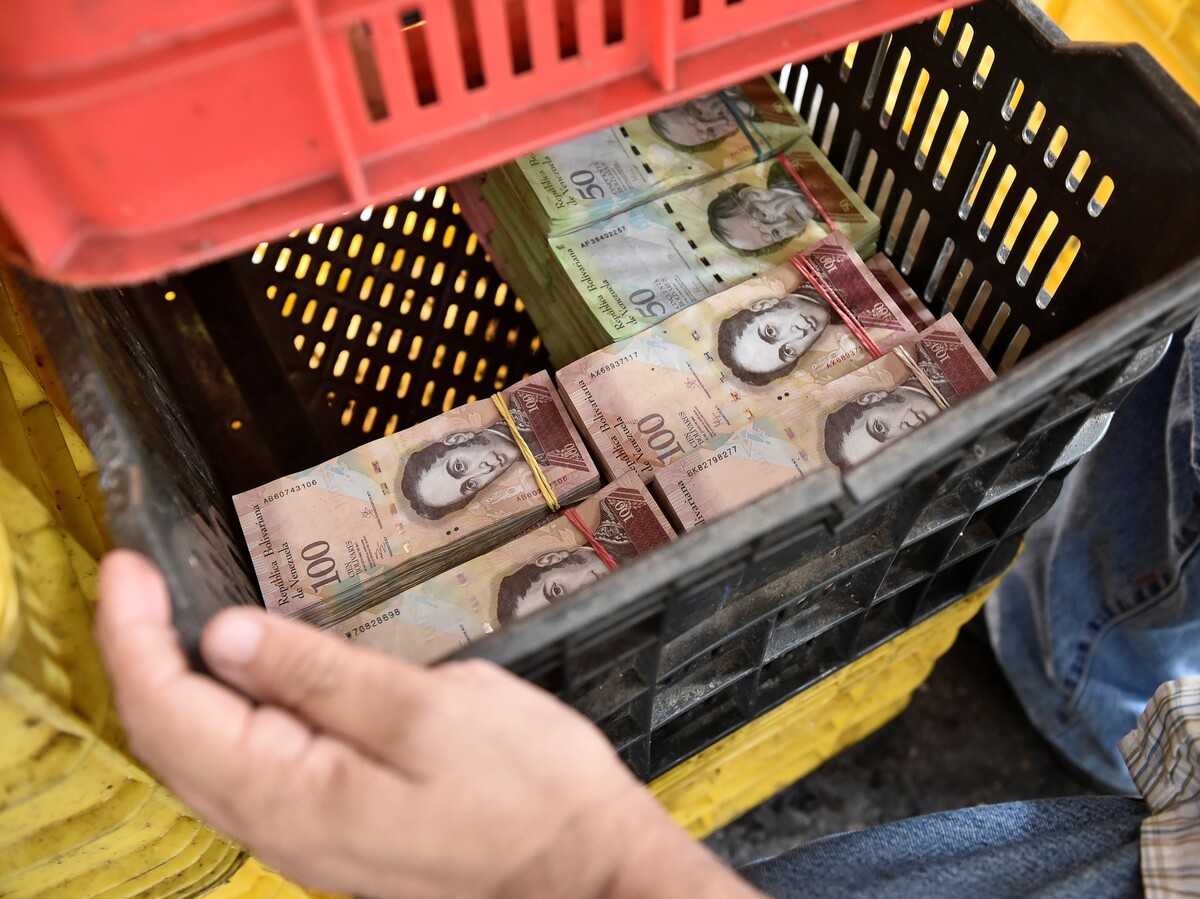 A man uses a vegetable container to carry currency notes in a market in Caracas on May 21. Amid a crushing economic crisis and triple-digit inflation, Venezuela's bolivar has lost so much value that the largest bill, the 100-bolivar note, is now worth less than a dime on the black market.

Editor's note: John Otis has reported from Latin America since the U.S. invasion of Panama in 1989, and first covered Venezuela 19 years ago. He's returned many times since, and reflects here on how the country has changed since he first arrived.

During my first reporting trip to Caracas in 1997, I was nearly robbed leaving a subway station. While riding up the escalator, I was sandwiched by two rather inept thieves who pried my wallet out of my pocket, but then dropped it. I snatched the billfold and ran.

I was reminded of that incident on my most recent visit to Caracas this month. Amid a crushing economic crisis and triple-digit inflation, the local currency has lost so much value that the largest bill, the 100-bolivar note, is now worth less than a dime on the black market. When I changed $50, I received bricks of bolivars that weighed more than a pound. To carry the cash I needed a backpack, not a wallet.

Not that I felt rich — it was like lugging around a piggy bank full of pennies and nickels.

And the money quickly disappeared: It takes wads of bills to pay for a newspaper, a Coke or an arepa, the traditional Venezuelan corn cake. To deal with the volume, hotels, restaurants and other businesses use money-counting machines. Some vendors and taxi drivers, weary of leafing through stacks of bills, accepted my bolivars without even counting them.

Venezuelans can avoid these hassles with debit cards, which can be used for even minuscule debts. That's a good thing, because as prices have risen people have responded by buying smaller quantities. At a corner grocery I saw a woman ask for a few ounces of coffee, which was spooned into a baggie — and a bit of mayonnaise that was placed in a cup. She paid with plastic.

In a land of shortages — the list ranges from pasta and rice to diapers and car parts — something is always lacking. On this visit, the country was short of cash.

Because there are so many market distortions, Venezuela needs more and more bolivars for the economy to function. But as the Wall Street Journal reported in February, the Central Bank's printing presses have run out of the security paper and metal required to produce new bolivars. So, the government has been ordering tens of billions of fresh bills from abroad — so many that they have been flown into the country on jumbo jets.

President Nicolás Maduro's government could make life easier by printing bank notes of much higher denominations, so that people don't have to carry so many around. Or it could take a page from the Sandinista playbook.

I was in Nicaragua in 1989 when, amid out-of-control inflation, the revolutionary government began stamping three black zeroes on existing bills, instantly turning 100-cordoba notes into 100,000. They were so ugly that Nicaraguans called them chancheros, or pig pens — and they only made inflation worse.

In those days Nicaragua, one of the poorest countries in the hemisphere, had a plausible excuse for its woes — and those unsightly bank notes. The ruling Sandinistas were at war, battling the U.S.-backed Contra rebels, and faced a U.S. trade embargo.

What's Venezuela's excuse? It's home to the world's largest oil deposits and — despite Maduro's regular warnings of an imminent U.S. invasion — is at peace.

The president blames the oil price slide, as well as an "economic war" that he claims is being carried out against his government by his opponents. Most analysts, though, point to government corruption and years of failed socialist policies. Yet Maduro has refused to scrap price controls or currency controls, or to adopt other free-market reforms.

His big initiatives have been baby steps. This year, he raised the price of gas — which costs less than an equal amount of water — by a few pennies per gallon.

Caracas political analyst Luis Vicente León likens such moves to "putting truffle salt on a rotten steak." Apparently, the government is now sprinkling some on the money problem.

The Central Bank announced that it will issue 500- and 1,000-bolivar notes later this year. At the current black-market rate, these new bills will be worth 50 cents and one dollar, respectively.

So ahead of my next trip to Venezuela, I will make the following note to self: "Leave the wallet, take the backpack."