Accessibility links
Syrian Cosmonaut Mohammed Faris Is Now A Refugee In Turkey : Parallels Mohammed Faris traveled to the Mir Space Station nearly three decades ago, becoming so famous that Syria's president was jealous of him. Now he's one of the many Syrians who has fled to Turkey. 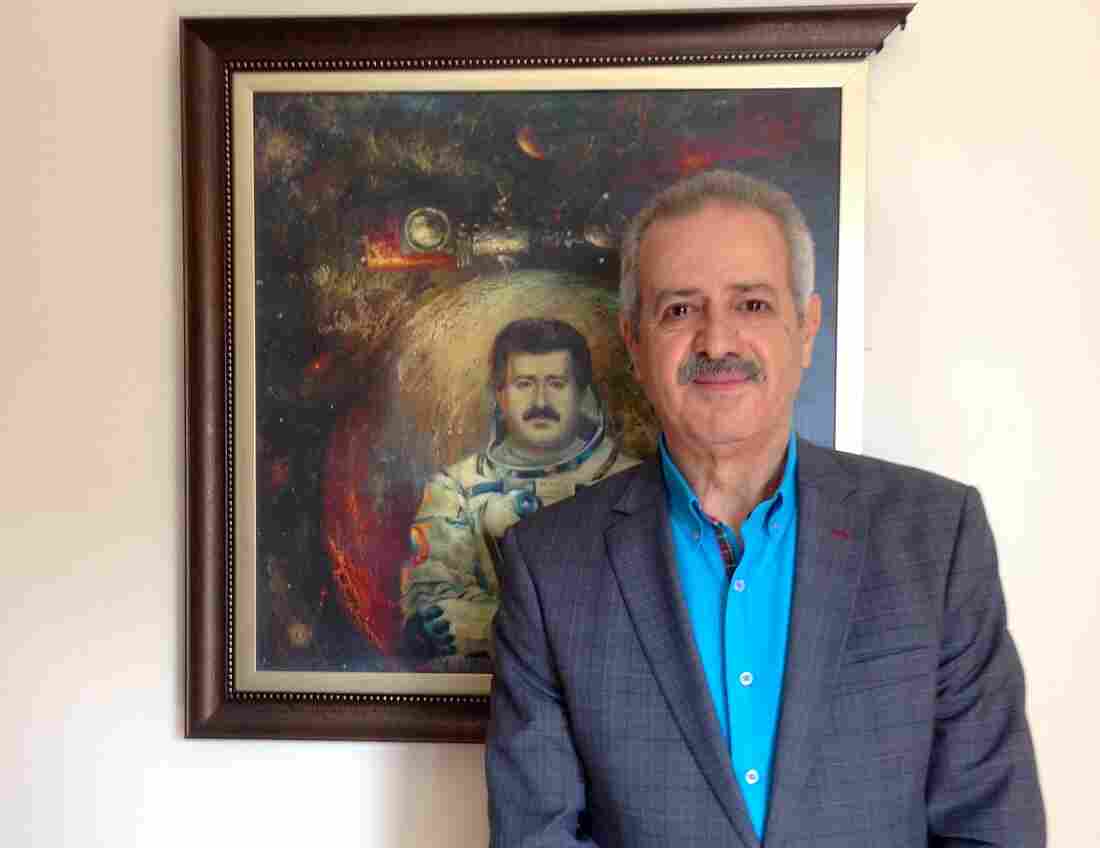 Syria's Mohammed Faris was a national hero after he became the country's first cosmonaut in 1987, traveling to the Soviet Union's Mir Space Station. Now he's a refugee in Istanbul, Turkey. Faris, 65, is shown standing in front of a painting of himself as a cosmonaut. A critic of Syria's President Bashar Assad, he still hopes to return to his homeland. Peter Kenyon / NPR hide caption 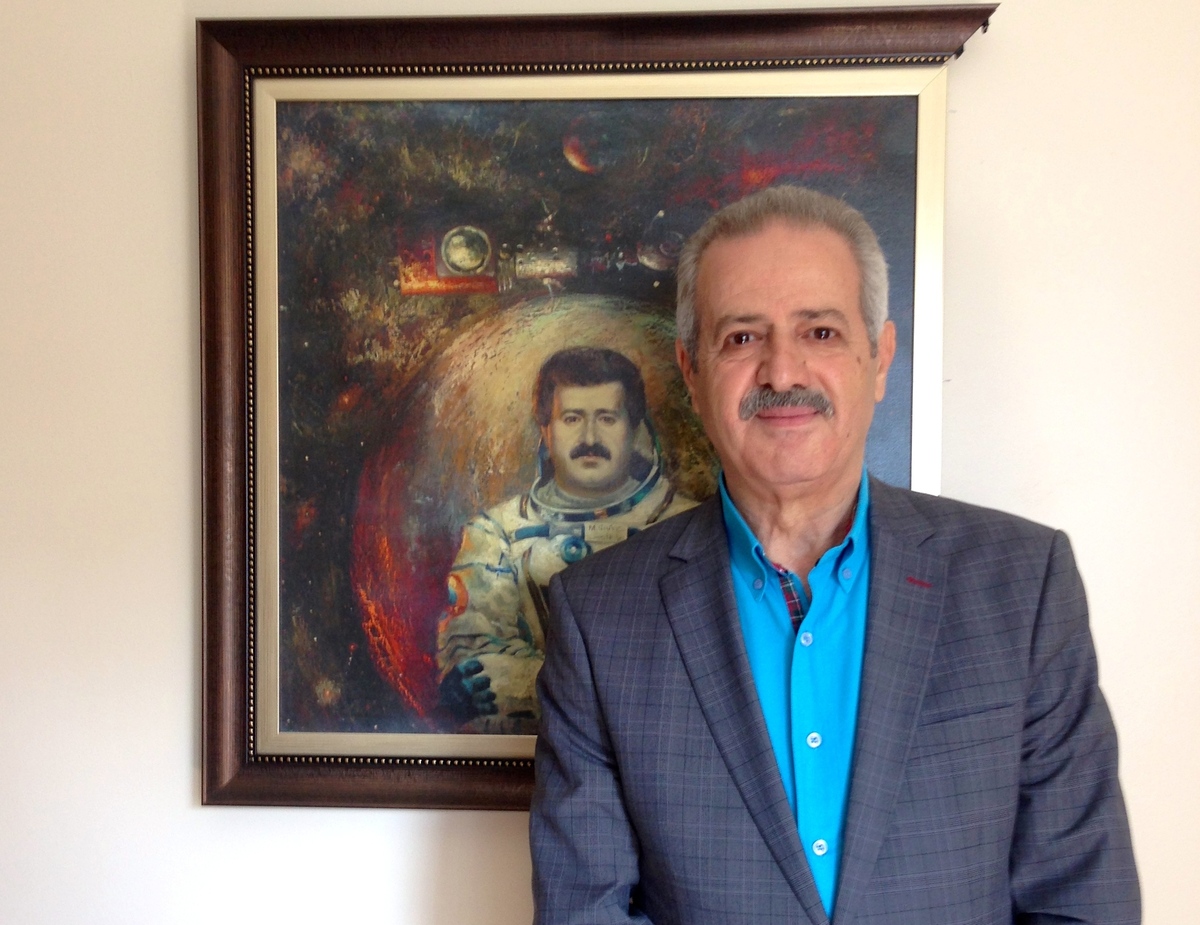 Syria's Mohammed Faris was a national hero after he became the country's first cosmonaut in 1987, traveling to the Soviet Union's Mir Space Station. Now he's a refugee in Istanbul, Turkey. Faris, 65, is shown standing in front of a painting of himself as a cosmonaut. A critic of Syria's President Bashar Assad, he still hopes to return to his homeland.

More than 2 million Syrians have fled to Turkey, driven out by the fighting that erupted in their homeland in 2011. But none can claim an odyssey quite like that of Mohammed Faris.

As Syria's first and only cosmonaut, Mohammed Faris rocketed into orbit with two Soviet colleagues in 1987. He conducted experiments and photographed his country from space. By the time he returned to Syria, most everyone in the country knew his name.

Yet Faris is now a refugee himself, fleeing to Turkey after speaking out against the government's efforts to crush the 2011 uprising. He ended up in Istanbul, much better off than most, but a refugee all the same.

Faris' jet black mustache is showing some gray as he welcomes visitors to his son's office in Istanbul. The 65-year-old still has the trim build of a former fighter pilot, though, and he's easily recognizable as the astronaut in the painting that hangs on the wall.

After his trip to the Mir Space Station nearly three decades ago, Faris returned to national acclaim.

He received the "Hero of Syria" award from the late President Hafez Assad. He says he soon learned that it wasn't a good idea to upstage the ruling family.

"Hafez al-Assad, dictator, said, 'Mohammed, sit down in your house!' recalls Faris. For eight years he collected his pay as a Syrian general, but didn't work. All, he says, because Assad couldn't stand for any Syrian to be as famous as himself.

A Fan Of Russians, But Not Of Putin

As someone who lived in Russia for two years while he trained for his mission, Faris remains fond of the Russian people. He's stunned, however, by what he's seeing the Russian and Syrian militaries doing to his country today.

"I like the Russians, but I'm very upset with the dictator (Vladimir) Putin," he says. "How can he destroy children's houses, slaughter civilians?"

Faris says the Russian leader "thinks he can do to us what he did in Chechnya — the big dictator is helping the little dictator."

By "the little dictator," Faris means Hafez Assad's son and successor Bashar Assad, who responded with force to a 2011 uprising that was initially nonviolent. That soon led to a civil war, he adds.

Before fleeing Syria in 2012, Faris says he saw firsthand the carnage inflicted by the Syrian air force.

"As a fighter pilot, I know they can't distinguish between military and civilian targets, men from women and children," he says. "How can they do such things?"

Faris places primary blame for the war with the government in Damascus. But he says the attempt for a pro-democracy revolution has been betrayed at every turn by many countries, from the U.S. and Israel, to Europe, the Gulf Arab states and Russia.

Impossible though it may seem, he says getting back to Syria remains his wish.

"I have hope of returning," he says. "We are all doomed to hope, as they say, and so I hope to see my home again."

Faris has made a life of sorts in Istanbul. He lectures in schools and at conferences, and his son manages a language school.

When he talks to students, he tries to pass on some of the wonder and excitement he felt as a boy dreaming of space travel. He never fails to mention the feeling he got when he first saw Earth from space.

"There's nothing more beautiful than the Earth," he says. "I've seen it; it's our mother and it deserves to be kept in peace. I've said it many times, and I will always say it: Earth is so very beautiful, and it should be saved."