Accessibility links
Korea's Air Is Dirty, But It's Not All Close-Neighbor China's Fault : Parallels South Korea likes to point the finger at China for its pollution woes, but that's not the whole story. New research is examining how much Korean smog is caused by neighbors and how much is home-grown. 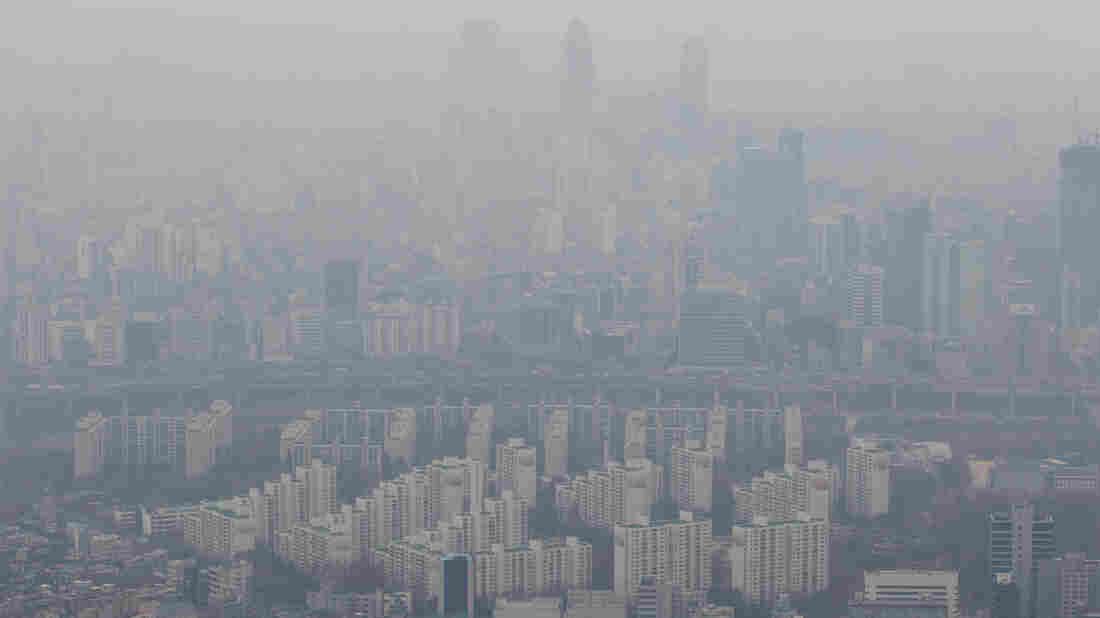 Buildings are seen shrouded in smog from the 102nd floor of Seoul's Lotte World Tower in December 2015. Bloomberg via Getty Images hide caption 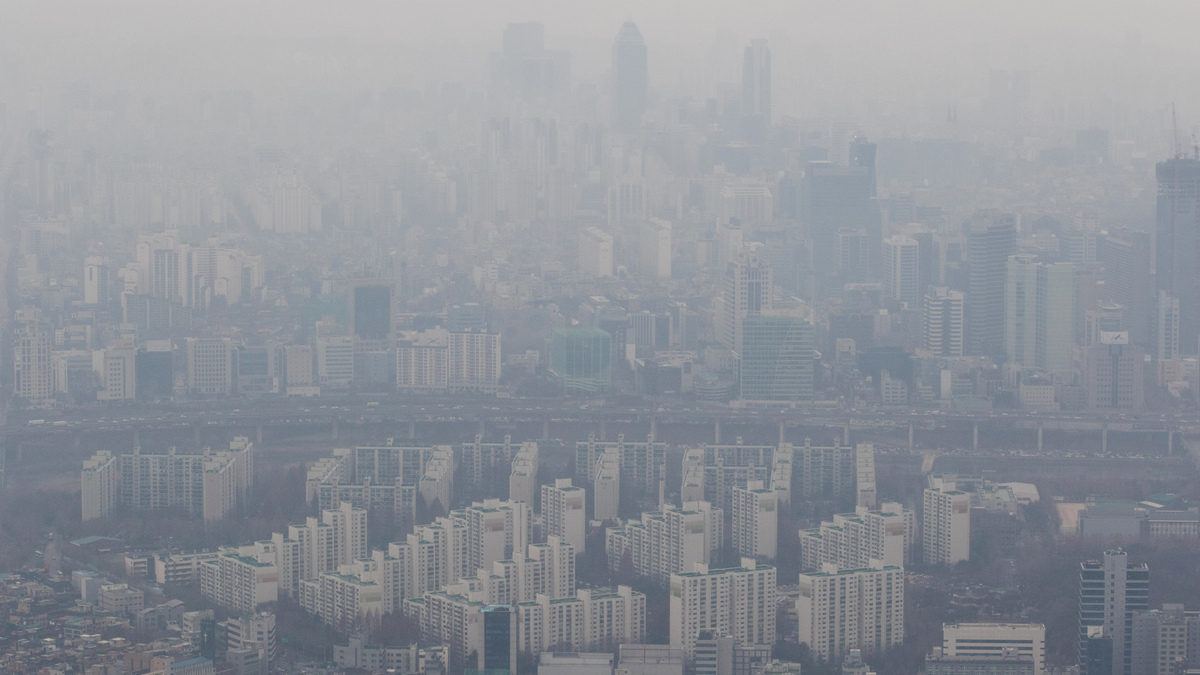 Buildings are seen shrouded in smog from the 102nd floor of Seoul's Lotte World Tower in December 2015.

Perhaps she should have. On this day — and on most days this spring — the measures of the most dangerous kind of pollution in Seoul exceed the World Health Organization's recommended limit. And Korea ranks near the very bottom for air quality in Yale University's latest 180-country Environmental Performance Index.

"People say the [poor] air quality here these days is because of China," she says, watching her baby play.

An estimated 1.3 billion people in the East Asia and Pacific region are breathing unsafe, unclean air each day. Pollution is linked to heart disease, some cancers and early deaths. The elderly and children are especially vulnerable to pollution-related illness.

Neighboring China almost always gets the blame for the dirty air in Korea. Pollution numbers there are far worse than Korea's, and this complicates Korea's efforts to clean its own air.

"There's no doubt air pollution knows no borders, of course," says Dr. Jonathan Samet, an epidemiologist who heads the Institute for Global Health at the University of Southern California. China's coal plants, the sheer scale of its population and abundant vehicle emissions contribute to dirty air across the region.

And even the natural stuff — yellow dust generated in China's northern deserts — picks up industrial pollutants when it wafts over from west of Korea.

"What you have is the combination of what is being generated within Seoul and within the broader, very industrial environment of Korea, added onto by transport of pollution from China," he says. "So, yes, Koreans can point the finger at China — but you know it has to be pointed internally as well."

South Korea's reliance on coal plants and diesel fuel for its vehicles contributes to local pollution. About 50 coal plants already help power the country, and it has pledged to build a dozen more by 2021.

So just how much pollution drifts over and how much is home-grown are questions scientists at NASA are trying to help answer. Last month, NASA jets flew up and down the Korean coastline, measuring air quality in a new study in partnership with Korea called KORUS-AQ. 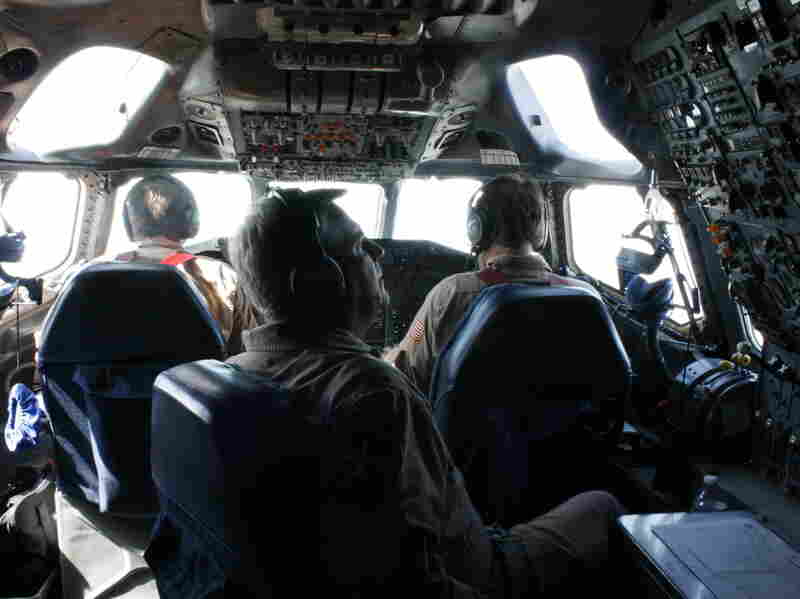 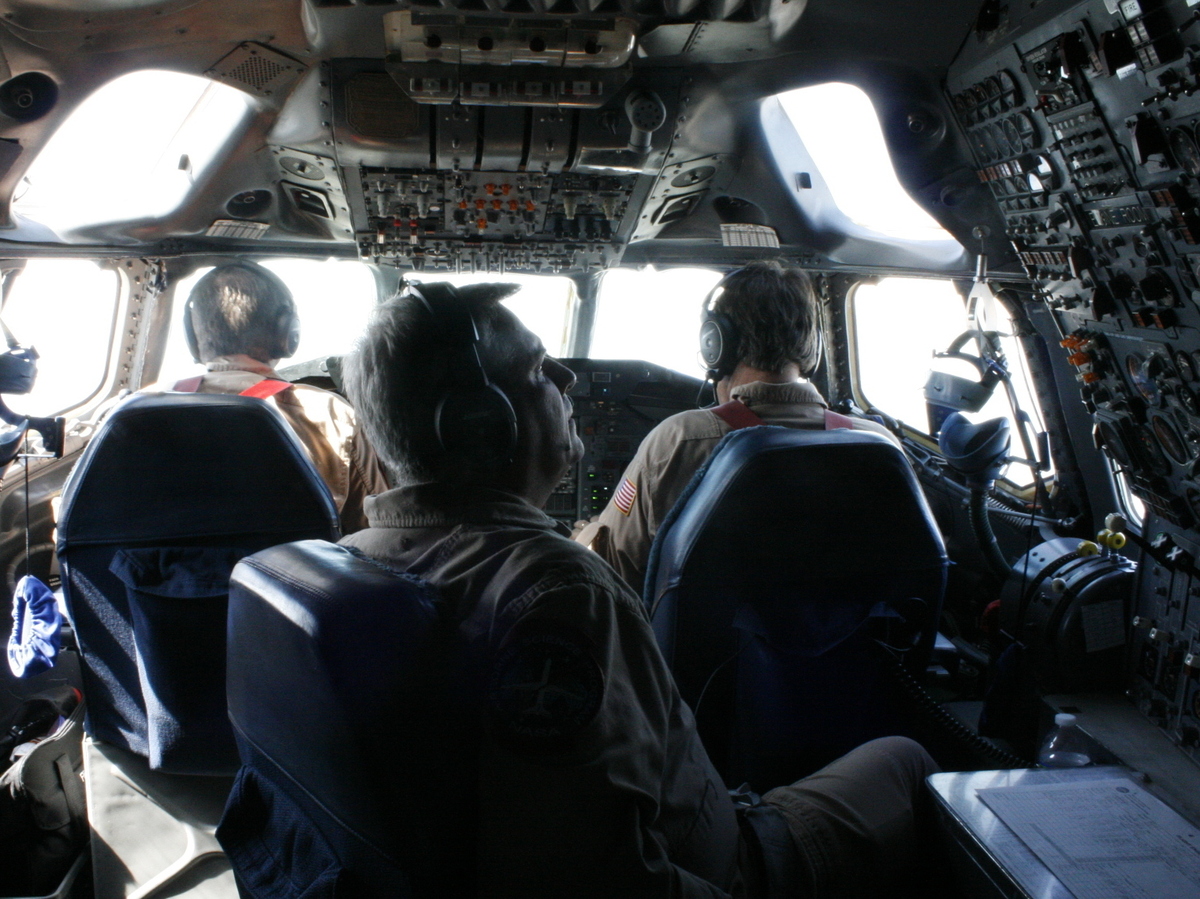 NASA scientists measure air quality aboard one of NASA's three "flying air quality labs" over the Korean peninsula in April.

"By being able to go over the adjacent water and then over the [Korean] peninsula, we can begin to do a much easier job of separating external influences from internal sources in the continent," says Jim Crawford, a NASA mission scientist on the project.

Dozens of scientists sample the the air with instruments aboard the jets. They repeat the runs at various altitudes, flying as low as 1,000 feet.

Among the questions they're looking at: "How big of a challenge is it when you have high particle loadings, do they mask the pollution nearest to the surface and are we adequately seeing it with satellites?" Crawford says.

Of particular concern is fine particle pollution known as PM2.5, the microscopic particles that enter the bloodstream when inhaled. PM2.5 can be laden with lead and arsenic, among other pollutants. And East Asia's concentrations of PM2.5 are the highest in the world, according to World Health Organization rankings.

There is virtually no discussion in the [Korean] media about the holistic nature of the problem.

"This is a problem of our megacities. You put millions of people together, they're all driving vehicles, there's industry. We just exceed the capacity of the environment to dilute," says Samet.

To put the problem into context, we took a look at pollution in Beijing, Shanghai and Seoul compared with two U.S. cities — the biggest, New York, and one of the most polluted, Los Angeles. When these Asian megacities' pollution is measured by the Environmental Protection Agency's Air Quality Index, the numbers reveal the stark contrast between the air Asians are breathing in these cities and the air Americans breathe.

For example, in Seoul in 2015, the air quality over a 24-hour period averaged "unhealthy for sensitive groups" or worse on 53 days. Los Angeles counted only seven days in that category. In New York, there was no single day's air quality in that "unhealthy" range.

Still, it's tough to solve a problem that's not fully acknowledged. In a new study by the Korean Economic Institute examining Korean attitudes and media coverage of air pollution, researcher Matthew Shapiro, of the Illinois Institute of Technology, found Korean media don't cover smog as a chronic problem — which the data show it is — but instead as disparate spikes during the year. And when pollution is discussed in the press, the blame tends to shift elsewhere.

"[PM2.5 is framed] as a China-based problem. More importantly, there is virtually no discussion in the media about the holistic nature of the problem," writes Shapiro.

The South Korean president calls the country's poor air quality "a grave issue." But little beyond warning people to be careful has been done to address it. The levels of particulate matter in Seoul's air have stayed stubbornly steady in recent years.

Government officials in recent weeks said they were considering closing coal-fired power plants that were more than 40 years old in a move to tackle the pollution problem, but haven't made a decision. Meanwhile, "The same ministry is pushing to build nine more coal plants," Greenpeace East Asia's Minwoo Son points out.

"There has to be a much more complex understanding of the problem conveyed to the general public. If everyone is saying, 'Wear the mask, keep your kids indoors and wait until tomorrow,' that's not a long-term solution," says Shapiro.

He argues that the Korean media's focus on cyclical spikes and preventative measures — rather than the comprehensive causes of pollution such as reliance on fossil fuels — delays policy solutions.

Out at the park, longtime elementary schoolteacher Choi Wonjung says she doesn't need numbers to convince her of the issue.

"The kids cough a lot more than they did before," she says.

Pollution is pernicious — and the worst kind is too tiny to be seen. But its effects are felt every single day.