Accessibility links
On Afghan Journalist Zabihullah Tamanna: 'He Had A Great Eye For A Story' : Parallels NPR's Philip Reeves remembers Zabihullah Tamanna, a brave Afghan journalist who brought compassion to his work. Tamanna was killed along with NPR photojournalist David Gilkey in Afghanistan on Sunday. 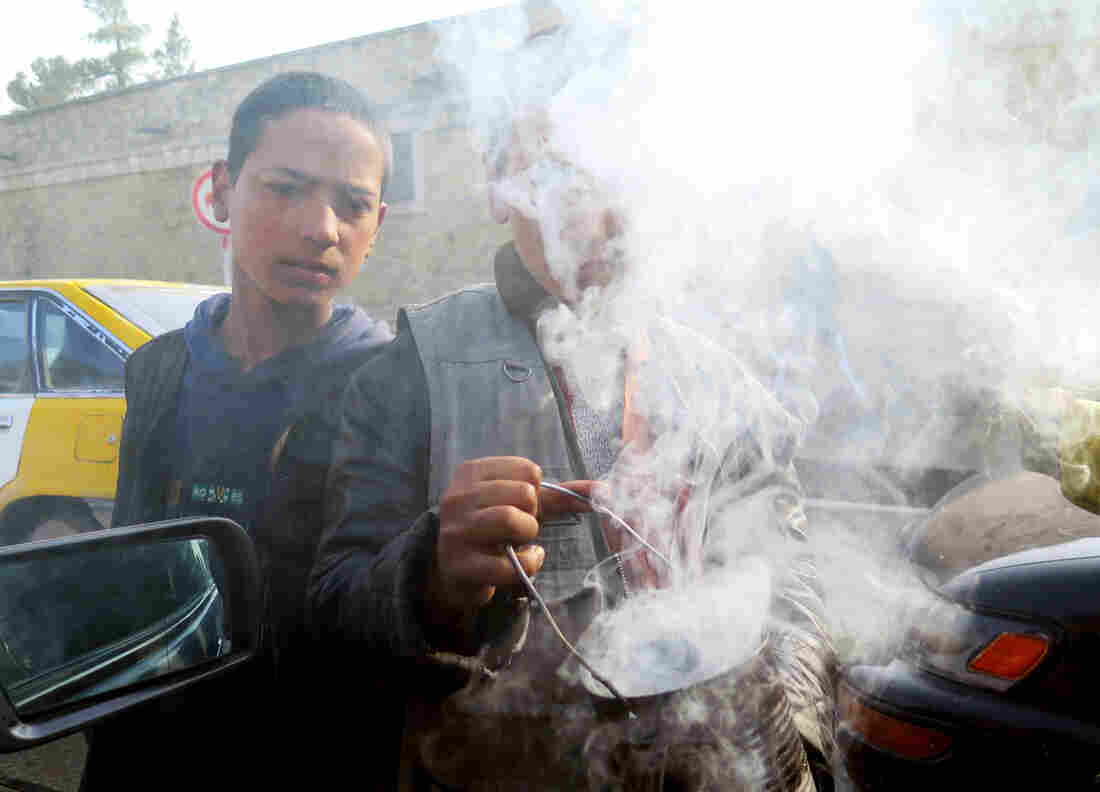 Young boys wave smoldering tin cans at cars in Kabul, Afghanistan. The smoke from the seeds inside the cans is believed to ward off evil. Zabihullah Tamanna for NPR hide caption 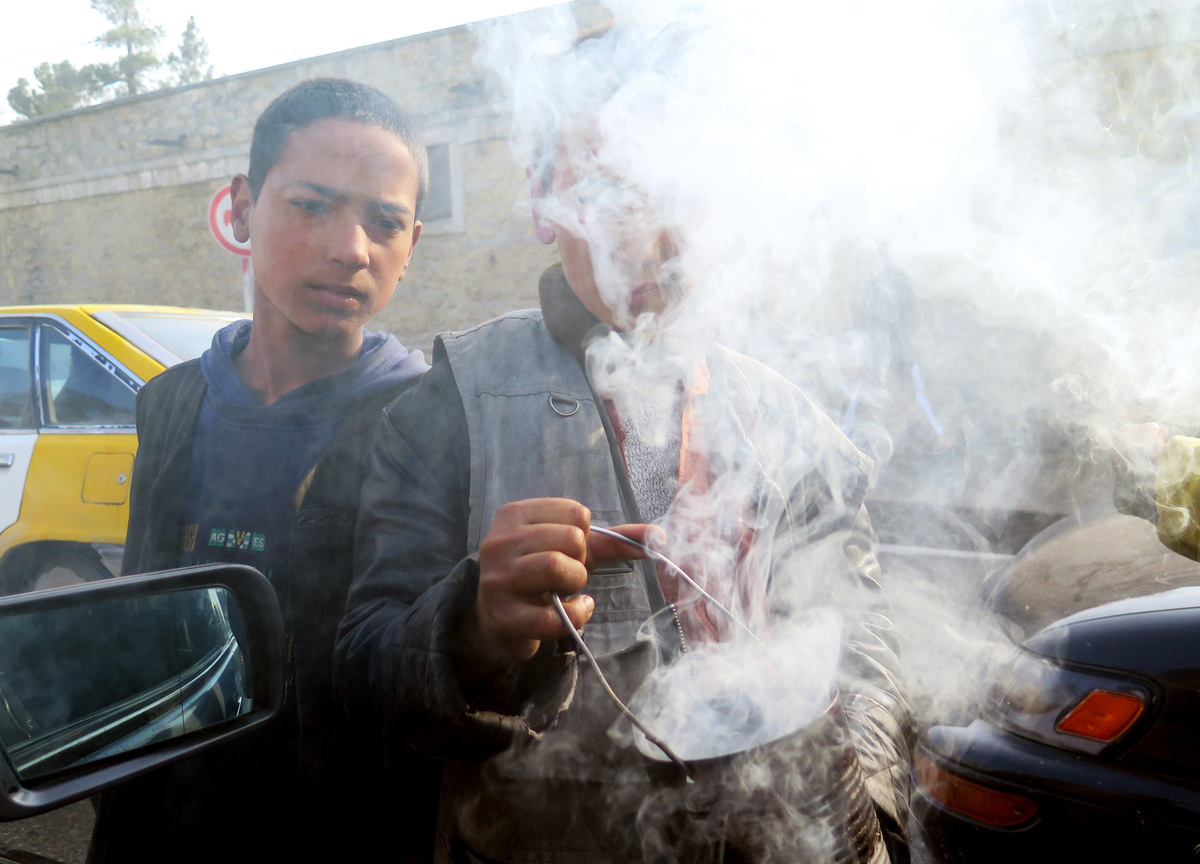 Young boys wave smoldering tin cans at cars in Kabul, Afghanistan. The smoke from the seeds inside the cans is believed to ward off evil.

A few months back, I asked a favor of my friend and NPR colleague Zabihullah Tamanna. We'd just spent a busy day going from interview to interview in Kabul. I had some urgent writing to do. Would he mind going out onto the streets and taking some photographs?

For those who live and work in conflict zones and war zones, it's easy to become somewhat numb. Violence and danger can corrode your sense of humanity. But the pictures that Zabihullah took that day were the work of a journalist whose compassion was entirely intact. 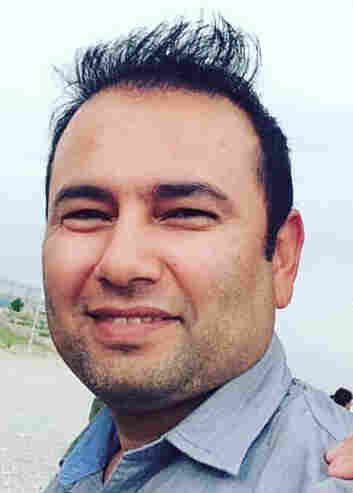 Zabihullah Tamanna, shown here in Afghanistan on June 2, was an accomplished journalist and a father of three. Monika Evstatieva/NPR hide caption

Zabi spent more than an hour with a group of boys who earn a pittance by wandering from car to car waving tin cans containing smoldering seeds. (Some Afghans believe the smoke from these seeds wards off evil.) He returned, handed me the camera, and quietly remarked that he thought he'd captured some "nice images."

Zabi, who was killed in Afghanistan on Sunday along with NPR photojournalist David Gilkey, was far more than just a "translator-fixer" for NPR. He was one of a group of Afghan journalists who carry on their crucial work despite great and constant personal risk. They have extraordinary courage.

I first met Zabi early last year, on the recommendation of an Afghan colleague. I was looking to hire a journalist to help me report the continuing tragedy in Afghanistan during my occasional visits there. He'd earned a reputation as an excellent freelancer who'd worked for some years with China's Xinhua News Agency.

Why David Gilkey Was In The Roughest Part Of Afghanistan

He was a tall man with a warm smile, who somehow managed to couple a casual manner with a quiet sense of authority. It soon became clear that he had a great eye for a story, and that people from every level of society simply liked and trusted him, an essential quality in the journalism business.

Zabi seemed at ease with everyone; he persuaded senior politicians, young male migrants heading to Europe, female victims of war, and many, many more to speak into NPR's microphone — and, by doing so, to shine a light on their nation's unending conflict.

On one unforgettable occasion, he managed to persuade an Afghan people smuggler to sit down and tell us all about his illicit trade over a lunch of grilled chicken and green tea.

Zabi was a man of many talents. He could have been a doctor (he studied medicine for a while). He could have been a lawyer (he had a degree in law and politics). In the end, he chose journalism. He plied his trade with a deep concern for accuracy, an appetite for hard work, great photographic skills and a lovely sense of humor.

In particular, he proved a true master of the tricky art of hacking a path through the forest of red tape that the Afghan authorities wrap around foreign journalists. Zabi told me he deeply disapproved of the widespread practice of paying bribes for documentation. To him, getting accreditation the legal way was a matter of pride. He never lost his temper — even at the most frustratingly stubborn of pen-pushers. And he never moaned.

Foreign correspondents simply cannot operate without people like Zabi. He was one of many behind-the-scenes journalists out in the field who often get far less recognition than they deserve. Zabi was the best in the business. He will be remembered by his NPR colleagues with deep gratitude and respect. And he will be greatly missed.

He is survived by a wife, and three young children — two sons and a daughter.

You can see footage here of a service held for Zabi in Kabul.