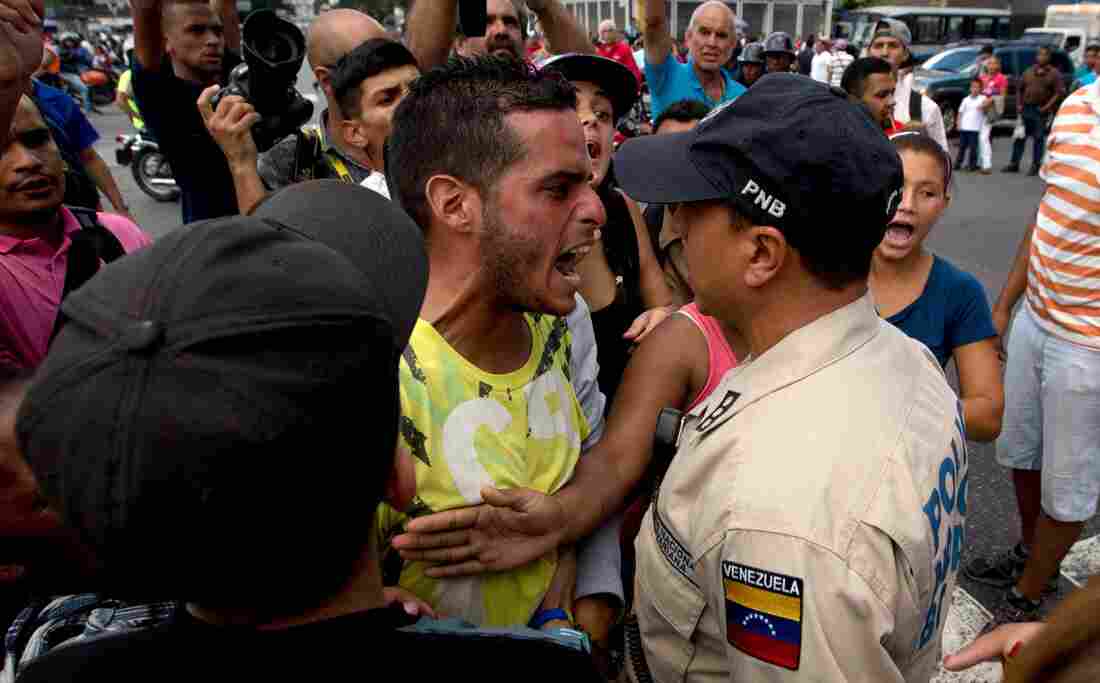 An angry man outside a grocery store argues with a policeman in Caracas, Venezuela, on June 8 amid the country's ongoing food shortages. After waiting for hours, customers began protesting, an increasingly common occurence in Venezuela, which is suffering a severe economic crisis. Fernando Llano/AP hide caption 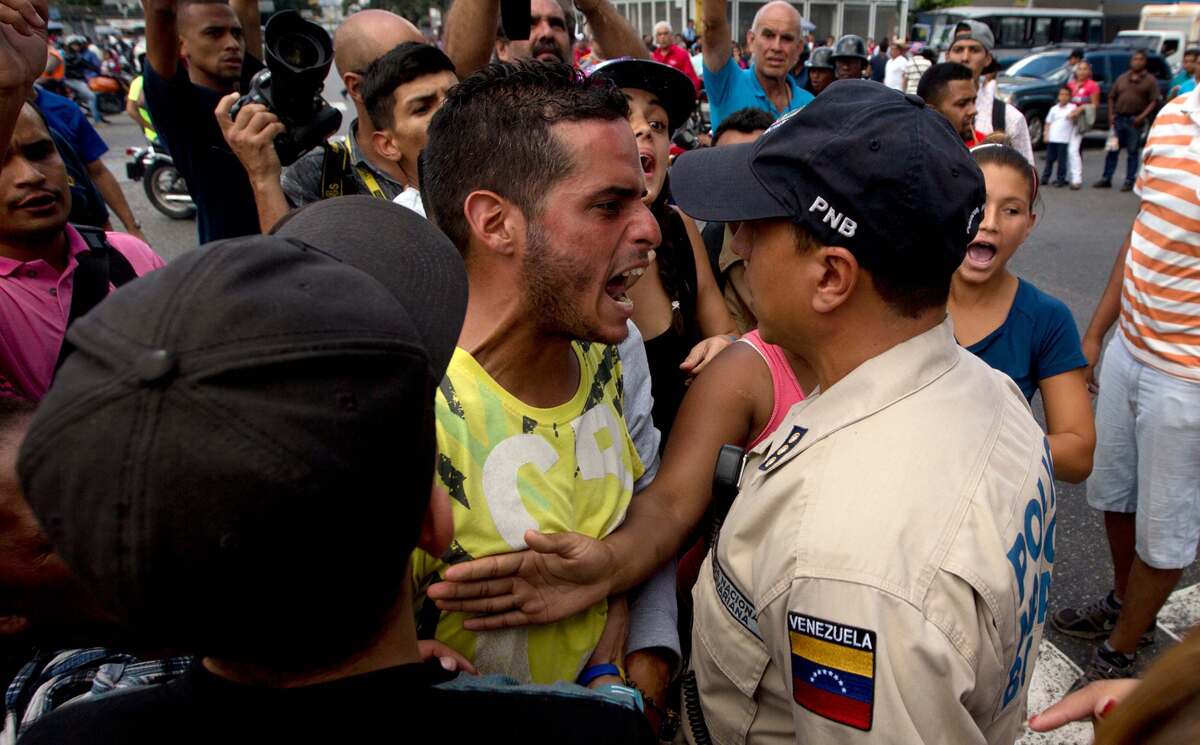 An angry man outside a grocery store argues with a policeman in Caracas, Venezuela, on June 8 amid the country's ongoing food shortages. After waiting for hours, customers began protesting, an increasingly common occurence in Venezuela, which is suffering a severe economic crisis.

Although home to the world's largest oil reserves, Venezuela seems to be running out of almost everything these days: food, medicine, electricity, even beer.

Economic conditions have become so bad that Venezuelans are ransacking grocery stores — even though many are largely empty. A Venezuelan monitoring group, Observatory for Violence, says there are about 10 lootings per day around the country, with food riots sometimes turning deadly.

Four people were killed during separate incidents last week as looters clashed with security forces. More than 400 people were arrested in the coastal city of Cumaná, which was briefly placed under a de facto curfew after 20 stores were cleaned out.

One of the hardest-hit places is the western city of Maracaibo.

Due to nationwide electricity rationing, some Maracaibo neighborhoods go without power for up to 12 hours a day. An intersection is utter chaos because there's a power outage and the traffic lights don't work.

The power outages knock out fans and air conditioners in a city where the temperature often tops 100 degrees.

At a ramshackle house, an overnight blackout forced all 14 adults in the Ruiz household, plus a scrum of kids, out of their bedrooms and into the street to seek relief from the heat.

When the power came back on, they rushed inside to wash clothes.

Family patriarch Rodolfo Ruiz, a 79-year-old retired school clerk, is groggy from lack of sleep. His kidneys are failing and when the lights go out, so does his dialysis machine.

"Dialysis is the only thing keeping me alive," he says.

Many Venezuelans are now eating fewer than three meals per day and have taken to foraging for mangoes and other fruits to satiate their hunger. Others set up roadblocks to rob food delivery trucks. 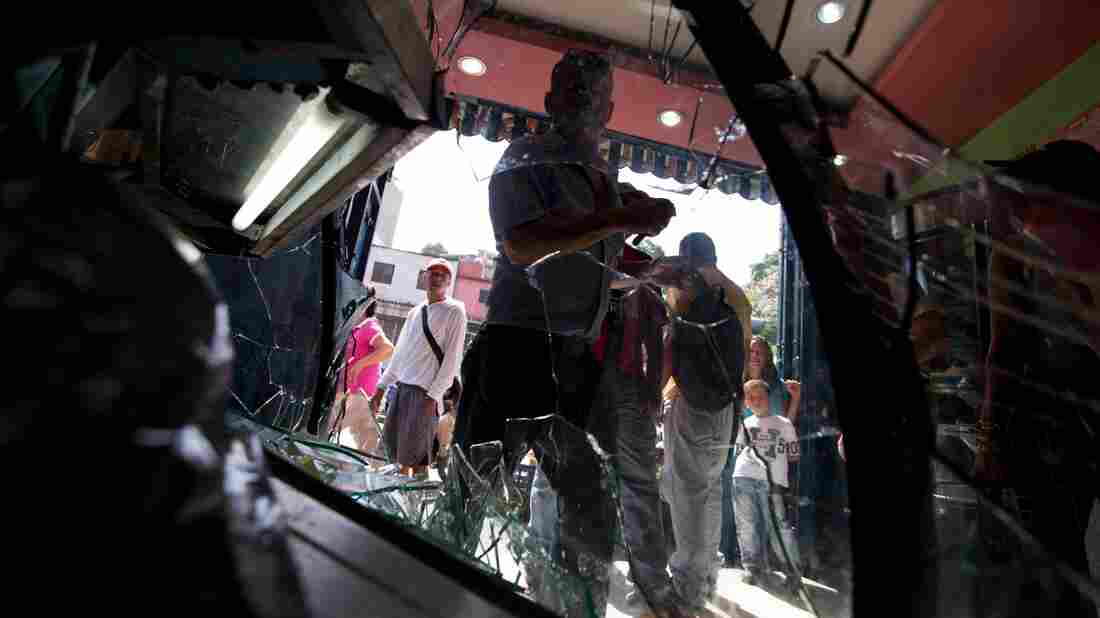 Customers enter a bakery in Caracas, Venezuela, on June 10, a day after it was looted.Bakeries and grocery stores are being ransacked in growing food-related violence in recent weeks. Fernando Llano/AP hide caption 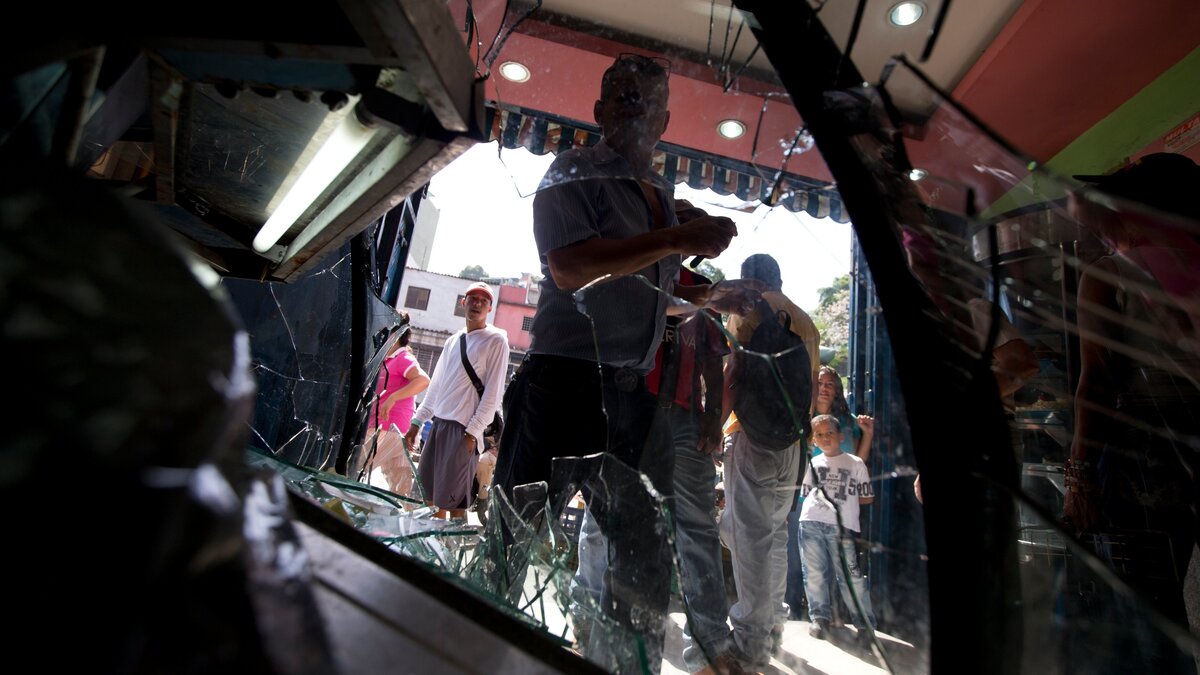 Customers enter a bakery in Caracas, Venezuela, on June 10, a day after it was looted.Bakeries and grocery stores are being ransacked in growing food-related violence in recent weeks.

The calls for President Nicolás Maduro to resign are growing louder. Critics blame his socialist policies that include the expropriation of farms and food processing plants, plus subsidies that make food artificially cheap and discourage production. But Maduro blames the opposition, claiming it is trying to sabotage the economy, as well as the low price of oil, which accounts for nearly all of the country's export income.

Maracaibo used to be a showcase for progress. It sits next to Lake Maracaibo, where Venezuela first struck oil a century ago. Maracaibo built the country's first bank, movie theater and public lighting system.

None of that is apparent now.

The country can't produce enough food to feed its 31 million people and is too broke to import. Government-subsidized groceries are cheap, but in Maracaibo they are often smuggled into nearby Colombia — just 80 miles away — where they can then be sold for big profits.

Food lines, like one outside a state-run supermarket, spill into Maracaibo's streets.

As she waits in the blistering heat, Maria Luisa Barrios shields herself from the sun with a piece of cardboard. But soon she finds out there's no food left in the store, only cleaning supplies.

"All they have is detergent," she says. "How am I going to eat detergent?"

The Government Scales Back

At Maracaibo's City Hall, the building was closed on a recent Friday morning. To save electricity, Maduro in April ordered public employees to work just two days per week. That didn't help matters, and the decree was lifted this month — though government workers are still on reduced hours.

Mayor Eveling Rosales is at the Transportation Department, one of the few functioning city offices. She claims the Maduro government is sabotaging her city.

Oil royalties and other federal monies make up 80 percent of her budget. But Rosales claims Maduro is withholding these funds because she belongs to an opposition party that's trying to oust him through a recall election.

The Maduro government did not respond to NPR's requests for comment. But the president often blames the country's crisis on the opposition, which he claims is hoarding food and bombing power plants. Asked about this, Rosales just rolls her eyes.

Venezuela "is upside-down," she says. "It's like Alice in Wonderland."