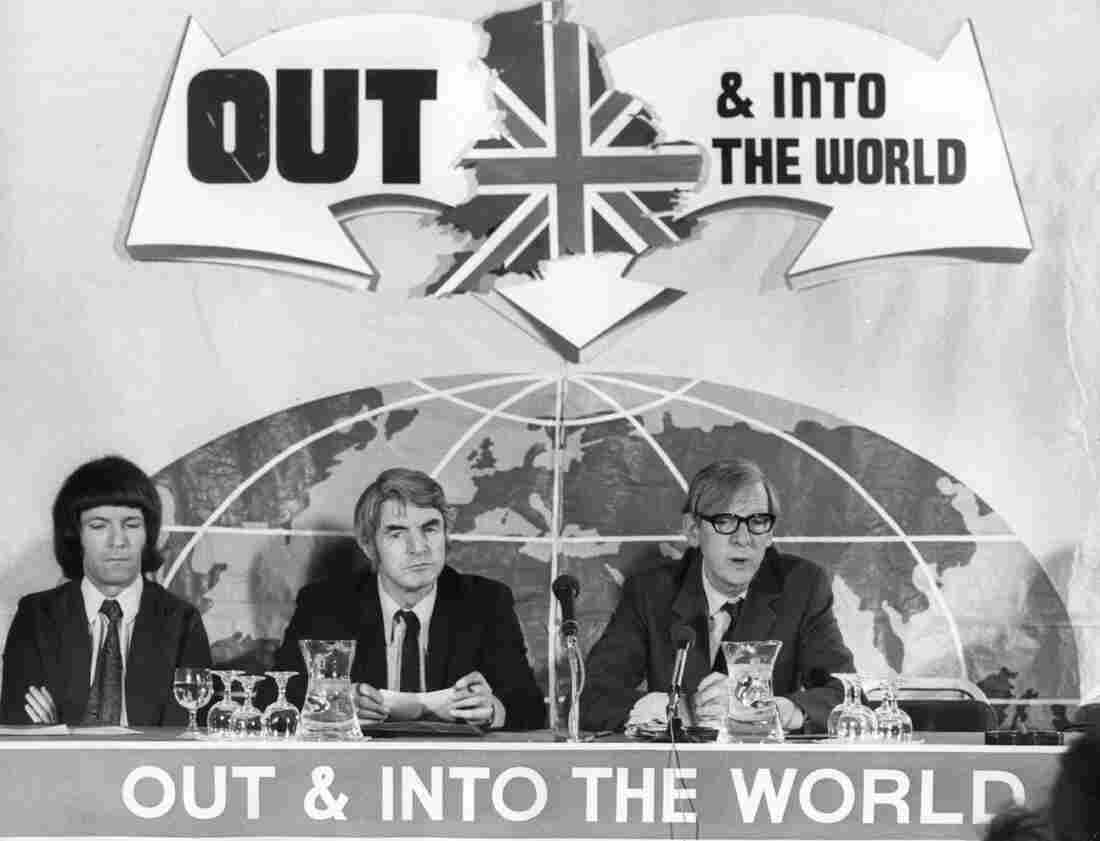 Great Britain has always been ambivalent about being tied to Europe. The U.K. joined the European Economic Community in 1973, and two years later, it held a referendum on whether it should leave. Here, members of the Labour Party hold a 1975 news conference to explain why they favor pulling out of the European body. However, U.K. citizens voted 2 to 1 to remain in the EEC at that time. J. Wilds/Getty Images hide caption 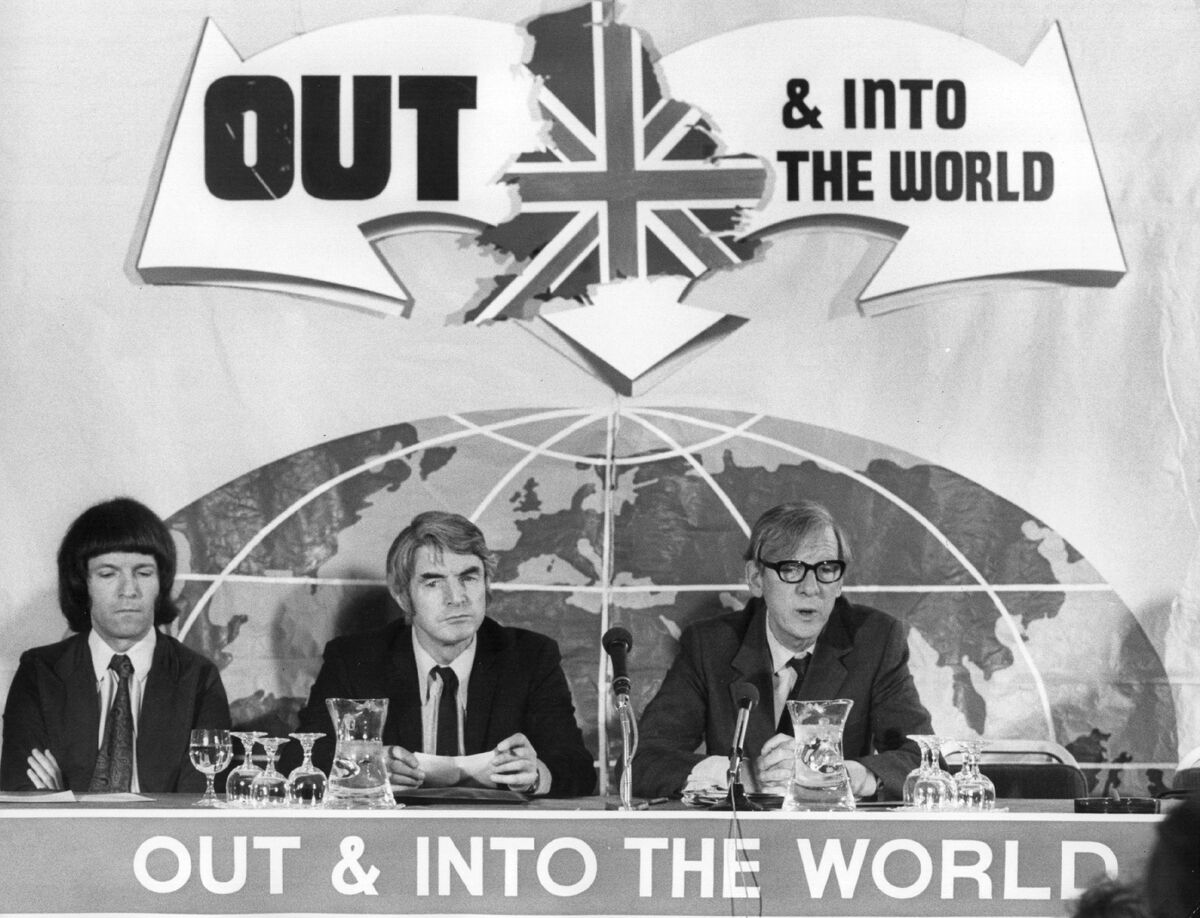 Great Britain has always been ambivalent about being tied to Europe. The U.K. joined the European Economic Community in 1973, and two years later, it held a referendum on whether it should leave. Here, members of the Labour Party hold a 1975 news conference to explain why they favor pulling out of the European body. However, U.K. citizens voted 2 to 1 to remain in the EEC at that time.

Editor's Note: This story was originally published Wednesday and has been updated to include Britain's decision to leave the EU.

Great Britain once ruled the largest empire in history, with colonies and dominions that spanned the globe, political and economic influence that wildly exceeded its modest size. Generations of schoolkids were raised on the mantra, "The empire on which the sun never sets."

World War II marked the beginning of the end, and the not-so-United Kingdom voted Thursday to cut itself loose from the European Union, the latest in a long line of moves that could shrink its international presence.

The referendum symbolized Britain's sweeping turn from an outward-looking, global power to a more insular North Sea island uncertain of its place in the world. "From Great Britain to Little England," as many headline writers have summed it up.

Prime Minister David Cameron, who wanted to stay in the EU, thought the referendum would silence critics — many in his Conservative Party — who regard the EU as a shackle on Britain that diminishes its sovereignty. Before the vote, he framed the ballot in stark terms that tapped into Britain's past glory:

Shortly after the result was announced Friday morning, Cameron said he would be leaving his office by October, a dramatic fall for a politician who led his party to a resounding election victory just last year.

Despite the loss of global clout, Britain still boasts a resume few can match: a permanent seat on the United Nations Security Council, a nuclear arsenal and a "special relationship" with the United States.

The View From Luxembourg, Where A 'Brexit' Is Unthinkable

Brexit Vote Reveals The Generation Gap In The United Kingdom

London is a financial capital where multinational firms and foreign billionaires comfortably invest their money. The U.K. has the second-largest economy in Europe, having surpassed France and trailing only Germany.

A history of Euro-skepticism

Yet the U.K. has always been an ambivalent member of the Euro club that emerged after World War II. Britain declined to join the EU's forerunner, the European Economic Community, at its 1957 founding. Britain signed up in 1973 — and promptly held a referendum on leaving two years later. It voted overwhelmingly to stay that time.

As a general rule, U.K. citizens who are younger, better educated and live in the wealthier south were more likely to favor staying in the EU, often citing economic benefits.

Those who are older, working class and live in less prosperous regions were more likely to favor leaving. The EU, based in Brussels, imposes too many regulations and has created conditions that allow in too many immigrants, they said.

Yet those battle lines were far from absolute.

"I've been skeptical of [EU membership] for some years and that skepticism has now morphed into outright opposition due to what I regard as the arrogance, the wastefulness, the corruption and the incompetence of the Brussels government," British author Frederick Forsyth told NPR's Morning Edition earlier this week.

Forsyth dismissed the argument that Britain will suffer economically by opting out of the European Union, predicting a mix of benefits and burdens.

"None of us have a crystal ball," Forsyth added. "So when they say, 'In 10 years this will happen,' they haven't a clue what they're talking about. They're just plucking figures out of clear blue sky."

Proponents of leaving also point to European states like Norway and Switzerland that have been highly successful without joining the EU.

The risks of leaving

But those countries never had Britain's larger global ambitions, the other side argues.

"As a single country we would have minimal influence on world affairs. Does anyone seriously think the prospect of British sanctions would alarm [Russian President] Vladimir Putin, or have persuaded Iran to curtail its nuclear program?" Martin Fletcher, the former foreign editor of the Times of London, wrote in a Facebook post before the vote.

"We would be willfully removing ourselves from a single market of 500 million people without the faintest idea whether, or on what terms, we would be allowed to continue trading with 27 E.U. states who would want to punish us. Why on earth would we take such a monumental risk?" he added.

The "Leave" supporters claimed that the EU has chipped away at Britain's sovereignty and that cutting ties would make Britain stronger and freer to act as it chooses. Their motto was "Take Control."

That attitude has long been a current in U.K. politics.

"The outward-looking, fully engaged Britain that 'punched above its weight' has already faded away, and not everybody in London is very sorry about this turn of events," U.S. columnist Anne Applebaum wrote last year.