Accessibility links
In Armenia Visit, Pope Aims For Reconciliation In A Tense Region : Parallels Last year, Pope Francis called the Ottoman Empire's slaughter of Armenians "the first genocide of the 20th century," sparking a diplomatic spat with Turkey. He begins a 3-day visit to Armenia Friday. 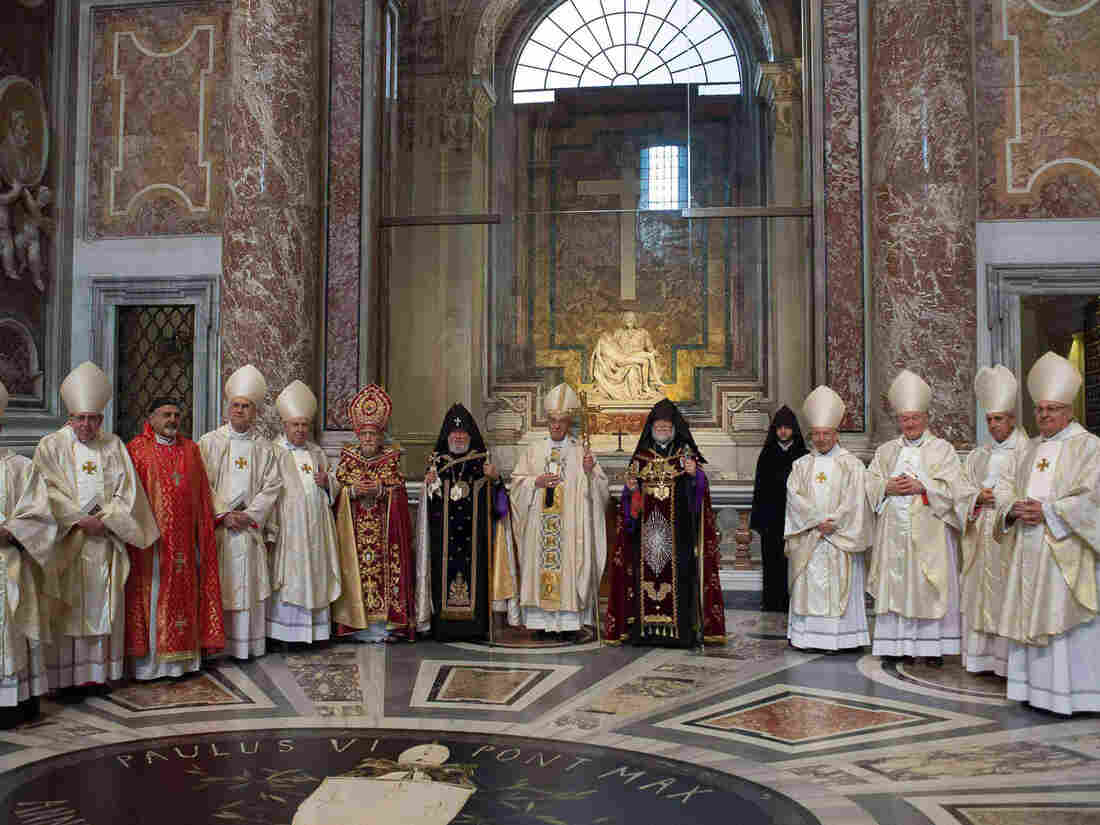 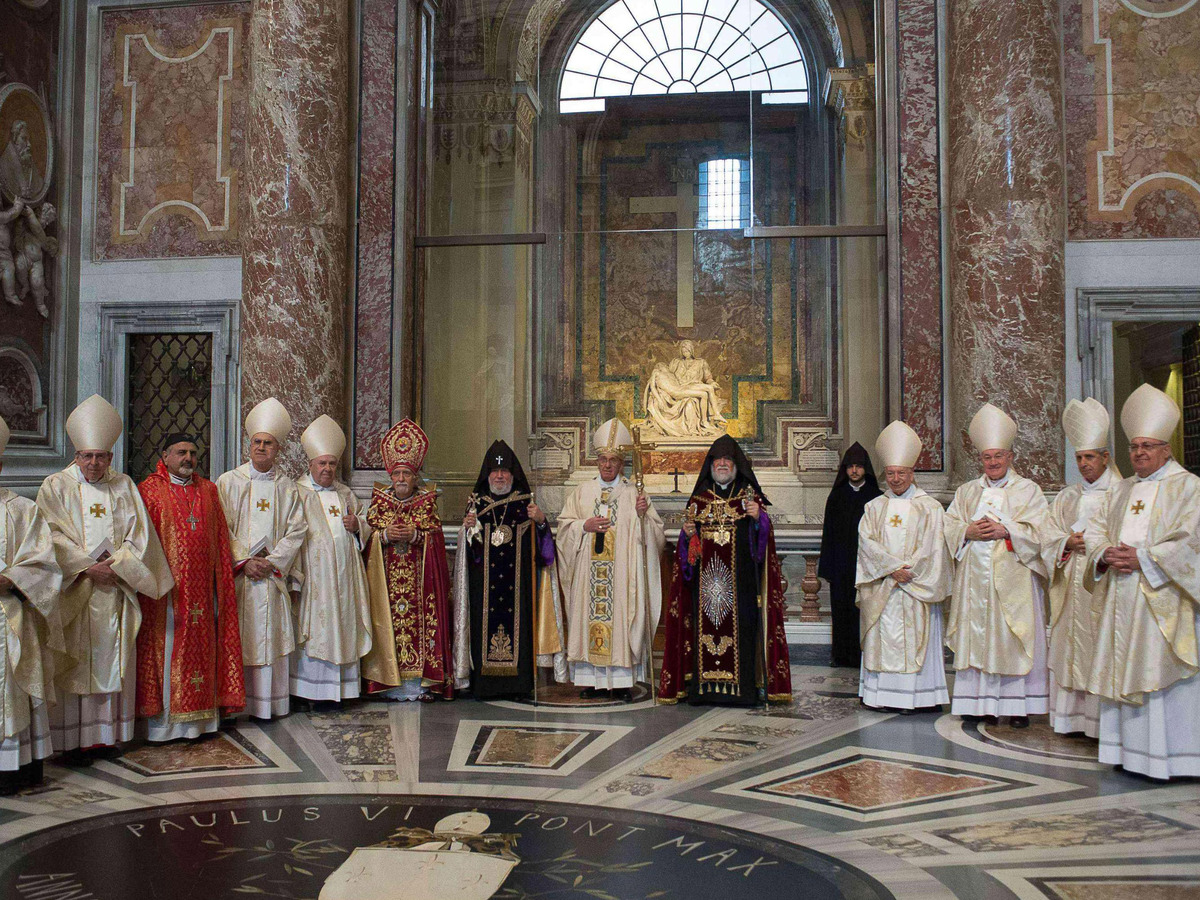 Pope Francis begins a visit to Armenia on Friday, one of the "peripheries" of the world that are dear to him. He arrived in the capital, Yerevan, on Friday afternoon, and will spend three days in the small country whose geography made it a land of conquest by powerful empires and whose people have greatly suffered for their Christian religion.

The visit will highlight the strong ecumenical ties between the majority Orthodox and smaller Catholic Christian communities, as well as promote reconciliation in a tense region that straddles Europe, the Middle East and Russia.

In his native Argentina, Francis developed close ties with the Armenian community, whose members had fled persecution and massacres.

Last year, Francis marked the centenary of the Ottoman slaughter of Armenians in a solemn ceremony, in which the mournful sounds of the Armenian liturgy echoed through St. Peter's Basilica. Concealing or denying evil, said the pope, is like allowing a wound to keep bleeding without bandaging it.

"The first genocide of the 20th century," he said in his homily, "was against you, the Armenian people."

Those words infuriated Turkey, which accused the pope of spreading hatred, and Ankara recalled its ambassador to the Holy See for a full 10 months. 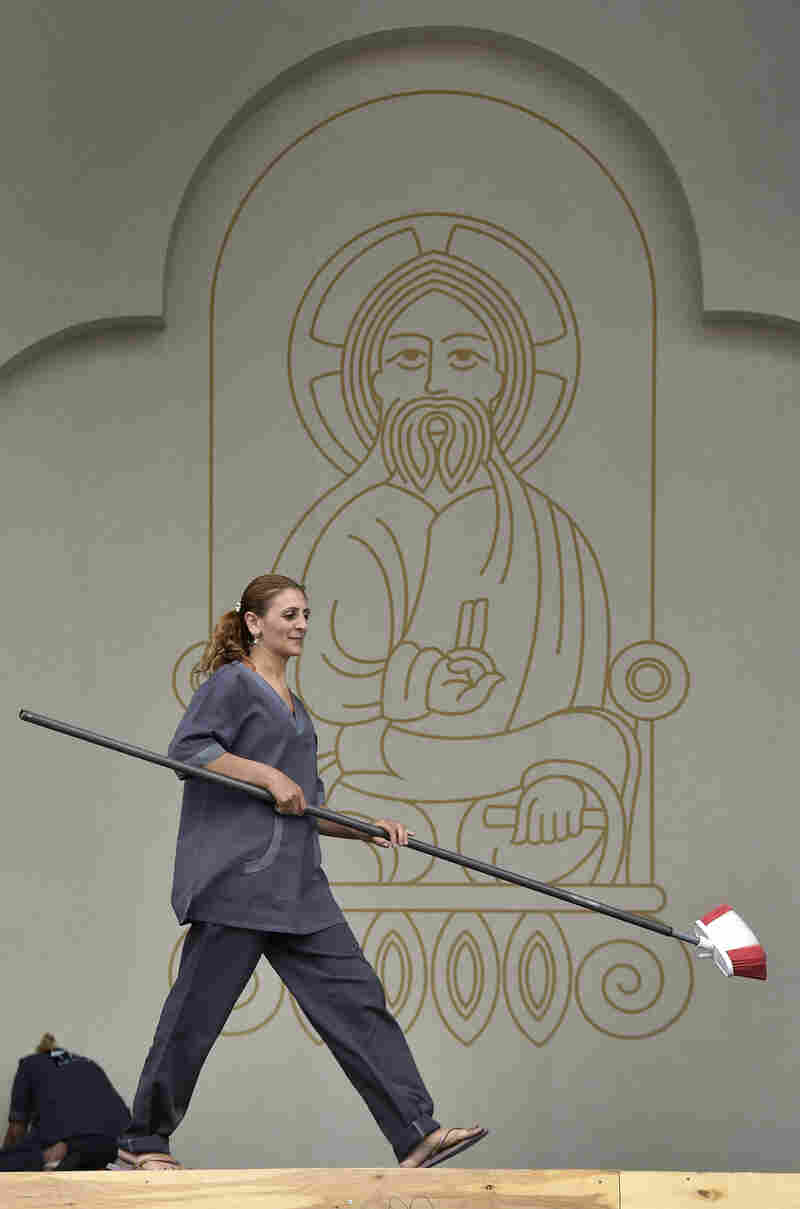 A worker puts final touches on the podium at Yerevan's Republic Square on June 23, where Pope Francis is to lead a service. The pontiff arrived in Armenia for a three-day visit on Friday. Alexander Nemenov /AFP/Getty Images hide caption

Historians widely agree that up to 1.5 million Armenians were killed, but Turkey vehemently rejects the accusation of genocide, claiming the number of dead was smaller and that they were victims of civil strife.

The Rector of the Pontifical Armenian College in Rome, Monsignor Nareg Naamo, says the pope's statement was extremely important.

"His words acknowledging the genocide were received with immense joy by the Armenian people," said Naamo, who belongs to the minority Armenian Catholic community. "And now, Francis is visiting Armenia — the first Christian nation."

The landlocked country in the Caucasus adopted Christianity in the year 301, 12 years before the emperor Constantine legalized it in the Roman Empire.

The Apostolic Armenian Church is part of the oriental Orthodox churches and is seen the custodian of Armenian national identity.

For most of the last century, Armenia was under Soviet rule, suffering religious repression. Today, with the exception of Georgia, Armenia is surrounded by Muslim countries. It shares borders with Turkey, Iran and Azerbaijan, with which it has a long-simmering conflict over the Armenian enclave of Nagorno Karabakh.

Armenia has a population of 3 million, and a diaspora of some 7 million across the world.

Naamo, who was born in Syria, says his people have defended their national and religious identity since antiquity.

"We are a people who suffered genocide, so many attacks, but we're here," he says. "Armenians are all over the world, there's an Armenian state. We are the sons and daughters of the resurrection."

During his visit, Francis will also meet Syrian refugees and is expected to speak out again on the modern-day slaughter of Christians and other minorities by Islamist extremists. The pope will also visit a monastery in the foothills of Mount Ararat, which, according to the Bible, is where Noah's Ark came to rest.

There, near the Turkish border, he will release a flock of doves as a sign of peace and reconciliation in the region.

Massimo Faggioli, a professor of Catholic Church history, says that in visiting Armenia, Pope Francis is also sending a specific message to a geopolitically strategic region — that "religion should not be part of a global, colonial enterprise."

Faggioli says the pope is very critical of the way both Russia and Turkey mix nationalism with their respective religions, the Orthodox Church and Islam.

"Armenia is in the middle, geographically and historically, between Turkey and Russia," he says. "So going there, Pope Francis is more or less poking a finger into the eye of the most important nationalist actors in the area."

The pope is likely to spark further tensions with Turkey when he visits the genocide memorial in Yerevan on Saturday. But in a possible sign of diplomatic compromise in a briefing ahead of the papal trip, the Vatican spokesman declined to use the word "genocide" — preferring the Armenian term Medz Yeghern, which means "the great crime" or "the great evil."