Accessibility links
Russia's Ex-Spy Chief Shares Opinions Of His American Counterparts : Parallels Vyacheslav Trubnikov was a Soviet and Russian spy for more than three decades. He found some of his American adversaries worthy rivals. Others, not so much. 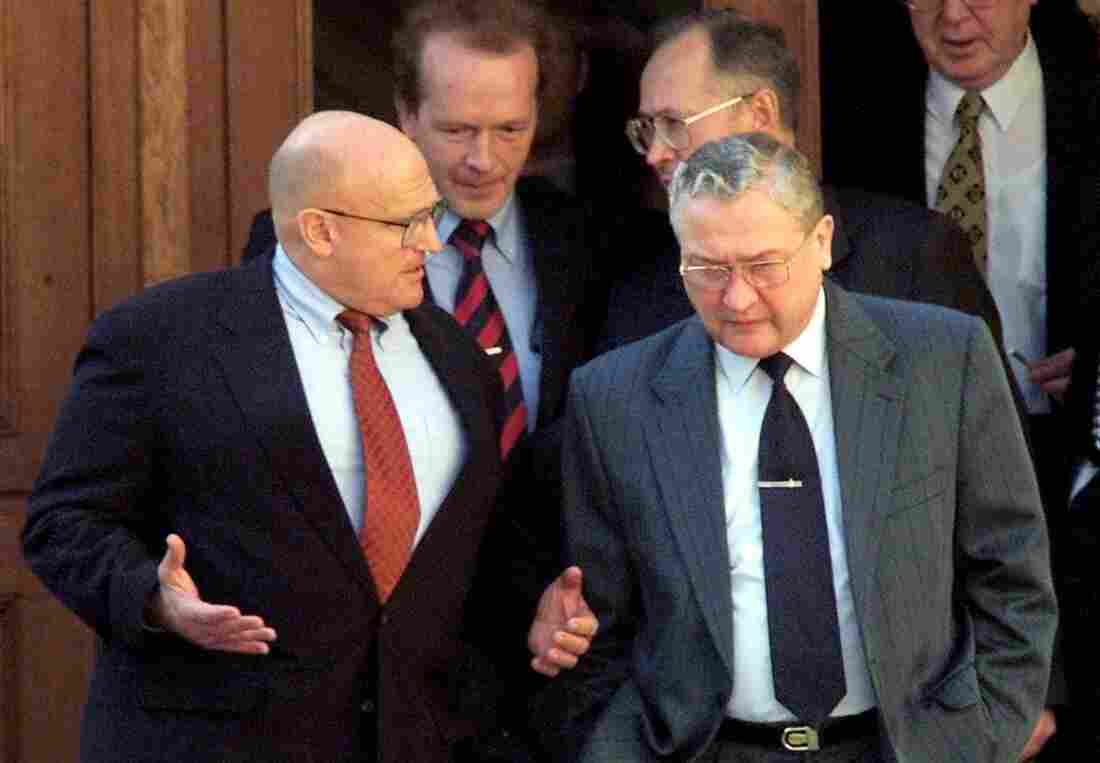 Vyacheslav Trubnikov (right) was head of the Foreign Intelligence Service, Russia's equivalent of the CIA, from 1996 to 2000. He's shown here speaking with U.S. Deputy Secretary of State Richard Armitage in 2001 in Moscow. Trubnikov was Russia's deputy foreign minister at the time. Alexander Zemlianichenko/AP hide caption 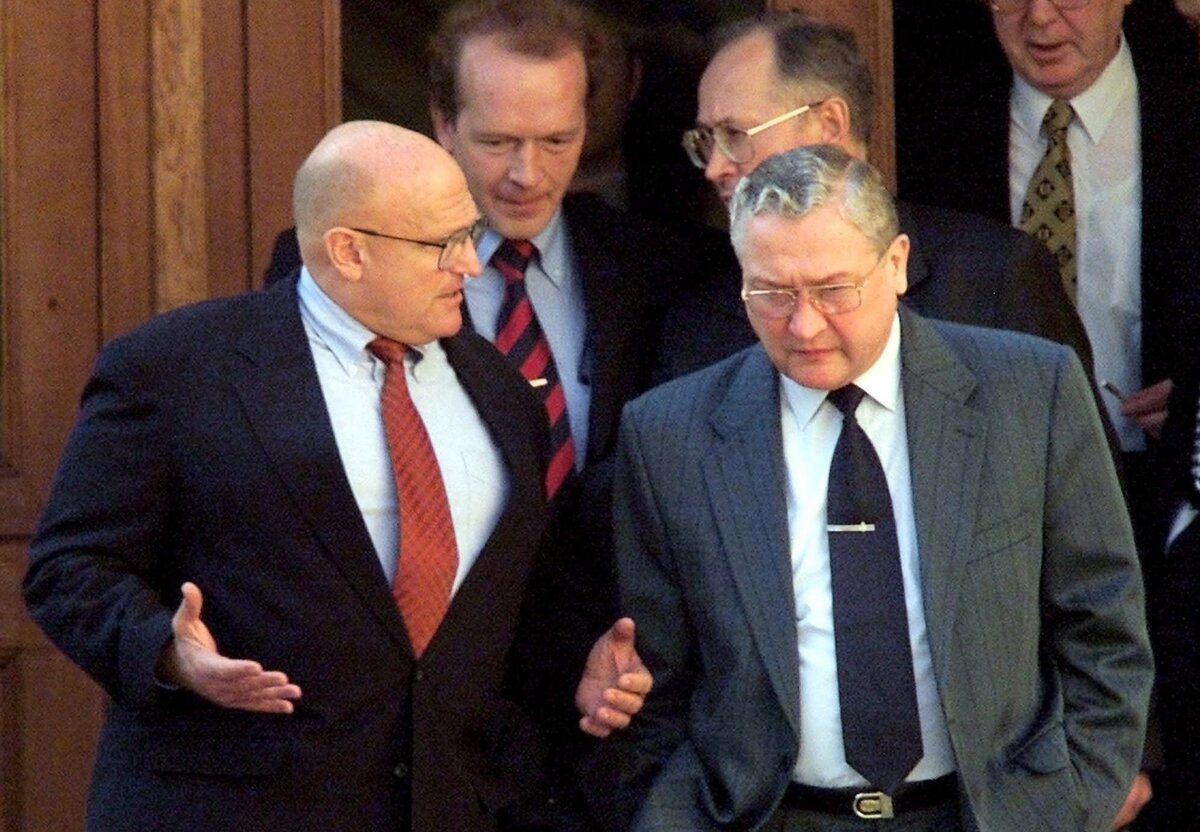 Vyacheslav Trubnikov (right) was head of the Foreign Intelligence Service, Russia's equivalent of the CIA, from 1996 to 2000. He's shown here speaking with U.S. Deputy Secretary of State Richard Armitage in 2001 in Moscow. Trubnikov was Russia's deputy foreign minister at the time.

It's not every day that the man who ran Russia's foreign espionage service offers to buy you a drink.

I'd been chasing Vyacheslav Trubnikov for an interview, when a message landed in my inbox: Hotel Metropol, 5 o'clock.

He was born in Siberia and joined the Soviet KGB in 1967. He was immediately sent to Calcutta, India, under cover as a reporter. I asked him, did the other journalists know he was a spy?

"To be frank, everyone who was in Calcutta was considered to be a spy. Everyone. Every journalist," he said.

Getting The Top Job

Twenty-nine years after he became a spy, Trubnikov ascended to the top job. He ran Russia's answer to the CIA, the SVR, or Foreign Intelligence Service, from 1996 to 2000. The SVR succeeded the KGB after the Soviet Union broke apart in 1991.

For a man who has lived his life in the shadows, Trubnikov is surprisingly candid when asked, for example, about some of the U.S. officials he has worked with.

"Amazing personality. Marvelous personality. At 5 in the morning, he is already [working] with weights, you know? Very manly," he said. Trubnikov was speaking about Richard Armitage, former No. 2 at the State Department. Trubnikov likes him. He is less enamored with former CIA director George Tenet.

"I do remember Iraq. And he, unfortunately, he was instrumental in trying to prove the existence of WMD [weapons of mass destruction] in the hands of [Iraqi leader] Saddam Hussein," Trubnikov said. "It was absolutely incorrect. I tried to persuade him that this is nonsense. He did not believe me. Unfortunately."

"A huge machine. But, its usefulness from my point of view is not only limited but it's meager," he said. "A lot of info which is absolutely unnecessary and impossible to digest. A lot of money spent just for nothing."

Spy Vs. Spies: Why Deciphering Putin Is So Hard For U.S. Intelligence

So what should intelligence money be spent on? Trubnikov pauses and takes a nibble of a chocolate cookie.

"Today, to get any kind of secret paper, with the top-secret info — that's nothing," he said. "It is essential to penetrate into the brains of those who are leading the countries."

And to penetrate the brains of foreign leaders — to predict your adversary's next move — Trubnikov says only human intelligence works. Meaning, traditional espionage.

"An intelligence officer must grow up to the level of Michelangelo," he said.

What does Michelangelo have to do with a modern Russian spy? Trubnikov's answer: The best spy is a Renaissance man.

"He has to have in his brain an encyclopedia. He cannot today be a very narrow specialist. To get information, very, very delicate information. This is the task of an intelligence officer."

Trubnikov and I spoke for more than an hour, touching on matters from Edward Snowden, the former NSA contractor who leaked government secrets and fled to Russia, to the wonders of 3-D printing. It was only afterward, that the true strangeness of our conversation struck me.

Who would have imagined it, a generation ago: A Soviet spymaster talking tradecraft, with an American reporter not even born when he began stealing secrets for the KGB. And then the two of us shaking hands and going our separate ways, into the Moscow evening.