Accessibility links
In Australia, Decades Of Abuse Against Military Recruits Comes To Light : Parallels A commission is investigating complaints by military academy students who say systematic sexual abuse was inflicted on new recruits dating back to the 1970s. 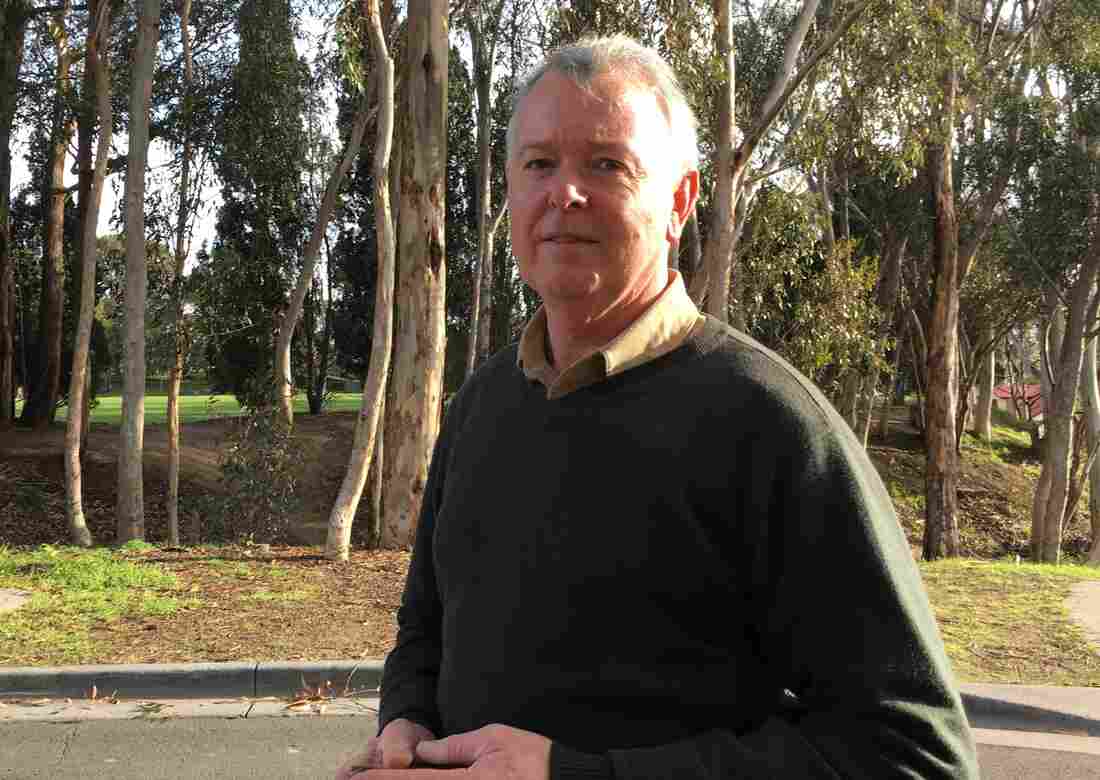 Daryl James was just 15-years-old when he arrived at the Army Apprentice School in the 1970s. He says he was repeatedly abused, as were many others. Now he returns every year just to confirm that the school is still gone. "The ghosts have gone now, " he told NPR. Louisa Lim for NPR hide caption 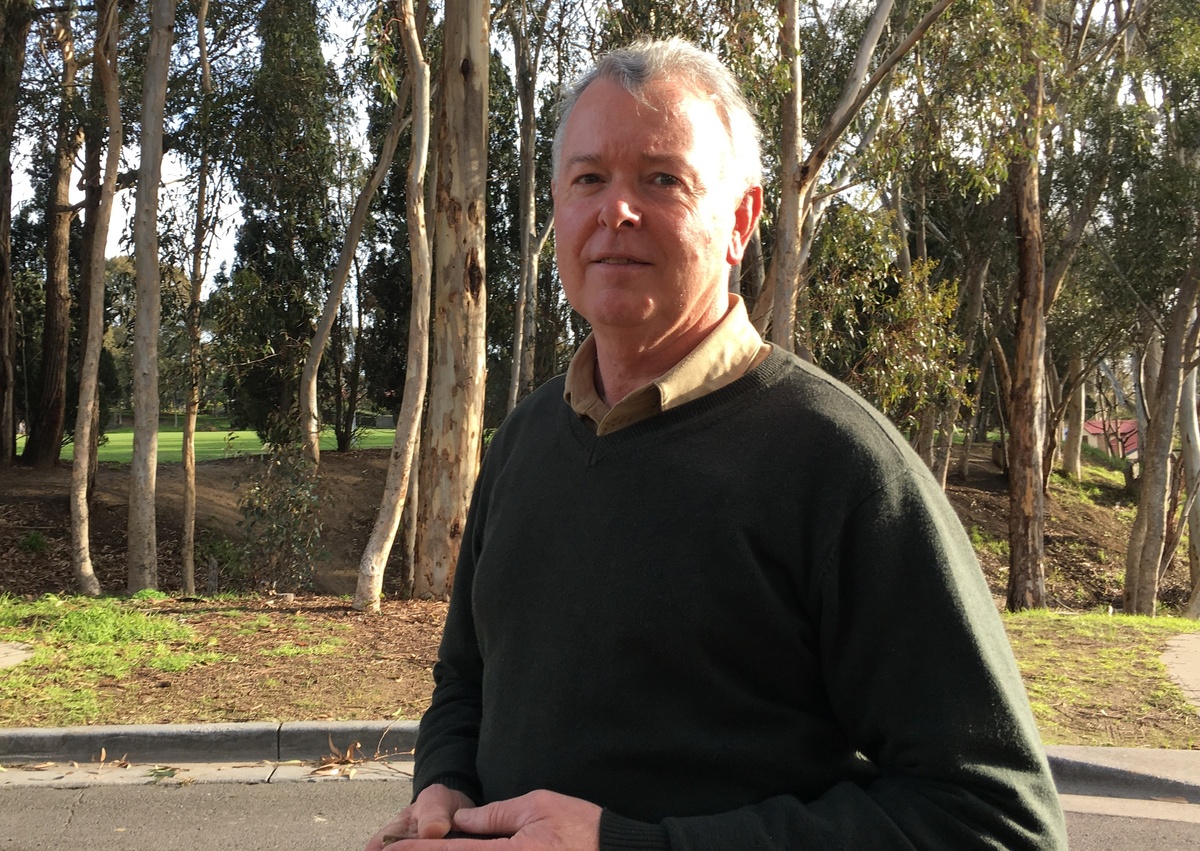 Daryl James was just 15-years-old when he arrived at the Army Apprentice School in the 1970s. He says he was repeatedly abused, as were many others. Now he returns every year just to confirm that the school is still gone. "The ghosts have gone now, " he told NPR.

Editor's Note: There are descriptions of rape and other forms of sexual abuse in this story.

All that remains is a pair of yellow gates, perched on the crest of a hill dotted with gum trees and cypresses, overlooking the blue sea. The natural beauty of the site stands in stark contrast to the central role it played at the heart of a sex abuse scandal dating back decades.

The scandal has roiled Australia's Defence Forces and caused one of the most senior figures in the armed forces to apologize in front of a Royal Commission investigating the abuses.

The Army Apprentice School, which once stood on this hill, was, along with a naval institution, HMAS Leeuwin, the site of horrific abuse of 15-year-old and 16-year-old recruits in the 1970s, while senior officers turned a blind eye.

Daryl James strides through the parking lot, which was once the parade ground of the Army Apprentice School in Balcombe, Victoria, in southeast Australia, pointing out landmarks.

He was 15 and an aspiring musician when he entered the school in 1972 as a junior apprentice, or a 'sprog' in army slang. The damage he and other classmates suffered was longlasting, he said.

"I've got friends that are still suffering in silence, that can't even bring themselves to drive down the highway without shivering and shaking," he said.

James gave evidence to the Royal Commission, describing how a corporal had told him on his first day, "You're the lowest of the low here. Nothing you ever do under my watch will ever be good enough. You're a marked man."

The physical abuse, James said, was "systemic, traditional and commonplace." Hazing rituals were so codified that punishments were named, for example "running the gauntlet," "crocodiles and alligators" and "the royal flush," and often accompanied with specific chants.

In his testimony, James described the night he was sodomized with the scabbard of a rifle bayonet.

"I feared for my life," he said, as he described the treatment meted out by his tormentors. "As they left, they warned me that a noisy sprog is a dead sprog, then they forcefully flipped the bed sideways and I fell onto the floor with the bed falling onto me. I reckon I was in shock but then I felt agonizing pain and blood in my groin."

He was raped repeatedly during his time at Balcombe. When asked about the impact, he has just three words, "I was killed."

He needed corrective surgery for his injuries. He has been diagnosed as suffering from depression, anxiety, PTSD, alcohol dependence and has tried to commit suicide.

The commission heard appalling scenes of abuse and degradation, which senior officers largely ignored. One witness described being stripped by older recruits who smeared Vegemite on his genitals, then brought in a dog to lick it off.

Another witness who joined the navy at HMAS Leeuwin described how he was dragged to a sports oval in the middle of the night on multiple occasions, where he was forced to rape other recruits.

David Sparreboom described how, after being sodomized with a broomstick, he had told a senior officer that people were "getting broomsticks up the bum."

The officer's response, he said, was along the lines of, "You are all young fellers and pranks will happen."

"Those people need to be brought to account for what they have done," Sparreboom told the Royal Commission, his voice cracking.

The survivors have complained of being treated with disdain by the Defence Forces, who have often used bureaucracy to outmaneuver them.

Some victims were denied compensation due to a lack of evidence, and the historical nature of their claims. The eight-day hearing examined evidence of abuse from the 1960s to 2013 heard from victims who said their careers – and those of their supporters – often stalled after abuse complaints.

This hearing is just one case study in a four-year-long Royal Commission investigation of child sexual abuse in educational institutions, orphanages, religious organizations and sporting bodies.

"There has not been a similar inquiry anywhere in the world," says Angela Sdrinis, a lawyer who represents some of the survivors. "The commissioners themselves will say they see part of their role as bearing witness. For the victims, the truth is so important. It's listening to their stories, it's publishing their stories and it's making the institutions accountable."

To Sdrinis, the army's unspoken code of conduct is part of the problem.

"You don't dob [inform] on your mates, you're not a whinger," she said. "All of that macho sort of crap that you see in the military which has allowed child sexual abuse to occur. It's all about that stuff."

Two separate inquiries have already been held into abuse in the Defence Forces, one of which is investigating 2,400 complaints.

At the Royal Commission, Vice Admiral Ray Griggs apologized unreservedly to all those who had suffered, thanking for them for their courage to tell their "tragic and transformational" stories.

"I am deeply sorry for what happened to you," he said. "No one who pulls on the uniform of this country and no child who is under our care should ever have had happen to them what has happened to you."

However, he acknowledged the difficulties in making changes.

"We are trying to move away from a culture that excludes and allowed what has happened in the past, and to a culture that includes," he said. "Strangely, the senior leadership has been very publicly criticized for this approach."

Back at Balcombe, Daryl James forces himself to keep returning to the site at least once a year to reassure himself that the school no longer exists.