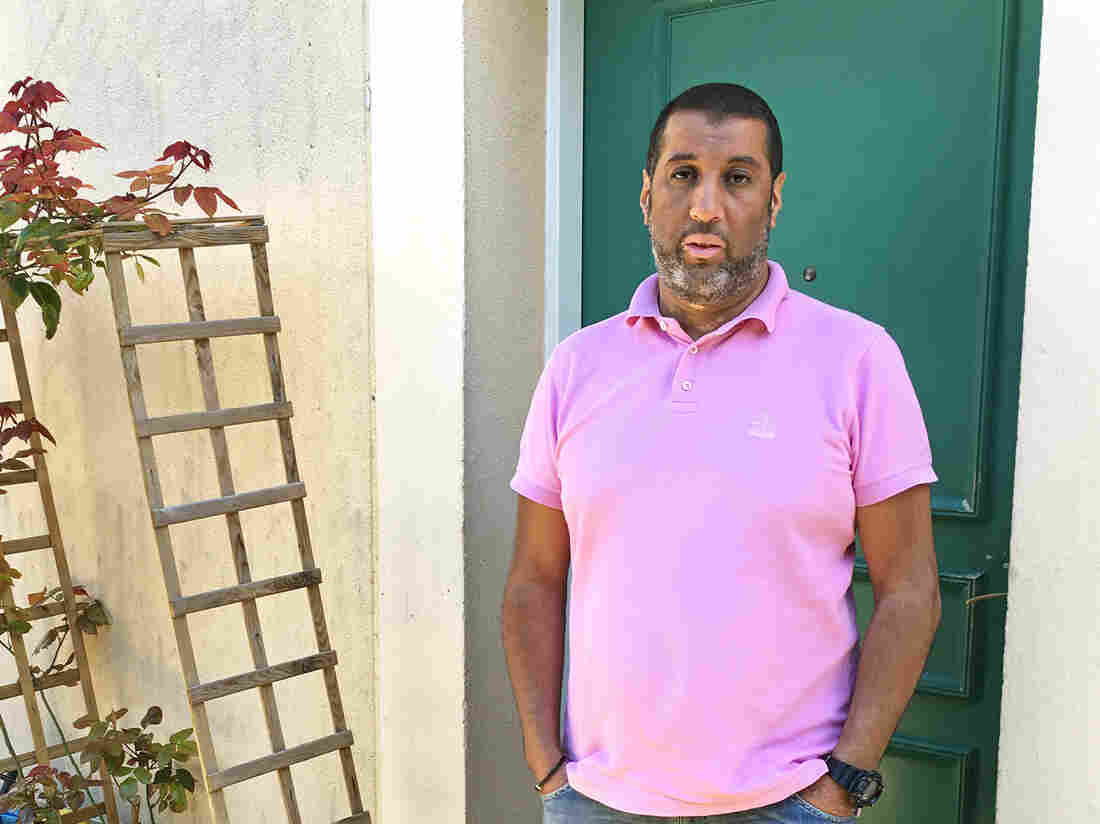 Mistafa Fanouni was the target of one of the more than 3,500 house raids that French police have carried out across the country since last November. After the raid, Fanouni was placed under house arrest until a court ruled in his favor to lift the arrest in February. Eleanor Beardsley/NPR hide caption 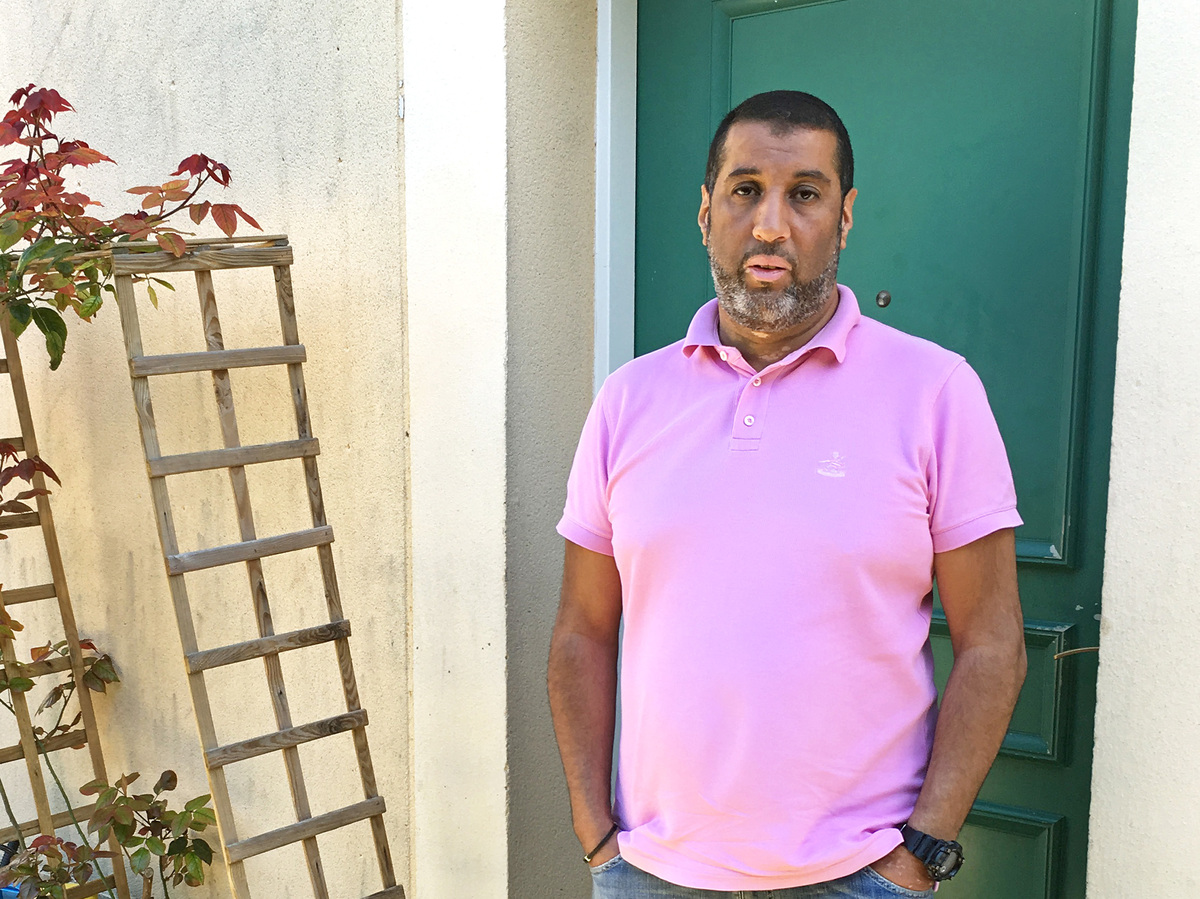 Mistafa Fanouni was the target of one of the more than 3,500 house raids that French police have carried out across the country since last November. After the raid, Fanouni was placed under house arrest until a court ruled in his favor to lift the arrest in February.

Mistafa Fanouni, 45, lives with his wife and three daughters in the peaceful community of Champagne-sur-Oise, about an hour's drive north of Paris. But amid the neat houses and manicured lawns, Fanouni has been living a nightmare.

It all began last November, two days after coordinated terrorist attacks in Paris that killed 130 people. Fanouni and his family had just returned from lighting candles at a memorial in the capital's Place de la Republique.

"At about half past midnight, I was in my room watching TV," he says. "My daughters were sleeping upstairs and my wife screamed, 'Somebody's trying to come in by force!' I opened the door to helmets and guns in my face. I was handcuffed in my underwear. They blocked my wife in the kitchen."

Fanouni says police then went upstairs and began to go through his daughters' rooms and computers. One officer climbed onto the top bunk and shined a flashlight in the face of his 12-year-old.

Fanouni was the target of one of the more than 3,500 house raids that French police have carried out across the country since last November. He was put under house arrest Nov. 16, three days after the Paris terrorist attack.

The country remains under a state of emergency after last year's terrorist attacks by home-grown Islamist radicals. France's Parliament gave police broad new powers of search and arrest. But the sweeping raids that ensued have raised concerns about civil liberties, especially in Muslim communities whose cooperation is essential to fighting terrorism.

Hundreds of citizens like Fanouni, most of them Muslim, have been put under house arrest since the state of emergency was imposed. Fanouni says he still has no idea why. He says authorities accused him of having radical Islamist views, of referring to his own daughters as soldiers.

This is all horribly wrong, Fanouni says. He was born in France to Moroccan parents, has lived here his whole life and feels completely French. 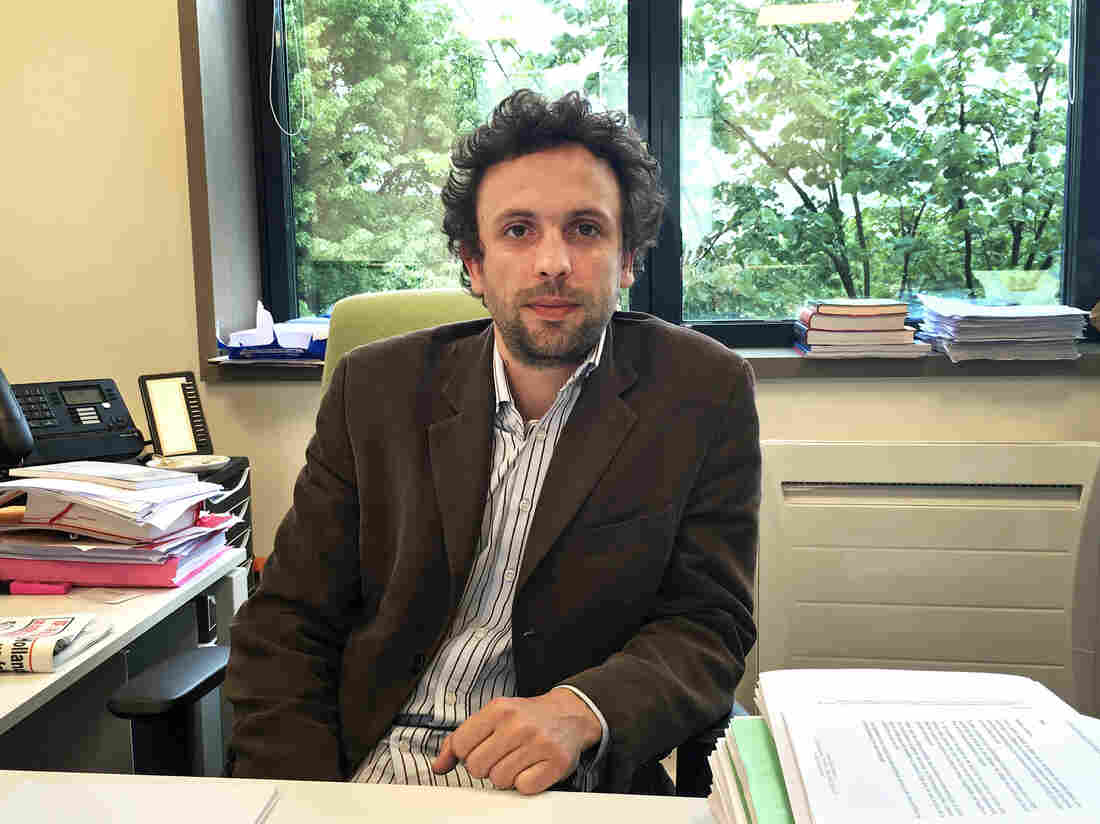 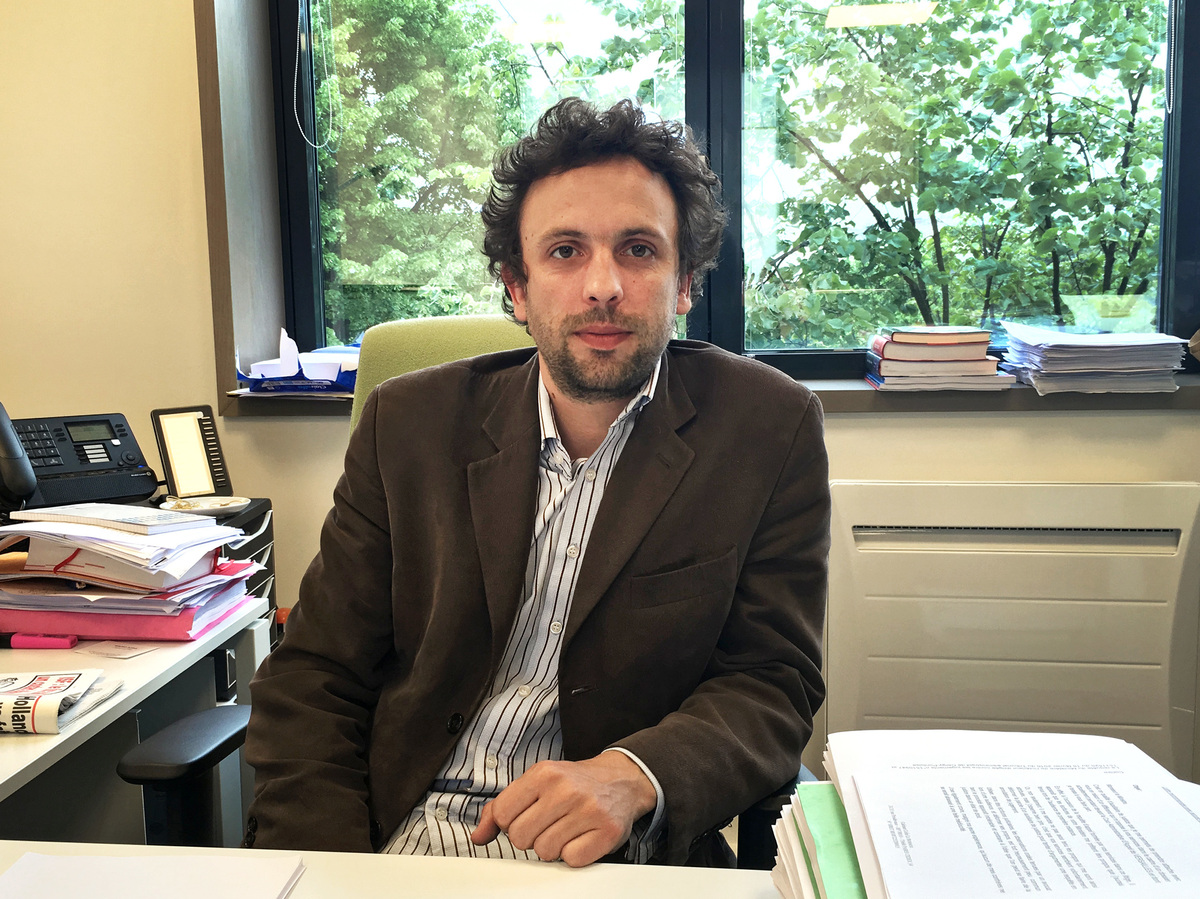 Fanouni says he has been humiliated in front of his neighbors, and his family is traumatized. His 5-year-old lives in fear that he'll be taken away.

Lawyer Colin Le Bonnois helped Fanouni bring a case appealing his house arrest to court in January. He says Fanouni was targeted based on what's known in intelligence jargon as a "white paper" — a single sheet containing anonymous, undated accusations.

In normal times, Le Bonnois says, such accusations would have to be investigated and a house search approved by a judge — but not when the country is in a state of emergency.

"My client was treated with unbelievable violence," he says. "I think that authorities are so fearful since the attacks that they feel they have to show they're acting. So they cast a wide net. And persecuting innocents is preferable to the risk of letting someone slide through the cracks."

A car accident 20 years ago left Fanouni disabled but with a large settlement, his lawyer says. He believes a neighbor — perhaps suspicious of the source of his income — could have reported Fanouni to the police. Add to that the fact that his client is Muslim and also happens to have a gun permit and belong to a shooting club, and unfounded suspicions could have been kindled.

In February, a court ruled in Fanouni's favor and lifted his house arrest. Life returned more or less to normal for him and his family.

But tensions in France have remained high. Last month, an avowed follower of ISIS stalked a French police officer and his domestic partner, also a police employee, and murdered them in their home in front of their 3-year-old child. President Francois Hollande said the couple's murder would push France to pursue its fight against terrorism with even greater determination. 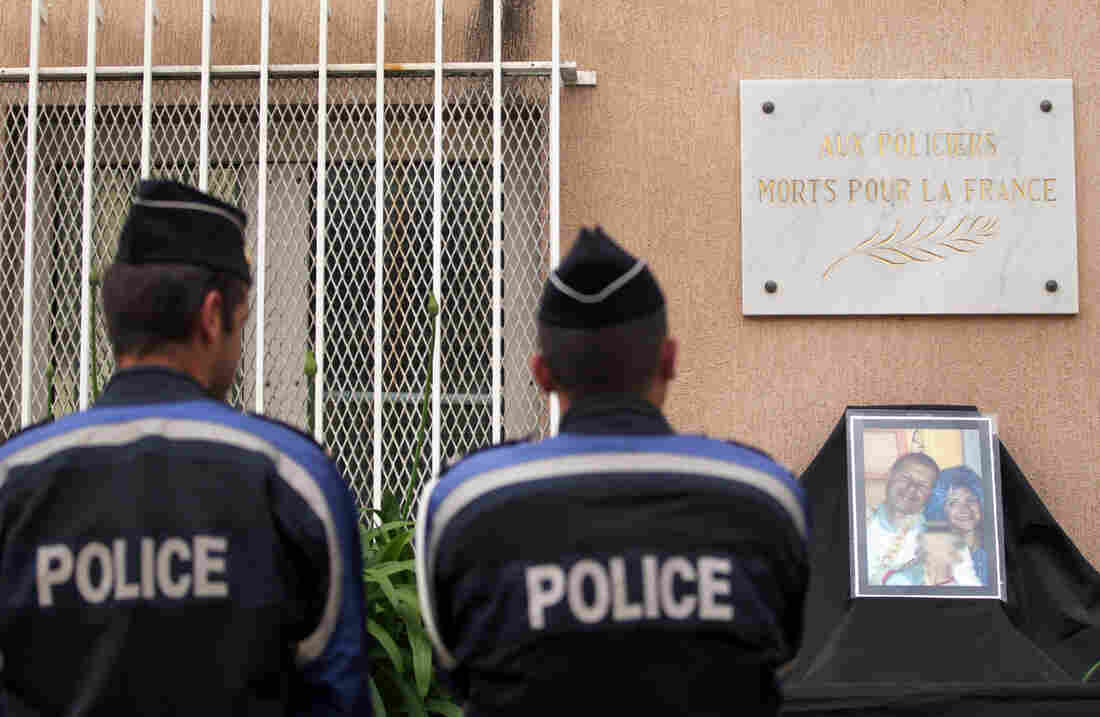 Police officers stand in front of a photo showing a French policeman and his partner, who were killed on June 13 by a man claiming allegiance to the Islamic State group. Pascal Pochard-Casabianca/AFP/Getty Images hide caption 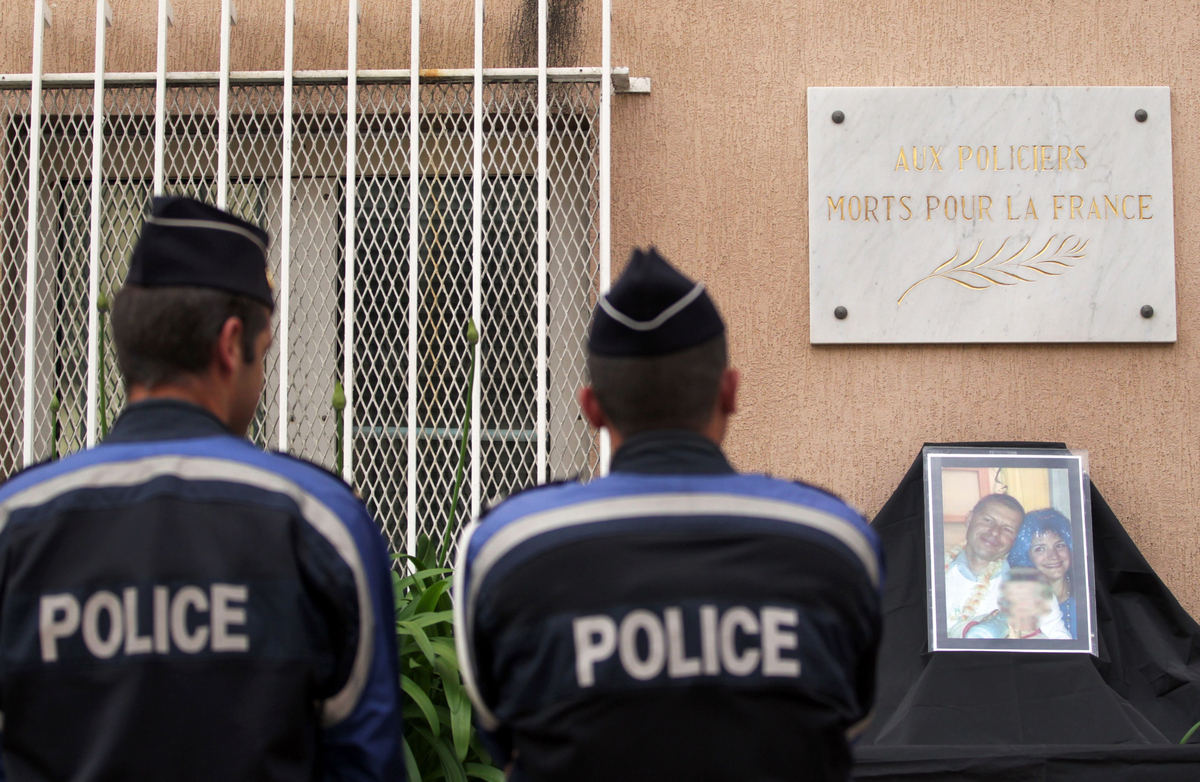 Police officers stand in front of a photo showing a French policeman and his partner, who were killed on June 13 by a man claiming allegiance to the Islamic State group.

Human rights groups accuse the French government of using its emergency measures to indiscriminately target Muslim citizens. The Interior Ministry denied NPR's requests for an interview, but Jacques Di Bona, the former head of police anti-terrorist operations, did go on the record.

Di Bona says the French public must be ready to sacrifice some liberties when the country is up against such a real and present danger. Nearly 150 people died in last year's attacks. The state of emergency allows police to move quickly, Di Bona says, and this can be important. But he cautions that it's important to target real suspects, and not just try to make quotas. That can be counterproductive.

According to a parliamentary report on the state of emergency, 3,500 house raids in the last six months have led to only six actual terrorism cases where legal proceedings have been initiated.

Those few suspects arrested for actual links to last year's terrorist attacks came to authorities' attention from inside tips received from the Muslim community, emphasizes Yasser Louati, a human rights activist who has worked with France's Collective Against Islamophobia. The community has done a good job of getting control over its mosques and preventing radicalization there, he says. But radicalization is taking place online and in prisons, so it's more important than ever for police to keep communication open and work with French Muslims.

The problem is "people are afraid to work with police!" he says. "The government has targeted specifically the Muslim population in its homes. Police cannot expect the community to work with it if they are themselves terrorizing the community."

At his home, Mistafa Fanouni shows me a dozen character references he produced in court — letters from neighbors, doctors, a police chief, a mayor. There's even a commendation from former President Jacques Chirac, praising Fanouni's work running an association that encouraged dialogue between troubled youths and police.

Fanouni shows me one more letter: a rejection he received after applying to work for the French intelligence services some 25 years ago. He found it after police ransacked his office last November.

"Instead of involving Muslims in the struggle against radicalization, they've cast them aside," says Fanouni. "And then they tell the public not to confuse radicals with law-abiding Muslims. But they themselves are doing so, arresting people who have nothing to do with terrorism."

As for his own case: Last month, the government appealed the February court ruling to release him. The government won. Now he's back under house arrest. He plans to appeal.