Accessibility links
After Brexit, Another European Referendum Looms: Italy's Constitutional Reforms : Parallels Italy's October referendum is on constitutional reforms. Many analysts worry it could boomerang on the prime minister and Italy could be the weak link in the EU family, the next domino to fall.

After Brexit, Another European Referendum Looms

After Brexit, Another European Referendum Looms 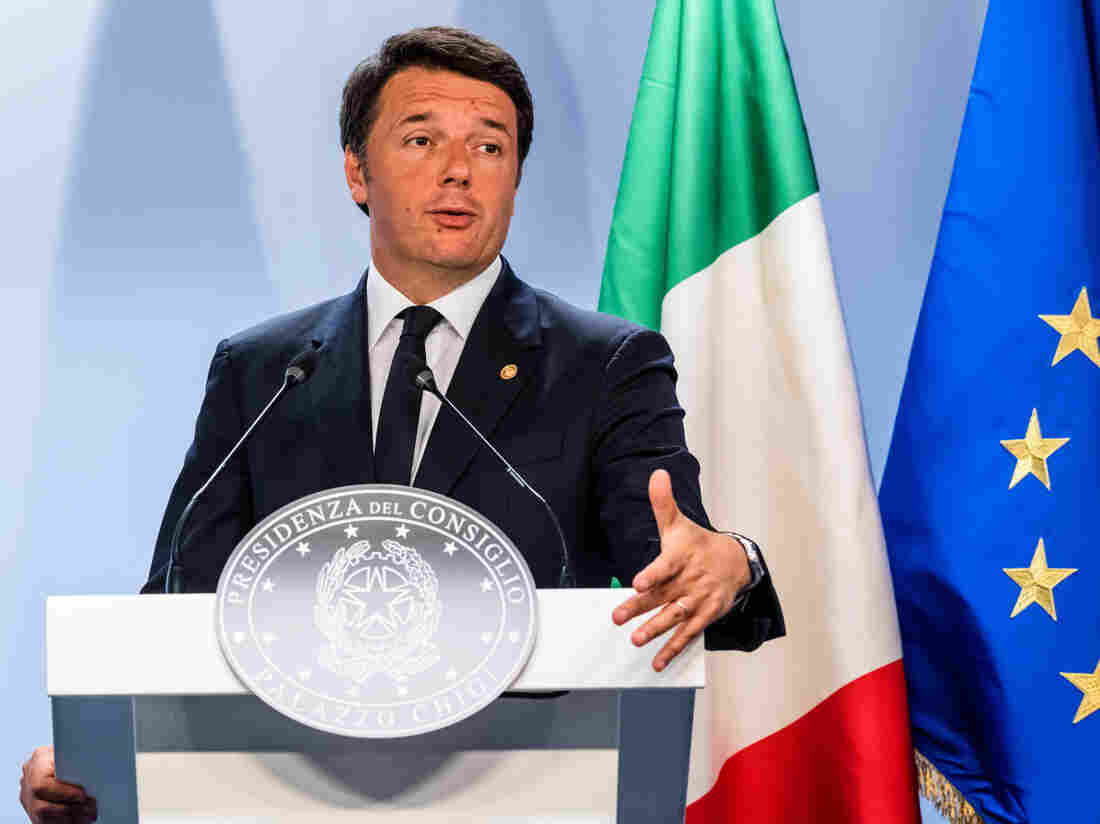 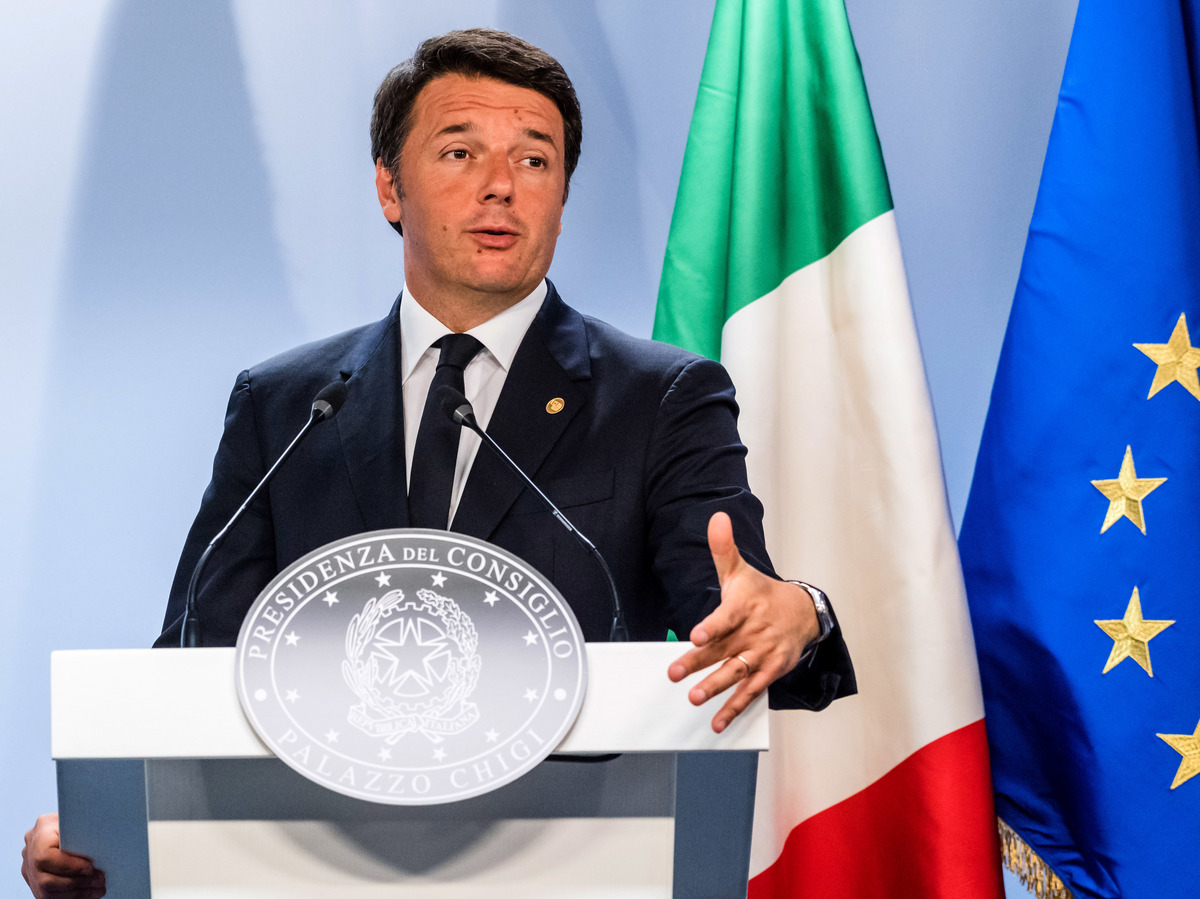 As Europe reels from the effects of the United Kingdom's Brexit vote, there's fresh anxiety about another referendum coming up in a major EU country.

It won't be a vote on whether to remain or to leave the European Union, but on Italy's constitutional reform package. Italian Prime Minister Matteo Renzi says the reforms — which would simplify and accelerate the passage of laws — are long overdue and will finally bring an end to decades of his country's notorious revolving-door governments.

But Italian analysts say the October vote could turn into a referendum on the Italian government itself — and could prove as much of a boomerang for Renzi, who has been prime minister for 2 1/2 years, as the U.K. referendum has been for David Cameron.

Complicating matters further are Italy's banking problems. Italy's banks are burdened by $400 billion in bad loans, one-third the eurozone total. These problems predate the arrival of Renzi's center-left government, but they have become a politically explosive issue after thousands of small depositors were wiped out at four regional banks over the last year and several savers who lost all their money committed suicide.

Many analysts warn that with its shaky banking system, lackluster growth, high unemployment and a growing wave of anti-establishment public sentiment, Italy is on the brink of a major crisis. The trigger could be Renzi's constitutional reforms referendum. 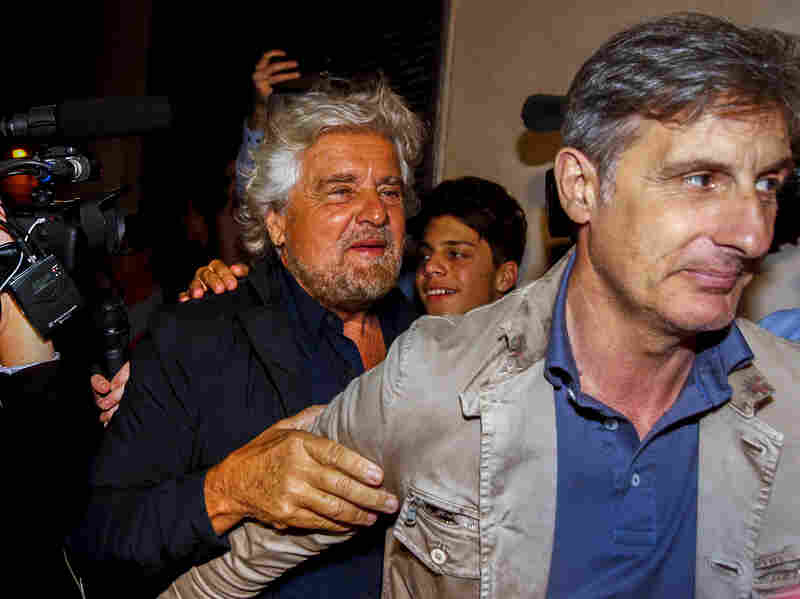 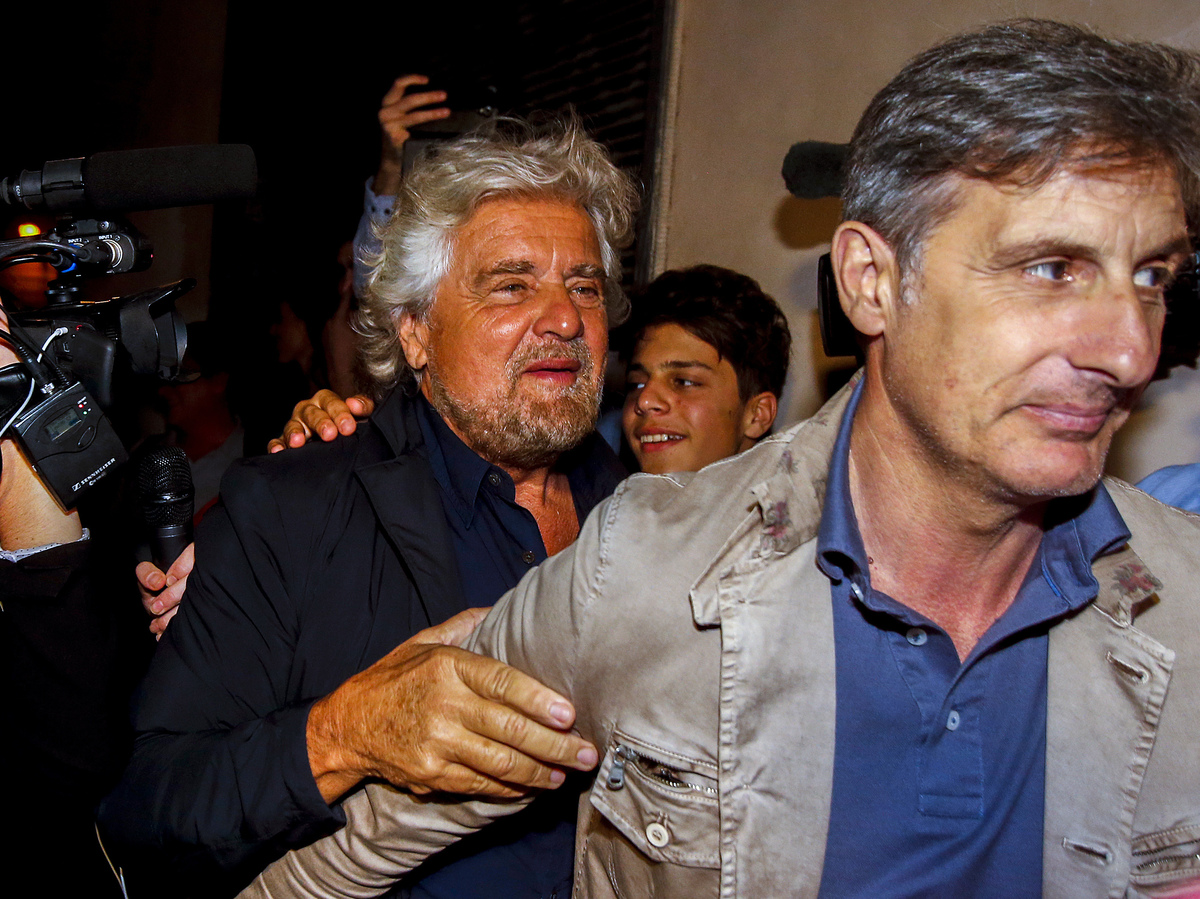 Beppe Grillo (left) arrives at a party in Rome on June 27 after his anti-establishment 5 Star Movement triumphed in Italian mayoral runoff elections in 19 cities.

Current opinion polls show a small lead for a "yes" vote approving the reforms, but polls have shown themselves to be unreliable in several recent European ballots. Renzi has repeatedly said that if the referendum fails, he will step down, raising the prospect of early elections in 2017.

The destabilizing potential of such an outcome causes deep anxiety in European capitals, because the party likely to benefit most from early elections is the anti-establishment 5 Star Movement.

Founded seven years ago, it sprang from a satirical blog started by comedian Beppe Grillo. The party won 19 out of 20 cities — including Turin and Rome — in local elections held on June 20.

Analysts attributed the 5 Star Movement's success to a wave of popular anger with entrenched political elites and insecurity over economic stagnation and the growing presence of migrants. Unlike the overtly right-wing, xenophobic parties gaining ground in other parts of Europe, the 5 Star Movement won votes in these local elections across the political spectrum, appealing to voters on the right, center and left.

In the European Parliament, however, the 5 Star Movement is allied with the right — including the U.K. Independence Party, one of the major Brexit sponsors.

Grillo, 67, described the Brexit vote as "a lesson in democracy," and last Tuesday, the two parties voted alongside Marine Le Pen's National Front from France, and other right-wing groupings, against a motion calling on Britain to speed up its EU departure.

Grillo has repeatedly criticized what he sees as excessive restrictions imposed on eurozone member states and has vowed to push for an Italian referendum on whether to remain in the eurozone. Should that ever come to pass and a "no" vote win — returning Italy to the lira as its currency — German economist Wolfgang Munchau, writing in the Financial Times, predicts a devastating outcome: "An Italian exit from the single currency would trigger the total collapse of the Eurozone within a very short period."

He also warns: "It would probably lead to the most violent economic shock in history, dwarfing the Lehman Brothers bankruptcy in 2008 and the 1929 Wall Street crash."

To prevent this worst-case scenario, Munchau writes, EU leaders should finally tackle the underlying causes of the bloc's numerous crises and radically transform the EU, including a blueprint for more — not less — political union of the eurozone countries and more equitable burden-sharing among the entire bloc. But many Europeans are wondering whether EU officials in Brussels have really heard the Brexit wake-up call.