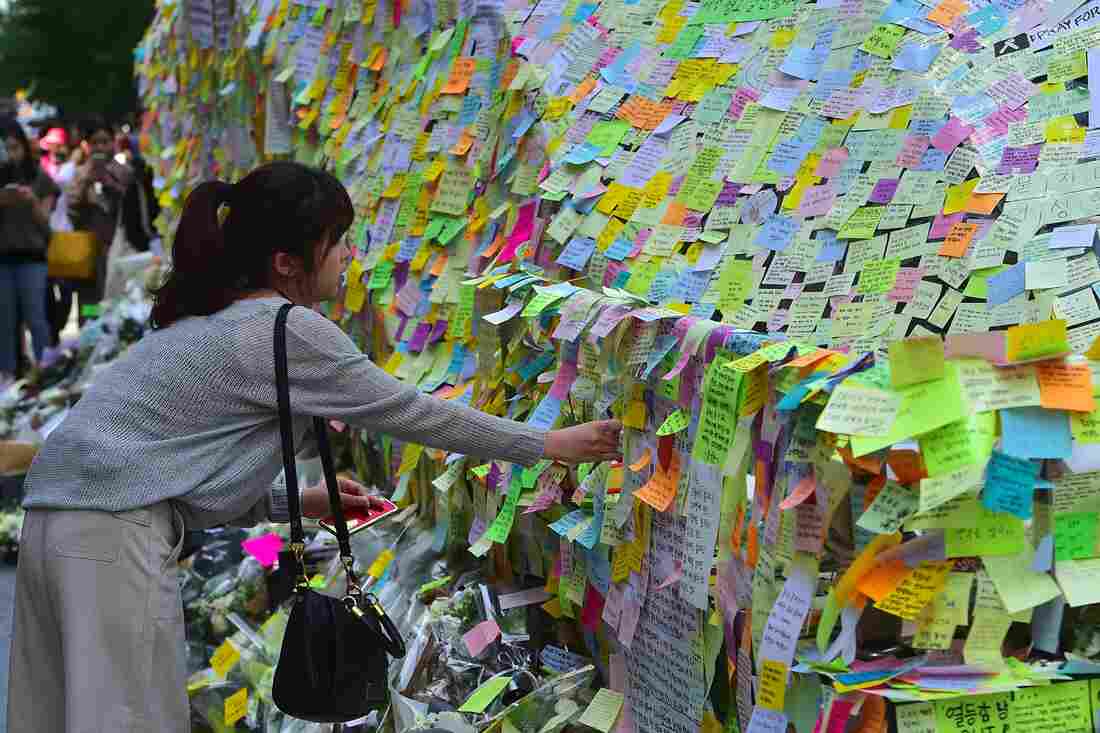 South Koreans leave notes at an exit of Gangnam subway station in Seoul. It was turned into a makeshift memorial for a 23-year-old woman who was stabbed to death by a male stranger. Jung Yeon-je/AFP/Getty Images hide caption 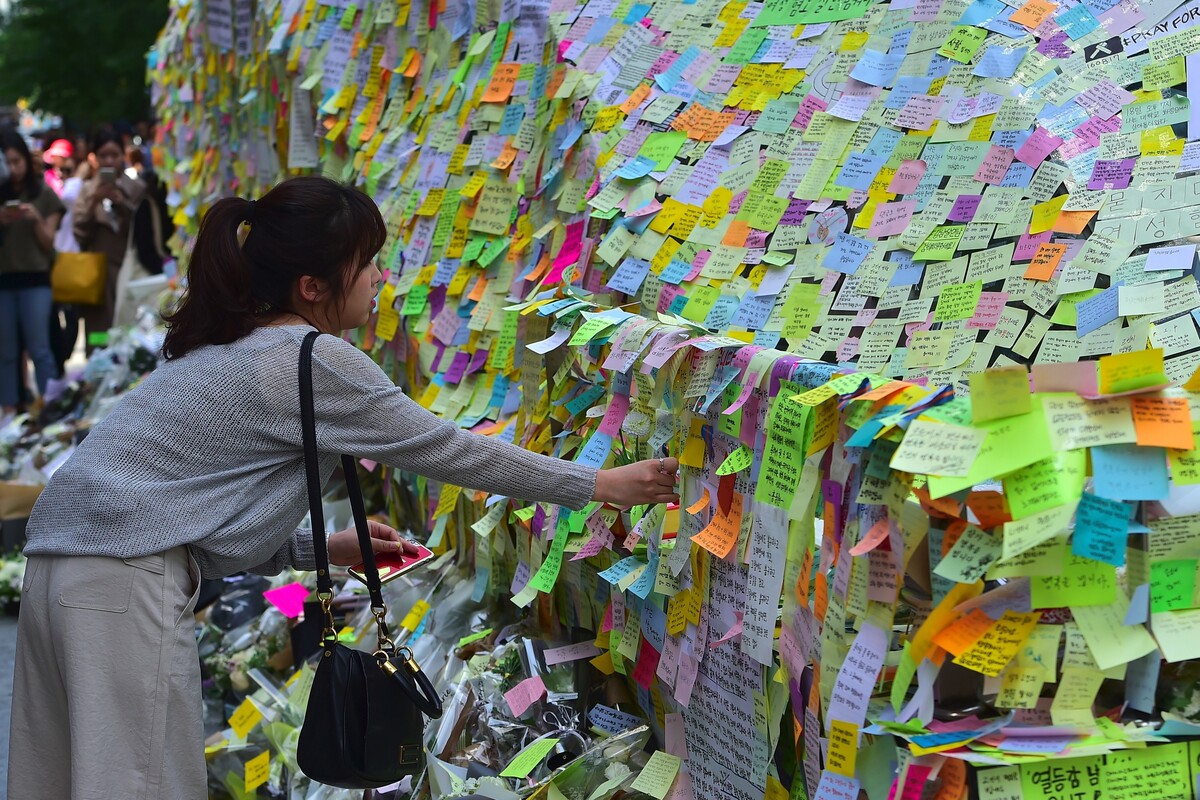 South Koreans leave notes at an exit of Gangnam subway station in Seoul. It was turned into a makeshift memorial for a 23-year-old woman who was stabbed to death by a male stranger.

The stabbing death of a young woman in a Seoul subway station and the gang rape of a teacher have stirred intense public debate about the status of women in South Korea.

By most measures, South Korea is a modern country with one of the largest economies in the world. But it has catching up to do when it comes to gender equality, and the recent events have burst open long-festering issues surrounding societal attitudes about women.

In May, the Gangnam subway station in the Seoul district famous for its eponymous K-pop song earned notoriety for a grim reason: A male suspect stabbed to death a 23-year-old woman in a public restroom near the station.

The suspect's explanation? He "hated women for belittling him." The victim was a stranger. Security footage shows the man passed over six men who entered the bathroom before singling out his female victim.

"It was the sort of crime that, if you are a woman, any woman could have had this happen to them," said Kim Hyunsoo, a coordinator at Korea Women's Association United, which works for gender equality. "The issues of gender violence were brought to the forefront."

Indeed, the incident touched a nerve. Women from across the country posted messages at the station entrance near the scene of the crime, memorializing the victim. The most common sentiment: "I survived, only by coincidence."

A week after the murder, a young teacher on a remote island in South Korea was gang-raped by three men, two of whom were fathers of her students.

Prosecution is underway in both cases. But the back-to-back crimes highlighted a larger problem about how South Korean society regards women.

"It's not [that] gender-violence crime has suddenly erupted," Kim says. "It's a problem that's existed persistently in Korean society. It's a crime that's a result of discrimination and hatred against women."

The law here forbids discrimination on the basis of gender. But laws are easier to change than attitudes. The World Economic Forum ranks South Korea 115 out of 145 countries for gender equality. It has the worst wage gap among developed nations. From January to August last year, nearly 90 percent of the victims who reported violent crimes were women.

While South Korea's overall crime numbers are relatively low, women and men view the threat of crime quite differently. A national government survey two years ago asked about a variety of societal issues, including the "main cause" of South Koreans' anxiety, and there, the gender split shows. Twice as many women as men reported that their top concern was crime.

"We've changed the law to make it more equal for men and women. But the perceptions and the systems are very old habits. And they're hard to change," says Choi Changhaeng, a division director at the government's Gender Equality Ministry.

"There are voices increasingly concerned about hatred against women. So our measures encourage a culture of equality between genders," Choi says.

Following the Gangnam murder, the ministry announced a raft of measures, including widening the support network for sexual assault victims and establishing a protocol for civil society on how to respond to sex crimes. The city of Seoul pledged to double the number of security cameras in public places like the Han River, which bisects the capital. And the nation's top university installed a scream-detector in its female restrooms.

But some advocates, like Kim, say many of the prescriptions address symptoms of the problem, not the causes.

"It's not about increasing the number of CCTVs," Kim says. "It should be more about eliminating the perceptions and the structures that perpetuate gender discrimination and hatred."

That's perhaps easier said than done. The growing chorus of women speaking out against violence is being met by men's rights groups, both on- and offline. The leader of one men's group warned against reverse discrimination of men. Following the Gangnam murder, some men's rights groups even staged protests at the makeshift memorial to the victim.