Accessibility links
Venezuela's Economic Implosion Exacerbates Inequality : Parallels There are two Venezuelas. In one, mothers have no milk for their children. In the other, you can get milky cappuccinos. The country's severe economic problems have worsened inequality. 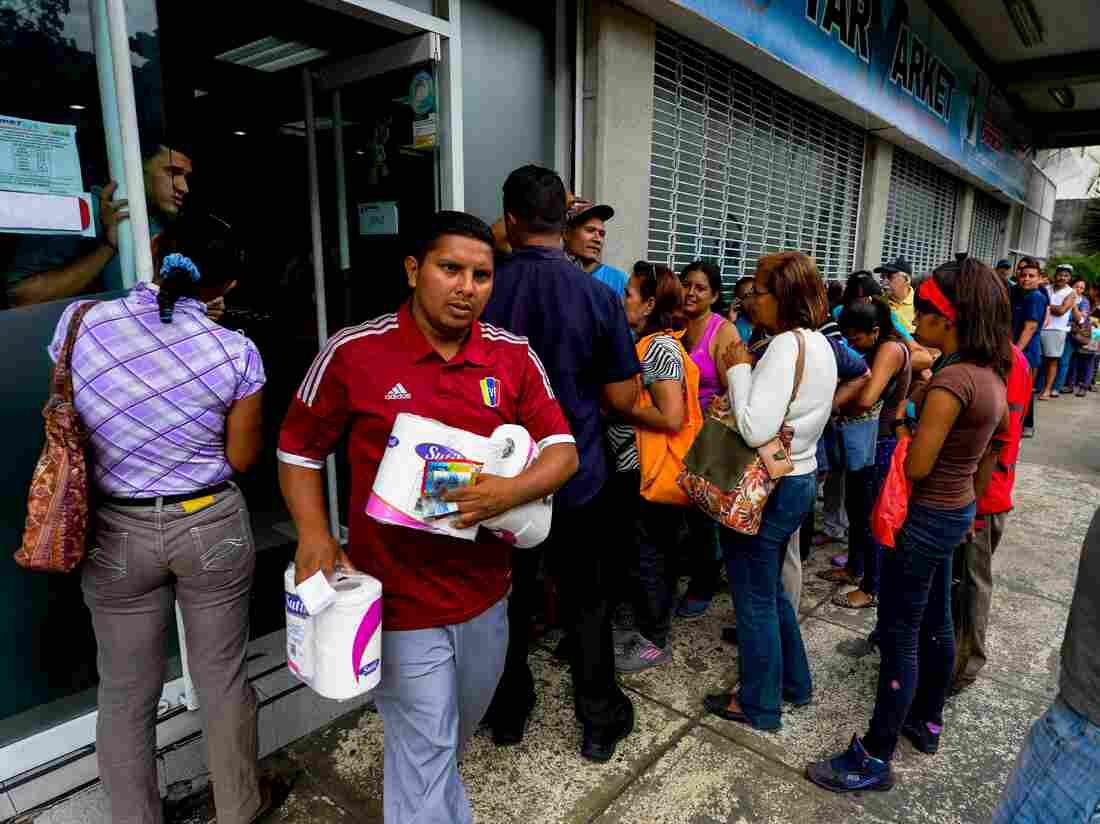 People line up to buy goods at a supermarket in Caracas, Venezuela, on June 13. Federico Parra/AFP/Getty Images hide caption 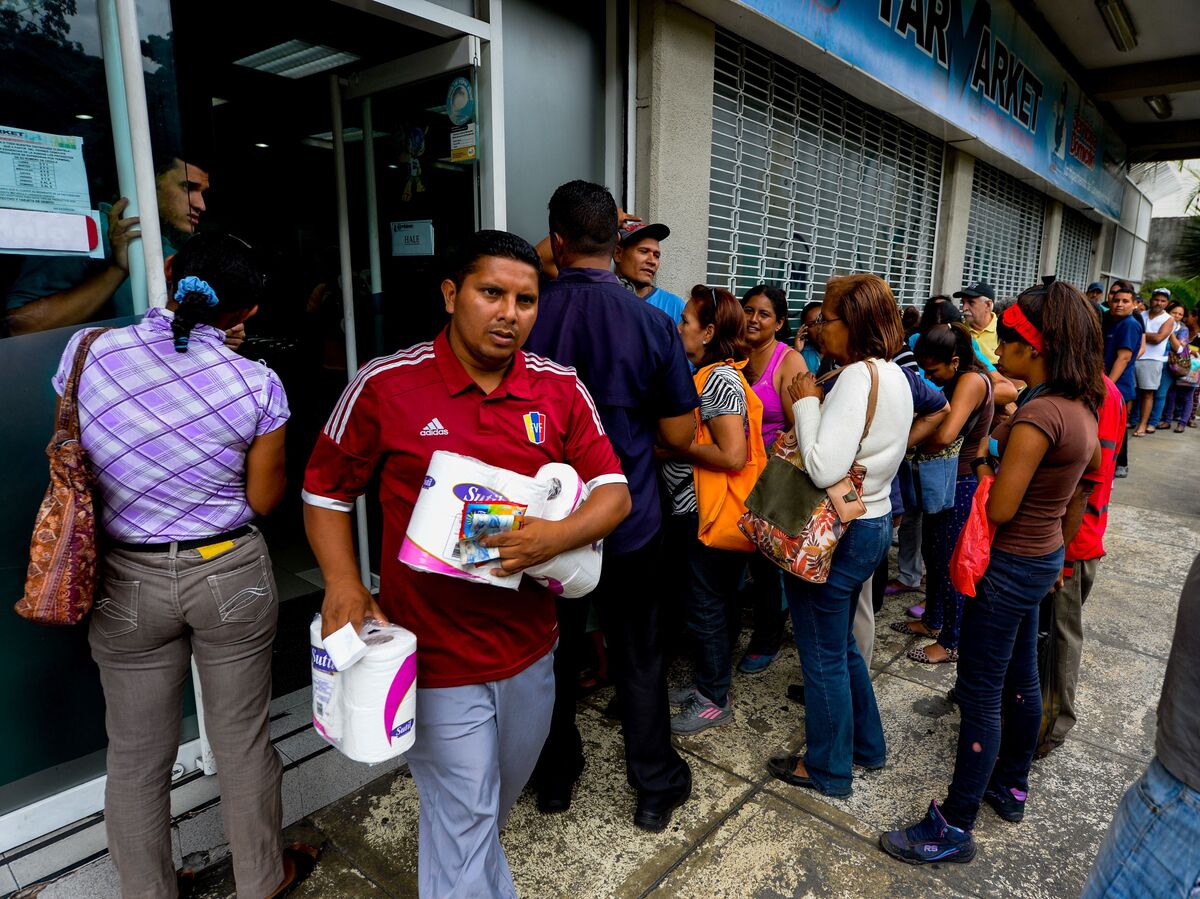 People line up to buy goods at a supermarket in Caracas, Venezuela, on June 13.

There are two Venezuelas.

In one, there are food riots and empty supermarket shelves and long lines of people waiting for basic goods. In the other, there are gourmet meals, creamy cappuccinos and rich desserts.

At the Santa Elena supermarket in the poor neighborhood or barrio of Antimano in Caracas, the capital, 72-year-old Nerys Ojeda is looking for detergent to wash her clothes. There isn't any.

"We can't find flour, spaghetti, sugar, butter. You can't find any of the things we really need," she says.

But go across town to the wealthy neighborhood of Las Mercedes, to a café called Franca, and there is a different reality. The menu has brioche and brownies and scrambled eggs.

While many poor Venezuelan women can't find milk for their kids, in this cafe, I'm getting a lovely foam on my cappuccino from a barista.

So what is going on?

Well, that depends on whom you listen to.

President Nicolas Maduro and the supporters of his socialist government say they are the victims of an economic war. Business elites are causing the problems, they say, by cutting supplies to pressure the government, which is facing the threat of a recall referendum. 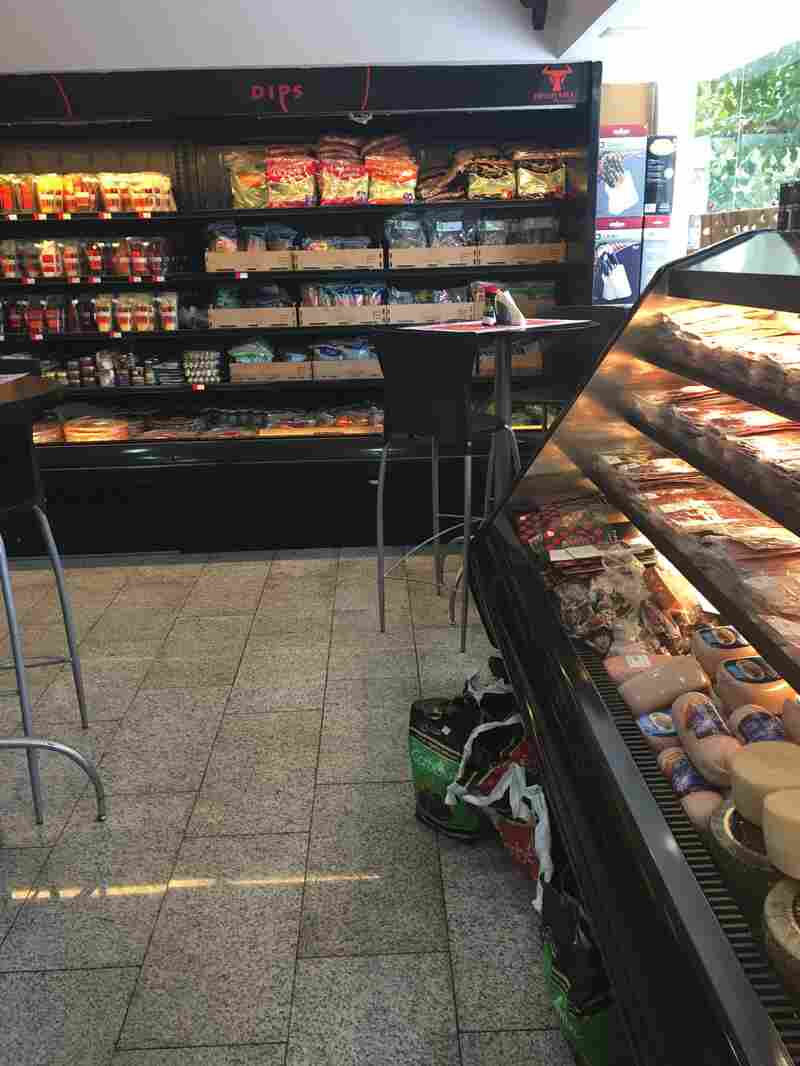 The Fresh Fish Market in Caracas caters to upscale shoppers who can afford the imported goods it carries. Lulu Garcia-Navarro/NPR hide caption

The political opposition, including lawmaker and economist Jose Guerra, says there is no economic war. There are only years of socialist mismanagement and failed policies benefiting political elites, who are taking advantage of a country that is drowning in oil.

At an upscale restaurant in an area called Las Mercedes, there are pasta dishes that cost anywhere from 4,000 to 9,000 bolivars. A worker earning the minimum wage in Venezuela would have to spend more than half his monthly salary to eat here.

But, says Tulane University sociologist David Smilde, an expert on Venezuela who joins me at the restaurant, if you have access to U.S. dollars, the cost of a meal would be $8 or $9 — "quite a deal for a gourmet pasta."

So those who are paid in petrodollars — opposition business people or political elites from the ruling socialist party — can afford to eat here.

"There are people for whom this is the best of times, because things are very cheap and people can go out to dinner every night," Smilde says. "The rest of the country has no chance of affording a place like this."

And the restaurants catering to the dollared class can afford the high black market rates to get the things they need, which is why they can offer pasta and milk for coffee. Ordinary people — most of whom live in poverty — don't have the money for scarce goods, which is why they wait in long lines for subsidized staples.

Which brings us back to those empty supermarket shelves.

I ask Smilde why so many things are scarce in Venezuela right now. He blames years of price controls, subsidies and artificial currency controls.

When oil prices were high, the government could afford to keep the cost of basic foodstuffs low. The problem is that most of what Venezuela consumes is produced and imported from abroad.

After oil prices crashed, Venezuela could no longer pay for everything it needed while servicing its billions in foreign debt.

"Imports this year have been reduced 40 percent from last year," says Smilde. "There's less than half the goods on the market now than in 2012. You can imagine how that impacts people's well-being."

The currency is also extremely distorted, with official and black market rates far apart. Meanwhile, inflation is rising. Estimates put it at 400 percent to upwards of 700 percent this year.

The result, Smilde says, is the worst crisis in Venezuela's modern history.