Accessibility links
Under The Philippines' New President Rodrigo Duterte, Dozens Of Drug Suspects Killed : Parallels Rodrigo Duterte promised during his campaign that he would get tough with drug dealers. He's been in office less than two weeks, and more than 60 suspects have been killed by police. 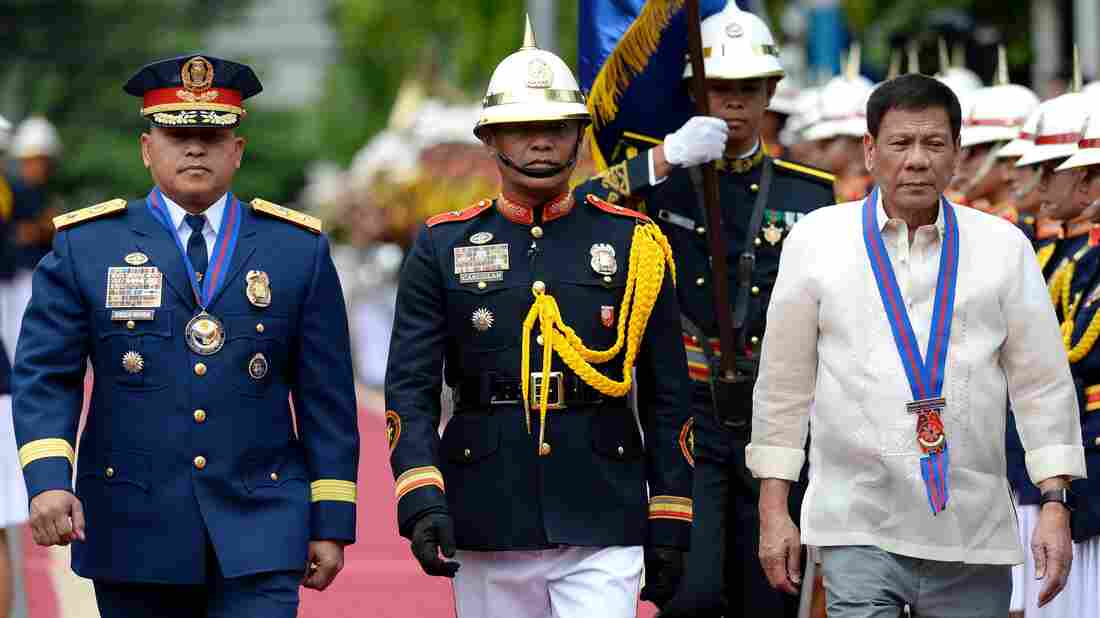 The new president of the Philippines, Rodrigo Duterte (right) walks beside the new police chief, Ronald Bato Dela Rosa, (left) as he was sworn in on July 1 in Manila. Duterte assumed the presidency on June 30, pledging a ruthless approach to suspected drug traffickers. Dozens have been killed by police in recent days. Noel Celis/AFP/Getty Images hide caption 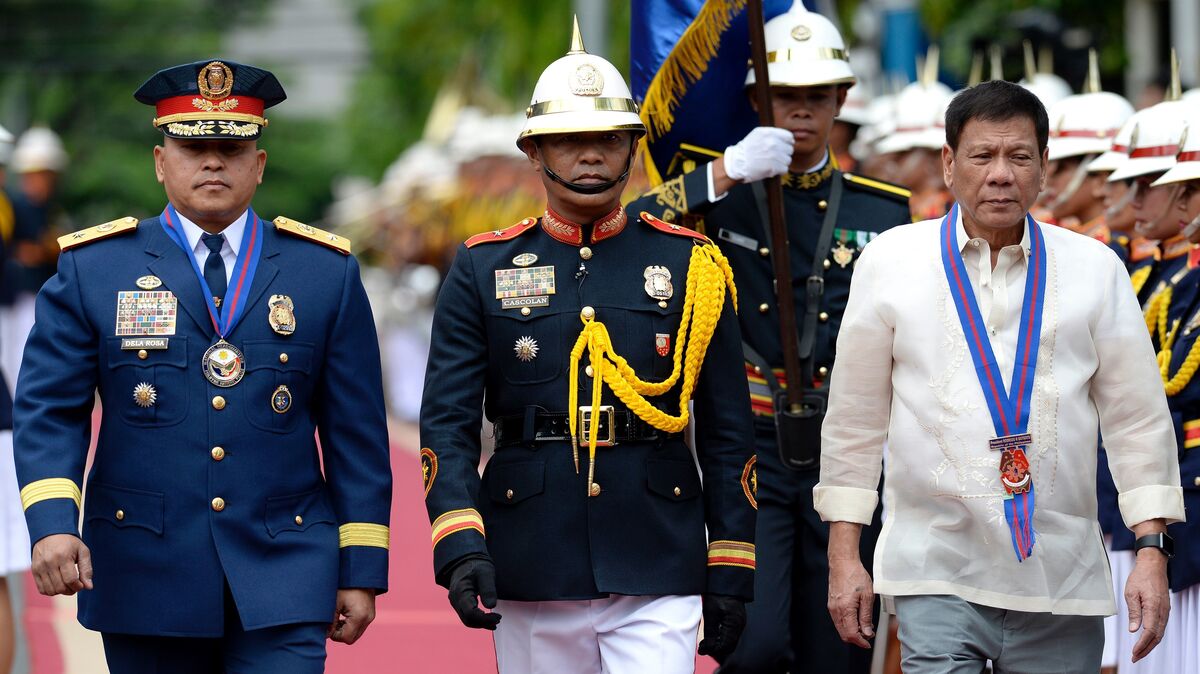 The new president of the Philippines, Rodrigo Duterte (right) walks beside the new police chief, Ronald Bato Dela Rosa, (left) as he was sworn in on July 1 in Manila. Duterte assumed the presidency on June 30, pledging a ruthless approach to suspected drug traffickers. Dozens have been killed by police in recent days.

They call him "The Punisher." And "Duterte Harry." And now, "Mr. President."

Rodrigo Duterte was sworn in as the Philippines' president just over a week ago after running on a simple platform of ridding the country of drug-related crime and corruption.

And since he took office, more than 60 alleged "drug suspects" have been killed in encounters with police, according to police. Others have simply turned up dead with signs pinned to their shirts proclaiming their guilt.

Duterte is a former prosecutor who wrapped up his presidential campaign by warning drug dealers he'd dump their bodies in Manila Bay. He's taking the same tone now that he's in office.

But he's also made it clear he will only protect cops who are clean. Duterte this past week named and shamed five police generals — two of them retired — for their alleged involvement in the narcotics trade.

'The Punisher' Poised To Be The Next Philippines President

On Friday, Duterte warned a major drug lord now out of the country not to return or he would be killed the minute he stepped off the plane.

"I think he's really serious. It's not just propaganda," said Earl Parreno, of the Institute for Political and Electoral Reform, who is writing a biography of Duterte. "A number of police officers have been known to protect drug lords. Not just police officers, but major government officials."

Duterte says it has to stop. Few doubt his sincerity or resolve. It's his methods that have brought opposition.

In more than 20 years as mayor of Davao City, Duterte launched a brutal war on crime — drug dealers in particular — that left hundreds of people dead in extrajudicial killings. Human rights groups say these killings were sanctioned, if not ordered, by the mayor.

During his presidential campaign, Duterte didn't run from these allegations, he embraced them. In one television interview, he said the number killed wasn't in the hundreds — but more than 1,700.

And his hard-line approach there, critics say, might help explain the killings of so many alleged drug suspects by police since Duterte became president less than two weeks ago.

"Every single death that's been reported they argue or claim is in self-defense, or that the persons who were killed fired first. We need to get to know what the facts are," said Chito Gascon, the head of the Philippines Human Rights Commission. He says he worries about the president's commitment to due process.

But Duterte clearly holds appeal in a country where many see a culture of impunity and feel the system is stacked against them.

"This sense of injustice is personalized. It's created this phenomenon that we now have where people want quick fixes," said Gascon. "It's a bit like we're back in the Roman Coliseum, when people collectively put their thumbs down and say, 'Finish him.' That's the mood that's emerging. It's really very dangerous."

But so far, voices like Gascon's appear to be in the minority.

In Tondo, a notorious slum near Manila Bay, the methamphetamine is a major problem.

It's a problem in every household, said Tondo resident Emily Reyes. She's 39 years old, and has lived here almost her entire life.

Reyes said she didn't vote for Duterte in the May election, but said she's become a supporter since then.

Things in her neighborhood have already gotten better, she said. Some dealers have already given themselves up, apparently because they fear they will be killed. And she's not worried about innocent people getting killed by mistake.

"Everyone knows who the drug dealers are," she said. "There won't be any mistaken identity."

In his inaugural address, Duterte acknowledged the critics at home and abroad who find his methods "unorthodox, verging on illegal." But as a lawyer and former prosecutor, he added, "I know what is legal and what is not. You mind your work, and I will mind mine."