Accessibility links
The Colombia-Venezuela Border: Open To Smugglers, Closed To The Desperate : Parallels Truckloads of smuggled goods get waved into Venezuela at the Colombian border. But the crossing is closed to ordinary Venezuelans hoping to enter Colombia to buy desperately needed food and medicine. 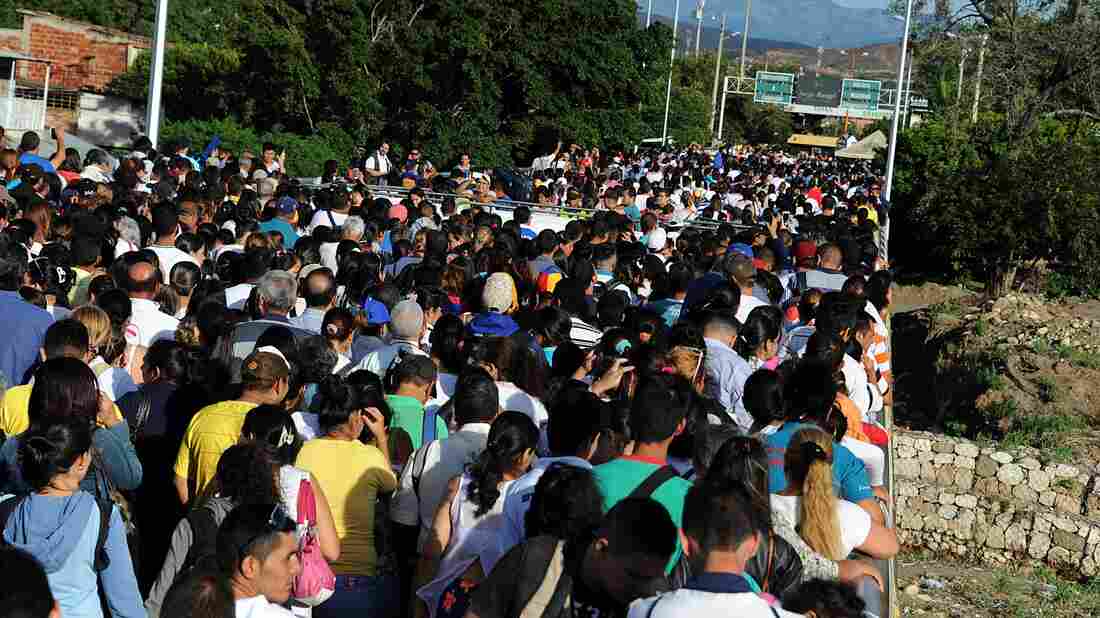 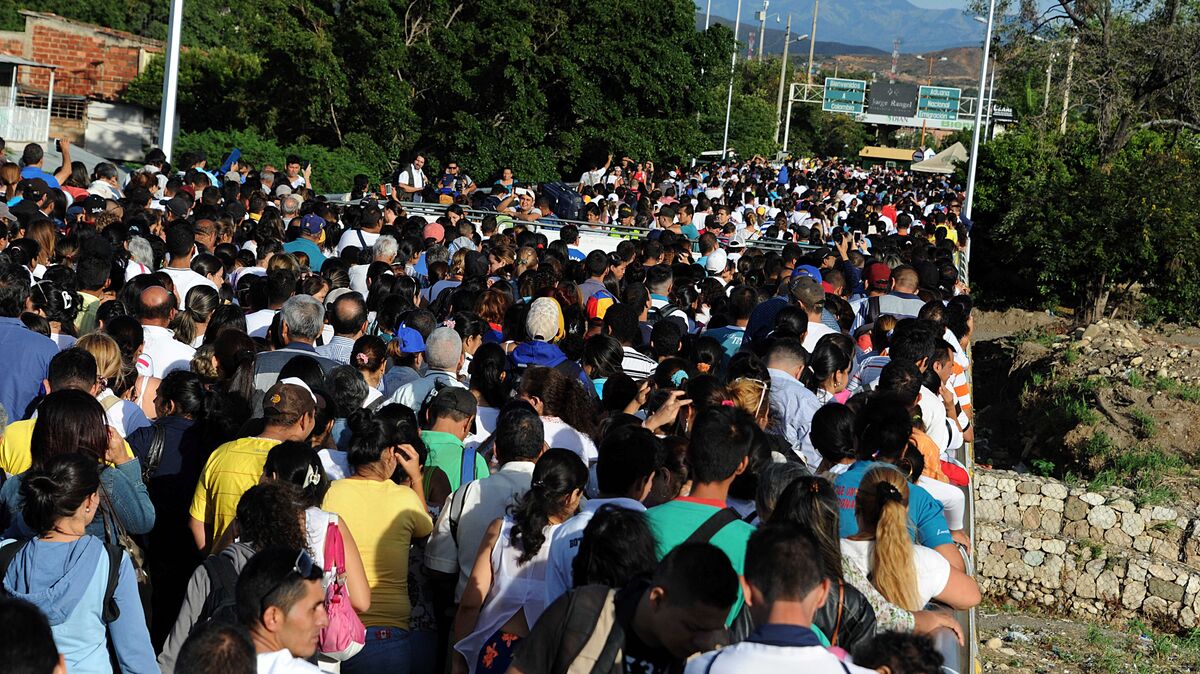 Venezuelans wait in San Antonio del Tachira, Venezuela, to cross the border with Colombia during a rare 12-hour opening Sunday. Thousands of Venezuelans crossed to buy food and medicine.

As we drive from the coastal Venezuelan city of Maracaibo toward Colombia, we see dozens of trucks, some of them escorted by Venezuelan National Guard soldiers.

They've come from Colombia — laden with illegal contraband — even though the border is officially closed.

Regular people or smugglers who don't have deals with the military have to brave what my driver calls la carretera sin ley, or the lawless road.

We stop at a crowded strip mall where a group of smugglers is sitting. One of them agrees to talk, but he also doesn't want his name used.

He tells me that the smuggling routes have been reversed: Before, Venezuela had lots of government-subsidized food that smugglers would truck into Colombia to resell at a profit. Which is why the government says it closed the border.

Now, with Venezuela's acute shortages, gangs bring in cornmeal, oil, flour and other goods from Colombia.

He says he isn't part of the big smuggling gangs, but rather ferries individuals into Colombia who want to see family or to shop. He takes the back roads — secret routes where contraband comes in and out.

"It's very dangerous to make the journey," he says. "There are many attacks."

He says the irony is that regular people — who could most benefit from being able to cross the border — are being stopped, while trucks of illicit goods are being transported with the complicity of Venezuelan authorities.

The "flea market" of Maracaibo is where a lot of those smuggled goods end up. It's a vast space of tin-roof stalls selling everything and anything — especially Colombian products.

The prices are sky-high: 1,300 bolivars — about $1.30 at current black market exchange rates — for a small packet of cornmeal, a staple used to make arepas, corn pockets that often are stuffed with cheese. That's unaffordable for most people, equal to about three days' work for someone earning the nation's minimum wage — $15 per month. And inflation is running, by some estimates, at 700 percent.

We meet Eveline, a mother of three who lives with her husband and eight other members of her family, at her home with her pet parrot cawing in the background. She also doesn't want her last name used, so that she can talk openly about the government

Running Out Of Food, Medicine And Patience In Venezuela

Women In Venezuela Struggle To Cope Amid Economic Misery

She tells me that she has to stand in line for hours to try to get her hands on the subsidized staples she can afford — and that the last time she stood in line, a few days ago, a group of women cut in front.

"They took out knives and guns and told us to get back," she said.

Eveline did, and by the time she was able to enter the supermarket there was almost nothing left to buy — no soap, no rice, no butter, no mayonnaise.

And that left her either buying smuggled food at inflated prices or going hungry, along with the rest of her family.

Except for sporadic openings, Eveline can't legally cross the border into Colombia and buy anything herself. Meanwhile, the smugglers and middlemen continue their trade in contraband.

"I didn't make breakfast or lunch and there won't be dinner either," she says. "Another day of hunger. That's the way we are living now."