Accessibility links
Taking The Long View, Is The World Getting More Or Less Violent? : Parallels The number of global killings has jumped by about 600 percent since 2010. But a former U.N. strategic planning director says it is crucial to put the numbers into proper context.

Taking The Long View, Is The World Getting More Or Less Violent?

Taking The Long View, Is The World Getting More Or Less Violent? 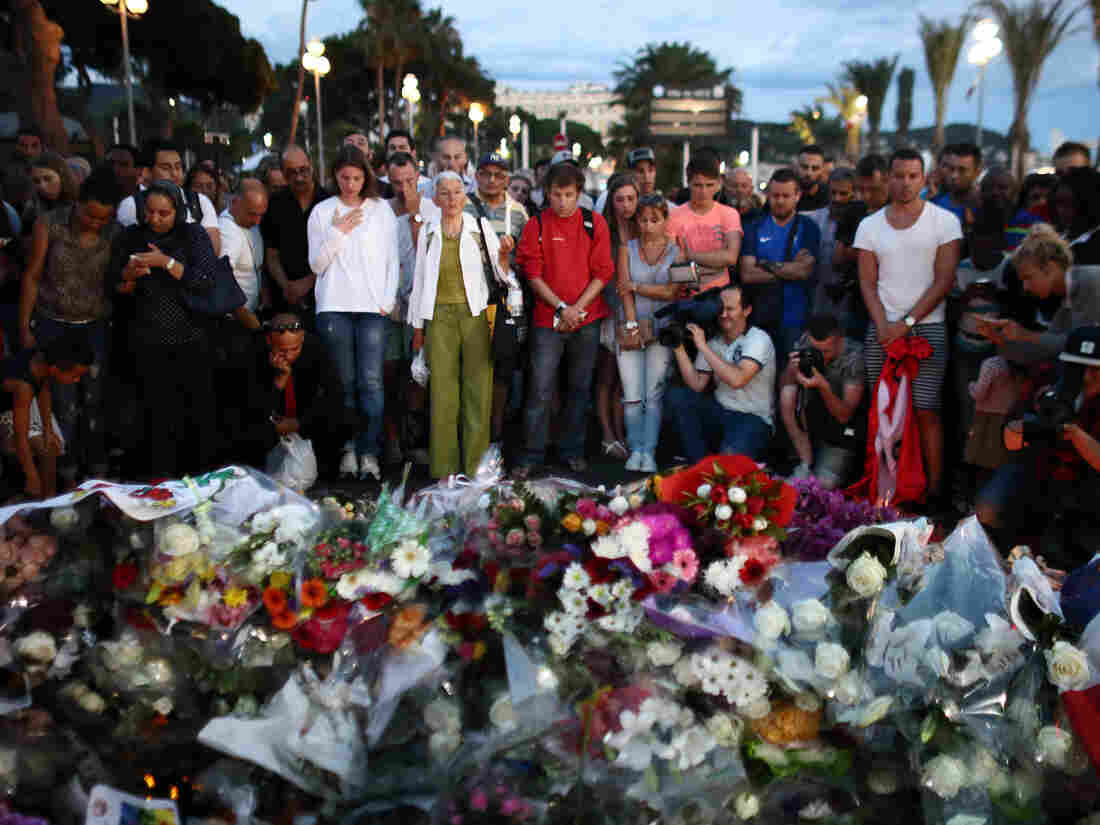 People gather and lay flowers on Nice's Promenade des Anglais on July 15. A French-Tunisian attacker left 84 people dead after driving a truck through crowds gathered to watch fireworks during Bastille Day celebrations. The attacker then opened fire on the crowd before being shot dead by police. Carl Court/Getty Images hide caption 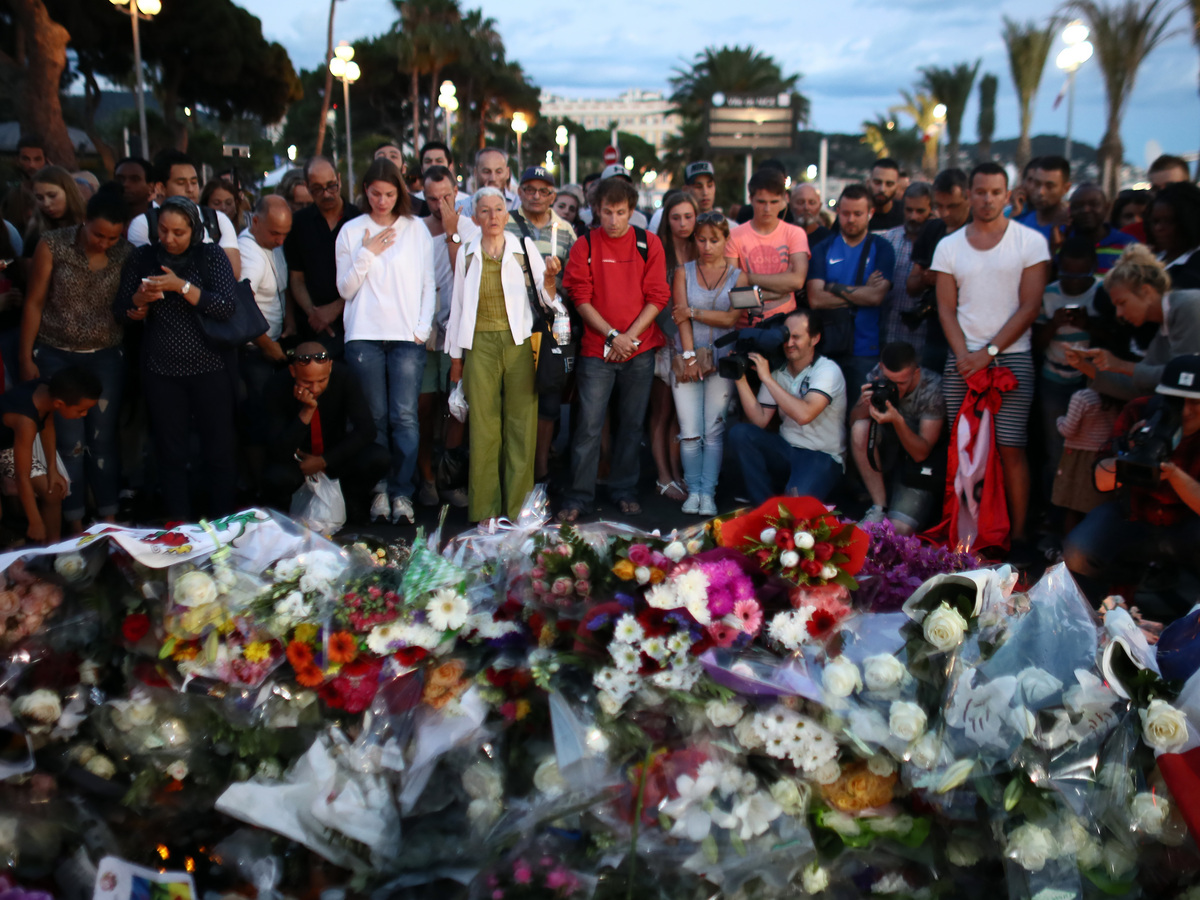 People gather and lay flowers on Nice's Promenade des Anglais on July 15. A French-Tunisian attacker left 84 people dead after driving a truck through crowds gathered to watch fireworks during Bastille Day celebrations. The attacker then opened fire on the crowd before being shot dead by police.

Andrew Mack, a former strategic planning director at the United Nations and now a fellow at the One Earth Future Foundation in Broomfield, Colo., coined the term "asymmetric conflict" back in 1975. His work analyzing trends in global violence for the Human Security Report Project helped inform Steven Pinker's thesis that the world is now a markedly less violent place than at any other time in history. Mack offered his thoughts in the aftermath of Thursday's terrorist attack in Nice, which left 84 dead:

So how worrying are things now?

It's incredibly difficult to say at the time, and can seem heartless, but it really is important to remember that the level of violence, and I'm talking about terrorism now, in Europe, is still incredibly small relative to other forms of killing — the most obvious one of which would be homicide. The homicide rate in Europe is about 1 per 100,000 persons, so Europe is much, much safer [than the United States]. And the level of terrorism would be very, very low relative to the number of homicides. If our concern is with violent deaths, terrorism kills dramatically fewer people [than] does murder.

You've been critical of the media's role in stoking fear and worry about terrorism and violence.

You know that old saw about the media, "If it bleeds, it leads." Well, what we know from our research in the 1990s is when the numbers of wars were going down, people didn't realize this was the case. If a conflict quietly peters out in the developing world, it doesn't get any coverage. If a war suddenly starts, it always gets coverage. And so people come away believing things are much worse than they actually are.

There's nothing you can do about sensationalist coverage [of terrorism and violence]. There is also a level of restraint [in coverage] that is really important. It is critical that when this material goes up, it's also the case that you have cool, calm and rational interpretation saying, OK, this is a tragedy. Let's put it in context.

And sometimes that happens, but mostly it doesn't.

"If it bleeds, it leads," that's one of the things that the terrorists rely on — and the other thing is if the media didn't publicize these attacks, you can be absolutely certain that ISIS wouldn't be doing it. It doesn't really matter about how many people are being killed. It's about getting those images out there. And they're heartrending images.

What does your recent research show?

We produce something called the Human Security Report, which tracks trends in political violence around the world, their causes and consequences. From the 1940s to the end of the Cold War, there was a steady increase in the number of conflicts and then they went down quite dramatically, until 2010 or 2011. And since then, they've been going up. And more importantly, the number of people getting killed in those conflicts is going up. So there's been an increase of about 600 percent in the number of people killed every year in conflicts and terrorism.

What does that mean for your thesis that the world is becoming a more peaceful place?

This is a thesis that we first articulated in 2005. Since then, [Steven] Pinker wrote his extraordinary book. I think Steven's thesis still holds, because even though the level of violence that we have at the moment is pretty horrendous compared with the 1960s, '70s, '80s — it's relatively small. And it's probably going to get smaller again. So from his point of view, taking in that historical sweep, things are going quite well.

What we would say is we are cautiously optimistic — "cautious" being very, very much the term to bear in mind. There are some real prospects of ISIS being militarily defeated, but unless the regimes change that gave rise to it, we're not going to have stability for a long time. But on the other hand, we see a whole series of trends that really are important. Most of all, as social and economic development increases over time, as states have the capacity to buy off grievances that can lead to conflict and they also have the capacity to deal with insurgencies.

If you look ahead and look at some of the trends, what you actually find from the Peace Research Institute in Oslo, in 2050, other things being equal, there will be a reduction in the number of conflicts being fought around the world. And that's because of the long-term socioeconomic trends. However, and this is where the caution comes in again, there are a whole range of things we can't be absolutely certain about. One is the political and security impact of climate change we're almost certainly going to be seeing between 2030 to 2050 [as temperatures rise]. Nobody knows what's going to happen as a consequence of that. Or if we had another crash of the financial system, that could be another one of these shocks to the system that could disrupt the trend we've been talking about.

Tell me more about the recent increase in people being killed that you've found.

A lot of data sets come up with different results, but all of them are showing an increase from about 2010 or 2011. After two decades of major decline, we have actually seen this extraordinary increase in the number of people being killed over a period of about four years. And in the overwhelming majority of those conflicts, one of the parties is a radical Islamist group. That doesn't mean the radical Islamists are doing all the killing. In fact, Boko Haram is probably No. 1, then ISIS and the government of Syria, and the United States is up there, if you believe what the U.S. is saying about the death toll from their airstrikes. So we've seen a very, very worrying development.

On the less worrying side, it's very, very clear now that ISIS is very much on the defensive in Syria and Iraq and lost a large amount of territory, its financial base; the stream of foreign fighters has dried up dramatically; so for a whole range of reasons, they're not doing too well. Probably the most important reason is normally, it does not make good strategic sense to make gratuitous enemies of countries that you don't have to make enemies of — Jordan, Turkey, Saudi Arabia, the U.S., France and so forth. They've made a whole series of enemies for themselves that they didn't need to make and generated a huge cooperative operation against them. It's been a mess in which ISIS has been losing ground dramatically.

As a consequence of that, it's now lashing out and it's assaulting soft targets and that's what we see in France. And it's a sign of weakness, because their much vaunted caliphate, this idea of creating an Islamic state, if you like, in Syria and Iraq, that's under enormous pressure and that's not going to last. They themselves are now recognizing that they're going to lose their caliphate. The last thing you want to do is create this state for yourself because immediately once you become visible, you can be destroyed. ISIS made itself completely vulnerable by declaring a caliphate in Mosul and Raqqa.

How do you see things playing out?

Terrorist and insurgencies' campaigns nearly always fail. So history contains no grounds for pessimism about ISIS. The percentage of successful insurgencies, depending on how you define such things, is usually between 8 and 12 percent. That means in 90 percent of cases, the insurgents are going to lose sooner or later. And that's something that we need to bear in mind. And when they do [lose], what we should definitely do is change the conditions that gave rise to the insurgency in the first place, to move towards inclusive politics, move towards sustainable development, cut down on corruption and repression. We know what the answers are; it can be very very difficult to get them accepted. But it's not impossible.

This interview has been condensed and edited.