Accessibility links
For Brazil's Women, Laws Are Not Enough To Deter Rampant Violence : Parallels Alexsandra Moreira, a mother of four, was stabbed 21 times by her husband. "Even with all the laws, when everything was done to protect her by the book, we failed," says the prosecutor in her case. 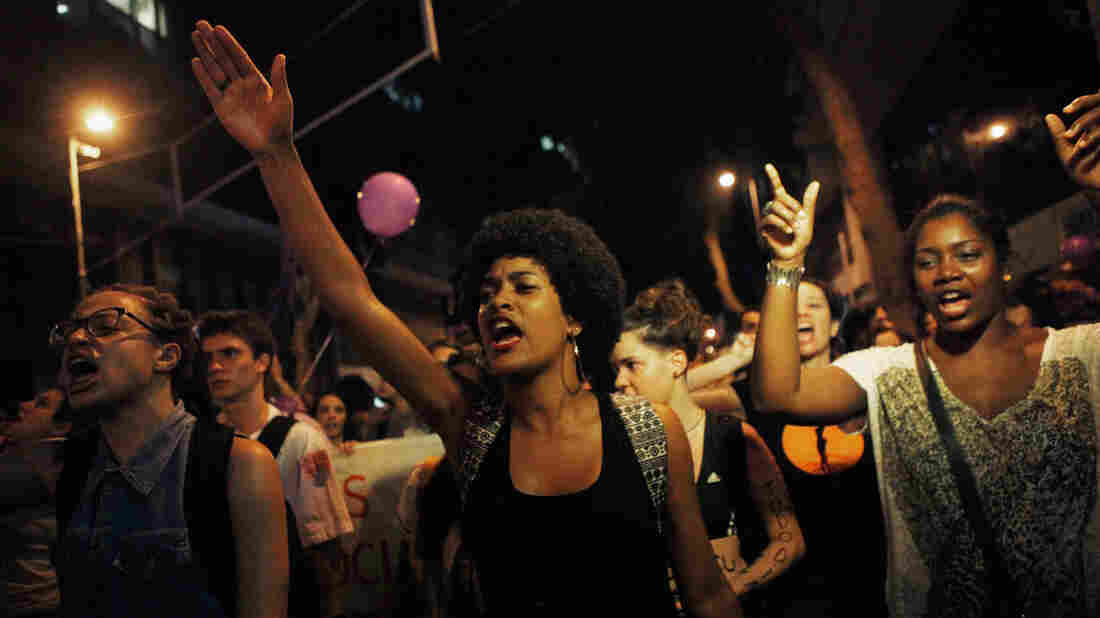 Activists and supporters march on International Women's Day on March 8 in Rio de Janeiro, Brazil. Marchers called for protection from male violence in a country with high rates of murder and assaults of women. Mario Tama/Getty Images hide caption 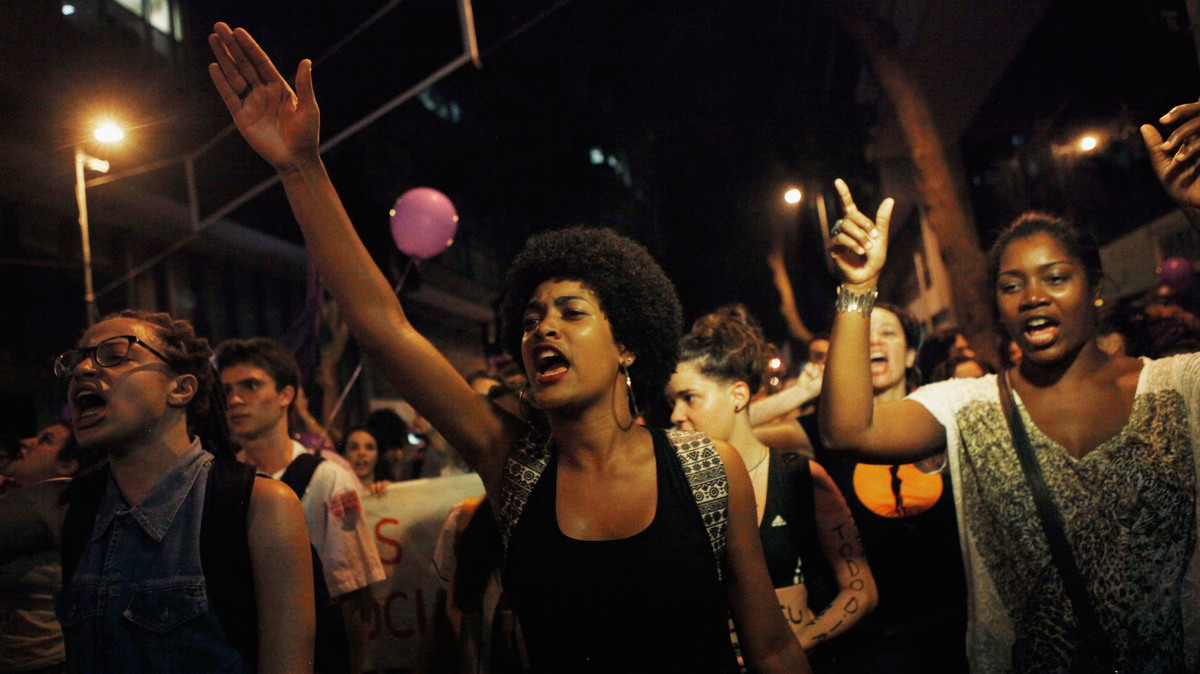 Activists and supporters march on International Women's Day on March 8 in Rio de Janeiro, Brazil. Marchers called for protection from male violence in a country with high rates of murder and assaults of women.

On the day she was killed, Alexsandra Moreira thought she was safe. She thought she had managed to break away and protect herself.

Her brother even escorted her to the bus station that morning to make sure she was OK on her way to work.

"When she got on the bus, my brother told her, 'If anything happens, just call me.' Ten minutes later, his phone rang and it was her. All he could hear was her screaming, pleading for help," Moreira's sister, Andreza da Silva, says.

The bus had just been pulling away when the father of Moreira's four children, Marcos Antonio da Silva, jumped aboard.

"He went straight to where she was. He wanted her to get off but she refused. They started fighting and she said she wouldn't go with him. That's when he pulled out his knife. He stabbed her 21 times," Silva says.

The country hosting next month's Olympic Games is one of the most dangerous places in the world to be a woman. In Brazil, a woman is killed every two hours and assaulted every 15 seconds – often by someone she knows — according to a report from the nonprofit Mapa da Violencia. In particular, gender violence has skyrocketed in the northern Brazilian state Rio Grande do Norte, where Moreira's hometown of Natal is located. According to the Observatory of Violence for the State Council on Human Rights, violence against women in the state has grown 39 percent in the last four years. One hundred and twenty women were murdered in the state in 2014.

In a picture Silva shows me of her sister, Moreira is sitting on a bed, her long, dark hair framing her smiling face.

Silva says her sister had been with the man who ended up murdering her for 18 years. But the family didn't know her secret life for most of those years.

"Sometimes we'd see her with a bruise or a mark, and she'd tell us that one of the kids had bitten her or some other excuse," Silva says. "She never told us. It was only when she finally left him that she confessed that he beat her and her children."

He beat her savagely, cutting her, tying her up. 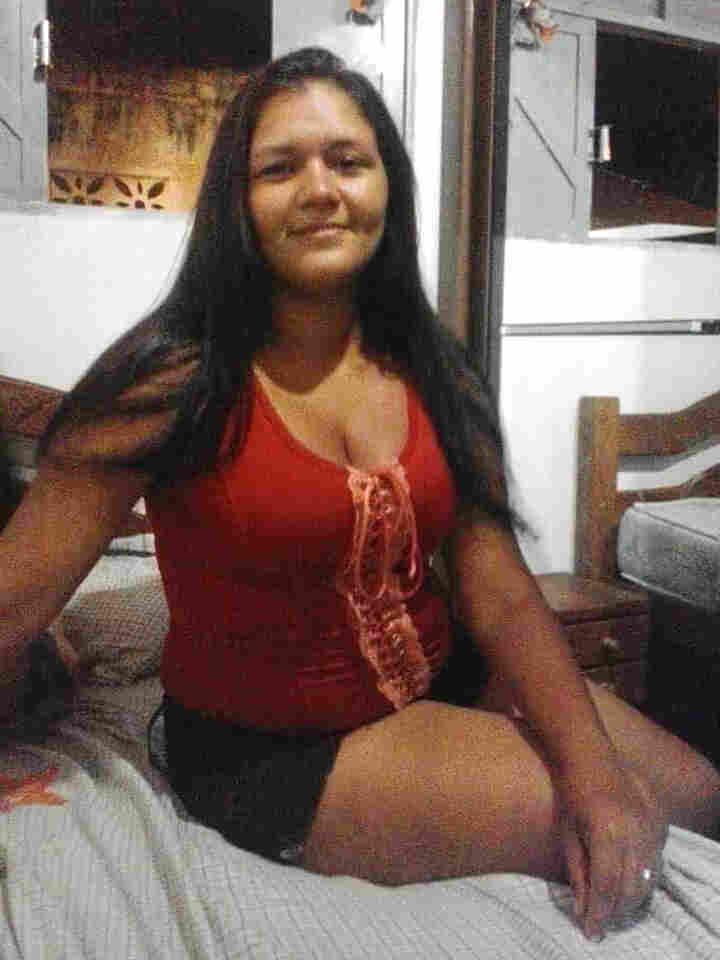 Alexsandra Moreira was 32 when she was murdered in Natal by the father of her four children. Courtesy of Andreza da Silva hide caption 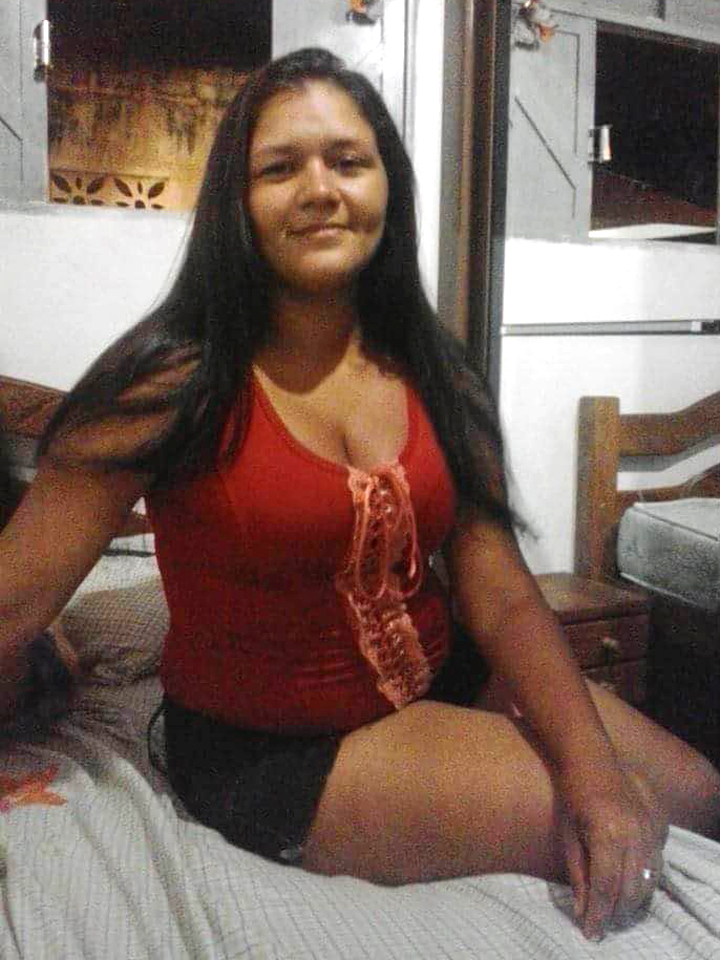 Alexsandra Moreira was 32 when she was murdered in Natal by the father of her four children.

"He would tell her if she ever said what was going on, he would kill her, the children and our parents. She was afraid. She lived 18 years with him in terror," Silva tells me.

But one day, Moreira had enough. Her husband had attacked her at the Natal supermarket where she worked, bashing her head. She reported him to the police and was taken into a woman's shelter for victims of domestic violence, called a casa abrigo (shelter house) in Brazil.

He found out where it was and showed up. The shelter asked for a restraining order against him but the court didn't grant one. So Moreira was asked to leave, and she went to stay with her parents.

Her sister's husband became relentless, Silva tells me. He would show up outside the house and threatened that if she didn't come back to him, he would kill her.

She and the family asked for help, but the police did nothing. The neighbors said nothing.

She thought he would eventually leave her alone. But on that December morning in 2015, he finally made good on his threats — murdering her in plain view. She was 32.

"Why do you think this happened?" I ask Silva.

"The men here think that if you are with a woman, you own her," she tells me.

Latin America is the continent with the highest number of murders of women in the world. In most countries of the region, including Brazil, there are specific laws against femicide and violence against women generally to deal with the epidemic.

But those laws haven't been working.

Ana Cláudia Mendes, who directs the state's department for the combating of violence against women, says there are many reasons for the spike in violence in that region.

Murders generally are up in northern Brazil, as drug and gang violence takes its toll amid a security crisis. New laws have not deterred violent crime, with police and the courts failing to follow through. A lack of budget and facilities to protect women only makes things worse.

In Natal, there is just one women's shelter — where Moreira tried unsuccessfully to hide from her husband.

We are allowed to meet some of the women who are sheltered in that same casa abrigo. We agreed not to use their names for their protection.

The first woman is 26. She tells me she met the man she is now hiding from when she was just 15. She had a child with him when she was 17. He would rape her. Hurt her. She says she felt she had no options. He never let her work because he thought she would find someone else.

She told people what was happening, but even her family said it was better for her to have a man, even a bad one, than not. People see domestic violence as normal here, she says.

She cries as she tells me her dream is to one day be able to support her son.

For another woman at the shelter, the root of this crisis of violence against women starts in the home — from the mothers.

"You see, people tell their sons that they shouldn't do a specific activity because it's woman's work. Boys are allowed to run and play, while girls are taught to cook and clean. It teaches us to be submissive, to be subjugated," she says.

"I [hear] teenage girls talk all the time about how they won't go somewhere because their boyfriend won't let them," she says. These attitudes start very young.

She tells me even while her husband abused her, she was expected to work all day and then clean and cook when she got home — even though her husband wasn't working. She says the abuse got worse after she went back to school to get a university degree.

Brazil has had a female president and high numbers of women are in the workforce. Similar to trends across Latin America, women in Brazil have become better educated and have reached higher levels of employment in the past decade.

But this abused woman says the fact that she worked and was getting a university degree made her husband insecure, pushing against his sense of entitlement.

Our last stop was to see Érica Veras, the prosecutor handling Moreira's case.

"I went to Alexsandra's funeral," Veras says. "The children were throwing themselves on the coffin. 'Don't go, mother, don't go,' they screamed."

Veras tells me she is still haunted by this. She blames the system for Moreira's death.

"How did we lose that victim? Why did the system fail to protect her? For me, it was emblematic. Even with all the laws, even when everything was done to protect her by the book, we failed," she says.

Then she shows me a diary entry that Moreira wrote at the women's shelter, when she finally thought she had broken free.

The handwriting is neat and the entries are brief, as if she was struggling to find the words.

The first page is titled: "The first day of a new life."