Accessibility links
A Summer Of Terrorism Points To The Limits Of Counterterrorism : Parallels The recent series of major terror attacks — from Orlando to Istanbul to Nice — have exposed some uncomfortable truths about the limits of counterterrorism. 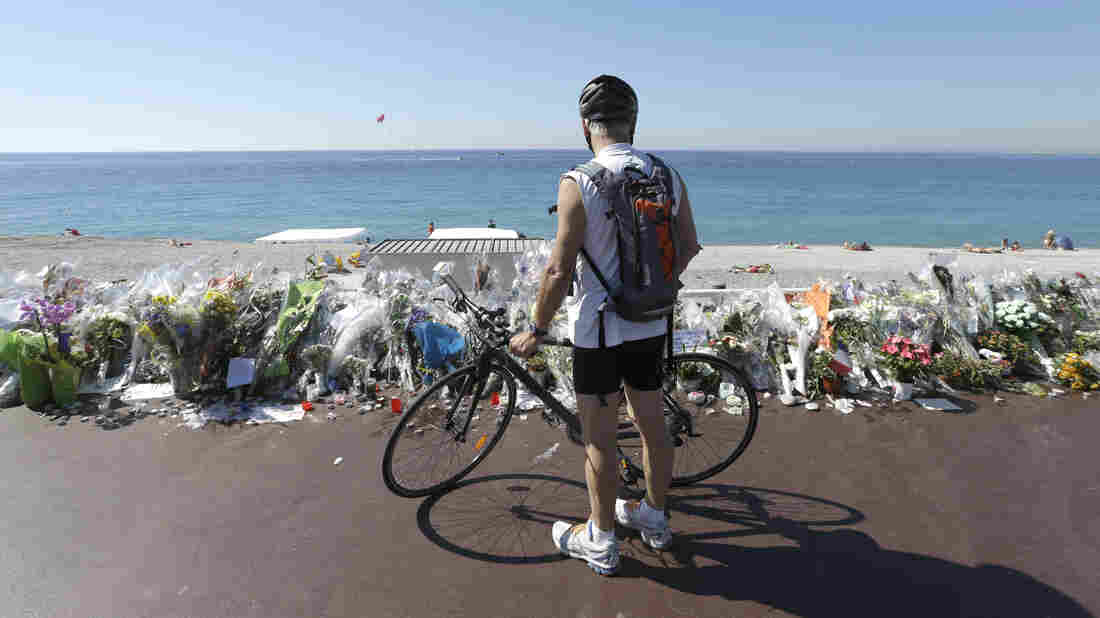 A cyclist looks at the flowers and messages placed along the beach for victims of the recent terrorist attack in Nice, France, on Wednesday. The recent spate of attacks around the world has raised questions about the limits of counterterrorism. Claude Paris/AP hide caption 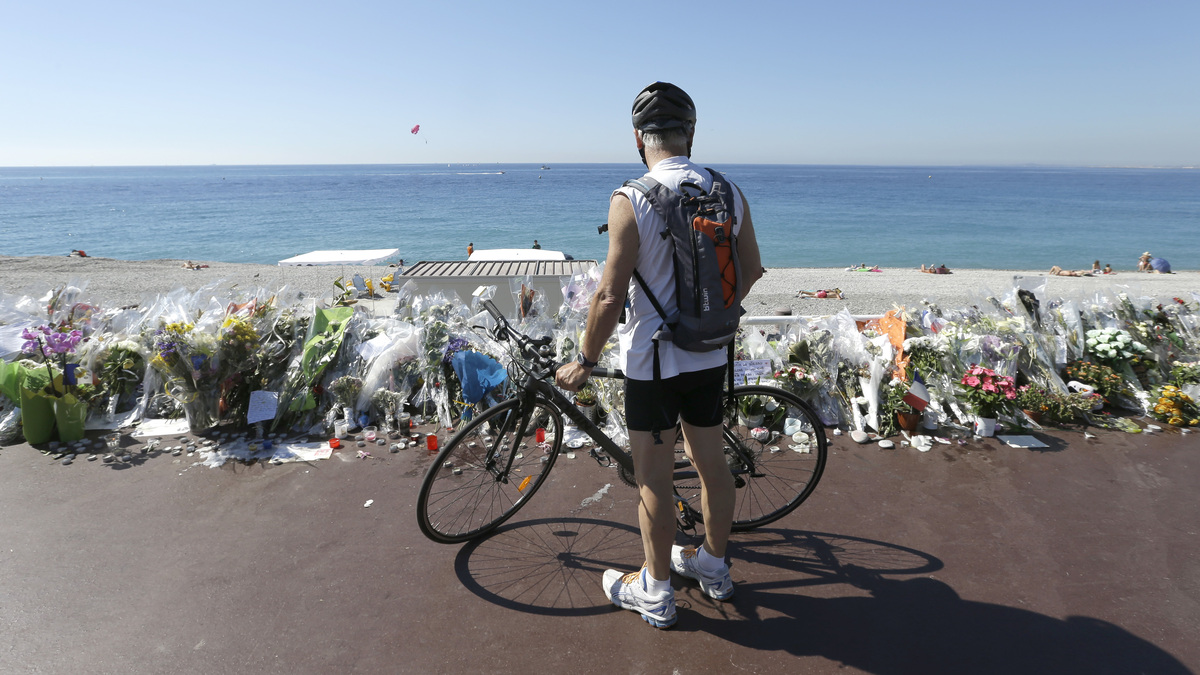 A cyclist looks at the flowers and messages placed along the beach for victims of the recent terrorist attack in Nice, France, on Wednesday. The recent spate of attacks around the world has raised questions about the limits of counterterrorism.

The summer is barely halfway over, and already major terror attacks have unfolded across the globe.

It's hard to make sense of carnage on that scale, or to feel anything but powerless in the face of so much death and destruction. The massacres this summer range from the nightclub attack in Orlando, Fla., to bombings in Baghdad and Istanbul, to the truck driver who mowed down a crowd in Nice, France, to the gunmen who filled a restaurant in Dhaka, Bangladesh, with gunfire.

Bruce Riedel, a former CIA counter-terrorism official now at the Brookings Institution, says his takeaway on the state of global terrorism is that "it is attracting sufficient recruits to be able to stage almost daily acts of horror around the planet."

Riedel says the almost-daily attacks are part of a calculated, long-term strategy to create the impression of a world in chaos, "and a world that's ripe for their argument that jihad is the solution to the problems of the Muslim world."

Asked whether any of this summer's attacks represent a game-changer, Riedel and others point to France. The man who rented a truck, plowed it into a crowd gathered to watch fireworks on the boardwalk in Nice, and killed 84 people.

Patrick Skinner, director of special projects with the with national security consultants The Soufan Group, says the Nice attack was so troubling because of its simplicity, its crudeness. He says law enforcement and intelligence officers are trained to spot unusual travel, unusual communications and unusual purchases.

"If you buy a lot of fertilizer, someone might pay attention," he says. "This wasn't a truck bomb. It was a truck. It's not even under the radar. It's invisible."

Skinner, who served as a CIA case officer in the Middle East, says it's almost — almost — enough to make you miss the days after 9/11, when he and others at CIA headquarters were hunting down al-Qaida, a terror group they could map.

"We had org charts," he says. "We literally had org charts that said, 'Hey, here's the number three in al-Qaida. Well, there is no org chart for everybody on the Internet."

That sums up the challenge posed today by the Islamic State and other extremist groups: through social media, they are recruiting around the clock.

In a conference call with reporters a few days ago, Brett McGurk, the White House point person on ISIS, talked about the importance of contesting ISIS messaging in cyber space.

McGurk says the U.S. strategy is to fight in "three dimensions." They include defeating the eight or so ISIS affiliate groups, from Libya to Afghanistan. Secondly, targeting fighters and propaganda networks. And, targeting the core group in Iraq and Syria.

McGurk defines the goal: "Shrinking and basically working to eliminate this phony caliphate [Islamic state]. So in the core in Iraq and Syria, working to take back territory. That's a military focus."

McGurk says it is working, and that ISIS has lost almost half the territory it once held in Iraq, along 20 percent of its ground in Syria. He and others in the Obama administration argue this is linked to the onslaught of attacks abroad — that battlefield setbacks at the core are driving ISIS to prove it's still relevant and successful elsewhere.

Matt Olsen buys this argument, to a point. Olsen was director of the National Counterterrorism Center from 2011 to 2014. He acknowledges the disconnect between military gains against ISIS, and the group's ongoing ability to stage attacks.

"We could completely defeat ISIS militarily, and we could still have attacks like we have seen in Orlando or Nice," says Olsen. "We've had terrorism forever, right? So over time, we have to make it so that we're able to really prevent people from being radicalized. And that's what we're not doing now."

Preventing people from being radicalized in the first place is a priority, but it's also a long-term proposition. That exposes an uncomfortable truth about the limits of counter-terrorism.

"Nobody can say that these attacks are going to stop," says McGurk. "Unfortunately, I think we're going to see more."